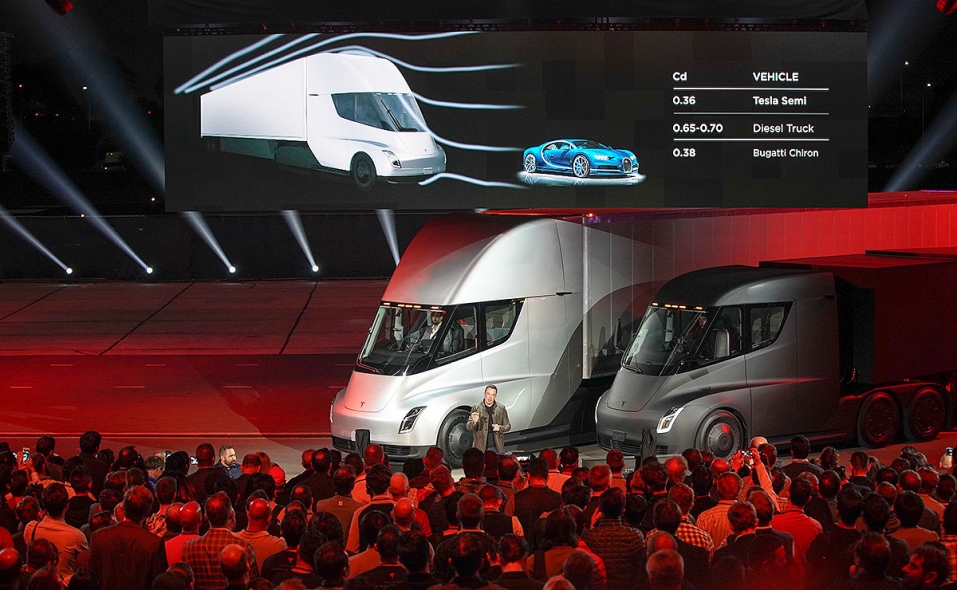 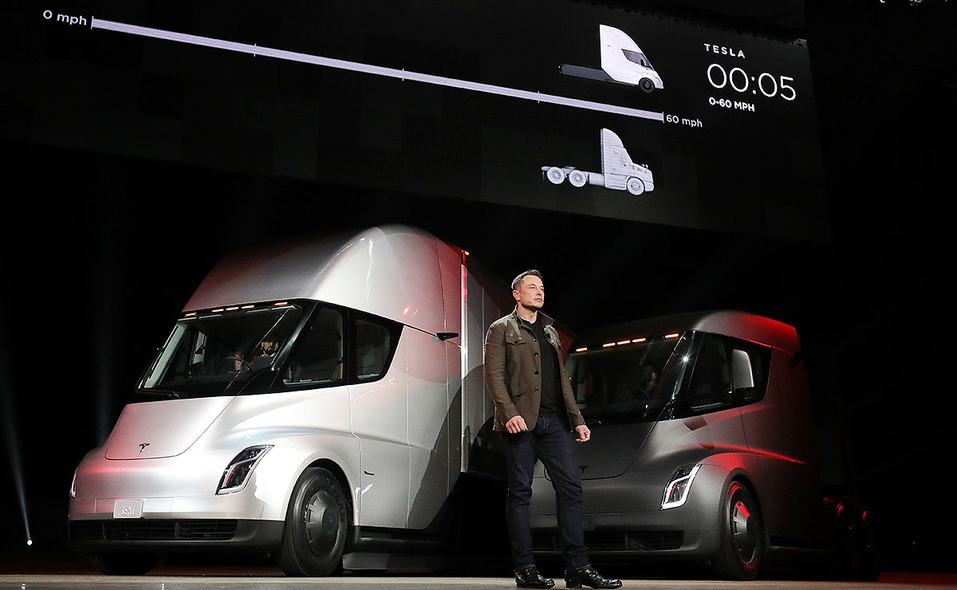 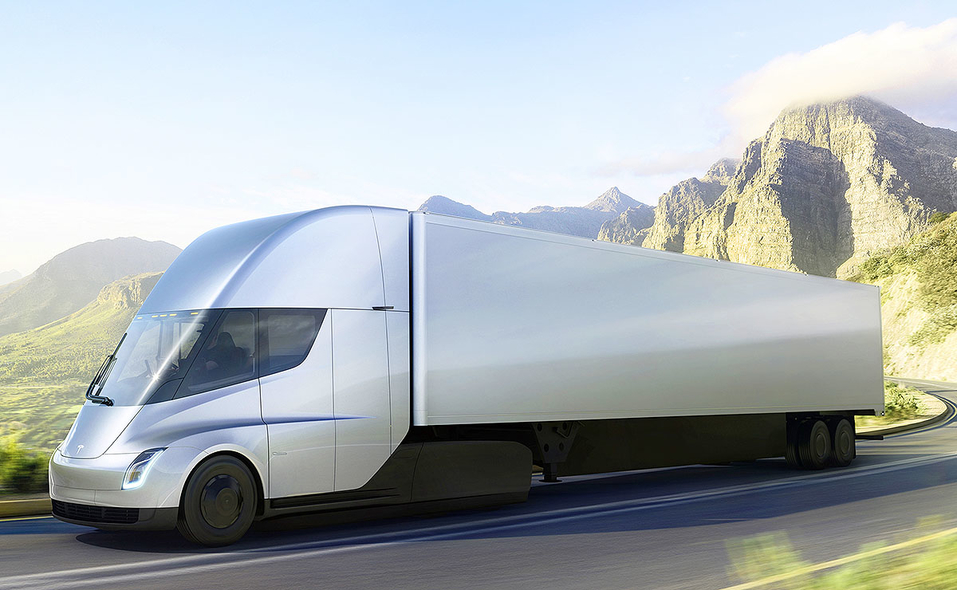 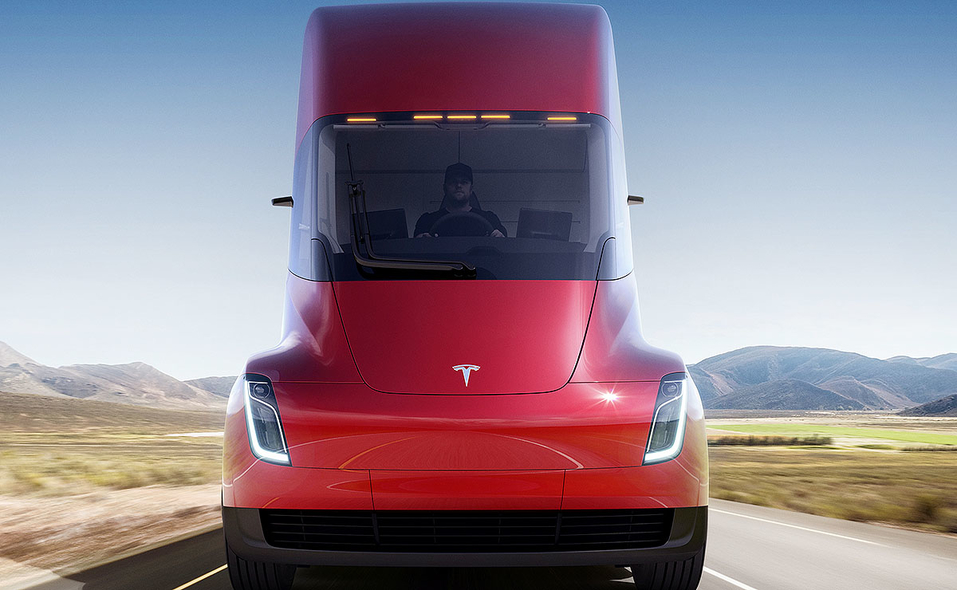 Tesla hopes to convince the trucking community that it can build an affordable electric big rig with the range and cargo capacity to compete with relatively low-cost, time-tested diesel trucks.
Share 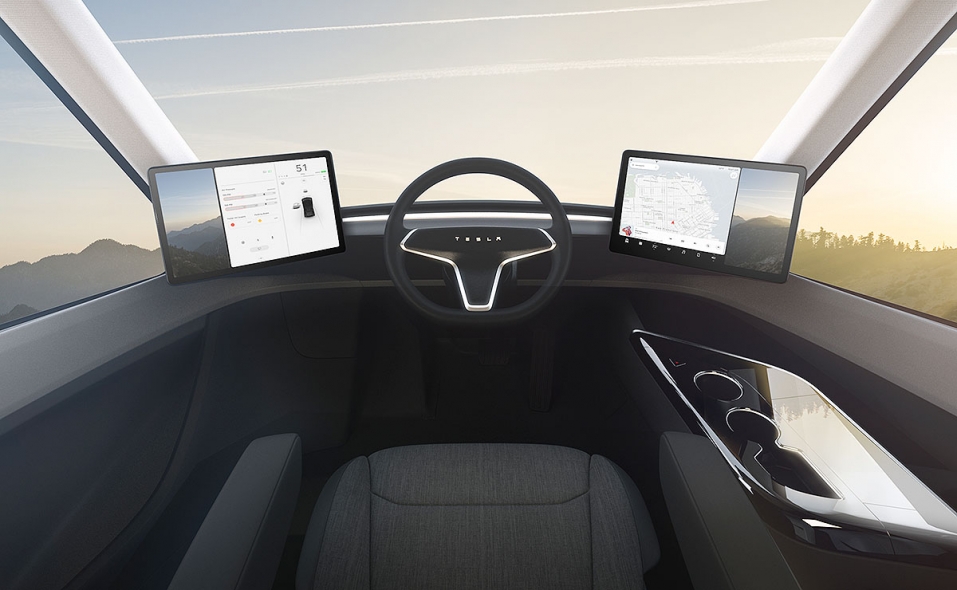 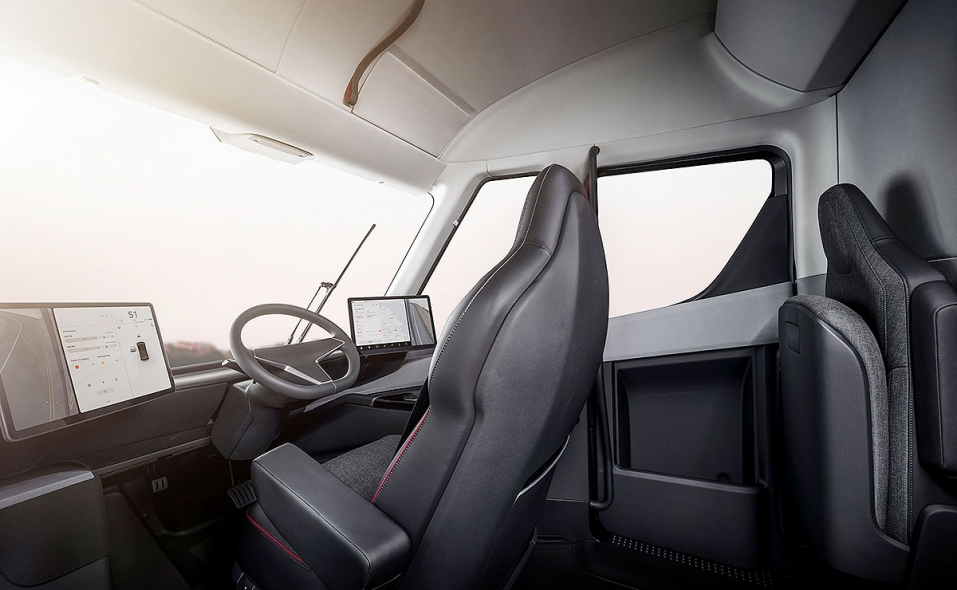 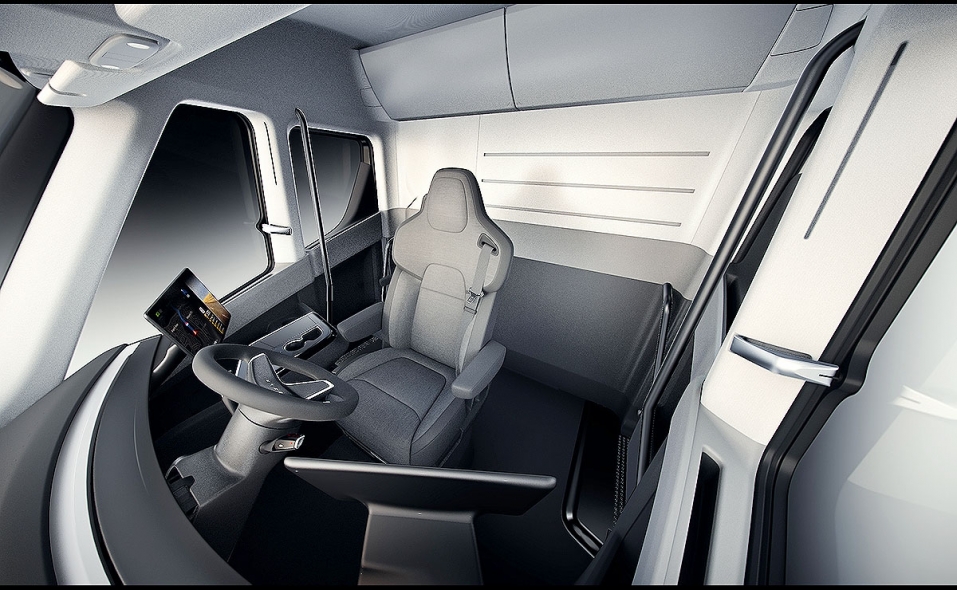 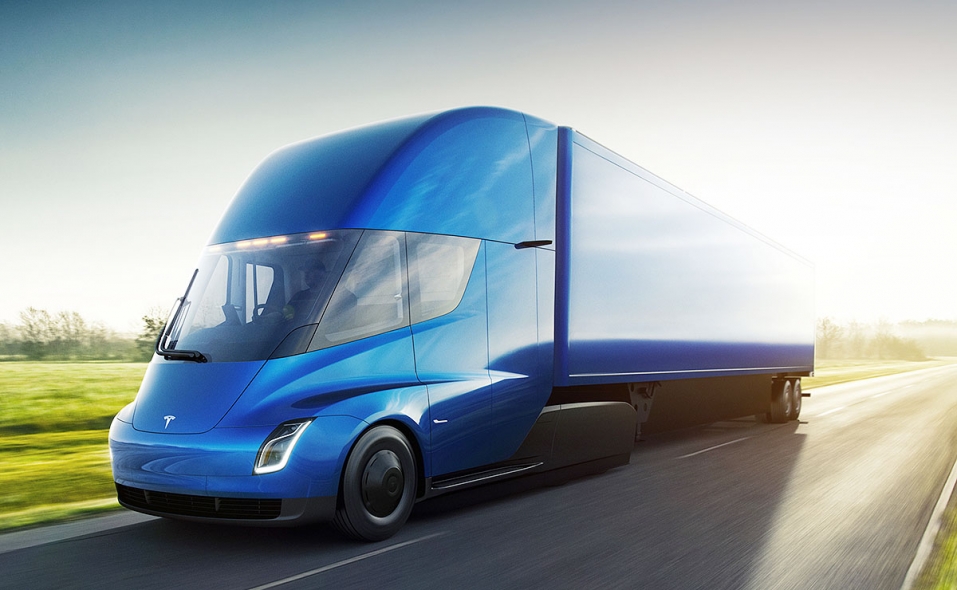 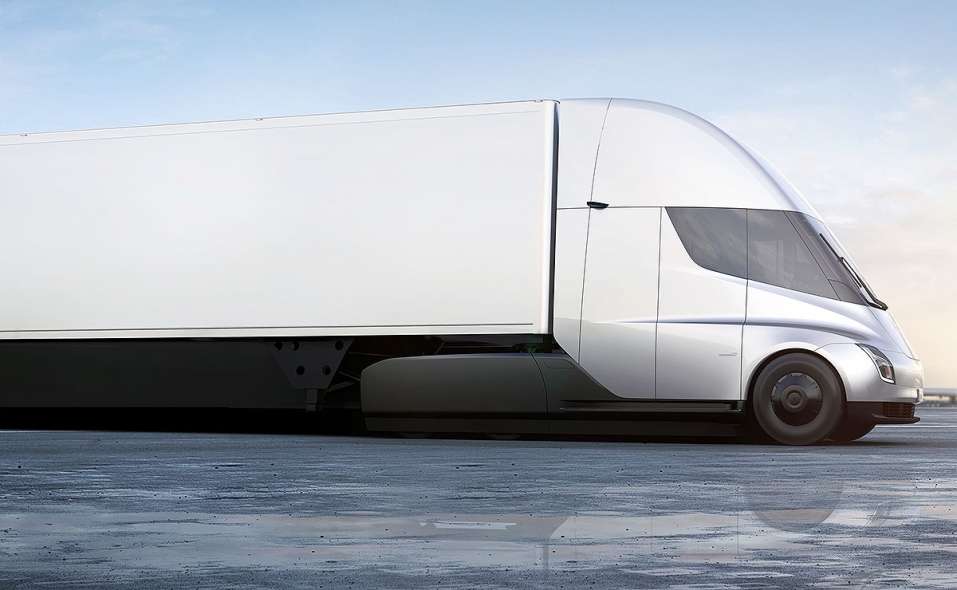 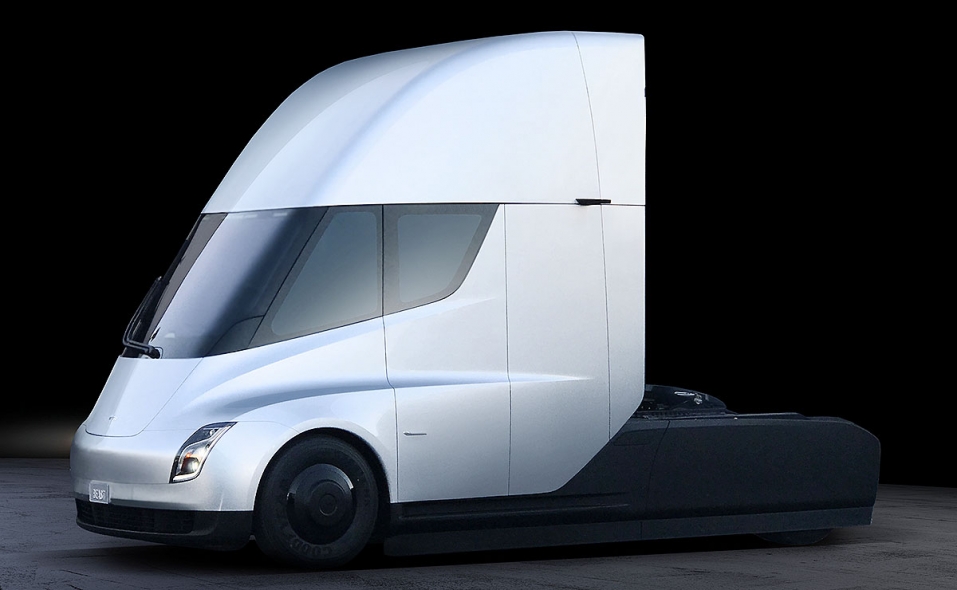 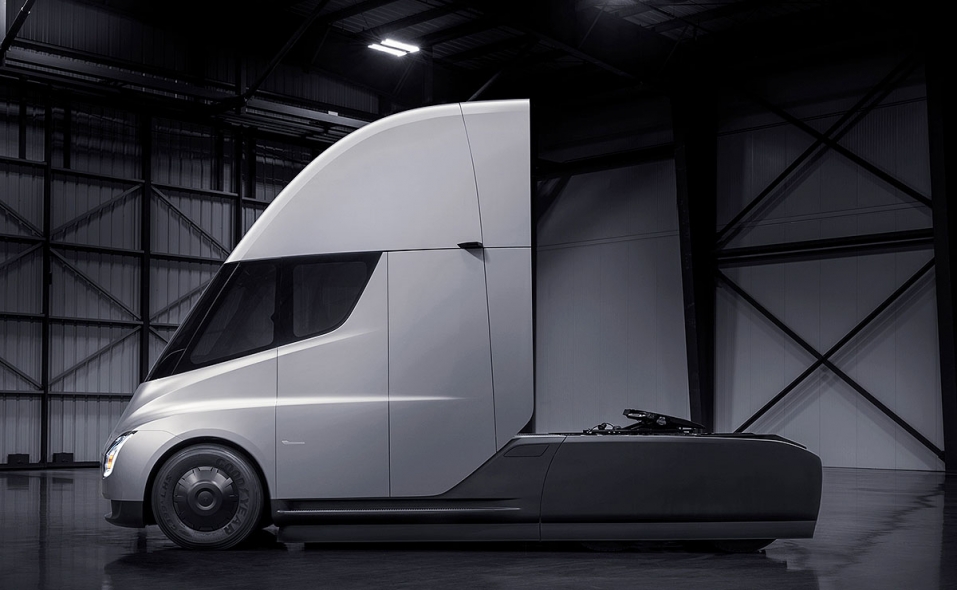 HAWTHORNE, Calif. -- Tesla Inc., undeterred by its widest quarterly loss in history and Model 3 production delays, formally set its sights on disrupting the commercial truck market Thursday with the unveiling of an all-electric semi.

A prototype of the Semi was driven and introduced by Tesla CEO Elon Musk before hundreds of journalists, Tesla faithful, potential truck buyers and investors at an airport hanger here.

"I can drive this thing and I have no idea how to drive a semi," Musk joked.

The Semi -- currently in the prototype stage -- has a range of 500 miles at full load and highway speeds, Musk told the crowd, and can reach 60 mph from zero in 5 seconds.

It shares a number of components with the Tesla Model 3 sedan to keep costs down.

Pricing wasn't released but Tesla said reservations for the Semi can be made for $5,000 per truck, with production slated to begin in 2019.

Ahead of the introduction, Tesla executives showed off the Class 8 truck to journalists, describing it as "trailer agnostic," or capable of hauling any type of freight. Class 8 is the heaviest weight classification on trucks.

The truck is powered by four independent electric motors that are identical to those in Tesla's Model 3 sedan -- two motors on each of the truck's two rear axles. Each motor controls a specific wheel; the truck can route power accordingly depending on traction and load though the function is automated by the truck and not configurable by the driver.

Tesla also says the system can work to prevent jackknifing by applying positive or negative torque to specific wheels and or inducing braking.

The battery packs sit between the front axle and the first rear axle. Unlike the motors, the packs aren't pulled from Tesla's consumer vehicles but instead are "industrial cells."

Tesla said it will guarantee the truck's drivetrain, which delivers power to the wheels, for 1 million miles.

Like any electric vehicle, a key component of the Semi is aerodynamics.

The cab is pushed forward relative to a standard semi today. The driver sits in the middle of the cab, allowing Tesla to keep the cab at that spot as narrow as possible for better aerodynamics; a jump seat sits just behind the driver to their right. A pair of Model 3-sources touchscreens flank the steering wheel and are fixed in position.

At the front of the Semi is a small storage compartment -- what Tesla and its owners lovingly refer to as the "Frunk" in light vehicles. The truck boasts a full array of Tesla's Autopilot semi-autonomous capability, all of which is derived from its other models.

Tesla said the Semi can also travel in a convoy, where one or several Semi trucks will be able to autonomously follow a lead Semi.

Tesla is not the only company looking into the electrification of commercial trucking. Daimler, Cummins and Bosch have all revealed electrified semi trucks that they're developing for deployment around or just after the end of the decade.

"Tesla will be up against some formidable challengers, Daimler being one which knows this market well and already has customer trust and loyalty," Michelle Krebs, executive analyst for Autotrader, said ahead of the Semi's reveal.

The Semi reveal also comes at a precarious time for the EV maker and it has raised questions about why the company would choose to get into long-haul trucking when it already has so much on its plate.

Tesla posted a third-quarter loss of $671 million, its largest quarterly loss ever. The company also disclosed that plans to ramp up weekly output of the Model 3 by up to 5,000 units -- the car upon which much of the company's survival has been pegged -- will be delayed three months until the end of the first quarter in 2018.

The setbacks have raised the likelihood that Tesla will need to raise more cash in 2018 to get production of the Model 3 up to scale and promised levels.

Tesla is also grappling with a lawsuit filed by a former employee at the company's Fremont, Calif., factory. The class-action suit alleges a culture of racist behavior, a claim Tesla has vigorously denied.

Tesla revives Roadster with a range of 1,000 km

Michigan retail chain in shadow of Detroit 3, others bet early on Tesla Semi

GM, Ford must convince investors they can profit as prices fall