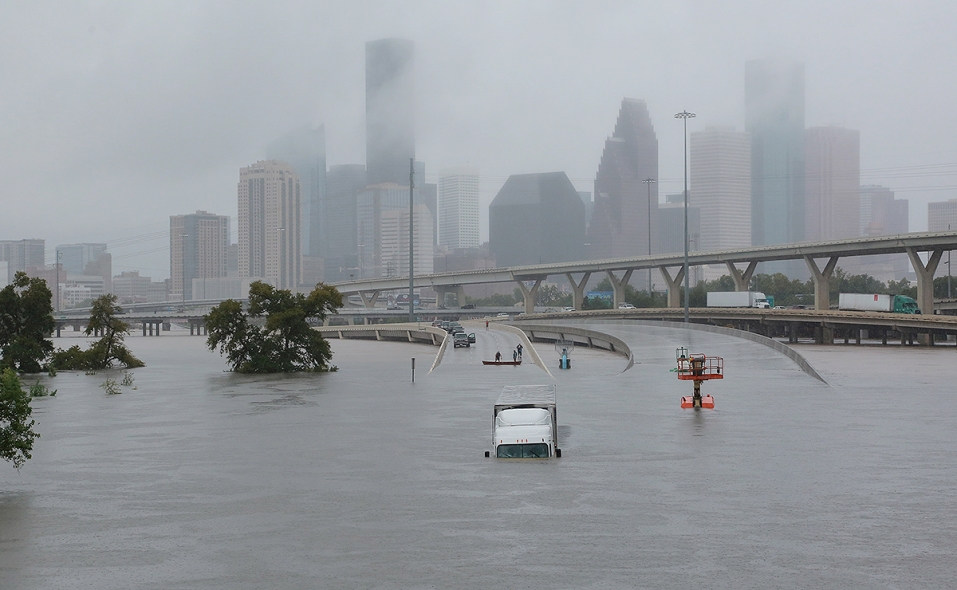 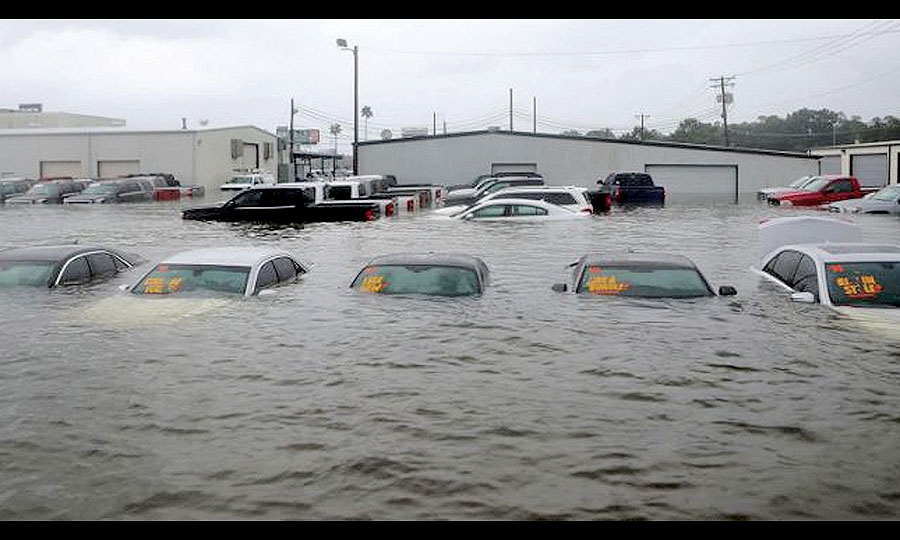 On dealership lots, some vehicles were only partially submerged.
Share 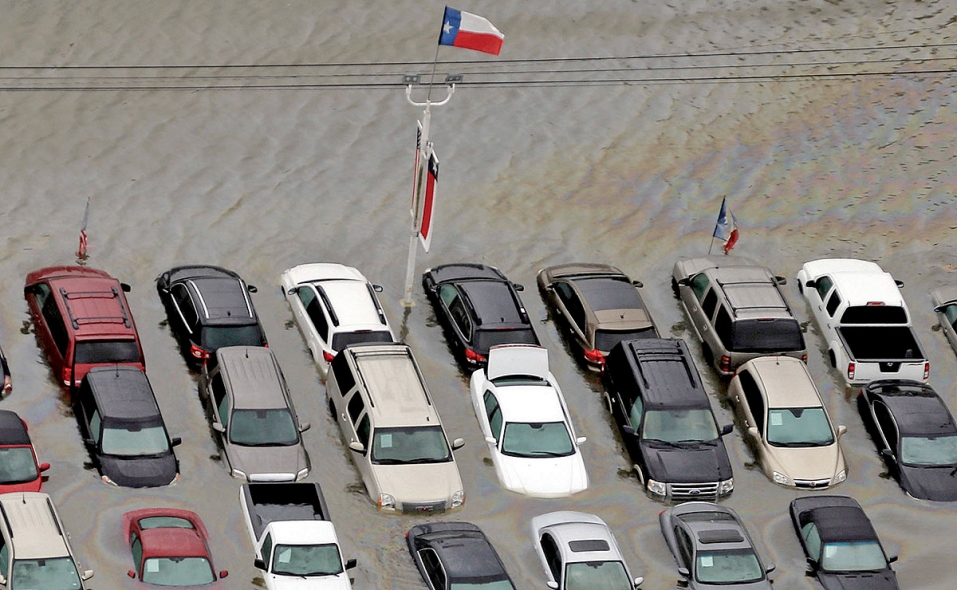 Even vehicles that were only slightly waterlogged may be in worse shape than those similarly soaked by Hurricane Katrina 12 years ago, because of the greater amount of water-susceptible electronics in today's vehicles.
Share 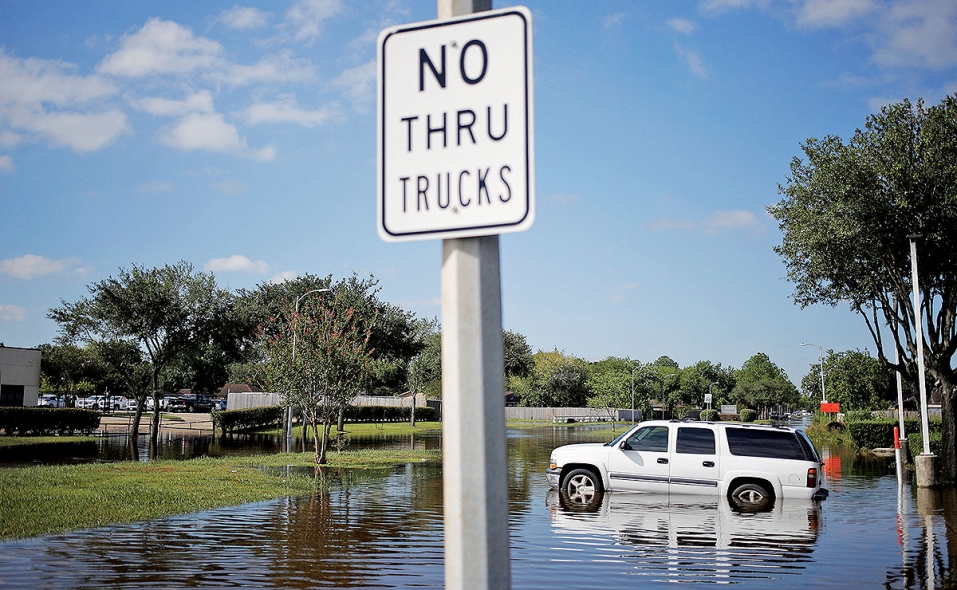 Floodwaters made much of the stricken region, larger than New Jersey, impassable.
Share 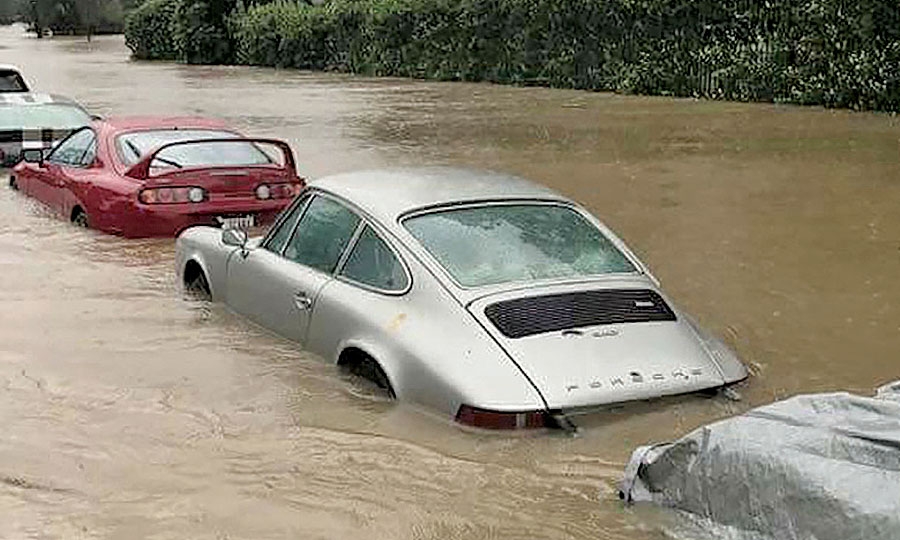 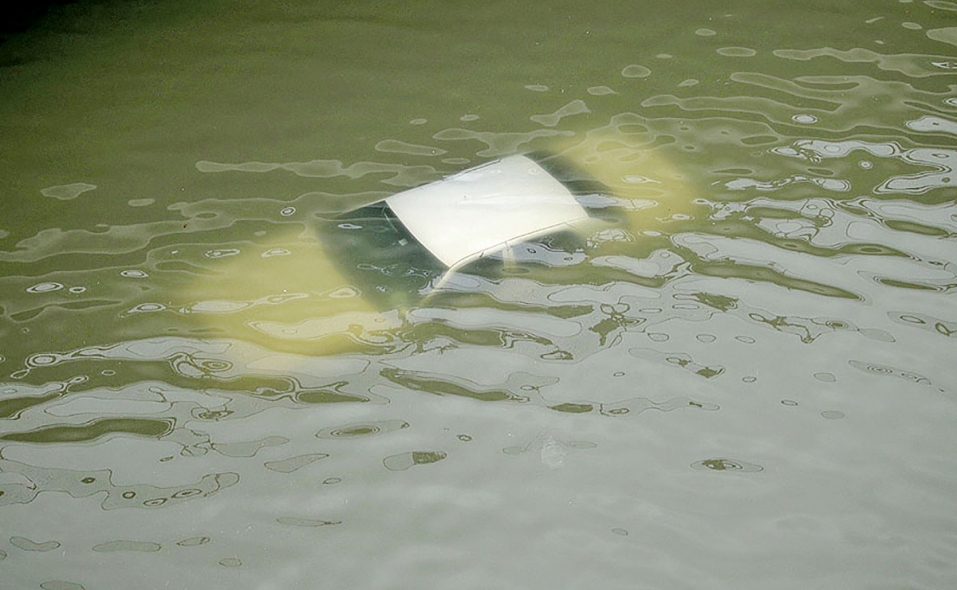 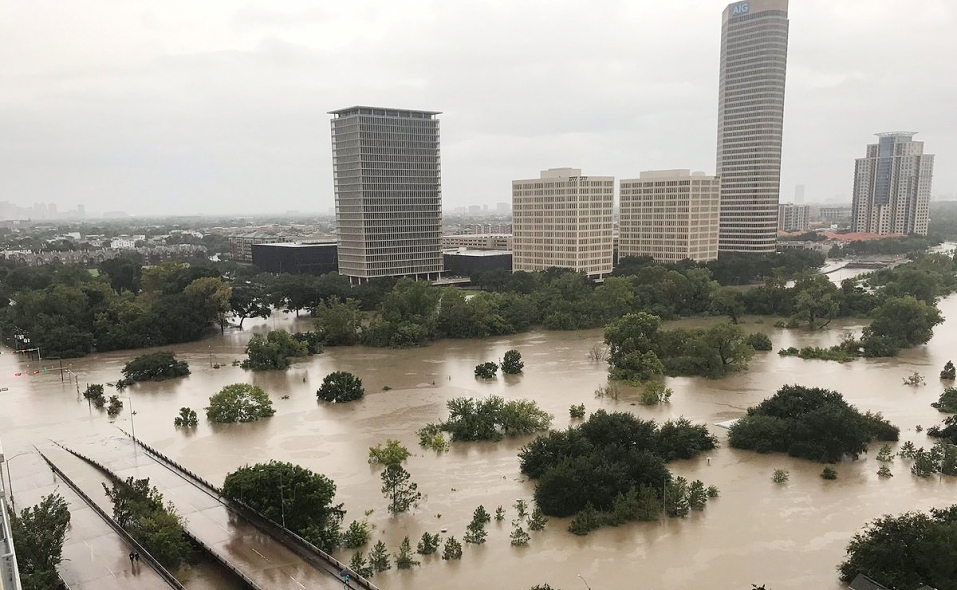 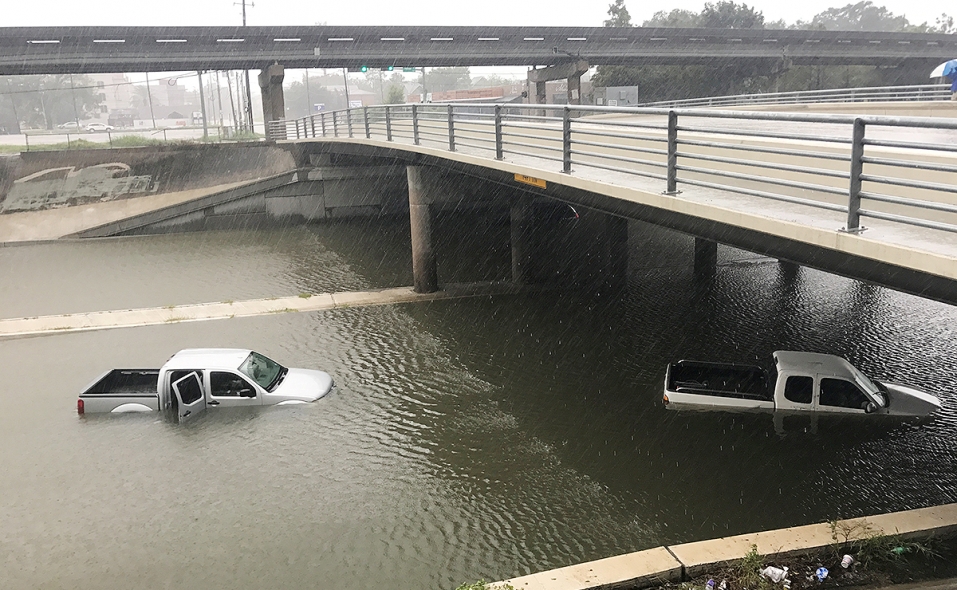 REUTERS
Vehicles sit half submerged in flood waters under a bridge in the aftermath of Hurricane Harvey on August 27.
Share 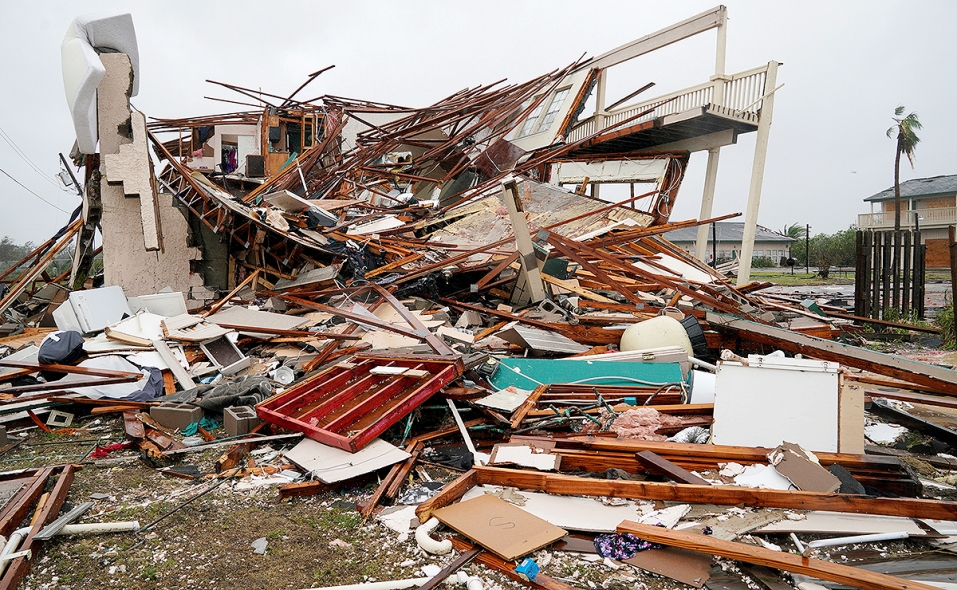 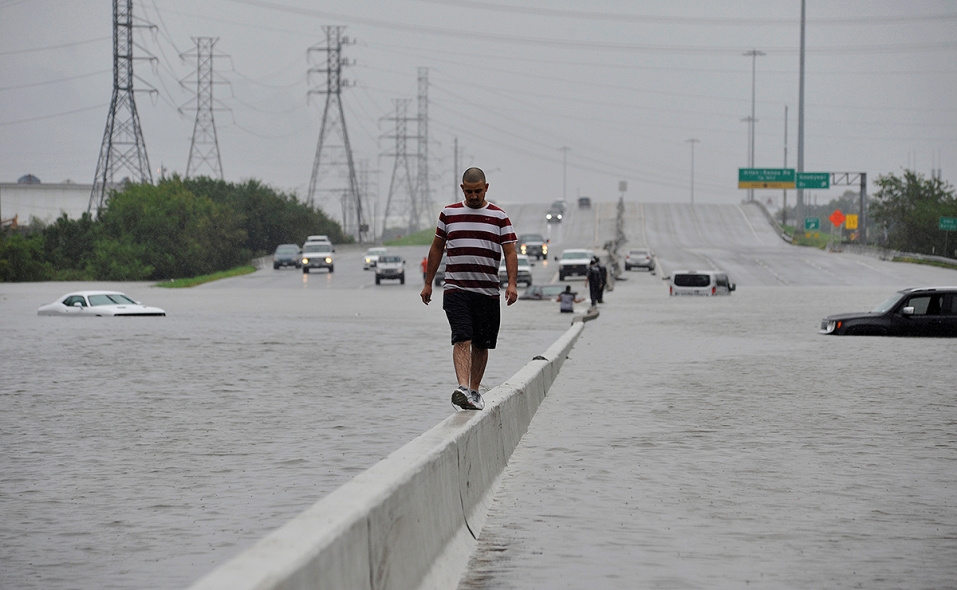 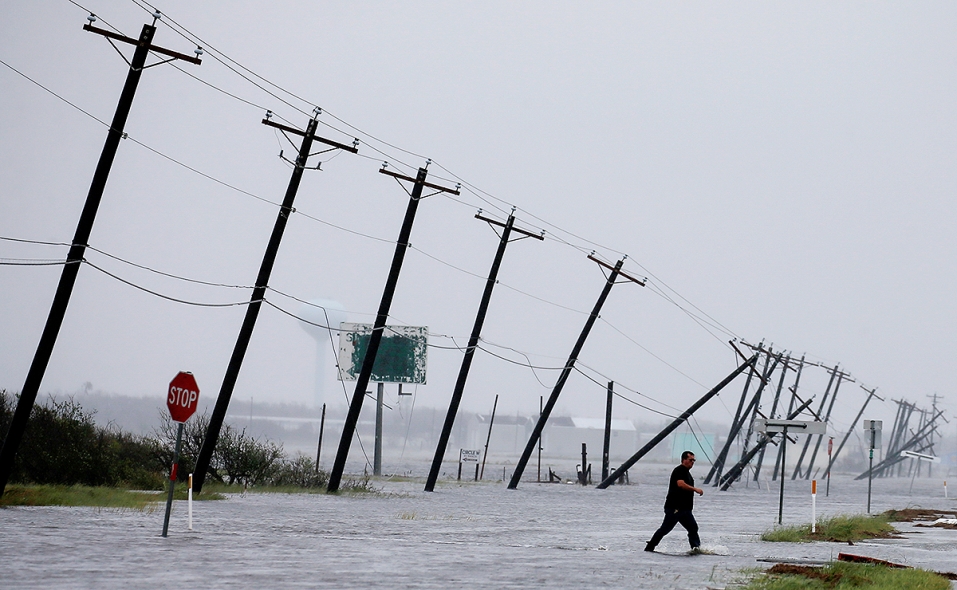 REUTERS
A man walks through floods waters and onto the main road after surveying his property which was hit by Hurricane Harvey in Rockport, Texas.
Share 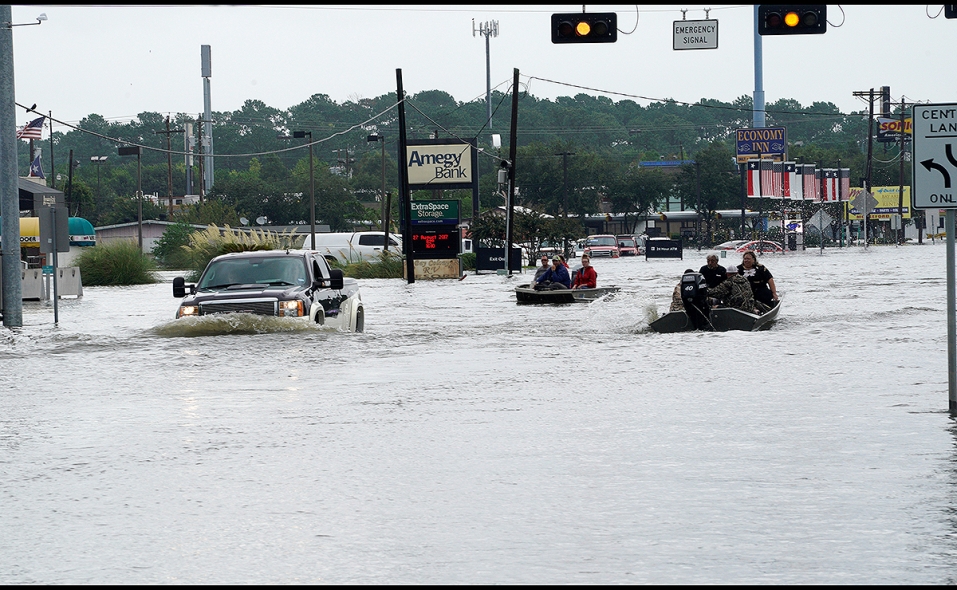 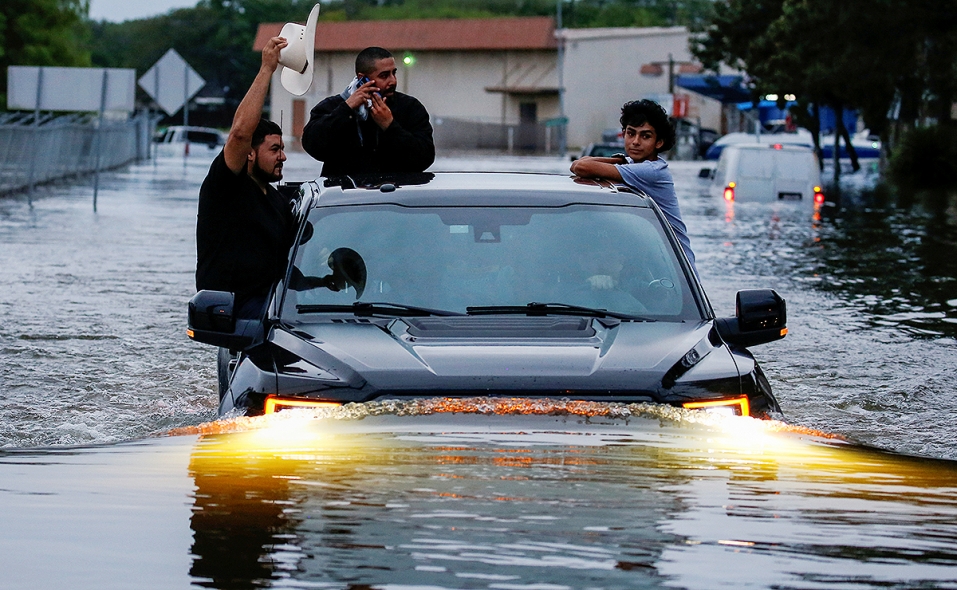 REUTERS
Residents use a truck to navigate through flood waters from Tropical Storm Harvey in Houston, Texas on August 27.
Share 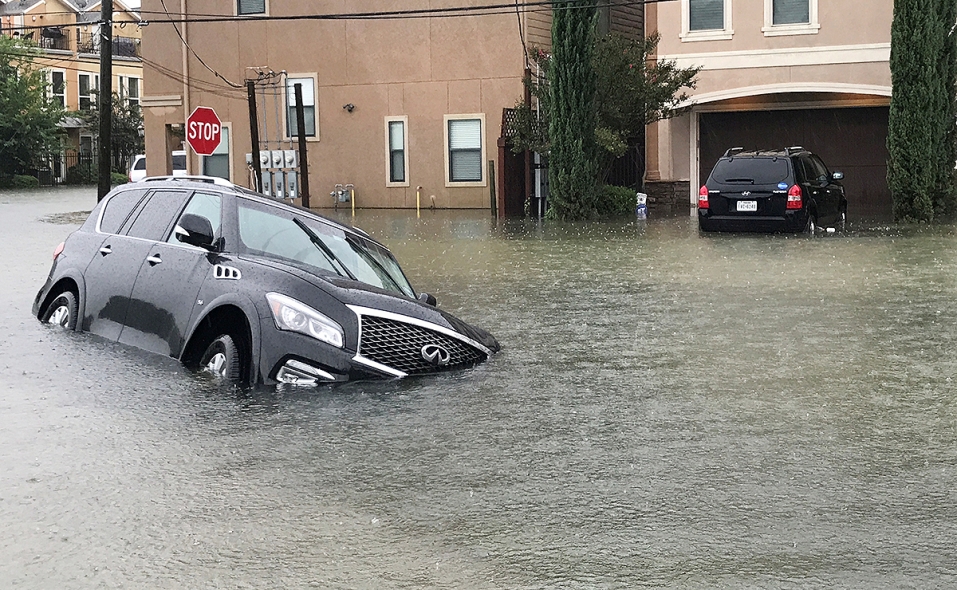 REUTERS
A vehicle sits half submerged in flood waters in a residential area.
Share 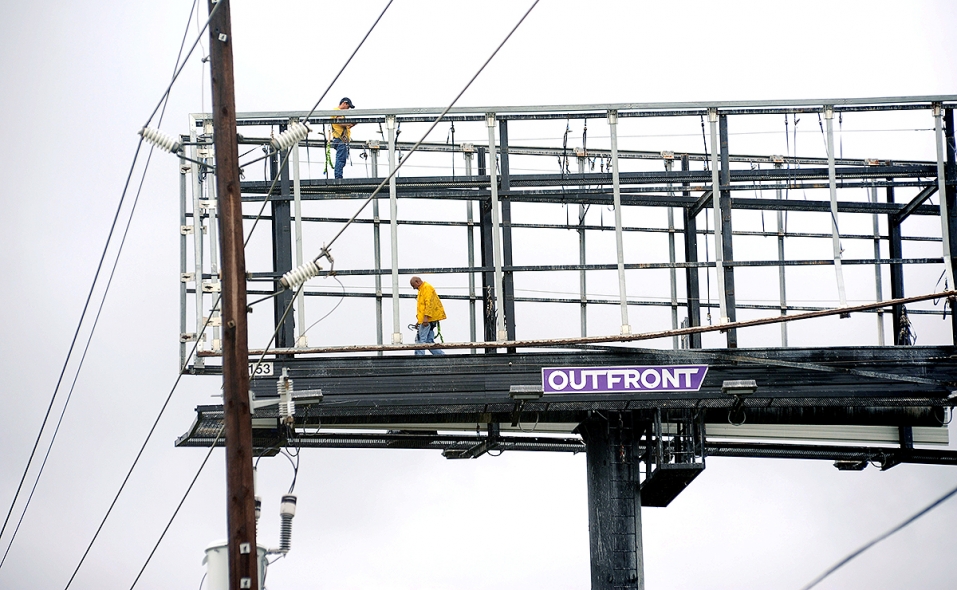 REUTERS
Workers look over a billboard that was damaged by a tornado that spun off of Hurricane Harvey after the storm made landfall on the Texas Gulf coast, in Katy, Texas.
Share 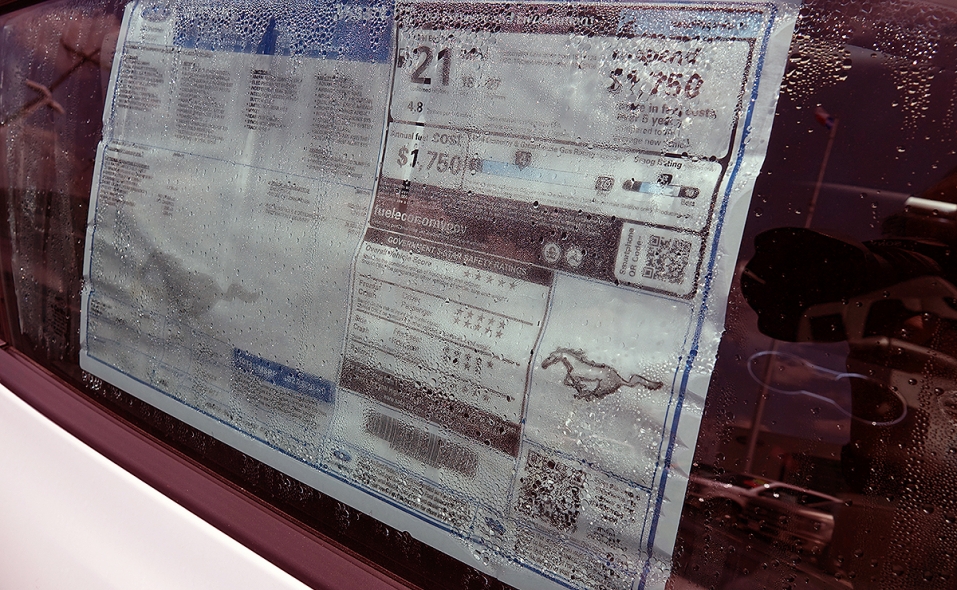 A soggy window sticker at McRee Ford in Dickinson, Texas, shows just how much water there was. Dickinson is about 30 miles south of Houston.
Share 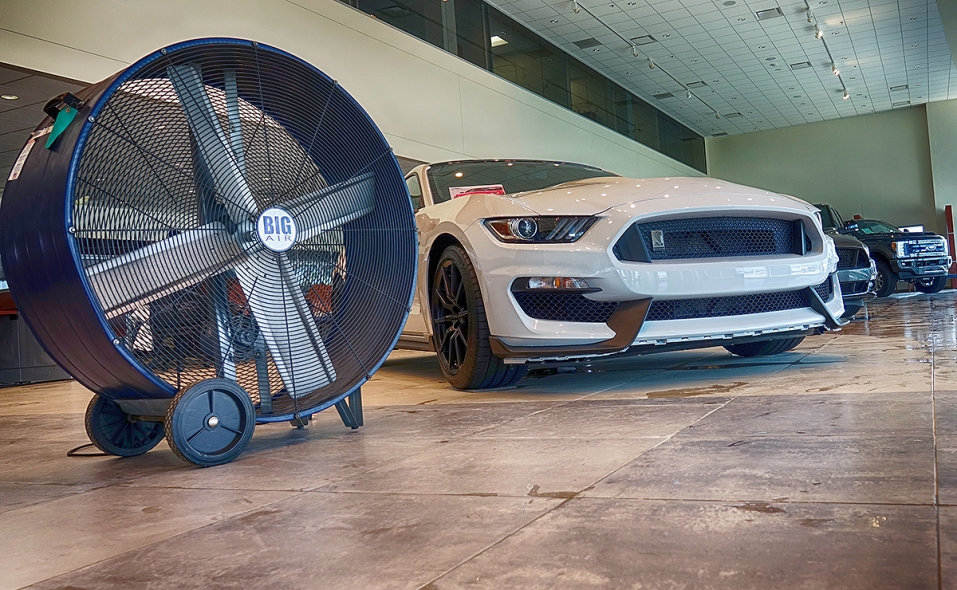 Fans were set up in the showroom floor of McRee Ford in Dickinson, Texas, to help with drying.
Share 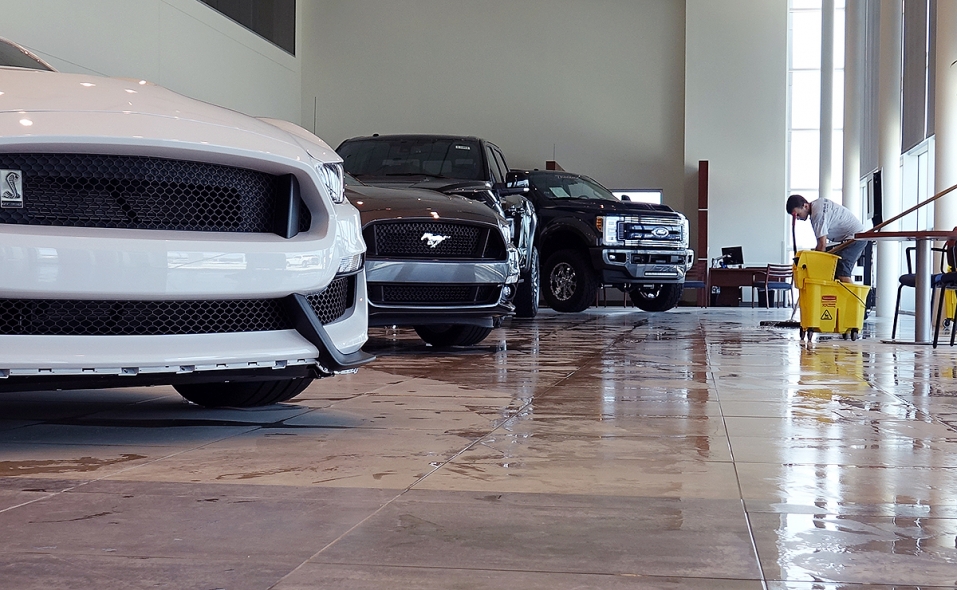 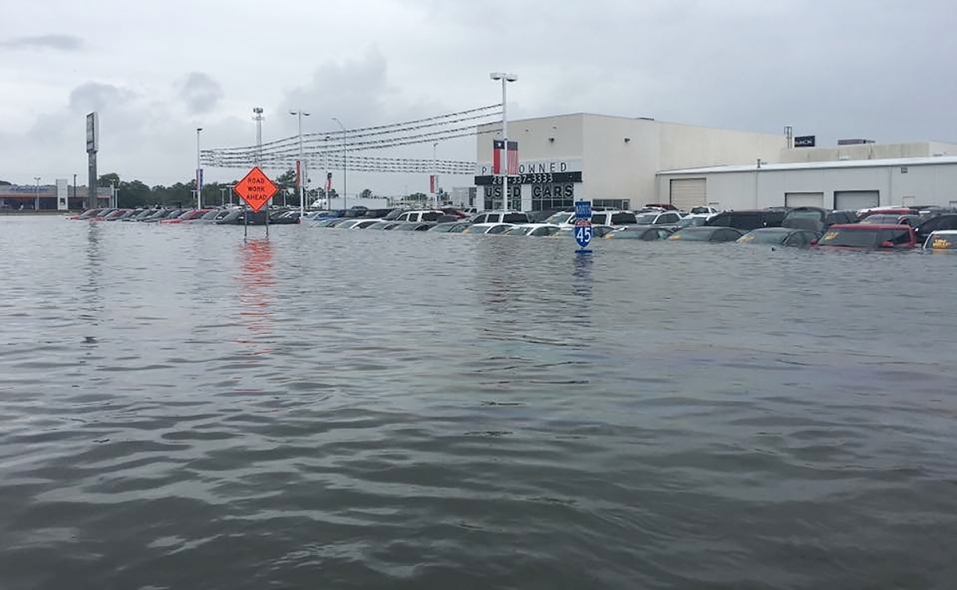 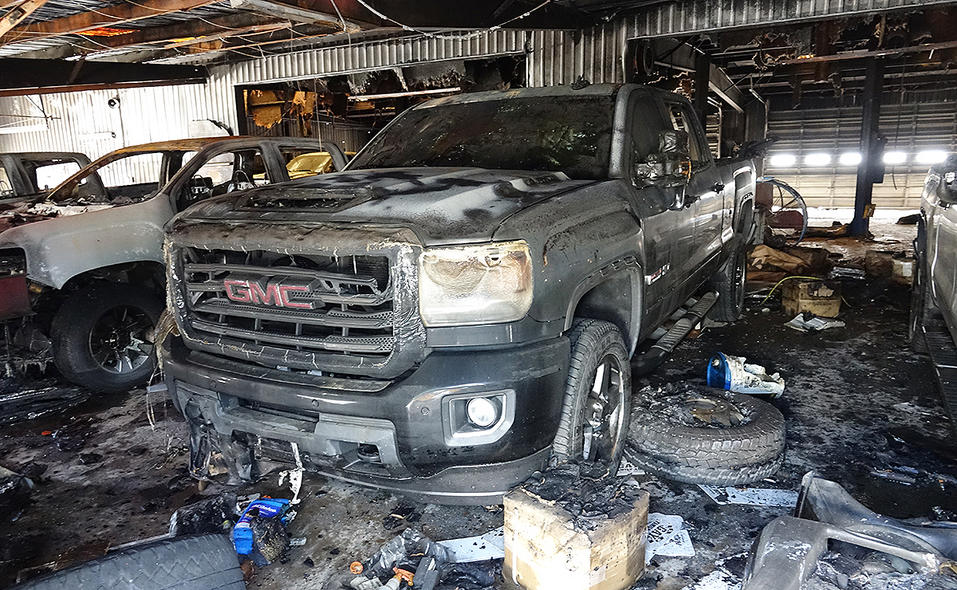 A fire broke out at Gay Buick-GMC in Dickinson, Texas, resulting in damaged vehicles such as this GMC Sierra.

Mitchell Dale, co-owner of McRee Ford in Dickinson, Texas, just south of Houston, experienced a total loss of inventory from flooding. On Monday, he said he plans to try to get back to his dealership by boat to finish assessing the damage.

"Overall, it's catastrophic. Major damage. We've received over 20 inches of rain in eight hours Saturday night. In our surrounding area there's still people trapped in attics," Dale told Automotive News. "The dealership itself, all of our buildings, they have anything from a foot to two feet of water in them."

He added, "I've got at least a dozen employees whose houses have three to four feet of water in them."

It may be too early to start recovery operations, he said. "Right now, we just don't know," he said. Harvey, which has been downgraded to a tropical storm, is "now coming back to the Southeast. It's predicted to come back to Houston on Wednesday."

"We are struggling with the evacuation right now," Wyatt Wainwright, president of the Houston Automobile Dealers Association, said in a statement posted on the National Automobile Dealers Association website. "There are large scale mandatory and voluntary evacuations going on right now. We don't know where we can go to escape. I don't know how I could drive three miles right now without getting blocked."

"There's still 20 to 30 inches of rain that still has to pass through. We are not even near to the peak flooding yet," Wainwright said. "A big issue we haven't faced yet are rivers and streams that have yet to overflow. There is so much more of this to go which is the problem."

NADA spokesman Jonathan Collegio said the association is still assessing the breadth of the damage, but estimates somewhere between 30,000 and 35,000 dealership employees in the Houston area could have been affected.

Group 1 Automotive Inc.’s Houston headquarters and all of its 28 dealerships in the area are closed today, said Pete DeLongchamps, the company’s vice president of manufacturer relations, financial services and public affairs. He said it’s hard to say when the dealerships will reopen.

Last week, he said, stores were moving their inventory to the highest ground on their properties to prepare for Harvey. Group 1 also held conference calls with general managers to talk about its storm response.

“It’s a difficult time. Our main focus is on our associates. We have several thousand in the Houston-Beaumont area,” DeLongchamps told Automotive News. “Once we can assess the operation, then we’ll move from employee concerns to taking care of our customers. Right now, everybody is trying to stay dry and stay safe. It’s an unbelievable disaster which could unfold to be the largest disaster in U.S. history, eclipsing Katrina. This is certainly unprecedented.”

Once Harvey subsides, DeLongchamps said he expects that tens of thousands of people will “need help” with their vehicles. TV news coverage has shown vehicles submerged in water on the streets, but DeLongchamps said home garages are flooding, too. He said he has friends who’ve never had flooding issues in 20 years at their homes despite numerous storms, but that changed with Harvey.

AutoNation Inc.’s 18 stores in Houston are closed today. The stores were shuttered by Friday evening before the storm made landfall.

“We have developed some expertise on these types of things because obviously, this is not the first one we’ve been through. We’ve had storms in Florida and hurricanes in other spots, so we have a plan that we mobilize,” Cannon told Automotive News.

He added, “The plan is off and running. We have people on the ground looking at the facilities and what’s happening with the facilities. The most important thing we’re doing right now is checking on our associates. We have a team making contact with associates. Finding out from those associates who are in a terrible situation what they need, and trying to assist with that.”

“We hope to be open tomorrow,” he said, reached by cell phone at his home. “Right now, we just have our gates open so tow trucks can drop off cars disabled by the flooding.”

“We’re mostly trying to make sure our employees and their families are safe and have a place to stay,” he said. “The Houston stores are dry except for a few minor leaks and we haven’t lost any vehicles so far as we know.”

Laperel said a couple of flooded-out employees are currently staying at his house.

Calls to his dealership are being routed directly to him. Laperel said he doesn’t know the status of two other Gillman stores in the southern tip Texas, south of Harvey’s landfall: Chevy store in Harlingen and Chevy-Buick-GMC in San Benito.

Fred Salinas, dealer principal at Friendly Ford of Crosby near Houston, said his store will lose a big percentage of its new and used inventory because of water damage. He said around a foot of water had collected on the store’s lot yesterday, while another half-foot was in the store itself. The flooding has receded today, but Salinas wouldn’t rule out the possibility that the water levels could rise again.

Salinas said he has been in contact with Ford Motor Co. officials in the region who said they will assist him in any way they can.

Friendly Ford of Crosby near Houston says it lost much of its inventory due to water damage.

Some dealerships were more fortunate, at least for the moment. Tim Brackenbury, a sales manager at Don McGill Toyota in Katy, Texas, about 30 miles west of Houston, said he's heard colleagues say that his dealership and car lot appear to be dry, but flooding from surrounding roads will make access difficult.

"We still have two more days of rain scheduled here in Houston so we'll see how it all plays out," he said. As of Monday morning, approximately 350 roads in Houston, the nation's fourth-largest city, were blocked by high water. Brackenbury said a skeleton crew of employees will head over to help those in need.

Another 15 inches of rain could fall in the area in the next three days, The National Weather Service predicts.

Brackenbury said dealers whose inventories remained more or less intact will see a sharp hike in sales in the months following the hurricane, as those who have lost vehicles in the deluge will need to replace them.

"It's going to cost us a week of business but boy, oh boy, after the flood business is going to be good for the next 60 days," he said.

A spokesperson for Park Cities Ford-Lincoln in Dallas said in an email that two sibling stores north of Houston -- Planet Ford in Spring and Planet Ford in Humble -- are closed today.

When stores in the area will be in a position to reopen is anyone's guess, Dale of McRee's Ford said, but town officials have reported schools will remain closed in Dickinson until Sept. 5.

"All I do know is I've got a number of employees with extensive water in their homes and a total loss of inventory," he said. "It's been a tough one."

Vince Bond Jr. and Jesse Snyder contributed to this report.

A look at Hurricane Harvey damage