A migration to Texas, done the Toyota Way 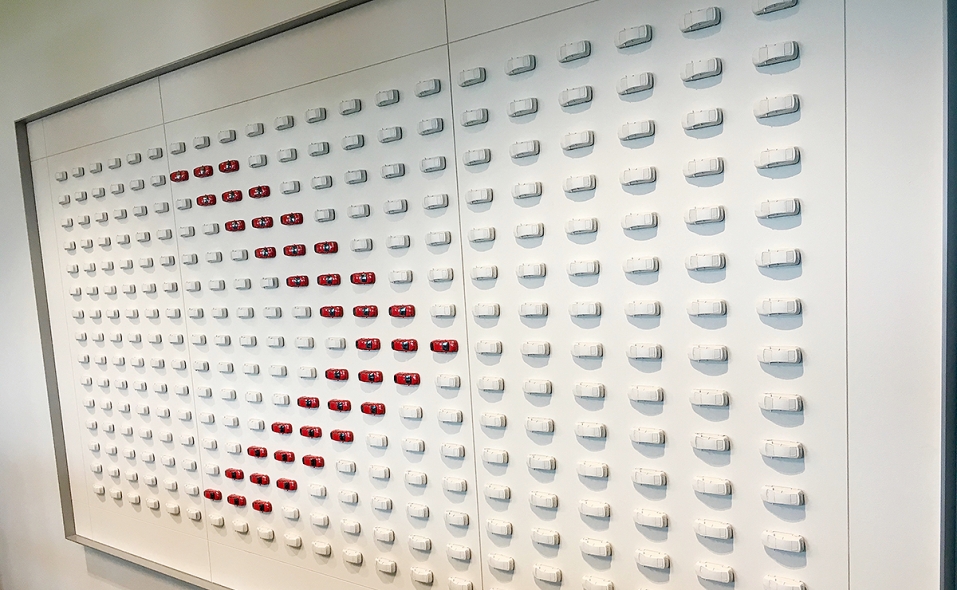 LAURENCE ILIFF
Auto-related artwork is one of the signature features of the new Toyota headquarters, with this piece a study on thinking outside the box.
Share 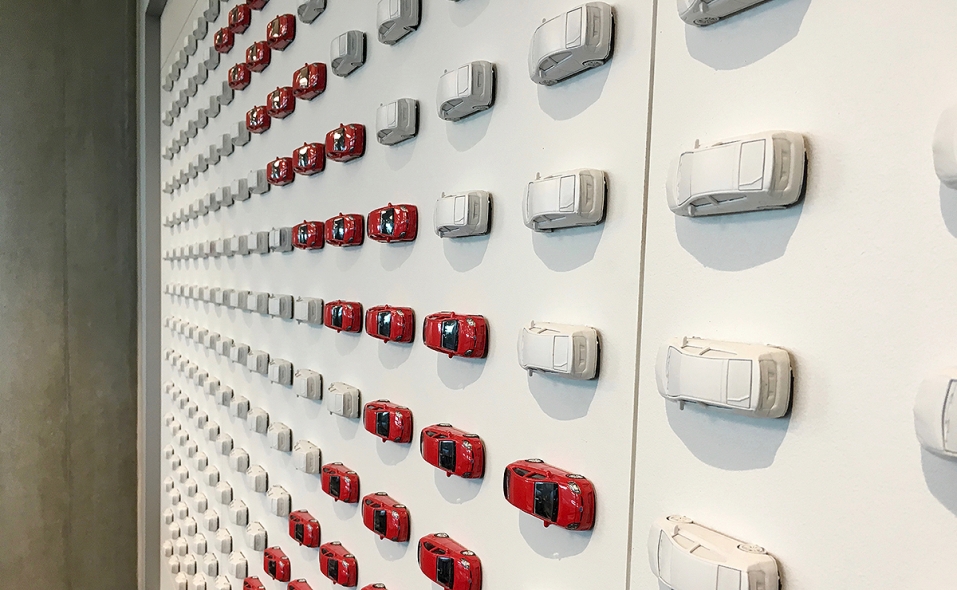 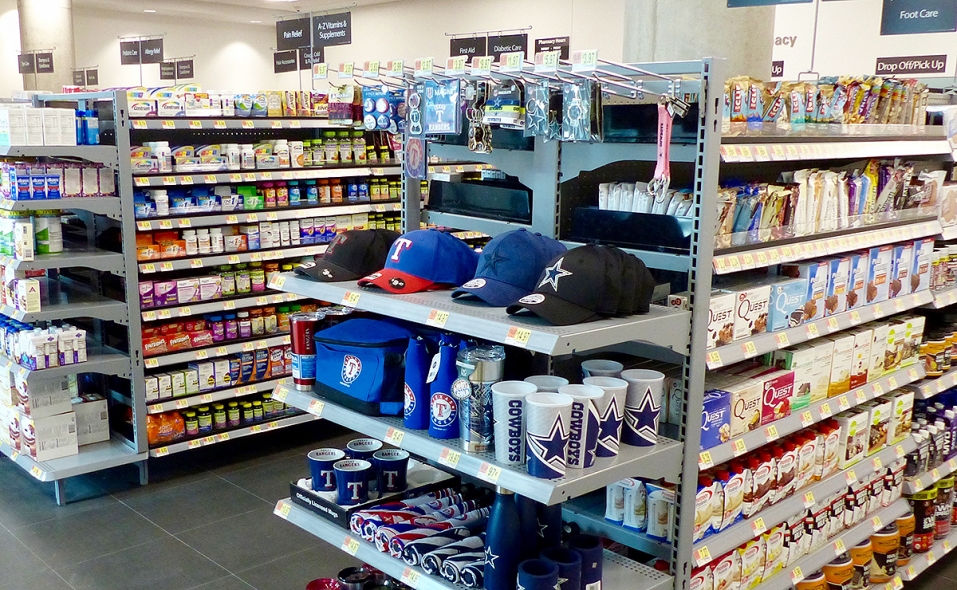 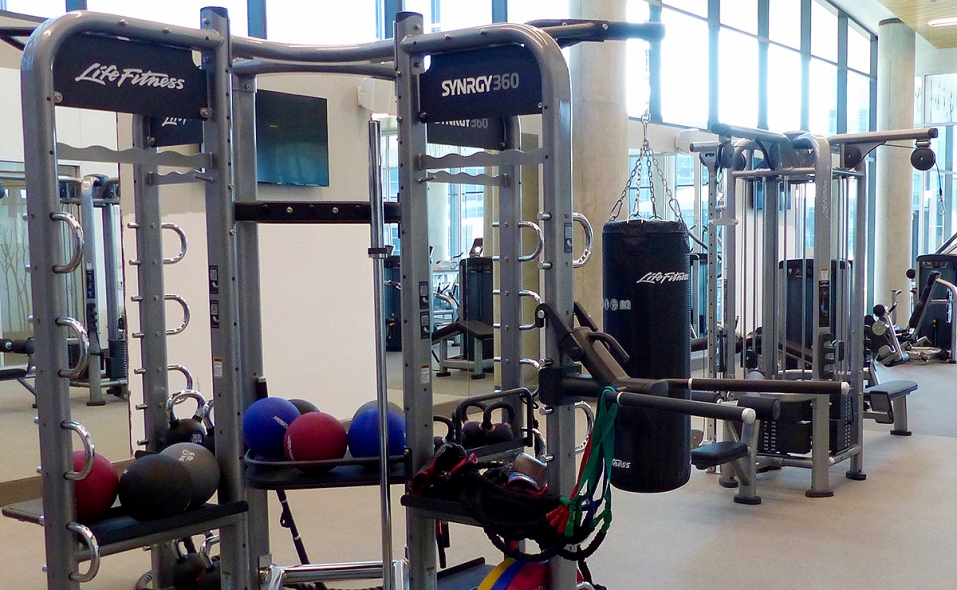 LAURENCE ILIFF
One perk of the new HQ is a two-floor gym and rock-climbing wall, as well as regular exercise classes, that offer physical activity when it's too hot to go outside.
Share 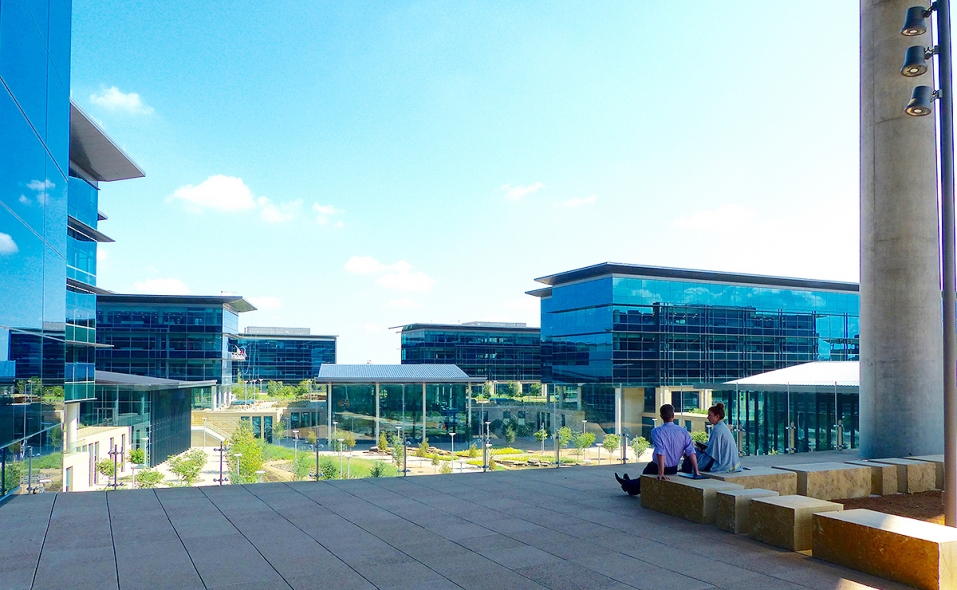 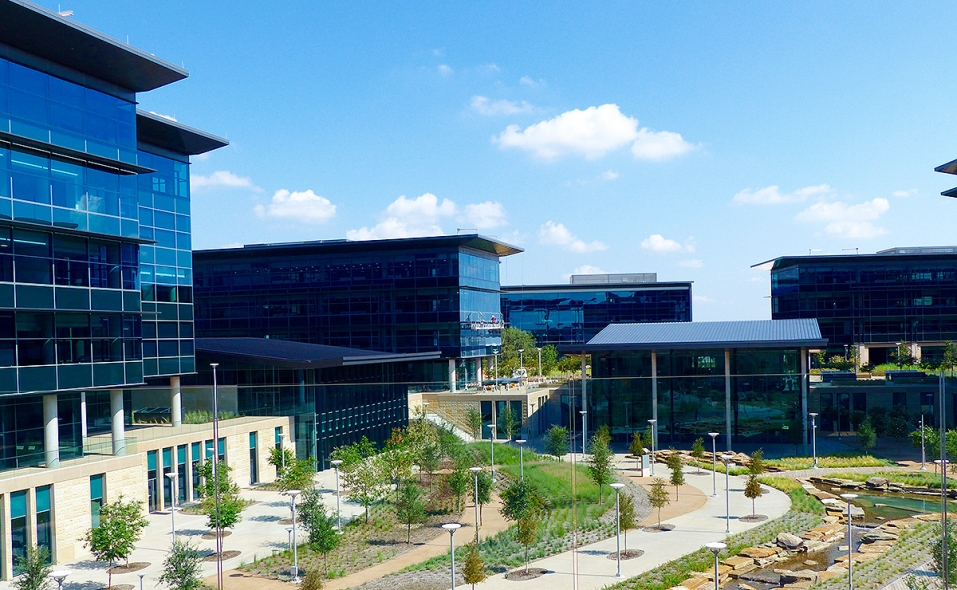 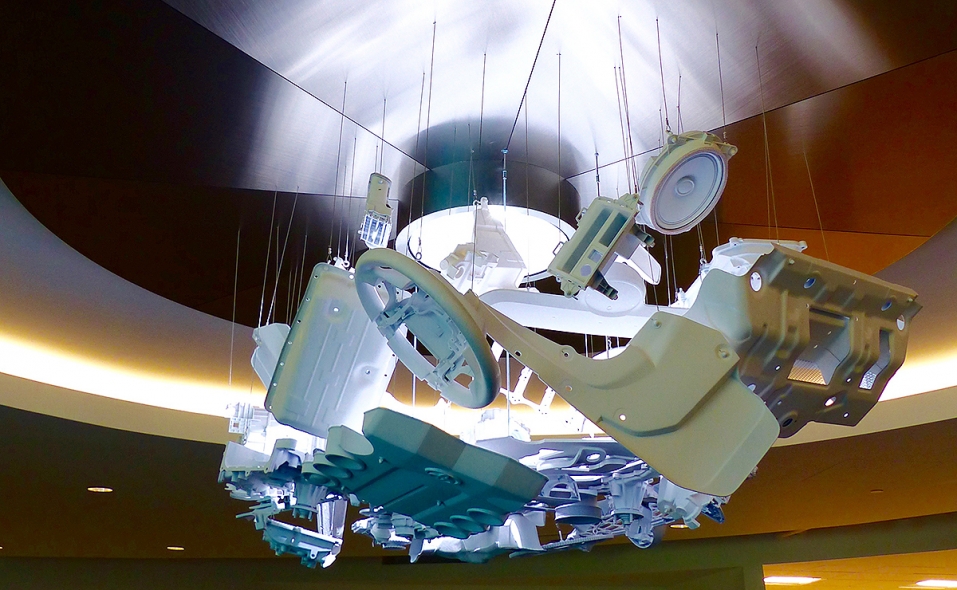 LAURENCE ILIFF
An automotive-themed mobile depicts some of the parts that make up a Toyota vehicle, with the word 'drive' projected onto the floor below.
Share 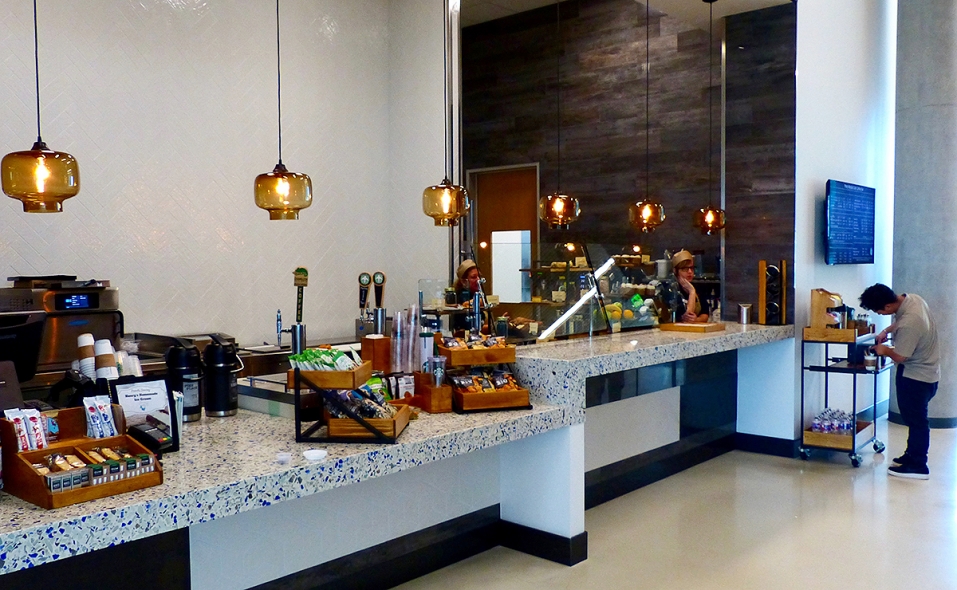 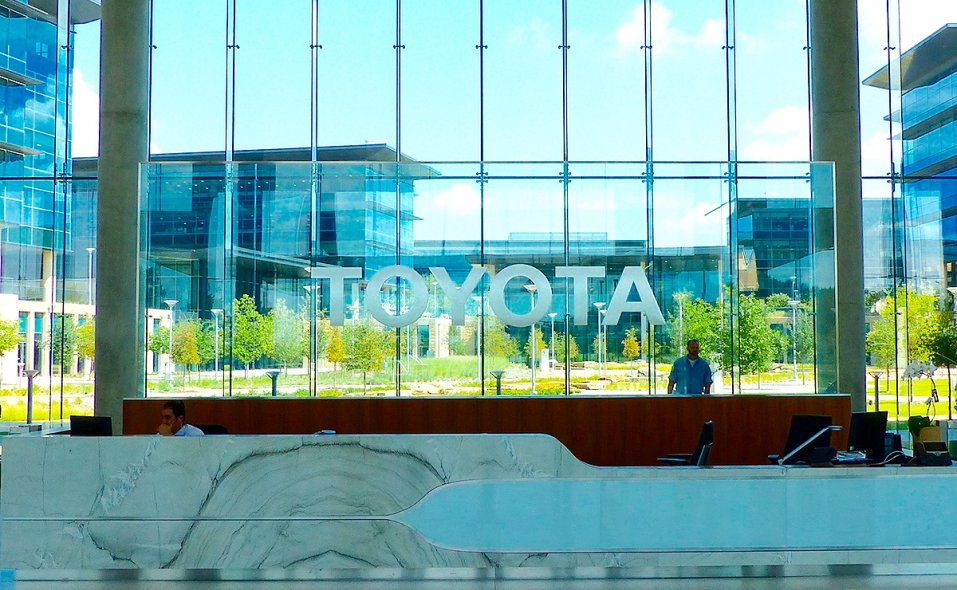 LAURENCE ILIFF
The main headquarters lobby looks out onto the a central garden patio, one of many outside spaces where workers can collaborate when the Texas sun cools down in the fall.
Share 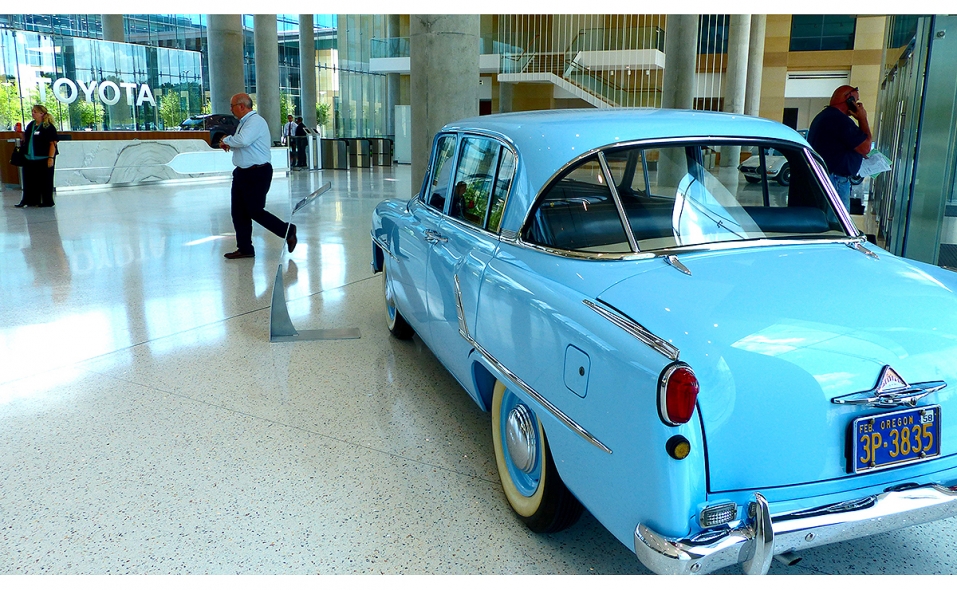 LAURENCE ILIFF
The front lobby of the headquarters' main building features autos from Toyota's car museum, including the 1958 Toyopet Crown, which was the brand's first passenger car sold in the U.S. and the first Japanese auto to be exported to the American mainland.
Share 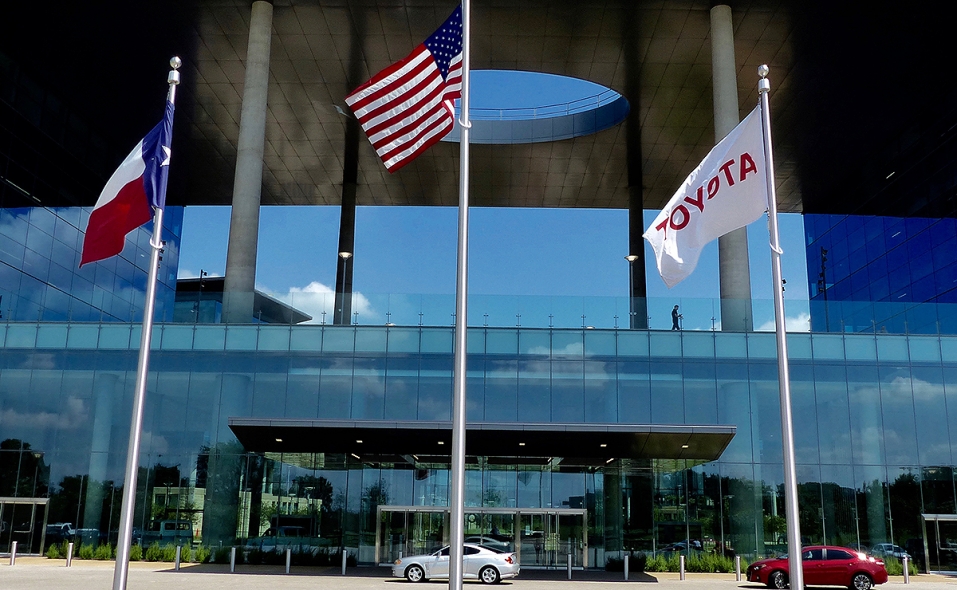 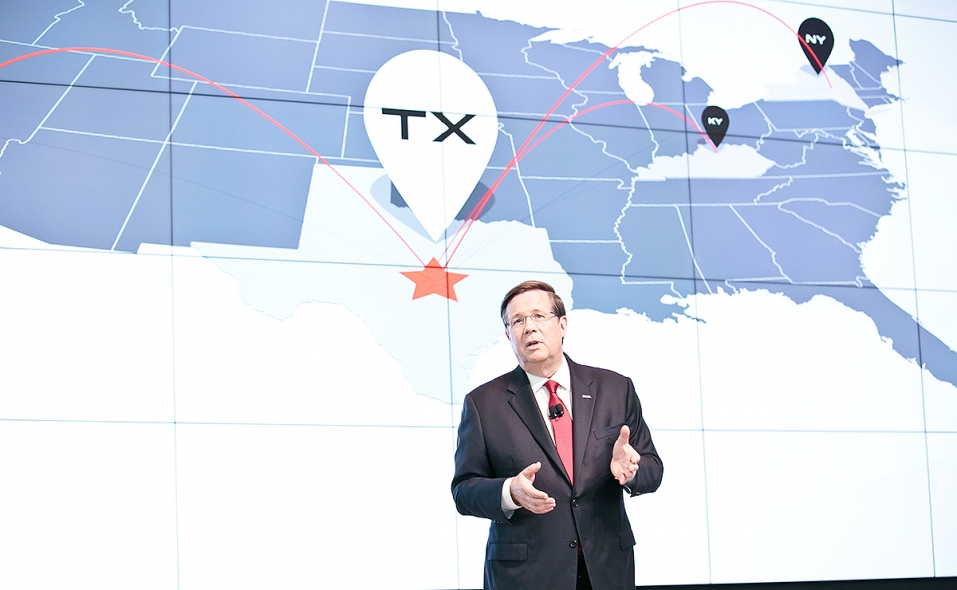 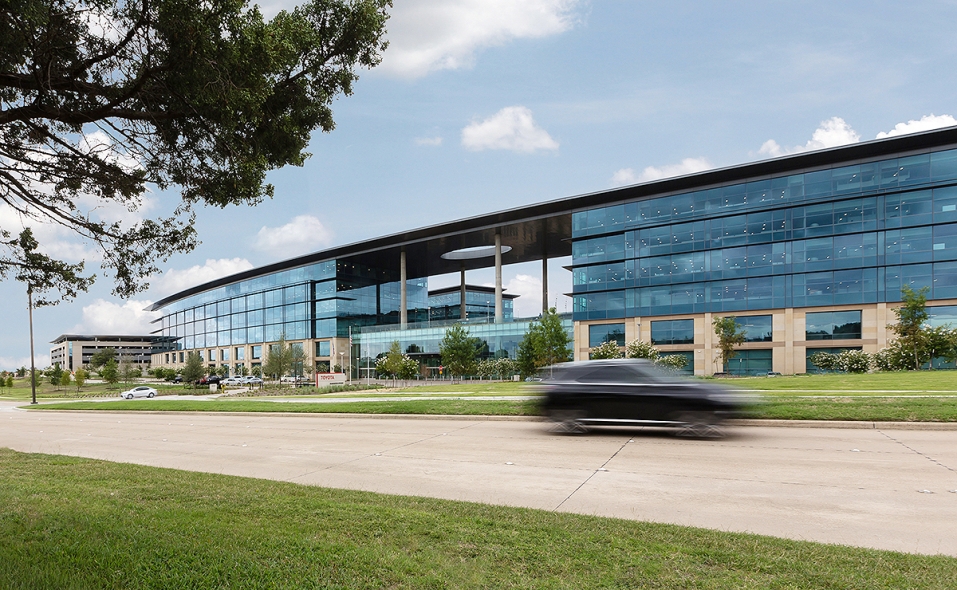 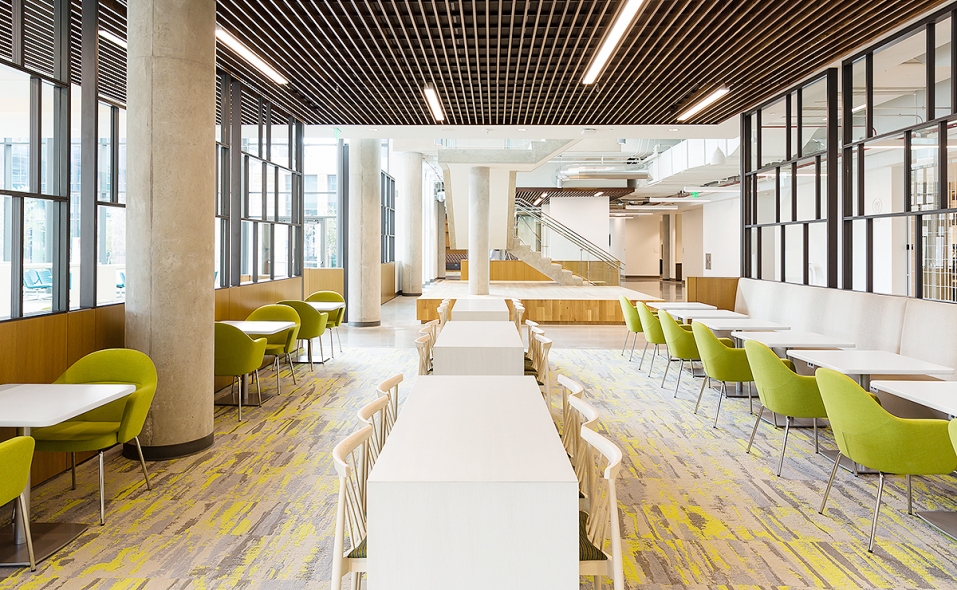 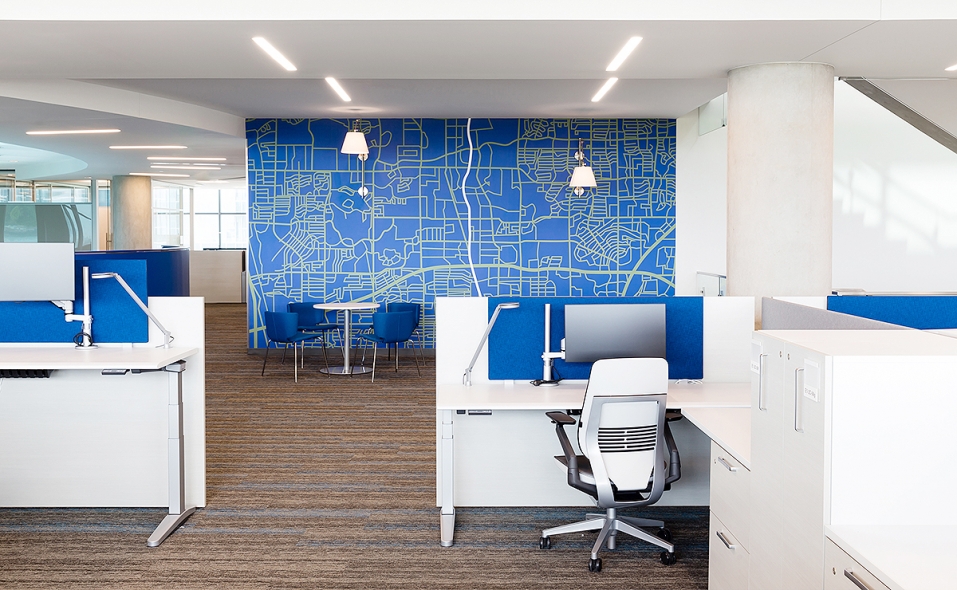 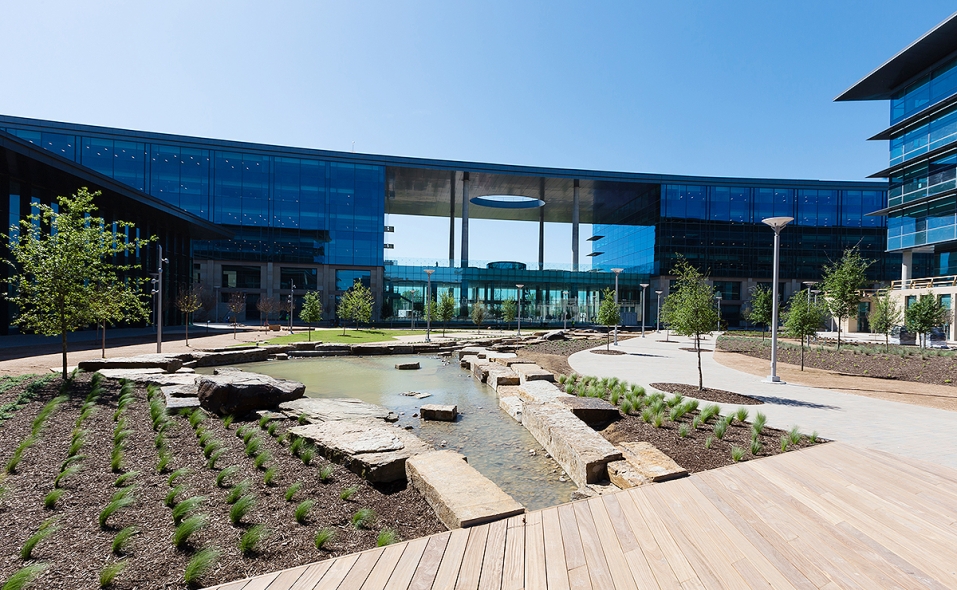 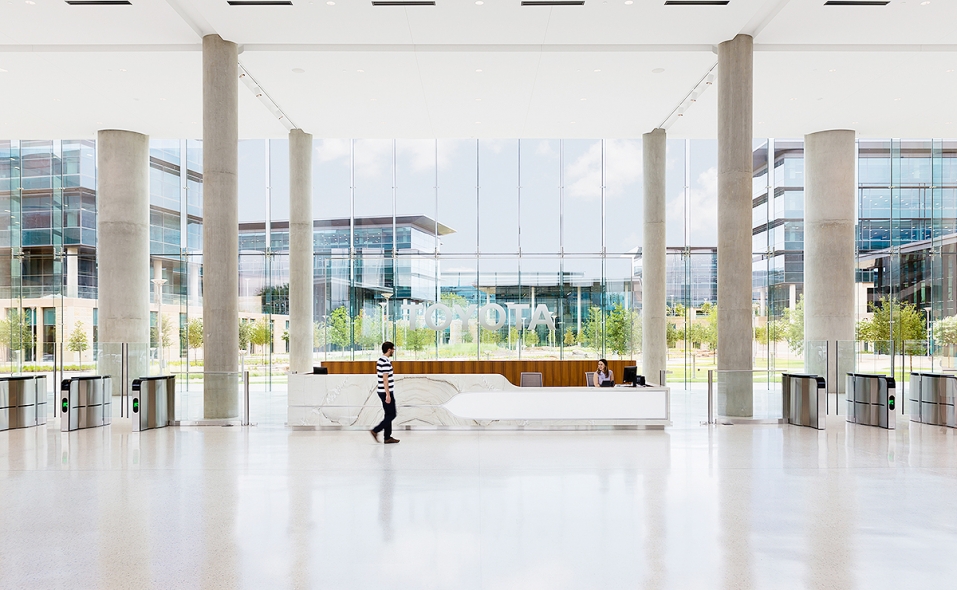 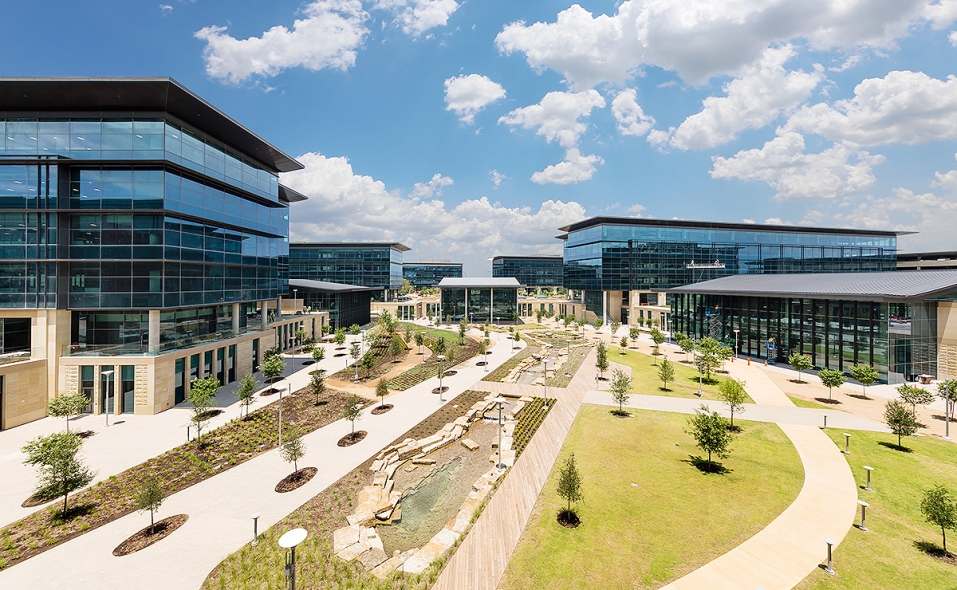 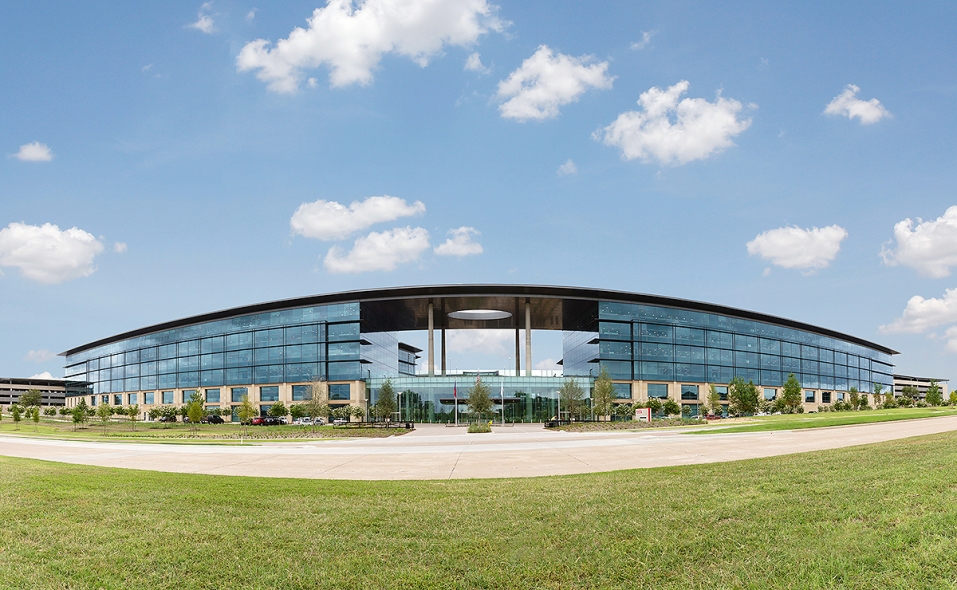 It was a fitting tribute to Toyota's $1 billion bet to uproot thousands of workers from techie California to a Texas city whose name means "a flat place" for its barren terrain.

The logic of nestling the regional home of one of the world's dominant automakers amid Plano's headquarters row of financial institutions and insurance companies wasn't immediately apparent three years ago, when stunned Toyota and Lexus workers got the news.

"Great place to work, until they moved to Texas!" was one of the skeptical comments posted anonymously on job site Glassdoor by an engineer at the former Torrance, Calif., headquarters shortly after the announcement hit like a thunder clap in April 2014.

Steaming-hot Texas was no match for beachy Southern California and its car culture, not to mention the potential for strained family ties ​ from the move, some workers argued. "Respect your people and their knowledge and experience," a former administrator suggested to Toyota this year on Glassdoor. "They're not replaceable for half the price in Texas."

Amid the predictions of a massive brain drain as the auto industry undergoes a volatile transformation, the Japanese automaker applied its methodical Toyota Way of continuous improvement to pull off a risky dance of its own.

Three years after tackling a fragmented organization, Toyota executives say they've consolidated operations from around the country under the roof of One Toyota — the internal name for the project — just in time to confront the disruptive challenges facing the industry.

Of the 3,000 workers in Torrance asked to move, plus another 1,000 at a Kentucky engineering center and 50 at smaller operations in New York, about 75 percent made the trip to Plano. That's an impressive number given that Nissan lost roughly 60 percent of the 1,300 people at its Los Angeles headquarters when relocating to Nashville in 2006.

Toyota has quickly found local talent to replace those who didn't move to Texas, hiring 800 people so far, mostly from the Dallas-Fort Worth area, executives said.

All told, about 4,200 employees will find homes in One Toyota's seven office buildings and 2.1 million square feet when the last of the stragglers move in by year end.

Despite suspicions that the Texas consolidation was mostly to reduce head count, the company spent considerable time and money persuading workers to go along for the ride, promising everyone a job. The $1 billion earmarked for the move includes a relocation bonus based on salary and tenure, relocation packages to cover moving expenses, assistance with selling their homes and buying new ones in North Texas, and a retention bonus for those who stay on at the Plano headquarters for two years.

Toyoda: Plan for the future.

Toyota executives say the transformation is already paying off.

"The reality is, we are today and will always be a consensus-driven company," Jim Lentz, CEO of Toyota Motor North America, said in an interview. "And the quickest way to gain consensus is to get everyone on board.

"In years past, it might be that manufacturing was going one direction and sales might be going the other. So, there were times where we confused Japan on the signals that we would send and that would just delay decisions. Today, when we go to Japan, sales, manufacturing and design are all in sync on the direction we want to go and it allows us to make decisions much quicker."

Lentz said Toyota, which started operations in the U.S. 60 years ago as a distributor, had become spread out over time, with employees on each coast and its manufacturing footprint mostly in the Midwest and South.

The transformation of Toyota's North American operations is already paying off, executives say.

One Toyota's origin story goes back four years to Lentz sitting down with company President Akio Toyoda after being named regional CEO. Lentz laid out a multiyear plan for the future, and Toyoda countered that a 50-year vision would be more appropriate.

Toyoda said he felt "a strong sense of crisis" this year after the automaker posted a 21 percent drop in net income for the fiscal year that ended March 31. "The present automobile industry is being asked to make a paradigm shift," he said in May, "I want to continue planting seeds with a look to 10 or even 20 years into the future."

For the company's crucial North American operations, Lentz said One Toyota is a big part of a forward-looking approach that will allow the company to execute quickly and avoid being left behind.

"A lot of people think we're just relocating people from one part of the country to the other," Lentz said. "It's much, much more than that. It's really creating an all-new organization."

Now that he has the centralized campus to encourage that effort, Lentz and his team can focus on the future.

Back in 2014, the most pressing concern for some Toyota managers was breaking news of the relocation without setting off employee panic.

Cheryl Hughes, chief human resources officer for Toyota Motor North America, said her team came up with a plan to assure workers they had around two years to make up their minds and that the company would give them the information they needed to do so.

"We wanted to let them know that, one, they would have time to make a decision and, two, we wanted as many as possible to come with us, which is a little different than maybe some other corporate moves," Hughes said in an interview at the new campus.

"We wanted to be able to share with them: 'Here's why we're doing it; here's why it's so important. We need to come together as one company, collaborate more effectively and really be able to respond to our customers better,'" she said. "This was really about Toyota's culture and about the fact that respect for people and continuous improvement are pillars of the Toyota Way."

News of the company's move leaked out just before the official announcement on April 28, 2014. Some employees have said privately that the initial reaction was overwhelmingly negative, at least in California. Over time, though, many who thought they would never leave the West Coast — or Kentucky or New York — cashed their bonus checks, packed their bags and left for Texas. (An additional 300 Kentucky jobs were shifted to the Toyota Technical Center near Ann Arbor, Mich.)

Yes, some employees were upset by the news, Hughes said, but others were in favor or simply unsure what it would mean for them.

Toyota, through a consultant, talked with other companies anonymously to see what had worked for them in their relocations — and what had gone wrong. Out of that came one of its most successful programs for retaining employees, known as "go and see."

"We decided very quickly that probably one of the best decisions we made was to offer these two-and-a-half day trips for the team member and a family member to come with them to really experience the Plano location," Hughes said. (Those being transferred to Michigan got a chance to check out their potential new home as well.)

"Depending on where you were coming from, the Dallas area probably presented different things to different people," she said. "I think Californians, you know, the coast and the weather, obviously that was probably a bigger thing. I think Kentucky people probably were more concerned with housing prices, a bigger metro area."

For Californians, housing in the Dallas-Fort Worth area was far cheaper. The median home price in Plano is about $325,000, compared with $775,000 for Torrance, according to the real estate website Zillow. The median price in Erlanger, Ky. — the former home of the Toyota engineering center — is about $125,000.

Although much has been made about the desirability of Texas relative to California in endless online forums, Hughes thinks family ties or a spouse's job were the top reasons for staying behind. "I don't think it was about Texas at all," she said. "I think it was more about the individual team member's circumstances than it was about moving to Texas."

One surprise to management, in fact, was the number of Toyota employees volunteering to move early. The first group of "pioneers," numbering in the dozens, set up shop in temporary offices in August 2014. Subsequent waves forced the company to lease additional office space until the number was up to about 2,500 by the time the headquarters was completed in May.

Others wanted to be in the last group arriving later this year, or created a back-and-forth arrangement as their kids remained in hometown schools or spouses hung on to their jobs.

At the end of the day, Hughes said, Toyota kept its promises: Employees were given time and resources to ponder a move to Texas and all were offered a job under the reorganized corporate structure — either their existing job or a new one.

For their sacrifices, Toyota and Lexus employees have been rewarded with a slew of new opportunities internally that came with the North American reorganization and the departures of 1,000 people who chose to leave the company rather than relocate.

For some reluctant to make the move, that upward mobility was enough to stick with Toyota rather than seeking employment at rival automakers that remain in the Los Angeles region, including American Honda, Mazda, Kia and Hyundai.

"Part of why we were coming together as One Toyota was because we wanted to share that talent across manufacturing, design and engineering, sales, as well as financial services," Hughes said. "I don't think it was a formal incentive but I'm sure that team members felt like, 'Boy, if I can have a different job or have an opportunity that didn't exist before,' that would probably incent them to come with us."

Toyota's relaxed headquarters timeline was a rush for builders

Why Toyota is doubling down on N. America