Service profits depend on up-to-date digital ads and marketing
Skip to main content
June 19, 2017 01:00 AM

Service profits depend on up-to-date digital ads and marketing

Your service department has replaced those old-school snail mail postcards and newspaper ads with web pages, email messages and Google searches as the most effective ways to reach your customers. So you're on the cutting edge of online marketing, right?

The most marketing-savvy dealerships also are communicating with their service customers via social media such as Facebook and Twitter, smartphone apps and slick YouTube videos. In a digital age, many other dealerships need to do more, and do it faster, to promote their shops online.

Although the typical dealership makes most of its profits from parts and service, says industry consultant Jeff Clark, it still devotes just 3 percent of its online content to fixed operations.

"Dealers are so focused on selling more cars that they tend to overlook what actually pays the bills and keeps the lights on," says Clark, the executive vice president of business development for DealerOn, a provider of dealership websites and interactive marketing services in Derwood, Md.

"They need to have an online service offering that is at or near parity with their sales offering," he says. "That means explaining the features and benefits of the service department, what a particular service does, and why they're the right dealership to service your vehicle."

Because 60 to 70 percent of vehicle owners search for service options on a smartphone, Clark told Fixed Ops Journal, dealers need to optimize their websites for mobile devices. They should strive to offer a "responsive" site that will automatically reformat according to the device it's viewed on — phone, tablet or personal computer.

"If you're designing your website to a desktop view, you need to get out of the 1980s," Clark says.

Most service customers at Shaheen Chevrolet in Lansing, Mich., gain access to the dealership's website through a smartphone, says Fixed Operations Director Dave Wright. Service departments must keep mobile devices' restrictions in mind when they design their websites, he notes.

"We try to put as much content online as we can, but you can only do so much, particularly on the mobile side, because there's only so much space on the screen," Wright says. "You are more limited on a phone than you are on a tablet or an iPad or a desktop."

Dealerships need to make that process convenient, he says, by embedding links to the service-scheduling web page from other online pages and in email messages.

A new Google study concludes that nearly half of vehicle owners between the ages of 18 and 44 prefer to schedule service appointments online. More than two-thirds of customers who are shopping for service make an appointment within 24 hours, Clark adds.

The Del Grande Dealer Group in San Jose, Calif., uses the scheduling platform offered by the service experience provider Xtime at its 14 dealerships.

When a Del Grande store sends email messages to existing customers that promote service specials, a link takes them directly to the scheduling page on the website. Their vehicle and personal information is already on file at the dealership.

Tully Williams, Del Grande's fixed operations director, says customers can breeze through the scheduling process, which drives more business to the dealerships' service departments. At several Del Grande stores, he notes, about half of service appointments are made online, mostly through email links.

"So now the customer can make an appointment off a digital marketing campaign and find the special in about three clicks," he adds.

Jim Roche, Xtime's senior vice president for marketing and managed services, says it's no longer enough for service departments to benchmark what other dealerships and aftermarket providers are doing online.

Instead, Roche says, they need to consider the ease of online experiences consumers have with other retail purchases, whether from Amazon, Home Depot or the local pizza joint.

The service department of Ganley Subaru East in Suburban Cleveland posts prices charged by local aftermarket competitors on its website along its own. The dealership notes the expertise and training of its technicians, their use of factory parts and specialized tools, and the multipoint inspection that is part of its service jobs. 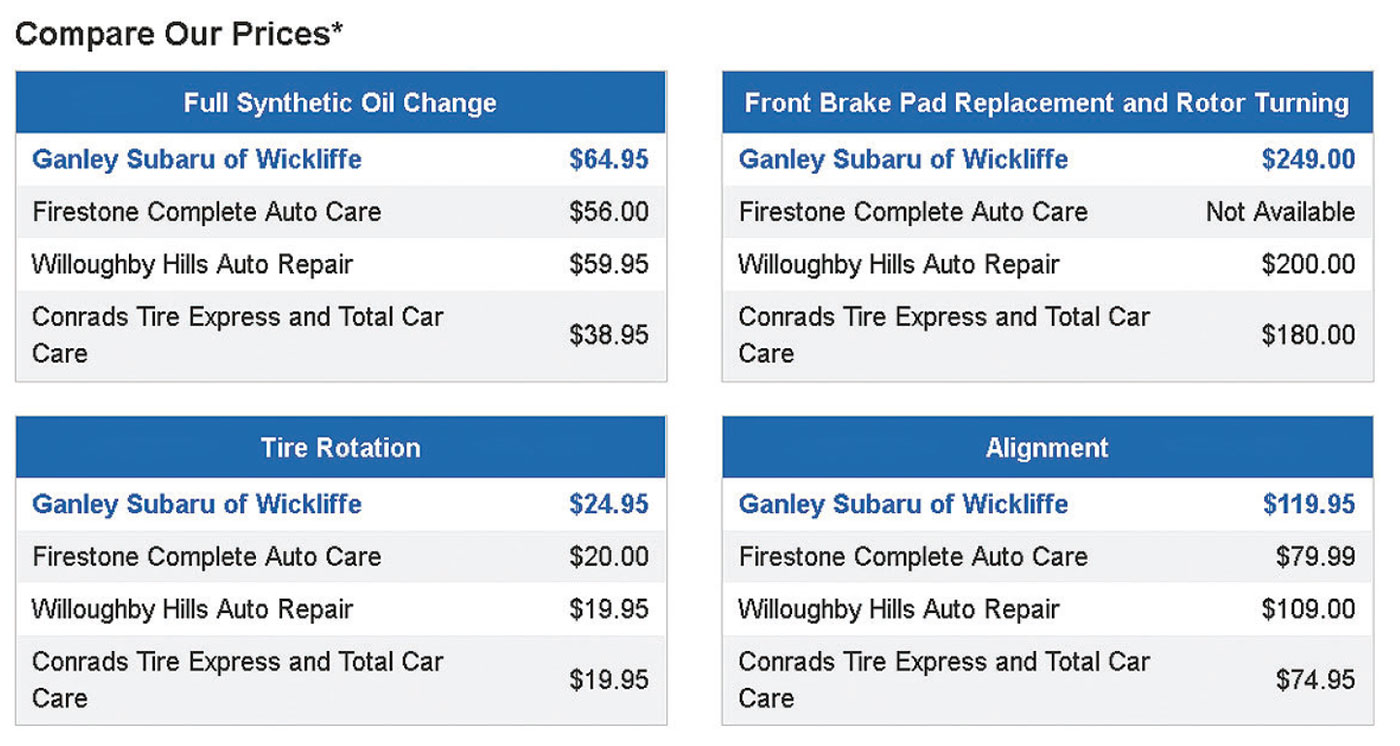 Customers who book service appointments online or respond to an email expect to continue communicating and transacting with the dealer digitally, Roche says. In a digital world, he adds, an ideal service visit should start online and work like this:

"When you arrive at the dealership, [a service adviser] with a mobile device will greet you at your car, and they will know why you are there. They will process you at your vehicle, add anything that needs to be added and let you sign with your finger, and you're on your way.

"When the vehicle moves into the shop, all that information moves along with it, so the adviser can see everything that's being done on the vehicle and can make sure to communicate to you in a timely manner via text," he says. "When you're all done, you can pay for it online."

Email has emerged as the preferred method of sending service specials and reminders to customers at many dealerships. Wright says email is producing higher response rates at Shaheen Chevrolet than old-school marketing.

Where the response rate from direct mail campaigns was typically 2 to 3 percent, he notes, some of the dealership's targeted email promotions have attracted a rate of nearly 50 percent.

"We have completely abandoned direct mail and TV and radio," Wright says, "because of the intelligence of digital marketing and what they can do to pinpoint marketing, versus blasting a whole bunch of stuff out there and hoping something sticks."

Shaheen has a database of 30,000 customer vehicles that it mines for service promotions, sent via email, based on vehicle age and service history.

"If I know you've got a vehicle with X number of miles and you got your brakes here the last time you were in and your tires here, I can send you a coupon that's a specific offer pertaining to your vehicle and what you need," Wright says.

"Email is the first choice because it doesn't cost us anything to do that versus snail mail, which typically cost $1.15 to $1.30 per piece," he adds.

Getting noticed in a daily stack of incoming emails can be a challenge. Del Grande likes to use offbeat hooks to get customers to open its messages, such as "Hug Your Plumber Day" or a promotion built around the backward speaking style of Yoda, the Star Wars character.

"You have probably a quarter to half a second before they hit the delete button," Williams says. "But if I can give them a joke, and I have your attention for a full second, then I've won the battle because at that point you would have thought, hey, I need an oil change."

Using humor as a hook means that customers also will be more willing to open the next promotion from Del Grande, he says.

Roche says service departments must be as transparent in posting prices for their products and services online as are other retailers and the dealership's vehicle sales department.

"The most egregious error dealers make in their digital marketing is not having their prices online," he says. "When we buy anything, we want to know, what do I need, when can I get it and how much does it cost?

"If I'm shopping for a service appointment, and I don't know how much it costs, I'm hard pressed to make that commitment," he says.

Xtime is owned by Cox Automotive, whose latest maintenance and repair study showed that 71 percent of consumers said that seeing a price estimate was the most important attribute when they scheduled service online — even more so than the day and time of an appointment.

At Ganley Subaru East in the Cleveland suburb of Wickliffe, Ohio, the dealership posts prices for routine service and maintenance work next to comparisons with local repair shops and tire dealers. It also lists its prices for parts and accessories.

This practice, says service director Phil Almas, helps dispel the myth that dealerships are always more expensive, though he adds that his store doesn't try to beat everyone else on price.

"We train our staff to focus on value: the skill levels of the technicians we have here, the facility we have is beautiful, the equipment is state of the art, and we have the friendliest people on the east side of Cleveland," Almas says.

"Some customers comment that though our tire rotation is $5 more than down the street, they'd rather pay here because our guys are well trained."

Prices are keyed to existing customers' specific vehicles, Williams adds, so they know what it will cost when they schedule a service appointment.

"If you have a Corvette or a pickup truck or a diesel, [the service department] will automatically know what car it is," he says. "So when I give you a price, it's locked in 100 percent."

With consumers browsing the web for vehicle service options, Roche says, a robust online presence for service departments is urgent, not merely desirable.

Cox Automotive reports that franchised dealers get only about 30 percent of vehicle service and repair business. Roche says competitors are working to poach even more customers from dealerships.

The mobile repair and maintenance provider YourMechanic, and even technology companies from outside the auto industry, could leverage their online expertise to satisfy service customers' needs, he says.

"If dealers can't deliver to consumers the experience they expect, then somebody else will, because the dollars are so big," Roche says. "If Amazon and some of these other companies decided they wanted to take a big bite out of automotive service, could they reimagine the way to do it?

How to market your service department online