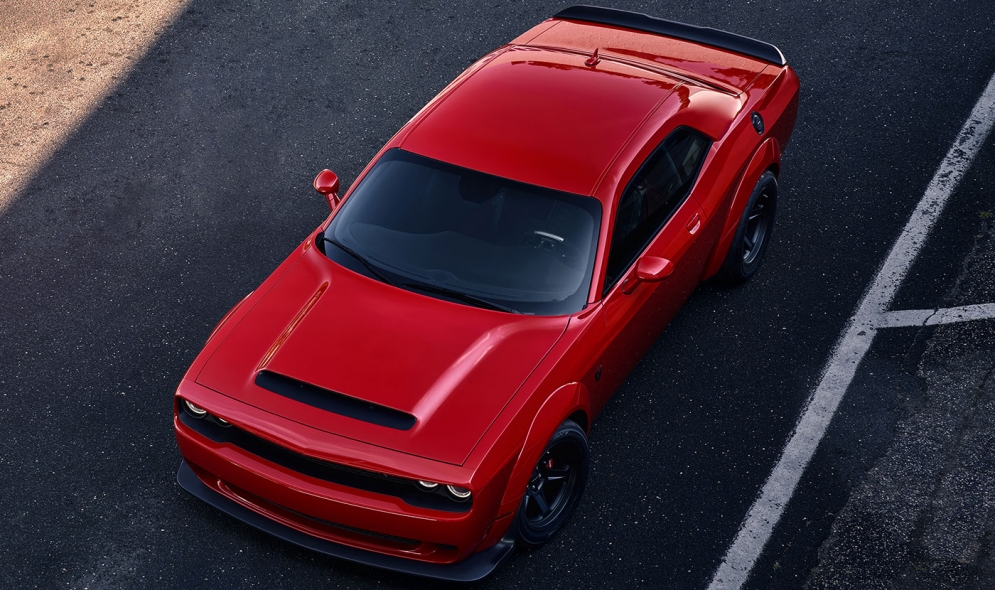 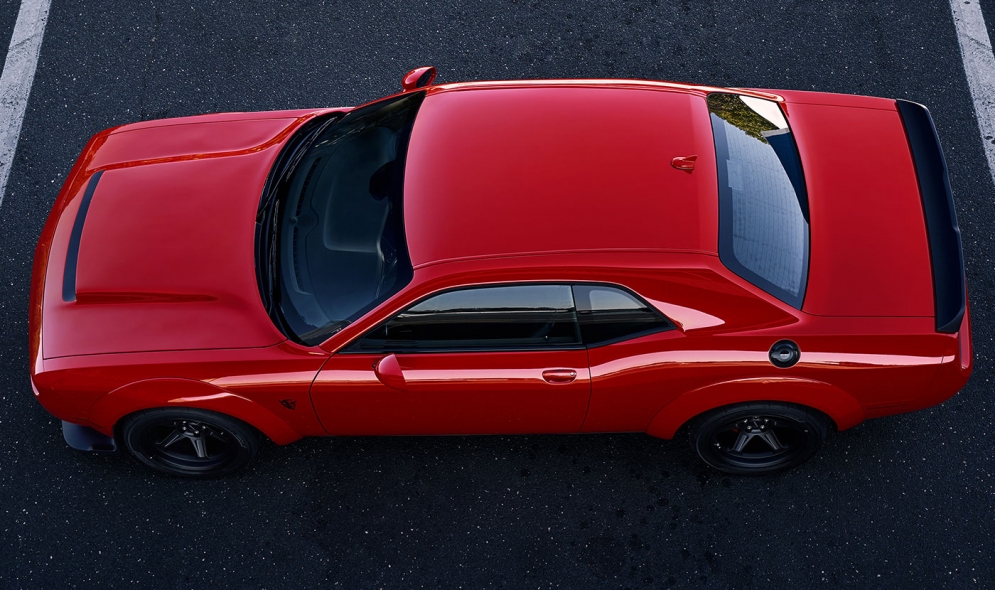 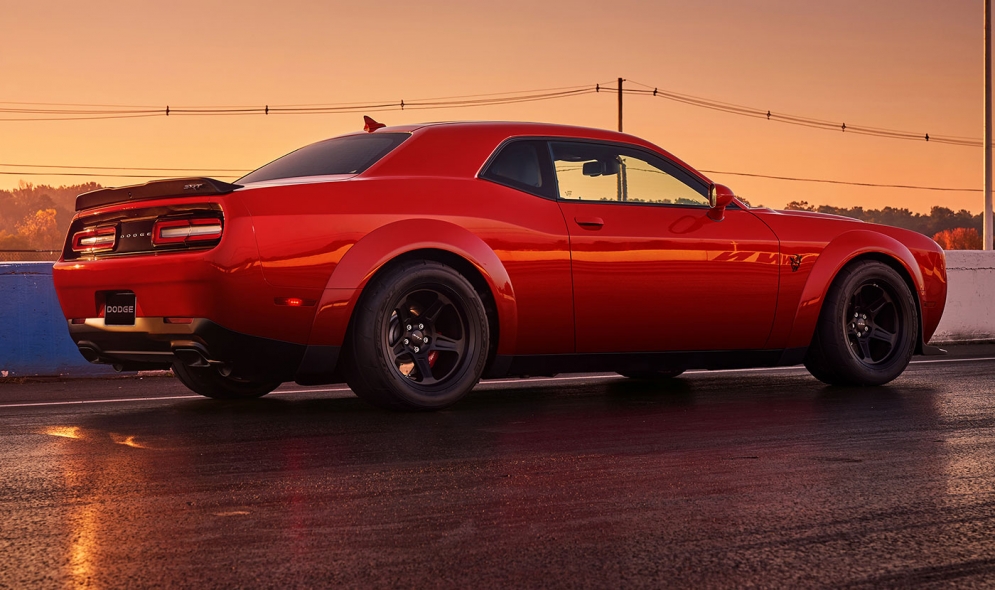 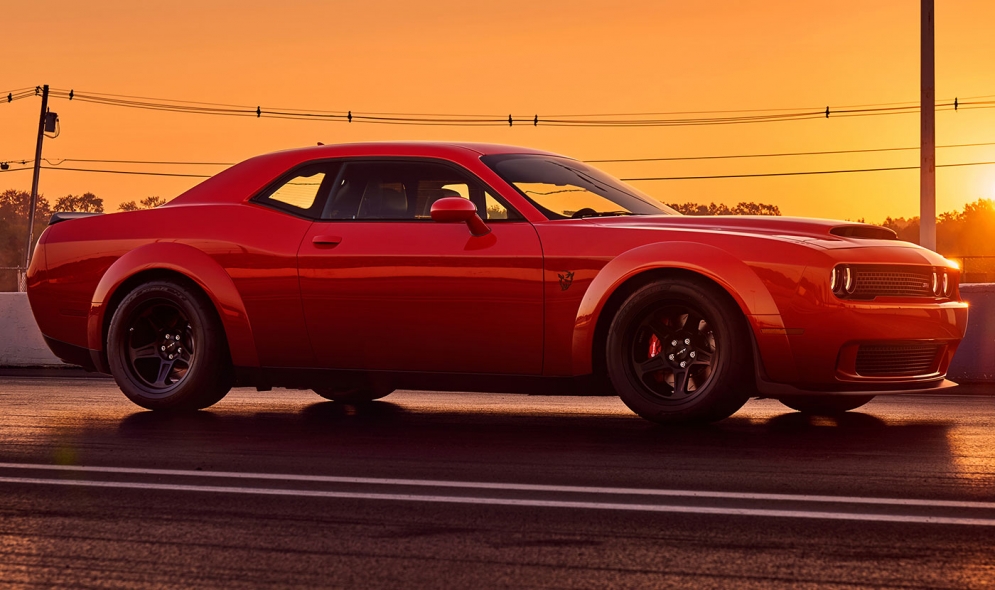 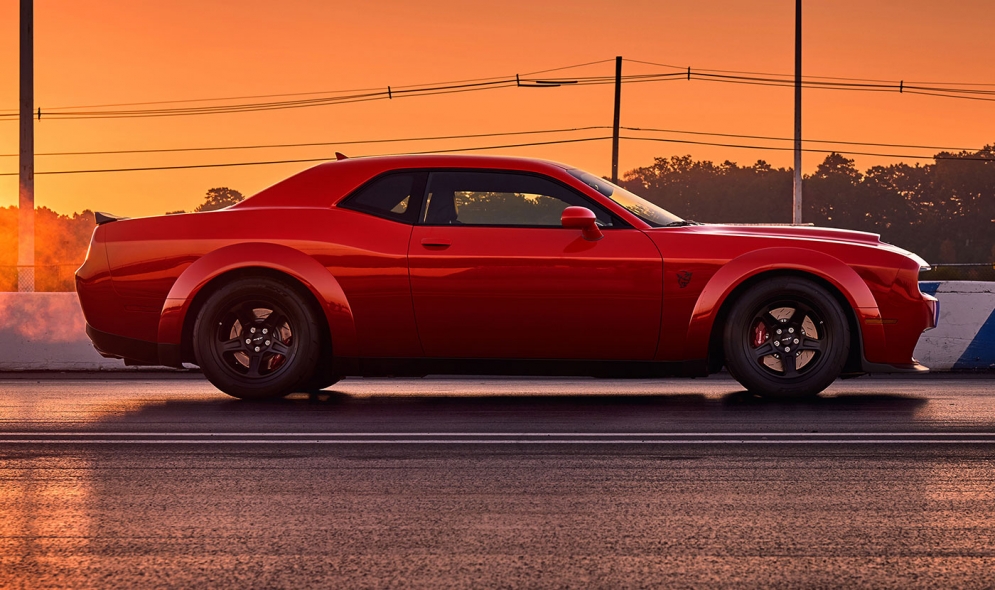 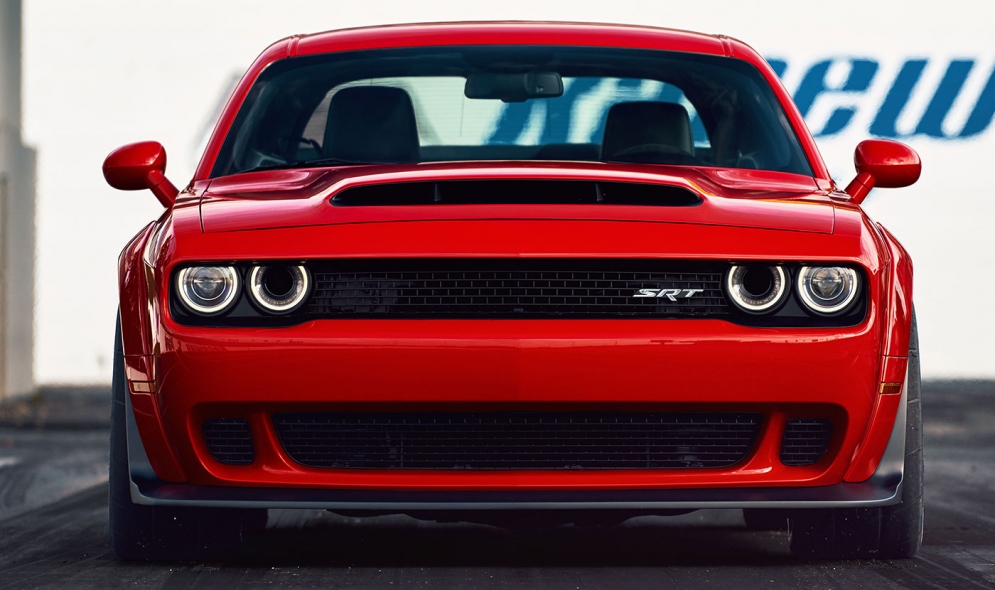 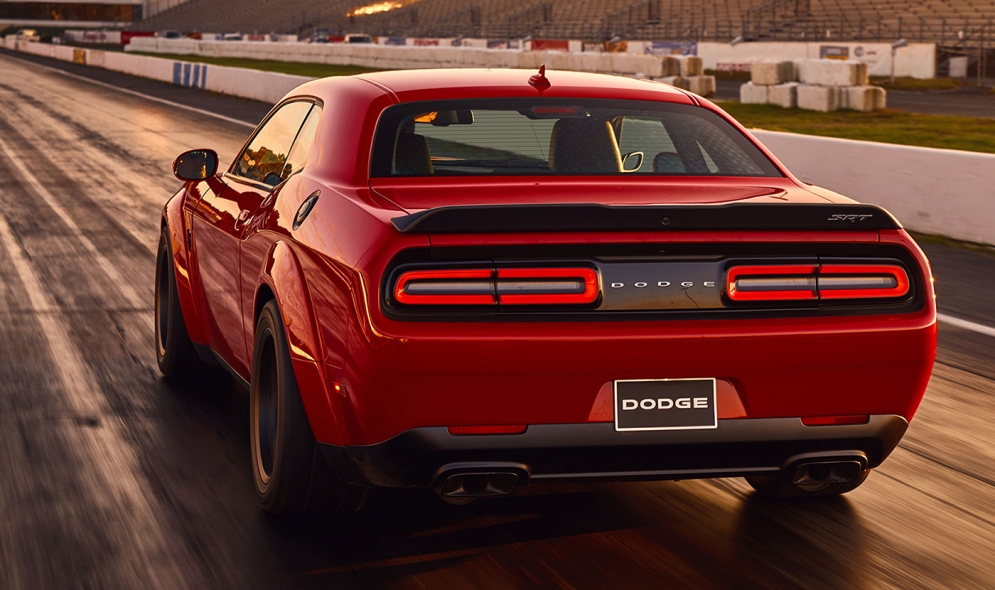 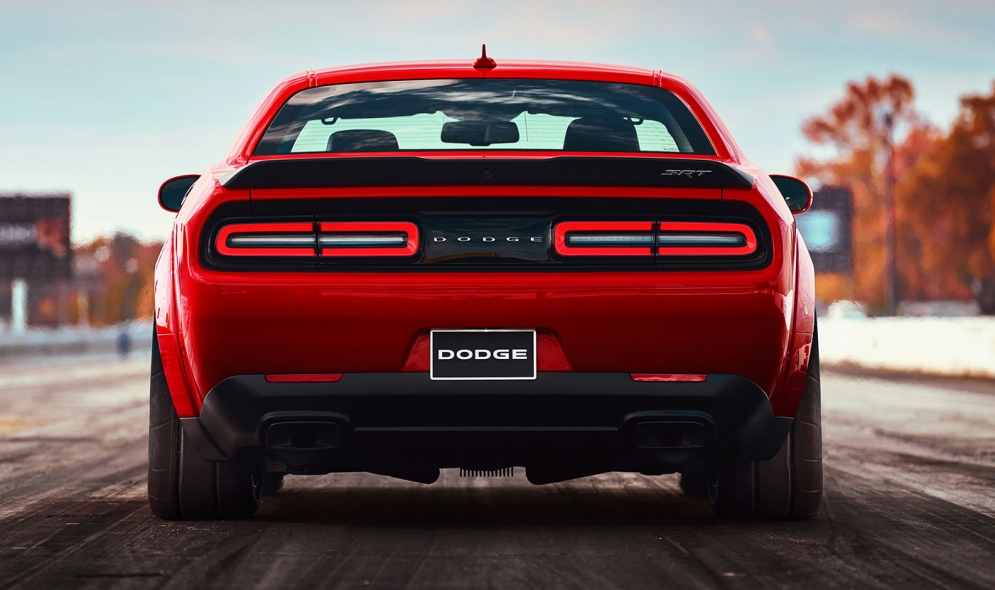 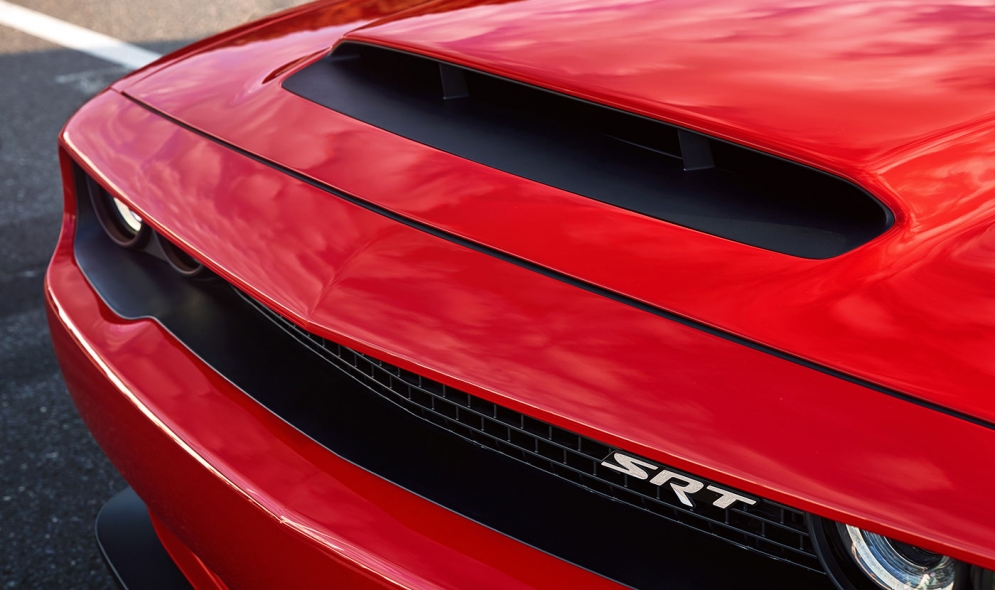 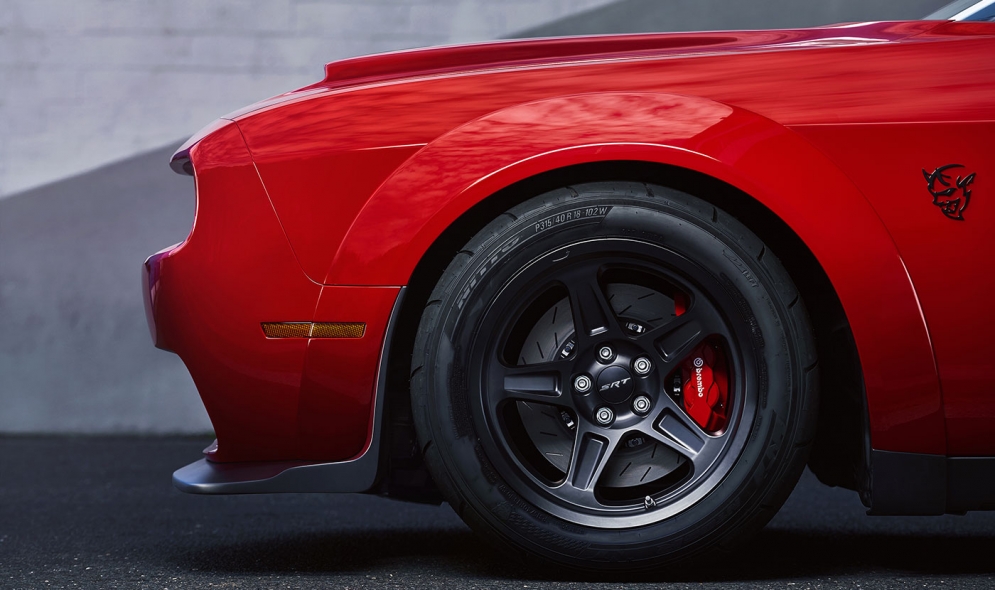 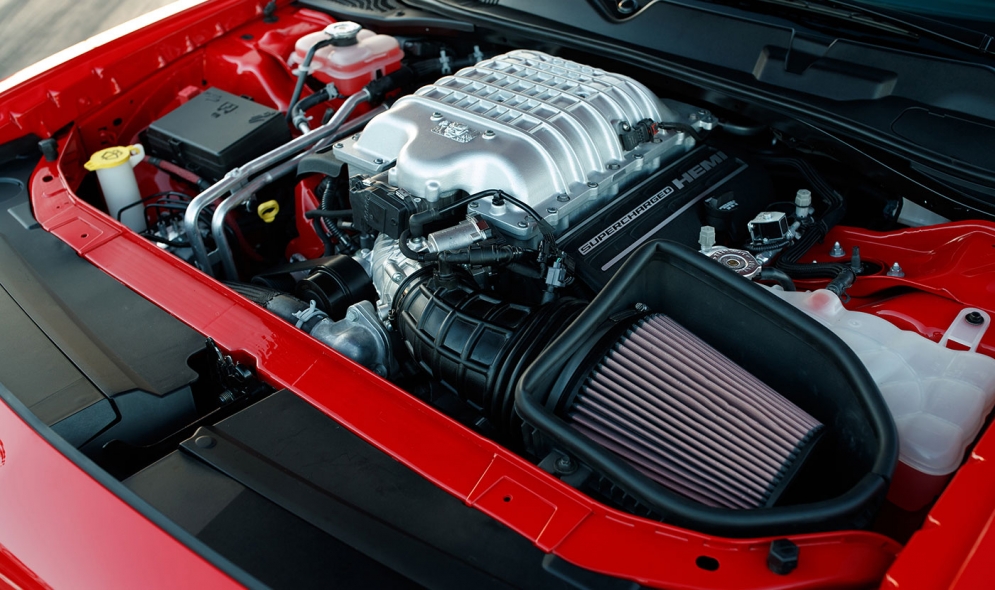 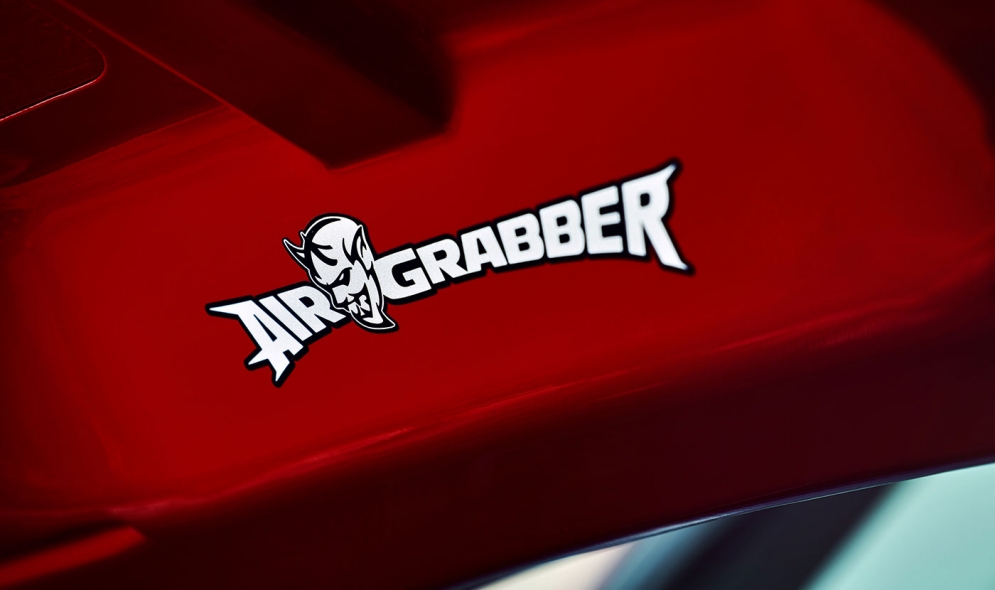 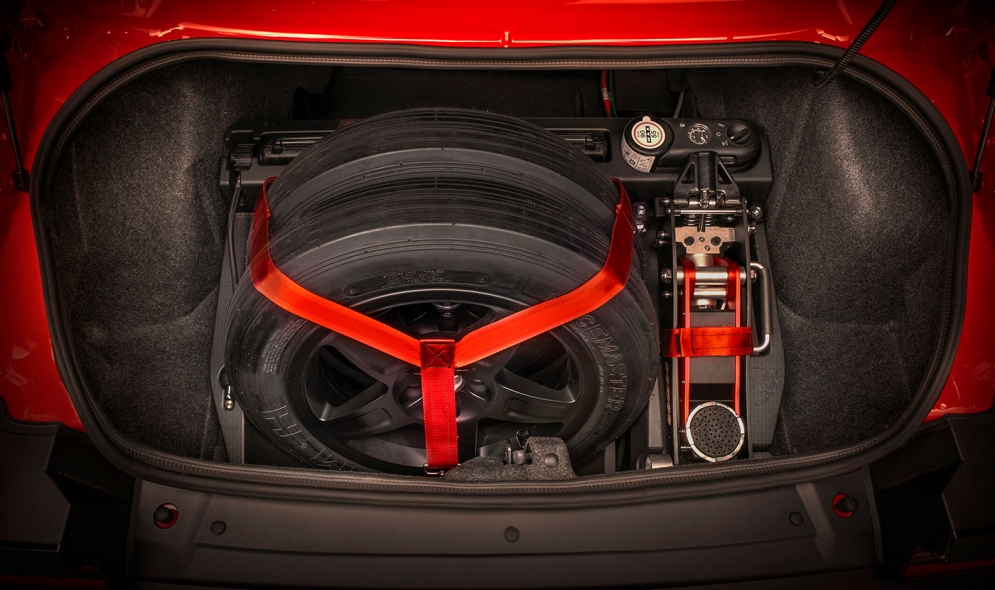 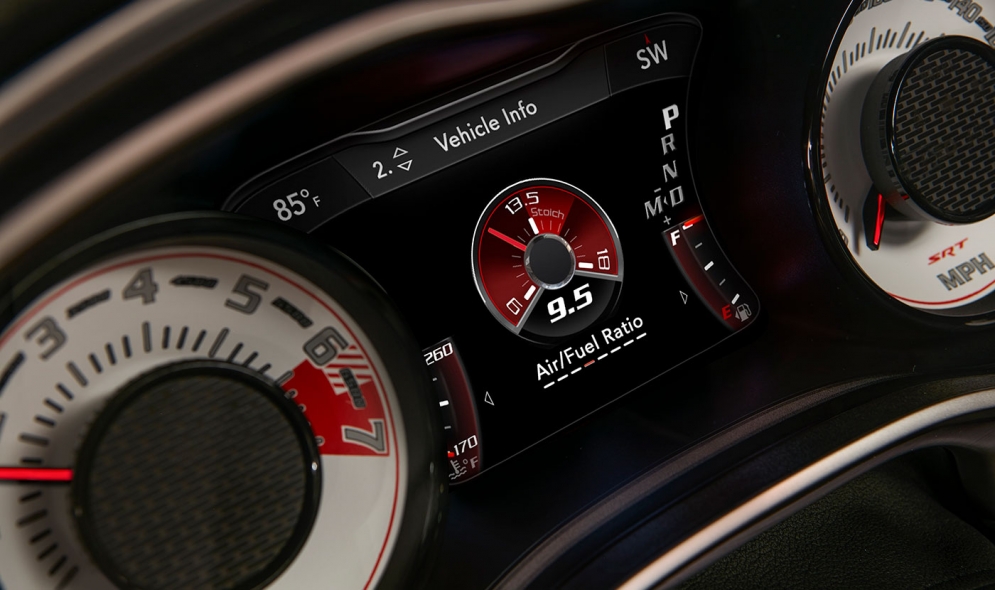 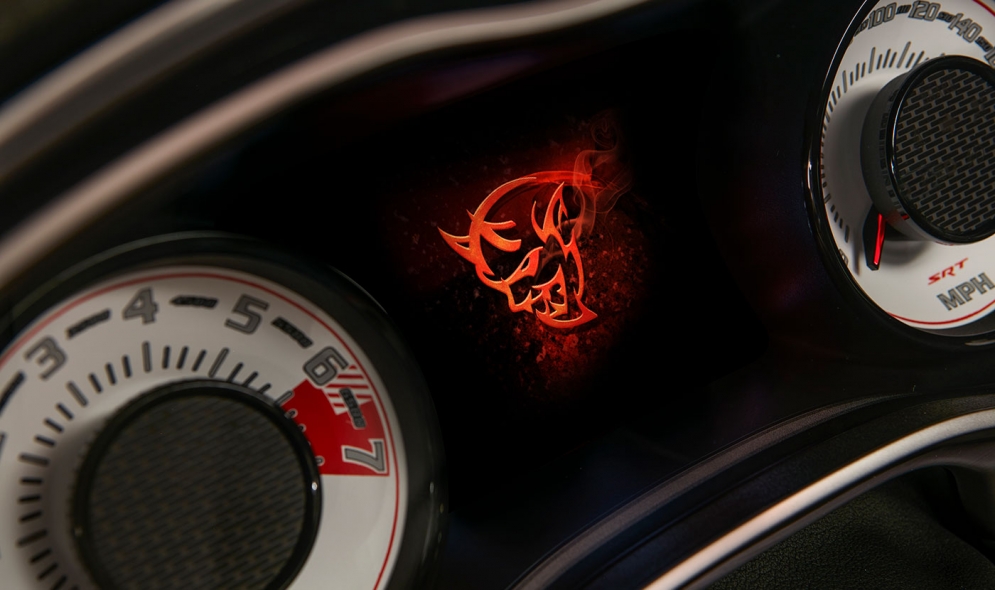 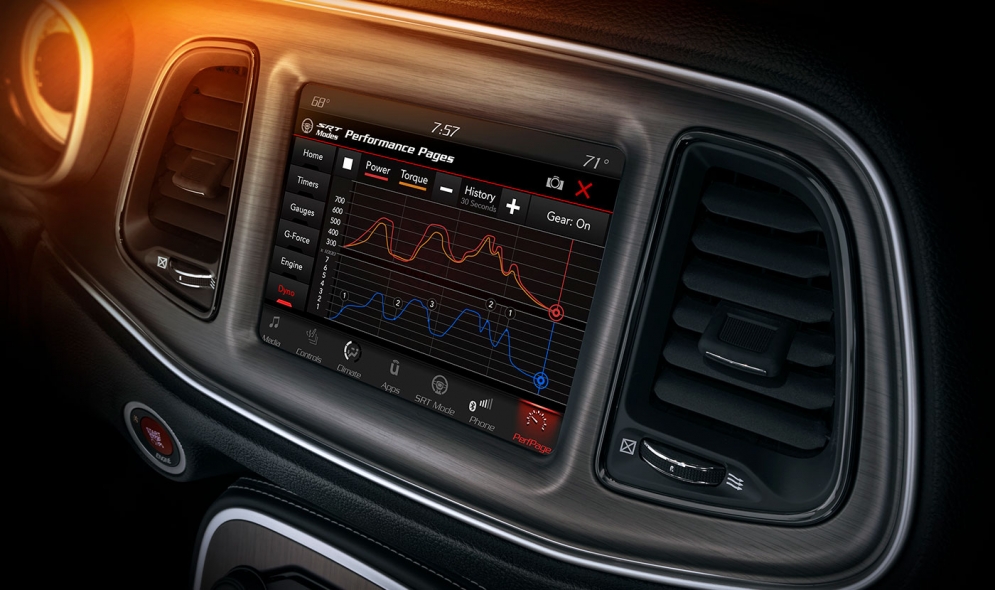 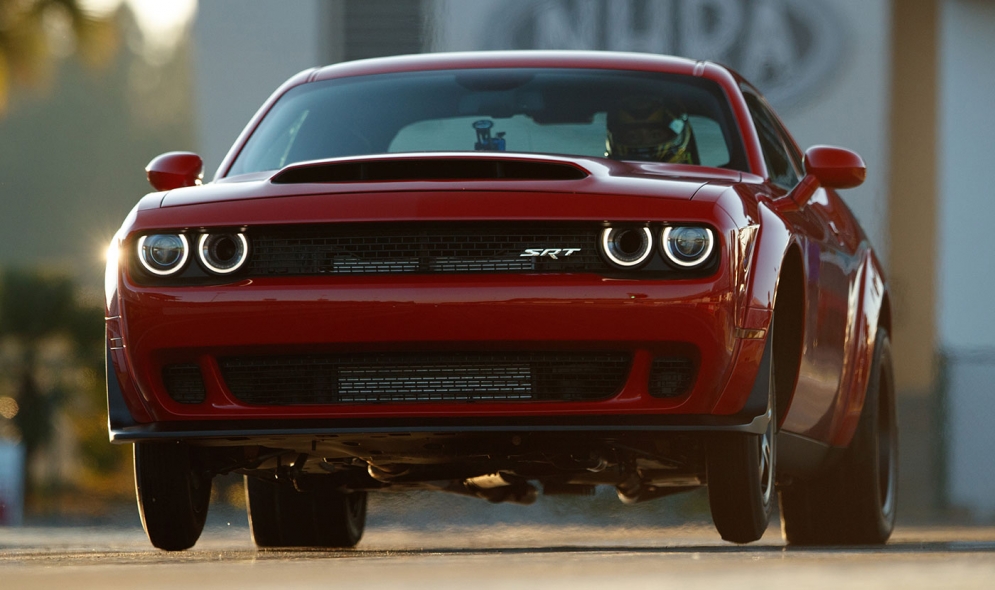 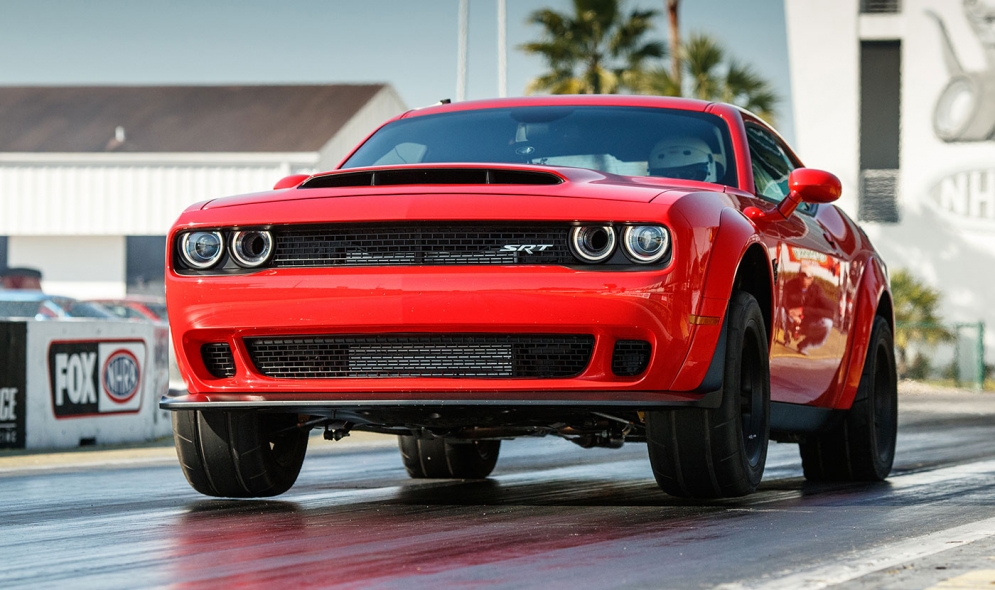 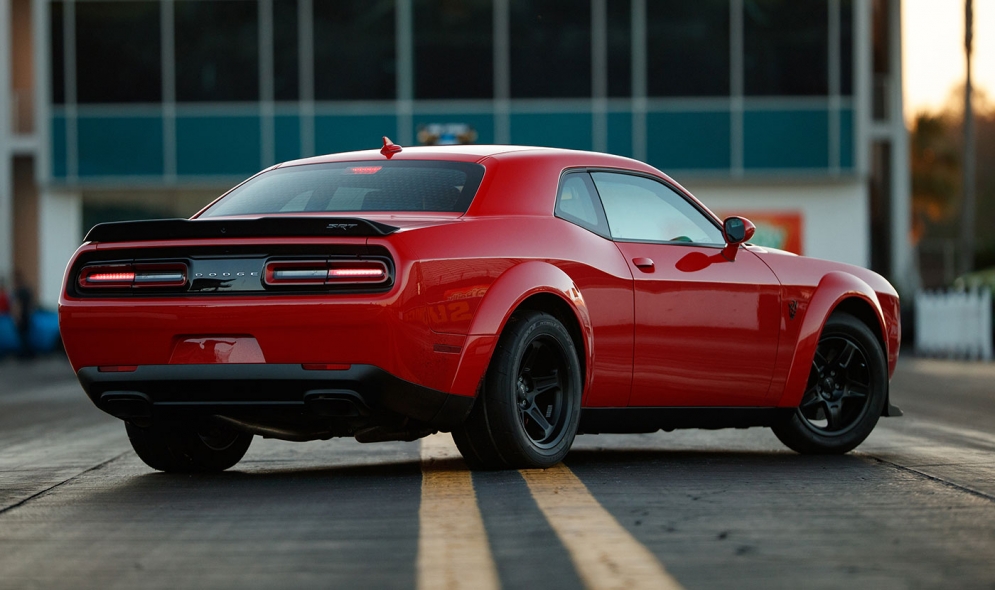 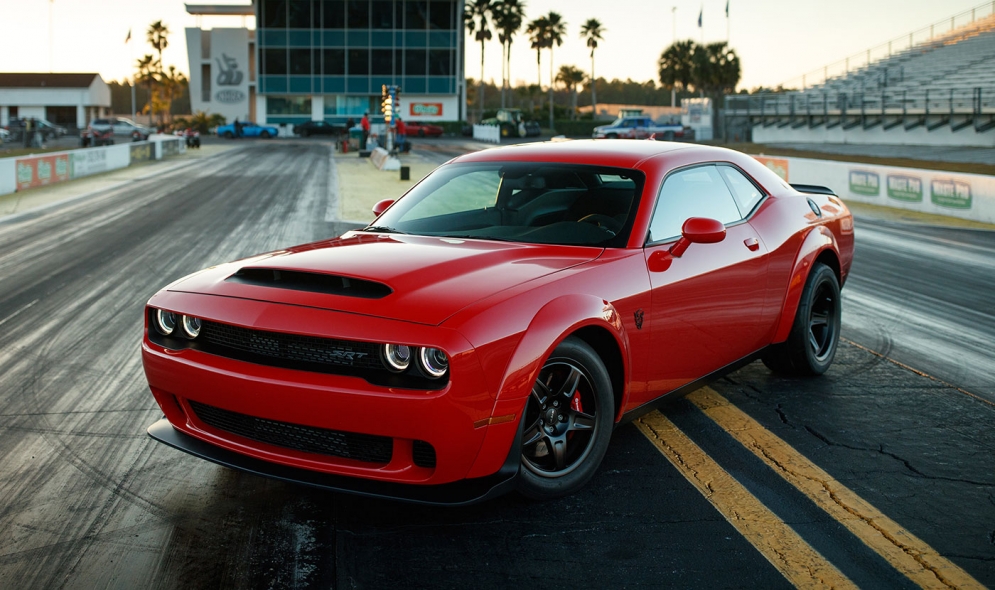 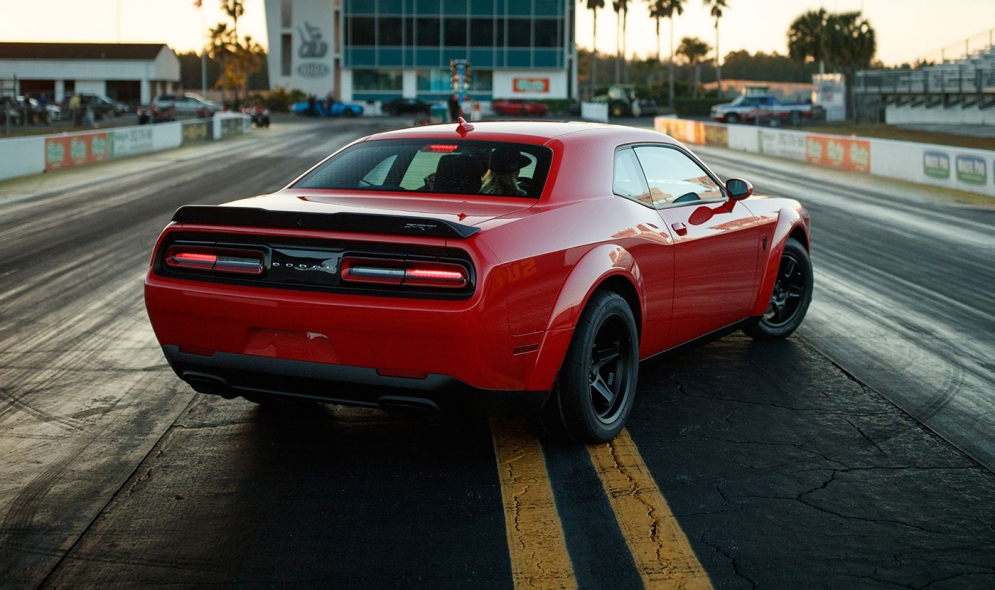 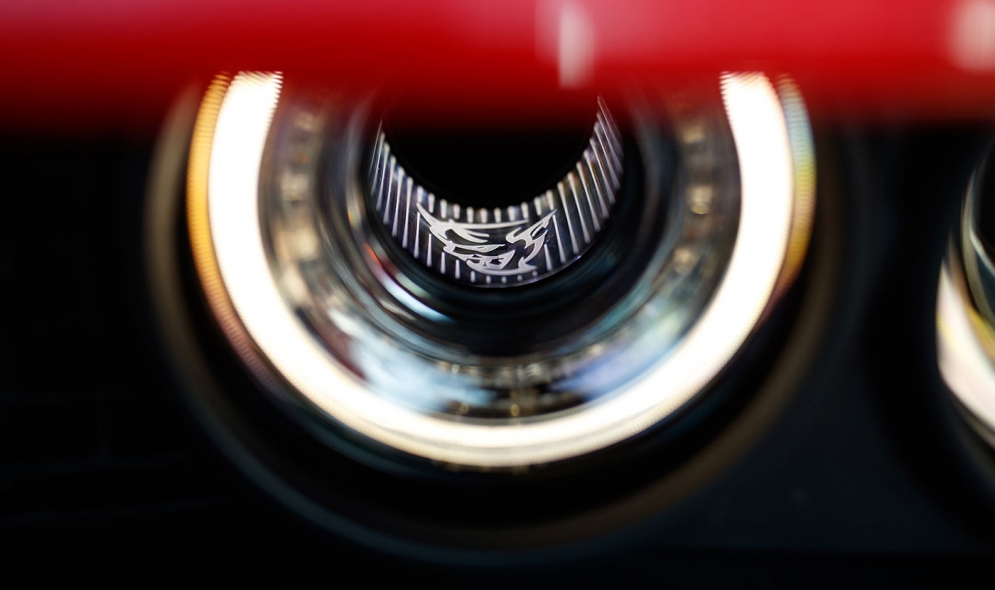 The Dodge Challenger SRT Demon, unveiled at the New York auto show, traded in the performance brand’s halo for horns with performance numbers normally associated with much more expensive brands.

To boost performance, the limited-edition Challenger Demon has a large hood scoop to boost cold-air intake. It sheds 232 pounds, in part by ditching all seats but the driver’s. It will be outfitted with nominally street-legal P315/40R-18 Nitto drag radial tires.

The columns below offer contrasting views on the wisdom of Dodge’s Demon. 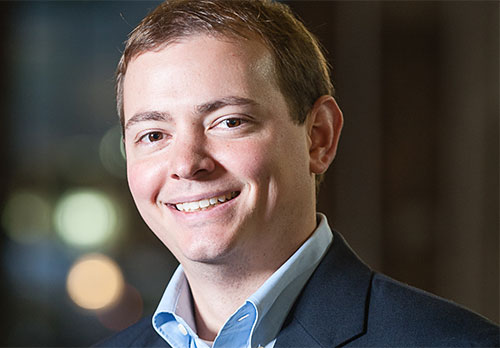 Mike Wayland is a staff reporter for Automotive News.

Dodge unveiled the 2018 Challenger SRT Demon to the cheers of muscle car enthusiasts that were comparable to the chants of devil worshipers if Lucifer himself came to Earth.

While some may consider the barely — barely — street-legal drag car’s $1 optional passenger seats, 840 hp and 770 pounds-feet of torque a bit outlandish, even morally irresponsible, it is an ingenious marketing move for a brand with an aging lineup and no new or redesigned vehicles expected anytime soon.

Dodge boss Tim Kuniskis hasn’t just resurrected the Demon nameplate — originally a variant of the 1971-72 Dart — he has reawakened the hysteria of the 707-hp Challenger and Changer Hellcat models that have been marketing halos for the brand going on three years now.

The Hellcats represent a sliver of the brand’s overall sales but have generated more media and marketing attention than anyone — even Kuniskis — could have imagined. Following the unveilings in 2014, Dodge was in the top five auto brands for the first time ever on Google Trends, a tracker of top-searched terms from the online search engine. It ranked third — behind Ford and Jeep — that year, and then second in 2015.

The Hellcats have put an end to discussions about the Challenger being too heavy and too slow to compete against the Chevrolet Camaro and Ford Mustang. They’ve also given the brand a launch pad for extravagant events, including thrill rides and drag racing, and street cred among car enthusiasts. 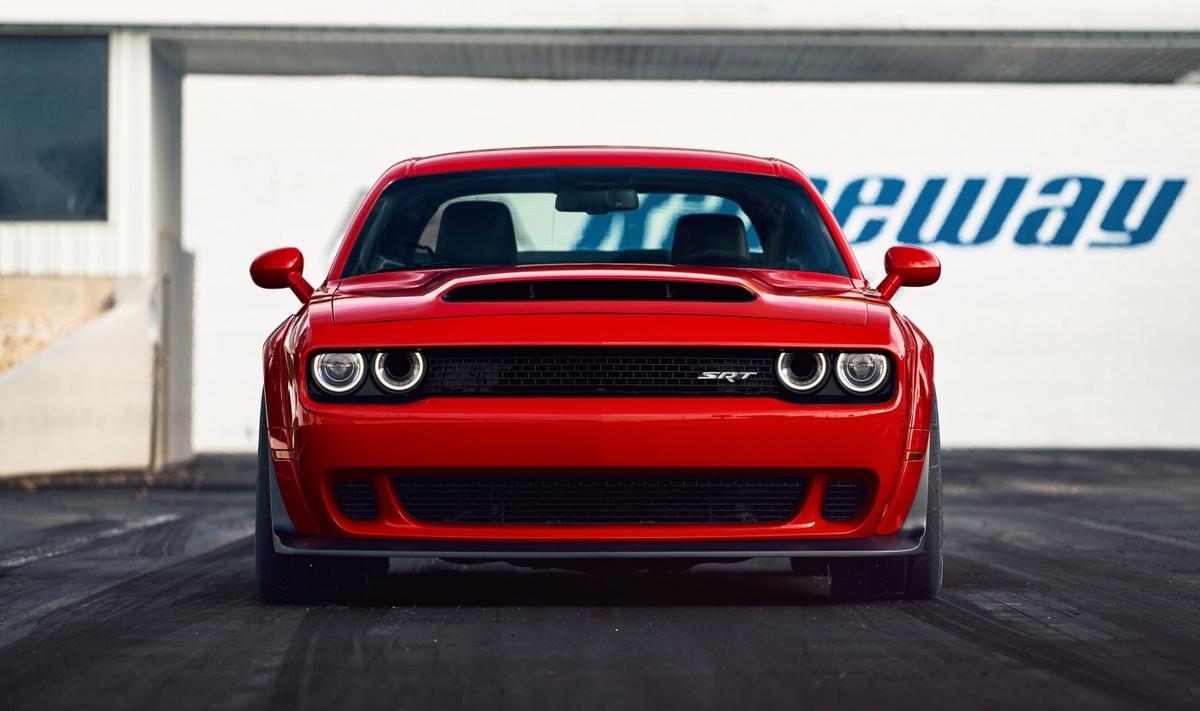 During the annual Woodward Dream Cruise — a muscle and classic car extravaganza in metro Detroit — Dodge and the Hellcats have become the talk of the town. In recent years, even Viper owners can be heard discussing whether a Hellcat engine could fit into a Viper (it can’t) or whether they should trade in their snake for the cat.

As my colleague Larry Vellequette reported earlier this month, Hellcat-mania is finally easing. Hundreds of new Charger and Challenger Hellcats are now discounted as much as $13,000 under sticker, according to ads on Autotrader. That’s a far cry from consumers paying thousands of dollars over sticker or putting down nonrefundable cash deposits for the cars.

Dodge is looking to the Demon to resurrect Hellcat hysteria, as the brand looks to stretch the LX platform for at least another three years and axes production of its traditional halo — the Viper — in August.

Kuniskis began leaking information to reporters about the Demon at the Detroit auto show in January. The brand followed with a 14-week lead-up that included weekly teaser videos for the Demon and tidbits of information about the car.

It was a painfully long launch, but the videos were a success. They’ve racked up more than 14.2 million views on Dodge’s YouTube page, including the Wednesday, April 12, reveal and two others released for the unveiling. Those are Super Bowl ad-type numbers.

Only time will tell if the single model year, limited-edition Demon can summon the attention of the Hellcats, but so far it seems to be working — that is, doing exactly what Dodge wants and needs.

You may email Staff Reporter Michael Wayland at [email protected].

BACK TO TOP
Richard's view: Call the paramedics 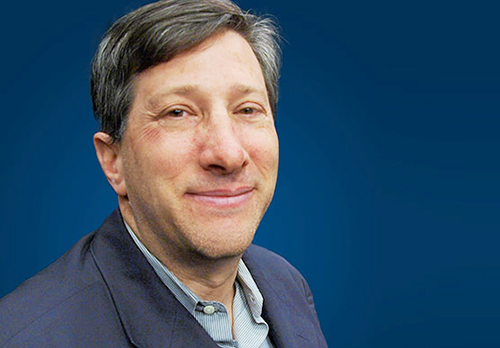 If absolute power corrupts absolutely, as Lord Acton famously said, then first responders around the nation may have their hands full when Fiat Chrysler Automobiles begins delivering the latest version of the Dodge Challenger, the SRT Demon.

Not just the cops; paramedics, too.

With 840 hp and 770 pounds-feet of torque, drag-racing tires that are nearly slick and barely legal, the car is an automotive weapon in all but the most skilled hands. Consider:

■ It is so fast and powerful that it has been banned from the drag strip by the National Hot Rod Association.

■ The engine makes so much power it can lift the car’s front wheels off the ground.

This won’t be a popular stance, and people will be angry and disagree, but here goes: For FCA to build a car like this, one that can be legally driven off the dealer’s lot, is nothing short of irresponsible. It’s an act of desperation by a company whose cars are getting really old. Consider that the Challenger itself is 8 years old, and the platform it rides on is from well into the last century.

You can do a search for “Hellcat crash” on Google or elsewhere and turn up videos, photos and stories of people who have been hurt or killed themselves and others wrecking the Challenger with the 707-hp version of the 6.2-liter Hemi V-8. Some of those crashes came within just miles of driving it off the dealership lot for the first time. 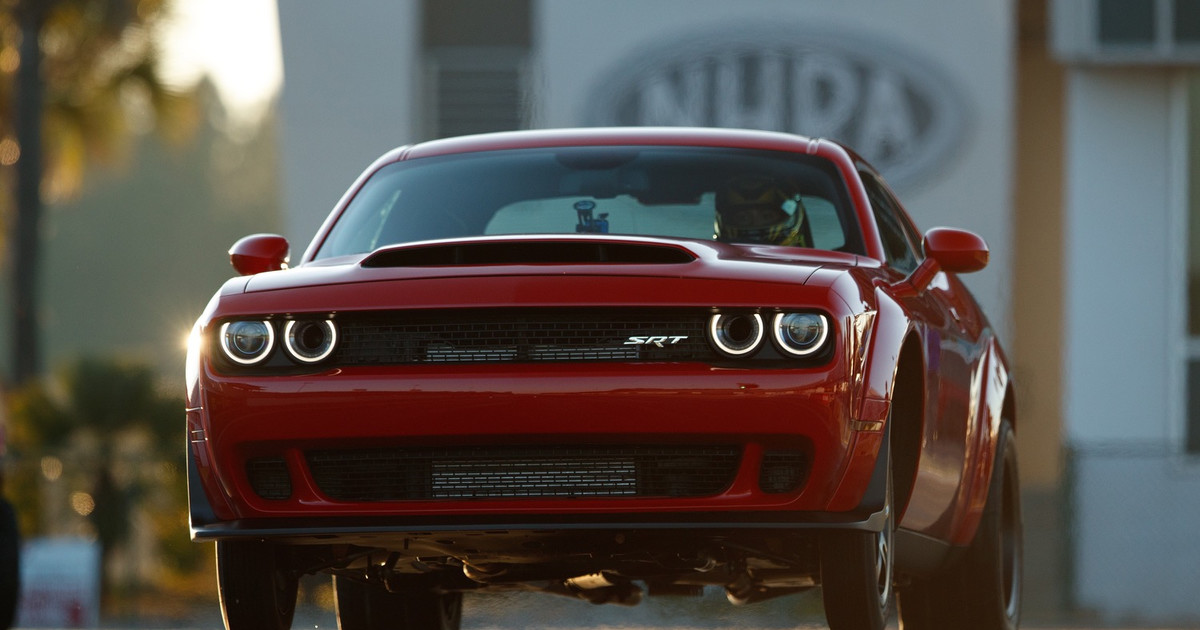 I grew up in an era when more horsepower was always better. General Motors’ 455-cubic-inch performance V-8s from the early ’70s, Chrysler’s 426 Hemi and Ford’s 427, 428 and 429 V-8s were highly coveted. Before increasingly strict emissions standards choked off power and expensive gasoline dried up buyers’ thirst for more, the highest horsepower engines topped out at a sane and manageable 425 or so.

FCA says there are no special requirements — no training at the dealership, no mandatory racing-school attendance — needed to buy a Challenger SRT Demon. Anyone can show up at the dealership with the money and drive it home. That is also irresponsible.

FCA offers a free track day for potential owners, but attendance is not required.

FCA keeps turning up the horsepower on its aging Charger, Challenger and Jeep Grand Cherokee to mask the age of their designs and platforms. Every one of those vehicles is still riding on a platform that came from Daimler — three owners ago.

There’s a reason drag-centric cars such as this from other automakers or specialty equipment manufacturers aren’t given a vehicle identification number: They present a clear and present danger to not only their drivers, but to the motoring public.

That FCA is able to skirt those regulations with the Demon says to me that the rules should be significantly tightened.

FCA is offering the SRT Demon for the 2018 model year only and limiting production to 3,000 for the U.S. and 300 for Canada. For safety’s sake, let’s hope most never see street use and end up in private collections and museums, where the cars can’t hurt anyone.

You may email Staff Reporter Richard Truett at [email protected].