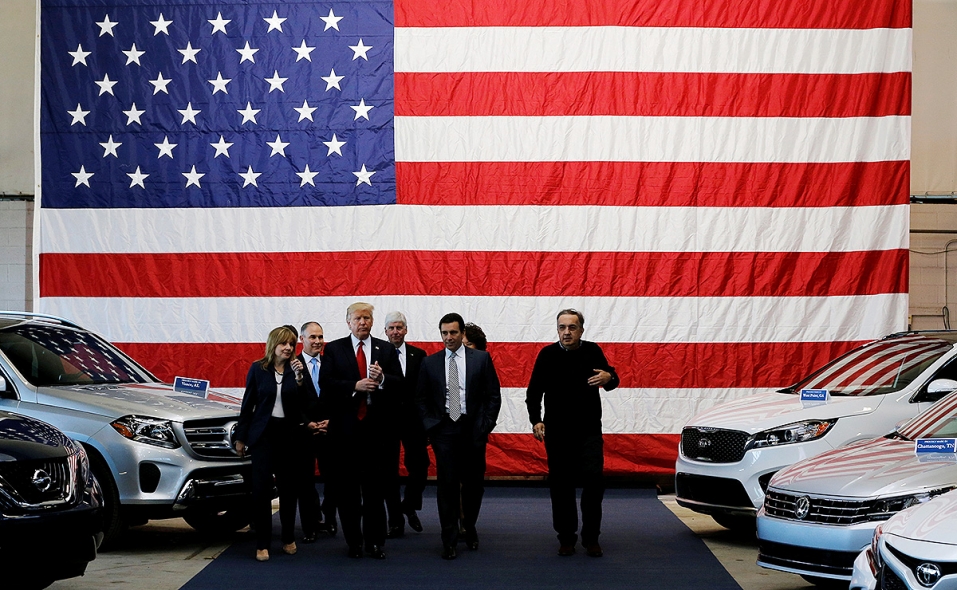 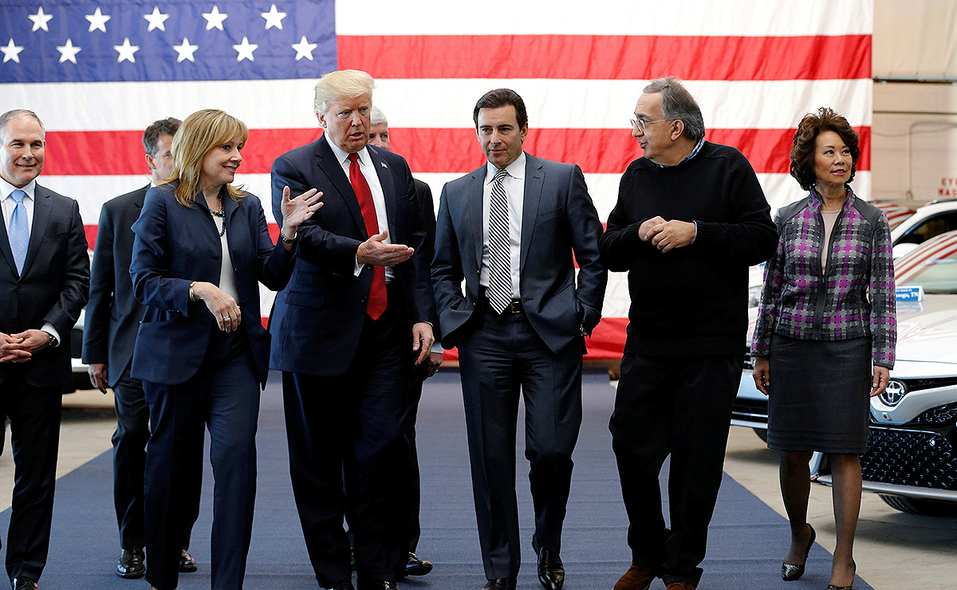 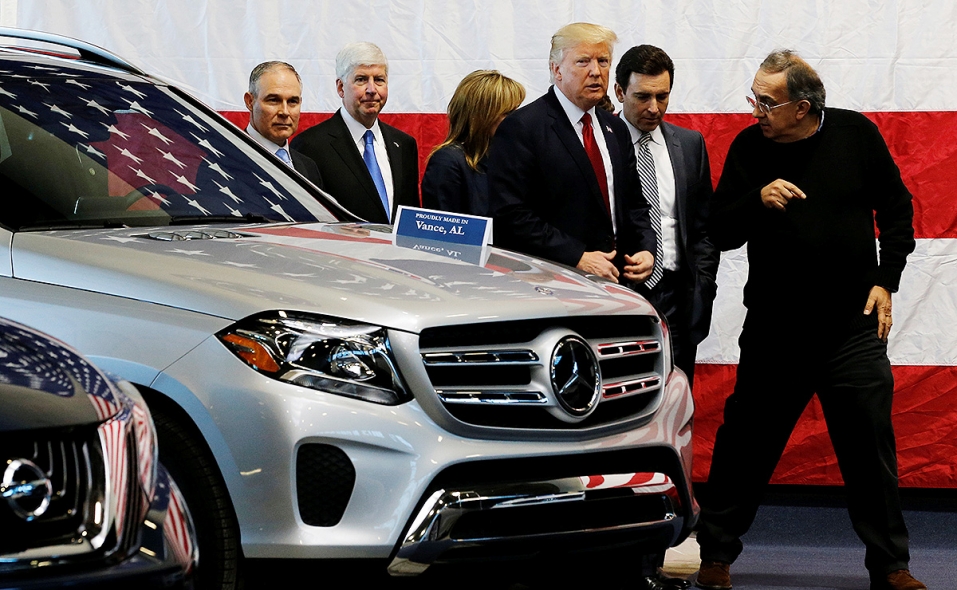 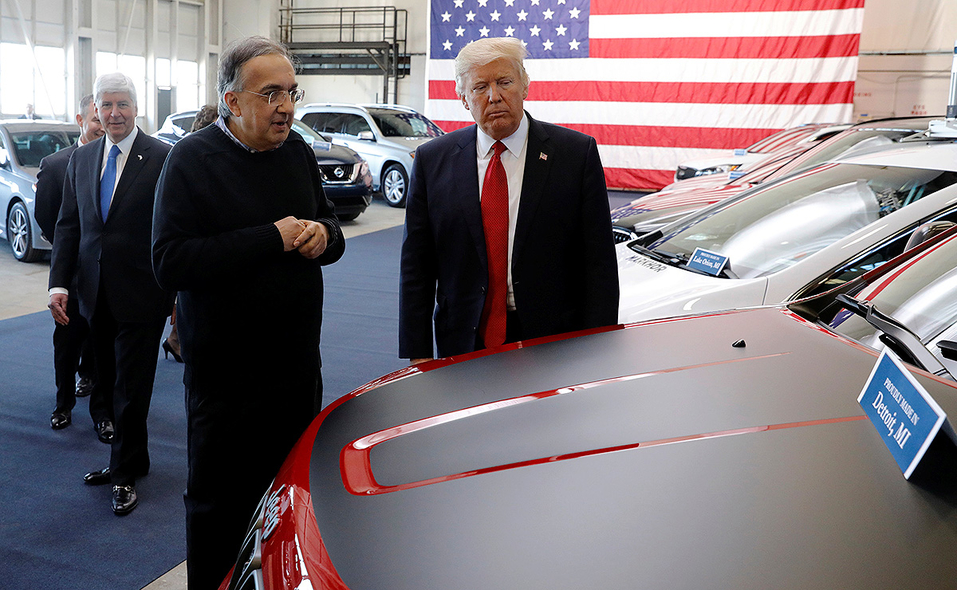 REUTERS
The suit is the latest blow to FCA CEO Sergio Marchionne, pictured earlier this year at an event in Michigan with President Donald Trump.
Share 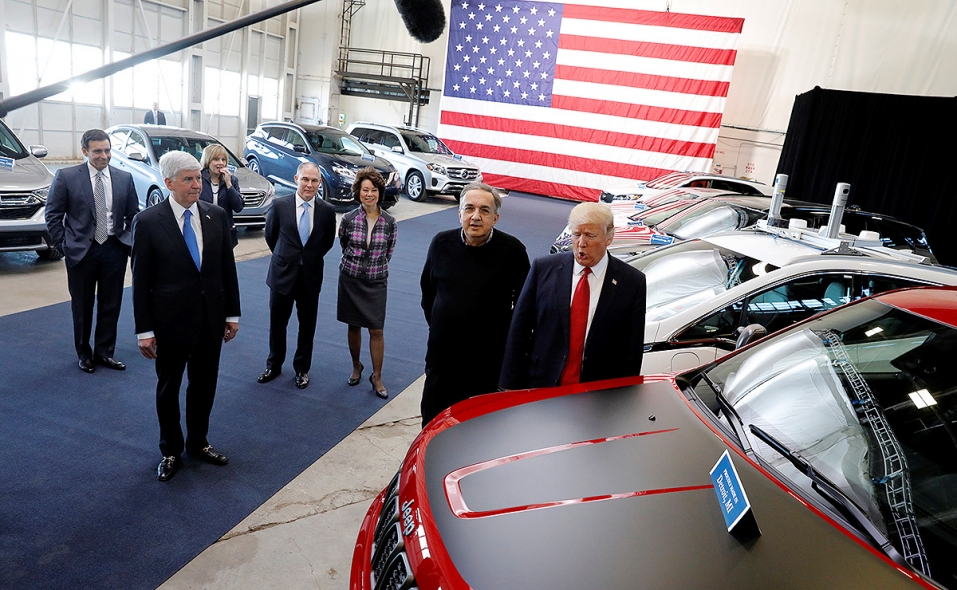 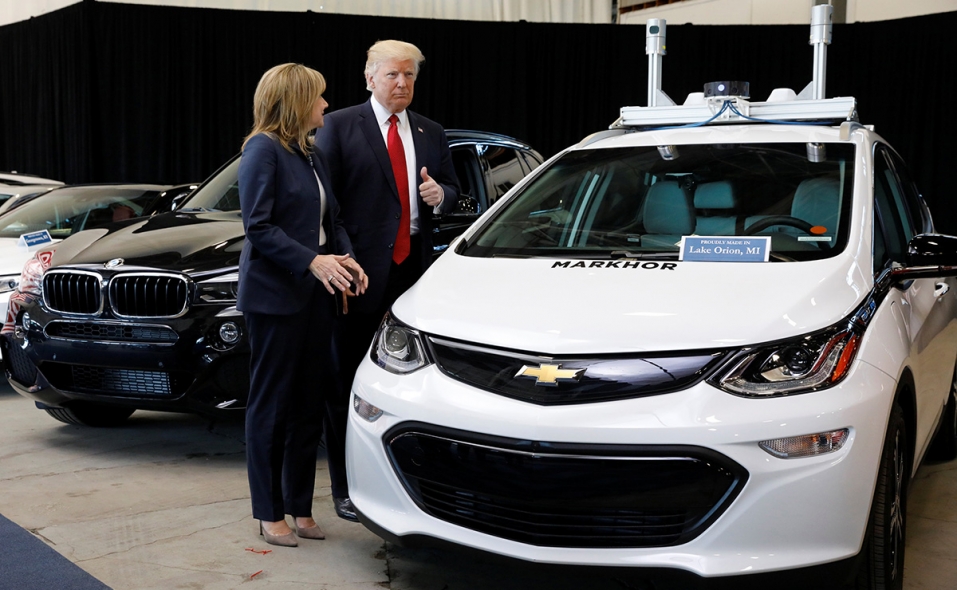 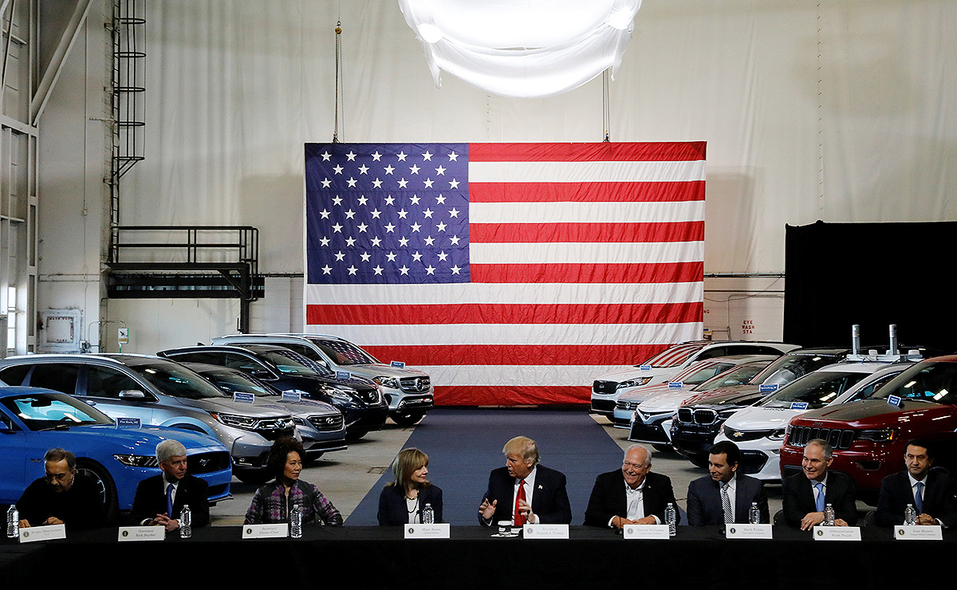 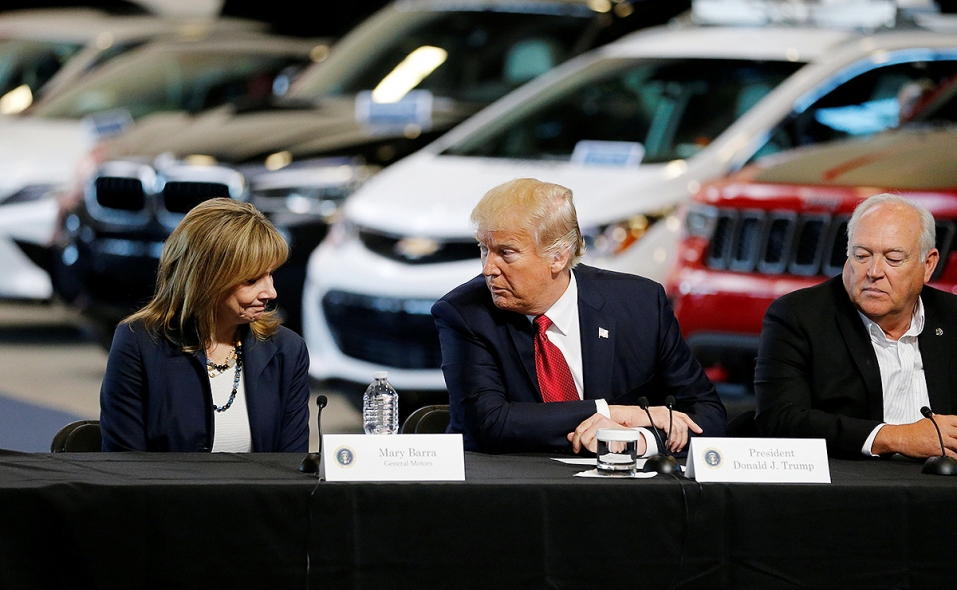 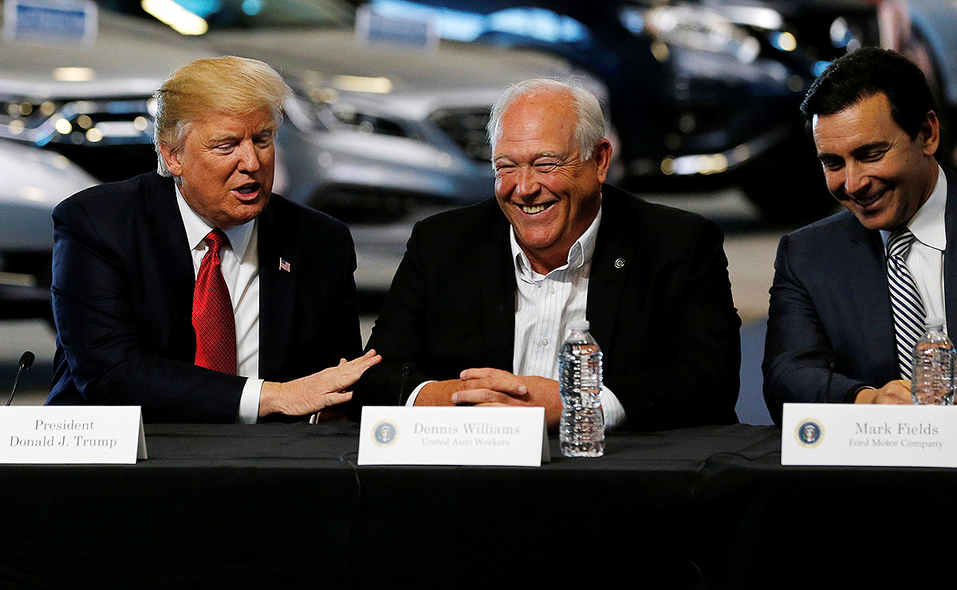 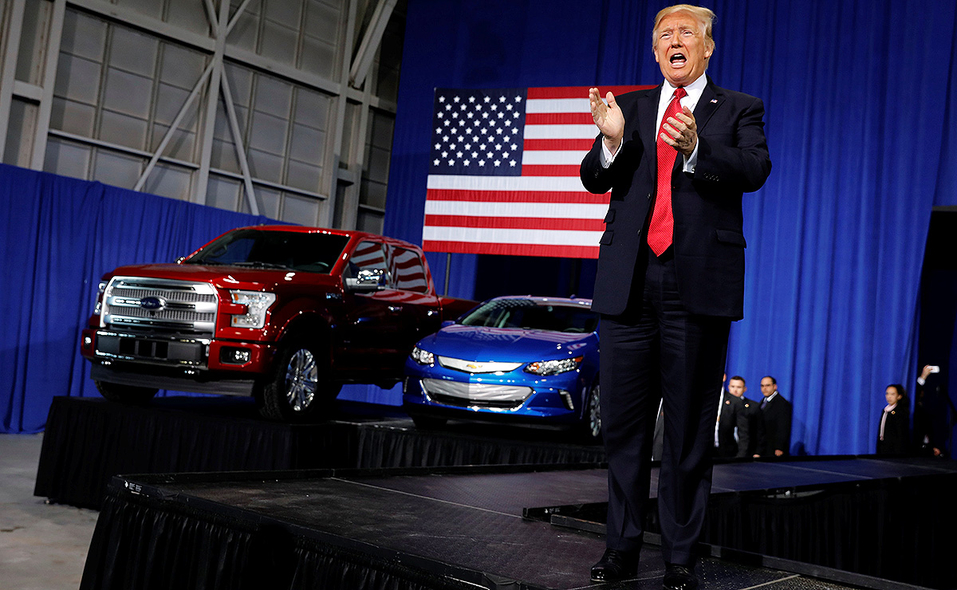 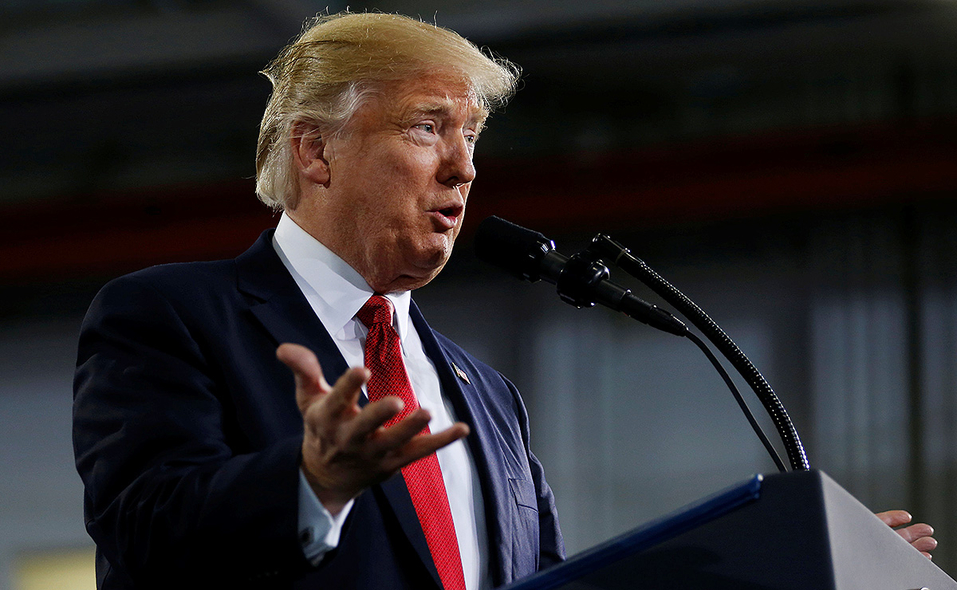 "One of Trump's greatest strengths could be his ability to shake Washington out of its stupor and implement an agenda that can grow the economy and put millions of Americans back to work," McLarty writes. 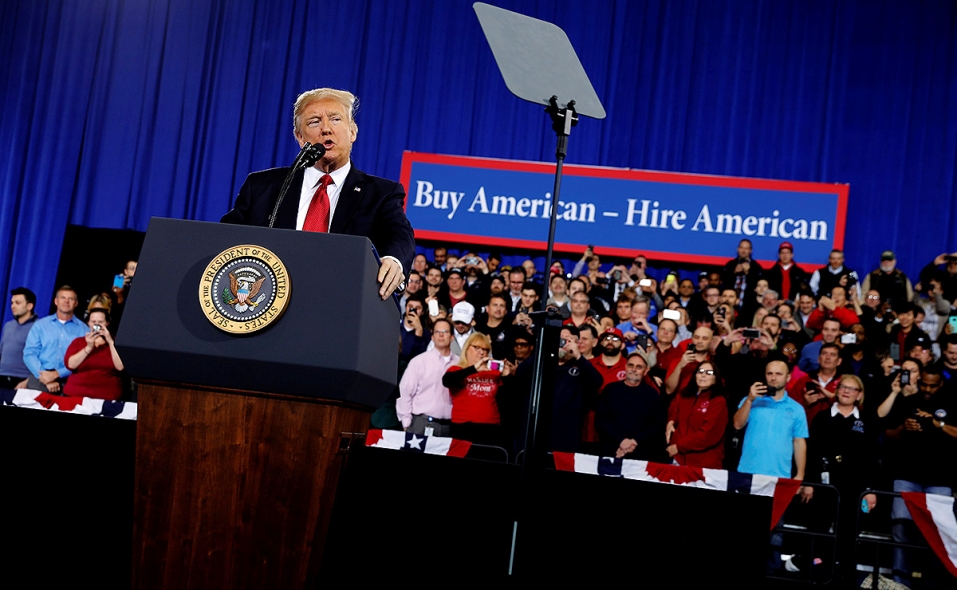 DETROIT -- President Donald Trump on Wednesday said his administration will reopen a review of Obama-era auto emissions mandates, welcome news for automakers that argue the strict standards are costly and out-of-touch with market realities.

The president, speaking at the American Center for Mobility -- a planned $80 million autonomous vehicle testing ground on the site of the former Willow Run bomber plant -- promised to bring back manufacturing jobs to bolster the industry in the U.S.

“We’re going to work on the CAFE standards so you can make cars in America again,” Trump said. “There is no more beautiful sight than an American-made car.”

The reopening of the midterm review does not mean the standards will be weakened, but it does give automakers the opportunity to push for relief by lobbying new EPA Administrator Scott Pruitt, who has downplayed the effect humans have on climate.

"We're going to do some wonderful work with you but you're going to have to help us with jobs,” the president said at the roundtable, according to a White House pool report. "I know you're all competitors," Trump said, but asked the CEOs to build modern plants "like you've built in Mexico."

No automaker has made a commitment to build a new plant in the United States. According to Edmunds, 53.4 percent of vehicles sold at retail in the U.S. were made at a U.S. plant. In comparison, 10.9 percent originated from Japan, 10.6 percent in Mexico, 10.5 percent in Canada, 6.4 percent in South Korea and 4.1 percent in Germany, Edmunds said.

Williams said he appreciates Trump being there, but he is worried about environmental standards for the automobile industry.

Days before the Trump administration took office, the EPA announced it would keep intact strict mandates that require automakers raise their fleetwide fuel economy average to 54.5 mpg by 2025.

The 11th-hour decision by the EPA closed the door on a midterm review of the standards, which automakers hoped would be relaxed in the wake of $2-a-gallon gasoline and shifting consumer preference away from small cars, factors not in place when the standards were first agreed to in 2011.

The EPA estimated under Obama that the costs required to meet the standards through 2025 would be about $33 billion. It also assessed that advantages including fuel savings and energy security would outweigh the costs of the rules and lead to about $98 billion in net benefits.

Trump’s decision to reopen the review was met with criticism by some Democrats and environmental groups.

“EPA conducted a robust review of these standards for nearly two years, taking into account the input from automakers, including thousands of pages of technology and cost assessments, and concluded that the standards were appropriate,” Shannon Baker-Branstetter, policy counsel for Consumers Union, said in a statement. “By rejecting the EPA’s final determination now, its new Administrator is signaling the agency plans to weaken the standards instead.”

Sen. Ed Markey, D-Mass., said on Twitter that the decision is wrong for consumers and would result in them paying more at the pump.

Trump said the midterm review was necessary because the standards were set far into the future.

“If the standards threaten auto jobs, then common sense changes could have and should have been made,” he said.

In re-opening the original midterm review, Trump said the focus will be on keeping jobs.

“We are going to ensure any regulations we have protect and defend your jobs,” Trump said. “We’re going to be fair.”

"Whatever the outcome is I'll feel better about the process," Marchionne told reporters after the event. "Somebody actually shortcut the system itself. That was not the intent when the 2025 rules went in place. We all agreed 2017-18 would be used to carry out a thorough midterm review with the full participation of the auto industry. I know for a fact we weren't called in."

Marchionne said the Obama administration's decision to end the review a week before Trump took office was not right.

“NADA applauds the Trump Administration for reaffirming our shared commitment to a transparent, fair and data-driven midterm review of fuel-economy standards," NADA CEO Peter Welch said in a statement.

"Maintaining vehicle affordability is critical to actually building on the progress the industry has already made on increasing fuel economy and lowering vehicle emissions. As dealers, our top priority will always be ensuring that working men and women have the ability to purchase the fuel-efficient cars and trucks they need at prices they can afford."

Snyder, who didn't endorse Trump during the 2016 election, praised the decision.

"I thought that was very positive and you can see positive feedback from the auto industry," he said. "That's what they believed was going to happen. It's an opportunity to make sure they can stay as competitive as possible providing great products to our citizens."

Use the midterm review to keep progress on track