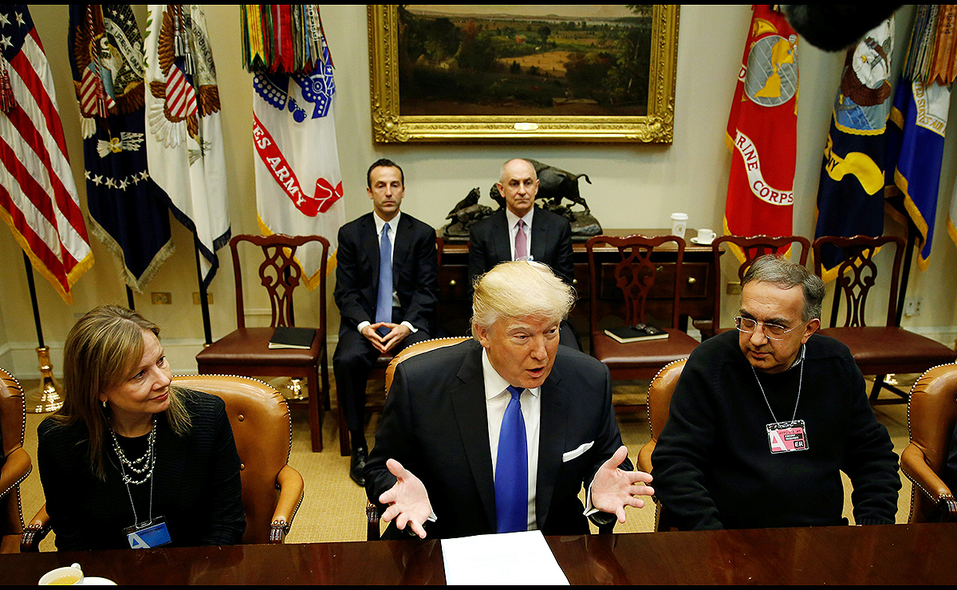 President Trump is expected to meet with the Detroit 3 CEOs on Wednesday. All three already have met with him at the White House.
Share 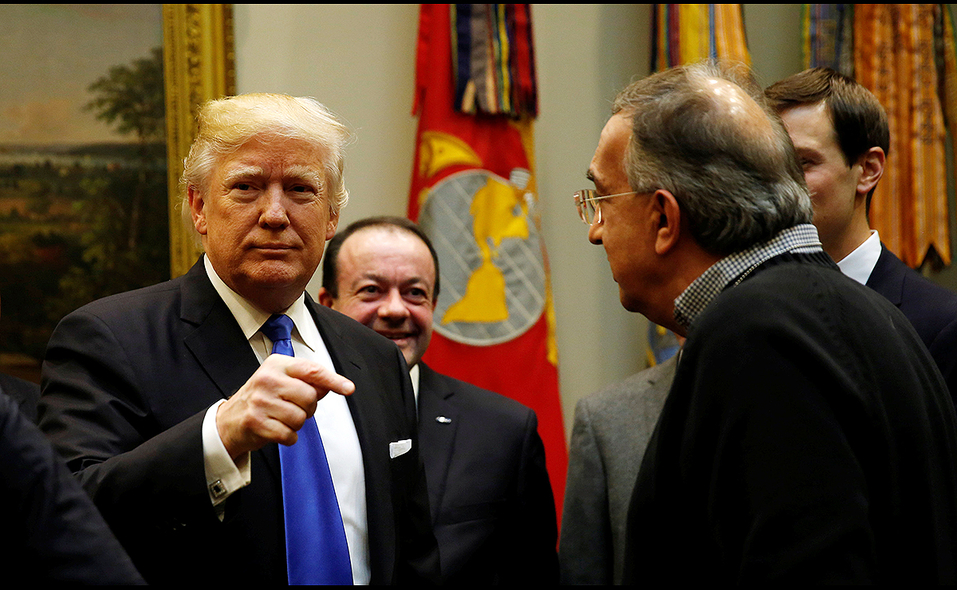 FCA CEO Sergio Marchionne said he did not raise the company's diesel emissions issue with President Donald Trump when he met with auto CEOs in January.
Share 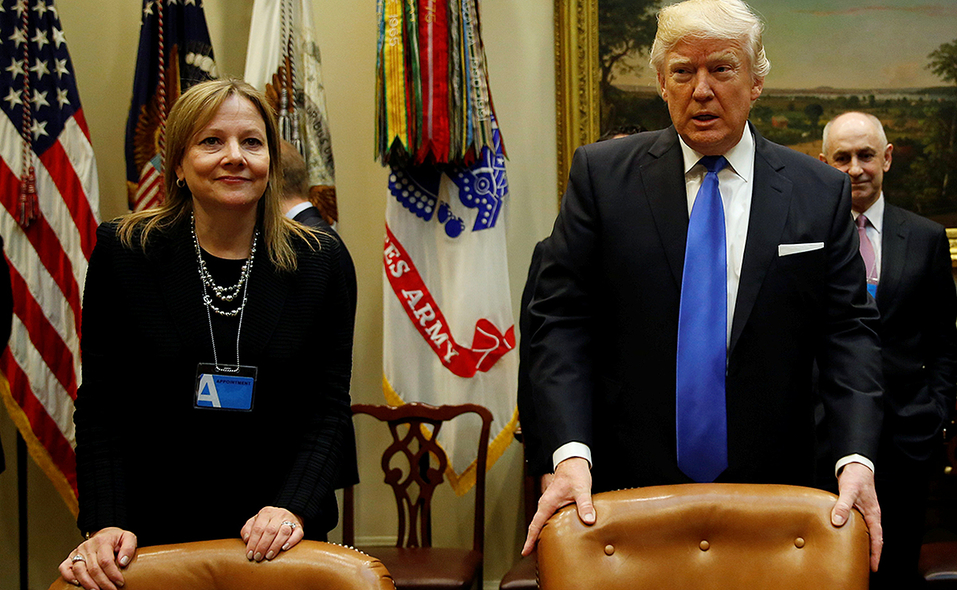 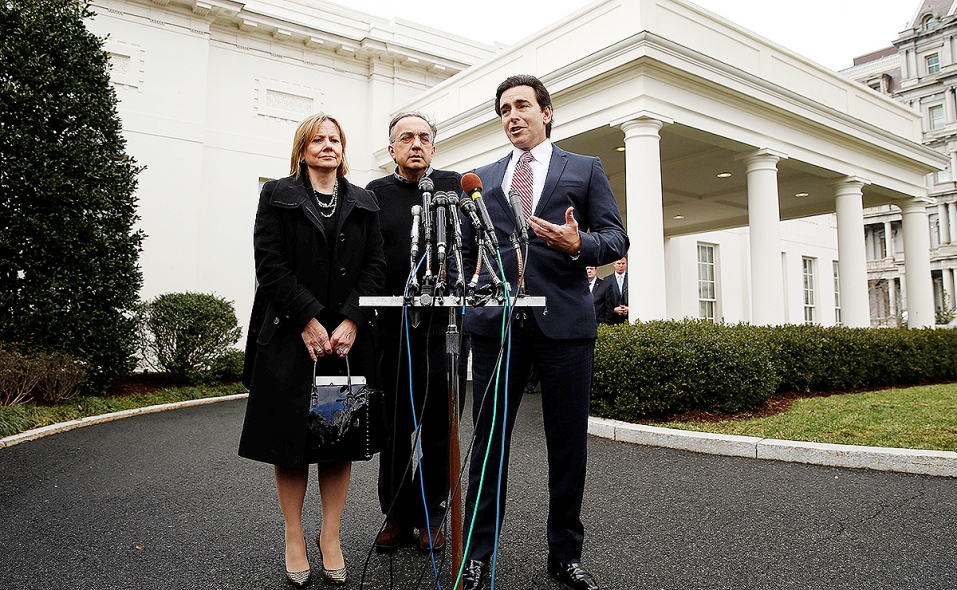 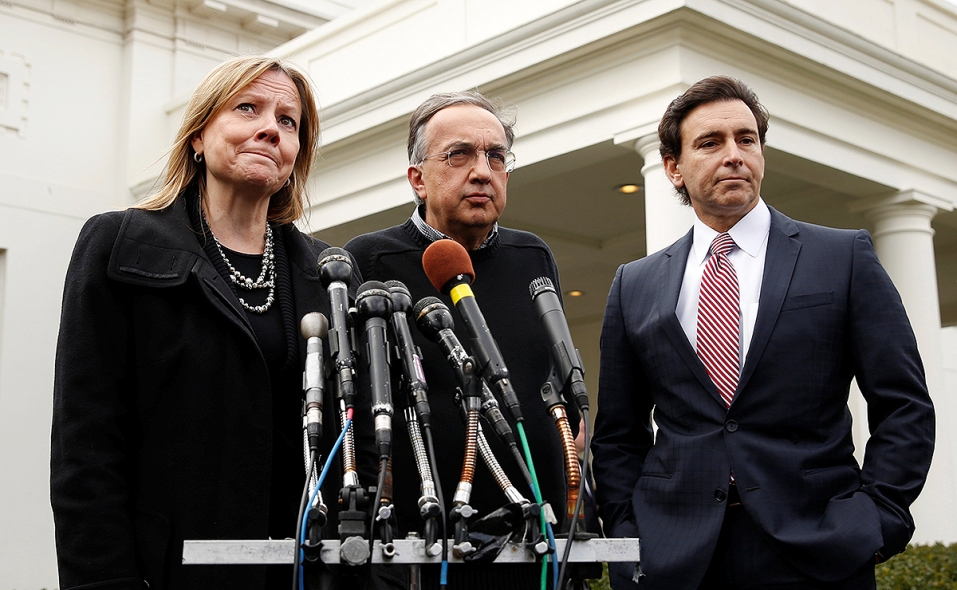 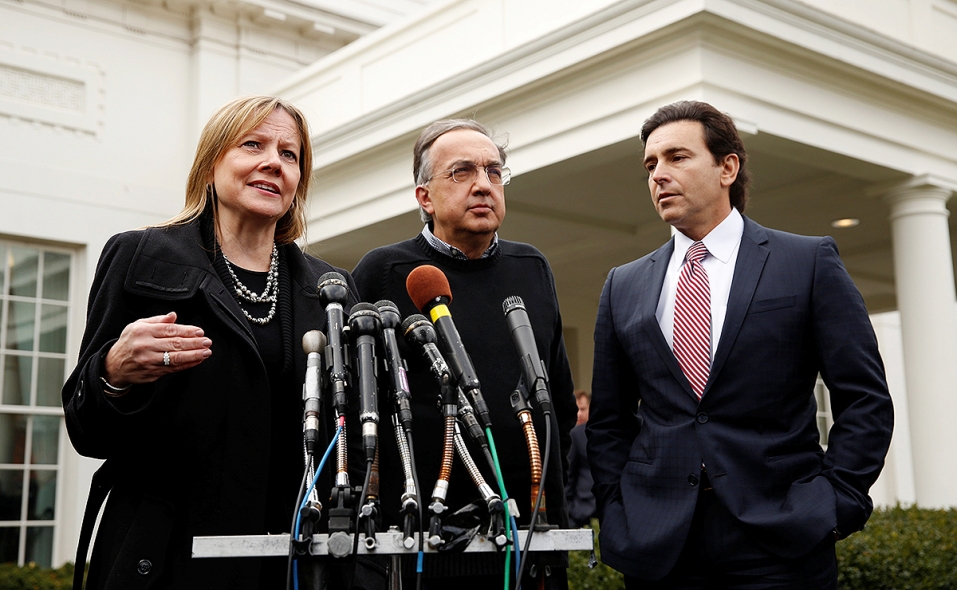 WASHINGTON/DETROIT -- President Donald Trump met Tuesday with the CEOs of the Detroit 3 automakers as he looks to persuade car manufacturers to keep production within the country.

"We have a very big push on to have auto plants and other plants -- many other plants," Trump told reporters at the meeting. "It's happening."

Before the meeting, he tweeted: “I want new plants to be built here for cars sold here!”

The heads of Ford Motor Co., Fiat Chrysler Automobiles and General Motors attended the meeting at the White House. The meeting presents Detroit’s automakers with a key opportunity to weigh in on major issues the administration plans to tackle in its earliest days, including trade, regulatory and tax reforms.

“He looks forward to hearing their ideas, on how we can work together to bring more jobs back to this industry in particular,” White House press secretary Sean Spicer said.

Trump told the CEOs that environmental regulations are "out of control" and promised he would remove obstacles for manufacturers and oil companies. The president reiterated his desire to reduce regulations, which may indicate a willingness to scale back federal fuel-economy demands.

“I am, to a large extent, an environmentalist,” Trump told the auto executives. “I believe in it. But, it’s out of control.”

Tuesday's gathering was the first time the CEOs of the big three automakers have met jointly with a U.S. president since a 2011 session with Barack Obama to tout a deal to nearly double fuel efficiency standards by 2025.

Marchionne told reporters after the meeting that Trump did not give them specifics on what regulations he would cut.

GM, Ford and FCA have all announced recent new jobs and investments in the U.S., but are still investing in Mexico. Fields said automakers wanted to work with Trump to create a "renaissance in American manufacturing."

"We're very encouraged by the president and the economic policies that he's forwarding," Fields told reporters, praising Trump's decision to withdraw from the Trans-Pacific Partnership agreement, which Fields said did not address intervention in currency valuations by trading partners. "As an industry we're excited about working together with the president," he said.

Barra said there was a "huge opportunity" to work together with the government to "improve the environment, improve safety and improve the jobs creation."

Trump met Monday with prominent American manufacturers including Fields and Elon Musk, the head of Tesla Motors Inc., and said he would dramatically cut regulations and corporate taxes. But Trump said manufacturers would face tough penalties if they move production outside the country.

Barra, Marchionne and Fields gave brief remarks to journalists shortly after their meeting with the president.

After the meeting, Fields said he was confident Trump was “very serious on making sure the United States economy is going to be strong and have policies -- on tax, regulatory or trade -- to drive that.”

Trump has openly agitated for U.S. automakers to keep jobs in the U.S. and cancel plans to build plants abroad.

“Car companies and others, if they want to do business in our country, have to start making things here again. WIN!” Trump tweeted on Sunday.

Barra, in a statement issued after the meeting, said it was a "very constructive and wide-ranging discussion about how we can work together on policies that support a strong and competitive economy and auto industry, one that supports the environment and safety.

"The U.S. is our home market and we are eager to come together to reinvigorate U.S. manufacturing. We all want a vibrant U.S. manufacturing base that is competitive globally and that grows jobs. It's good for our employees, our dealers, our suppliers and our customers."

Marchionne, in a statement, said: "I appreciate the President's focus on making the U.S. a great place to do business. We look forward to working with President Trump and members of Congress to strengthen American manufacturing."

He said, in total, FCA has committed investments of more than $9.6 billion in its U.S. manufacturing facilities and created 25,000 new jobs to date since 2009.

With flattening U.S. auto sales and some excess capacity, U.S. automakers may be reluctant to agree to open new plants, which likely would not come online for several years.

Barclays auto analyst Brian Johnson said in a note Tuesday that he thinks "automakers will be willing to make a deal that would bring back jobs to the U.S. (whether by voluntary commitments or tariffs or border taxes is less clear) in return for a slower ramp of (fuel efficiency) targets and related state-level mandates.

While automakers are adding U.S. jobs they are also cutting U.S. small car production. On Monday, GM ended two shifts of production of small cars in Ohio and Michigan, cutting about 2,000 jobs.

All three automakers have given Trump fodder for promoting his efforts to boost U.S. hiring. Ford canceled a $1.6 billion car assembly plant in Mexico and has said it will spend $700 million to expand a Michigan factory instead. GM and Fiat Chrysler have each pledged $1 billion in investment toward domestic assembly, though both companies have said their plans were made prior to Trump winning the election.

GM hasn’t announced any step back from plans announced in late 2014 that it would spend $5 billion on new plants in the country by 2018, creating 5,600 jobs. Fiat Chrysler has seven facilities south of the border building parts as well as Ram trucks and vans, Fiat 500 small cars and Dodge Journey sport utility vehicles.

In November, the Alliance of Automobile Manufacturers sent an eight-page letter to the Trump transition team with a series of recommendations, including aligning programs run by the EPA and the National Highway Traffic Safety Administration. Inconsistent rules threaten to saddle the industry with “potentially billions of dollars in fines,” said the trade group, which represents most of the world’s biggest automakers including GM, Ford, Toyota and Volkswagen AG.

The alliance asked for a presidential panel to review all auto regulations, including fuel-economy rules, as consumers continue to reject efficient cars and electrified vehicles in favor of pickups and SUVs.

“The combination of low gas prices and the existing fuel efficiency gains from the early years of the program is undercutting consumer willingness to buy the vehicles with more expensive alternative powertrains,” the group said.