What they're saying about autonomous technology

September 11, 2016 01:00 AM
Dave Guilford
Print
In the aftermath of the crash, consumers remain optimistic that autonomous drive is the "next big thing in the auto space," a study shows.
Behind the study
MavenMagnet, a social data research company with offices in New York and Mumbai, India, conducted this study.

The study analyzed 3,081 conversations from Jan. 1 to Aug. 15. The conversations were evenly distributed before and after news of the fatal crash of a Tesla using Autopilot became public on July 30.

MavenMagnet analyzes data from all digital sources — including social networks, communities, forums, chat rooms and product reviews — to provide insights about U.S. attitudes toward emerging and rapidly evolving topics such as autonomous vehicles. Its work for corporate clients has included analysis of more than 40 vehicle nameplates.

Safety is the primary factor driving consideration - positive or negative - for autonomous cars. (Note: Percentage of online conversations that concerned a topic.) 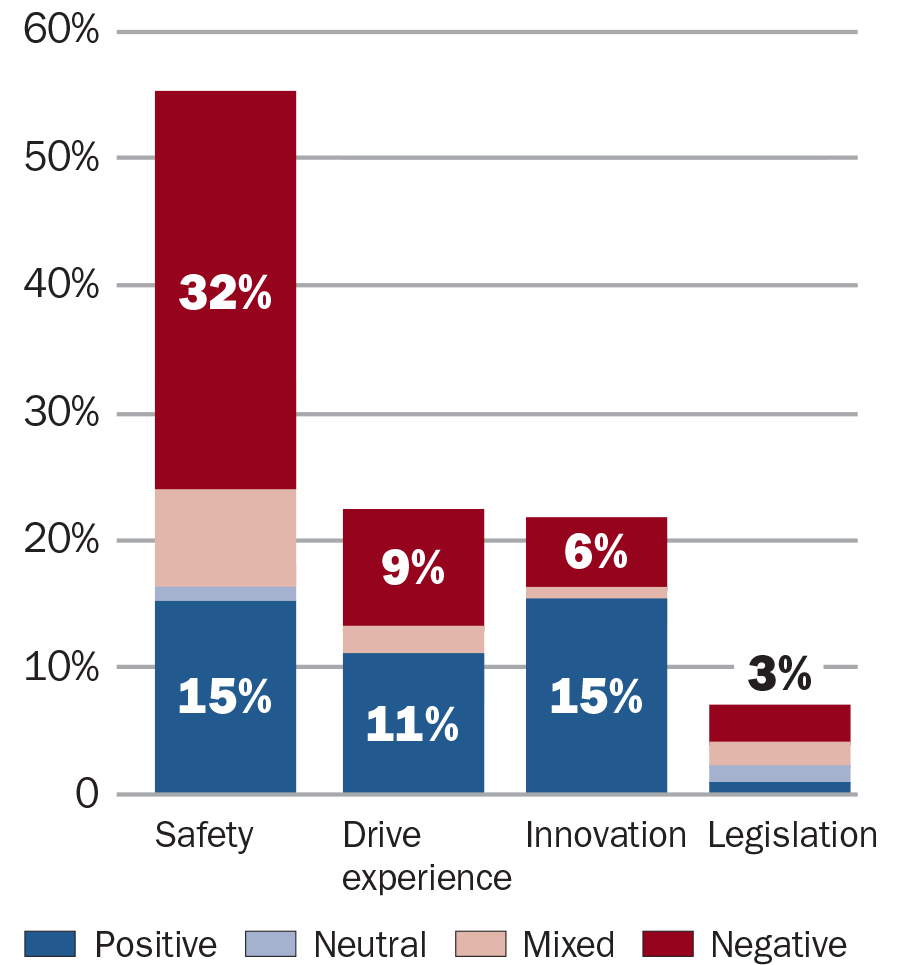 What's less predictable -- and more encouraging to developers of self-driving vehicles -- is that consumers remain optimistic that autonomous drive is the "next big thing in the auto space," according to a new study done for Automotive News.

MavenMagnet, a social data research company that combs through online discussions, noted the changing attitudes by comparing comments before and after the Tesla accident became news on July 30.

The study sifted through thousands of conversations. It analyzed U.S. consumers, trying to sort out their attitudes toward a disruptive technology with positive and negative possibilities.

"It was not a surprise that safety was a big concern and became a bigger concern," said Aditya Ghuwalewala, MavenMagnet founder. "What was more surprising was that even after the accident, there was optimism that this was the next big thing."

"It's a very engaging topic, from the look of the conversations," he said. 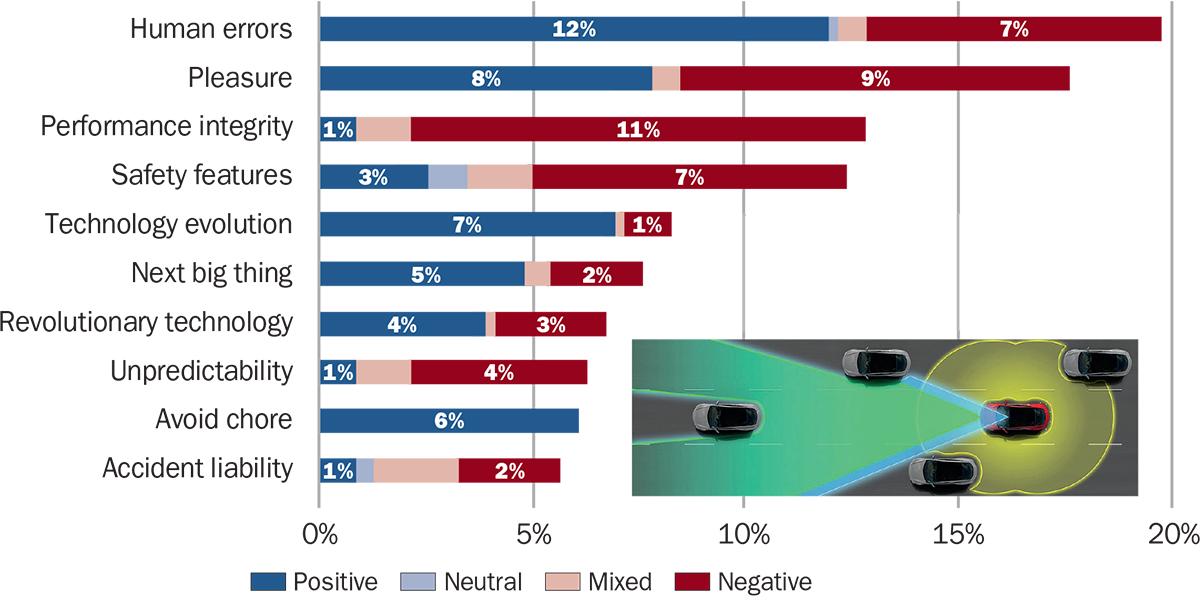 Another division was between consumers who want to keep driving themselves -- except in traffic jams -- and those who apparently can't wait until they can nap, text or watch a movie while being transported autonomously.

Cleve Langton, MavenMagnet president, said that reflects "the tedium of driving vs. the pleasure of driving: "Oh my God, I face this commute every morning, and if I could just zone out, that would be great.' And then there's the visceral satisfaction of driving."

Results from the study follow, including selected quotes from online discussions.

Positivity around drive experience is led by the flexibility of using mobile phones, watching movies and other pursuits and avoiding urban driving when they don't want to drive (like for daily commute in traffic). Negativity is driven by the love for driving. (Note: Percentage of online conversations that concerned a topic.)

A sampling of online comments about autonomous vehicles:

"I can’t imagine people being attentive enough to sit in a vehicle just waiting to intervene if the autonomous safety features fail to act, or, act improperly. Face it, its hard enough for some drivers to pay attention while driving cars without any autonomous features as it is."

"So the driver of the vehicle gets to make the decision for everyone around them to operate an auto-drive feature that’s still being BETA TESTED on public roads. That’s fine for the driver who gave consent, but it is absolutely not okay for everyone else on the road."

"Will this mean I can go to sleep and the car will get me where I need to go with out me having to pull over and go to sleep?"

Innovation is driven by the optimism of technological developments in the field and the hope of autonomous vehicles becoming the next big thing in the auto space. (Note: Percentage of online conversations that concerned a topic.)

"If it takes a self driving car to stop the stupidity we see on the roads daily, I am all for it."

"I am never going to buy a car that drives it's self, it would take away the enjoyment that driving can bring and I have never crashed into a bus either."

"And I promise not to buy a fully autonomous car — EVER! Be a driver, buy a car with a manual transmission!"

While the option of sleeping and media entertainment is driving the positivity around pleasure, quite a few car enthusiasts believe self-driving vehicles will take away the fun of driving. (Note: Percentage of online conversations that concerned a topic.)

"Driving our minivan is not an enjoyable experience. I’d much rather be sitting in the back watching Looney Toons with the kids. I’d pay $5k for that feature."

"I am keen to try one of these autonomous cars myself. Just for the sake of sampling new tech."

Concerns around performance integrity were predominantly discussed post-Tesla crash from the context of the accident that consumers attribute to the failure of sensors in detecting a road hazard. (Note: Percentage of online conversations that concerned a topic.)

"I am keen to try one of these autonomous cars myself. Just for the sake of sampling new tech."

"Driving on surface streets is an endless series of edge cases, interactions with unpredictable pedestrians and bicyclists, and poorly mapped destinations that will defeat any current self driving system."

"Can’t wait to own an autonomous car so that I can sit back and relax in Atlanta traffic."

"My 15 miles commute takes about an hour, slogging through stop and go traffic. Many folks have similar commutes. A car that would self drive through a portion of that commute would be welcome."

2023 BMW 7 Series brings down the house with ‘Theater Screen’

2023 BMW 7 Series brings down the house with ‘Theater Screen’