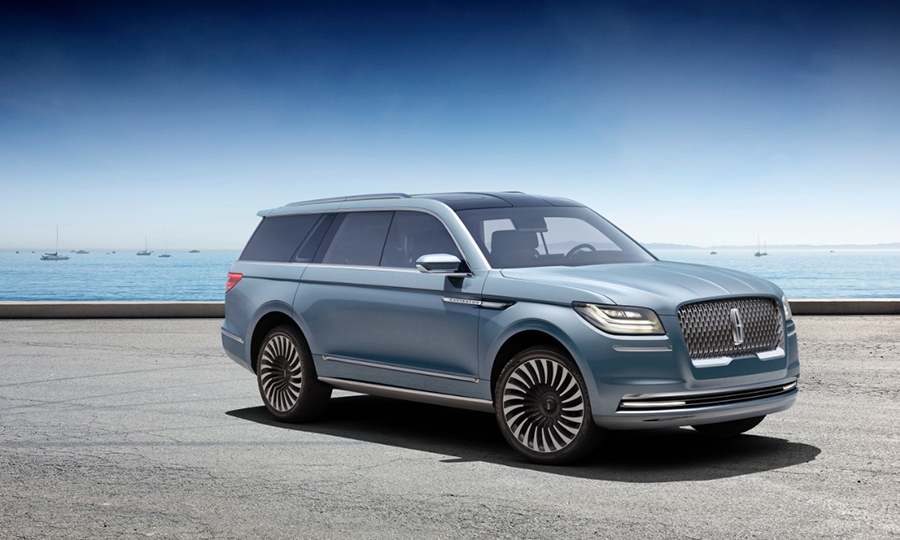 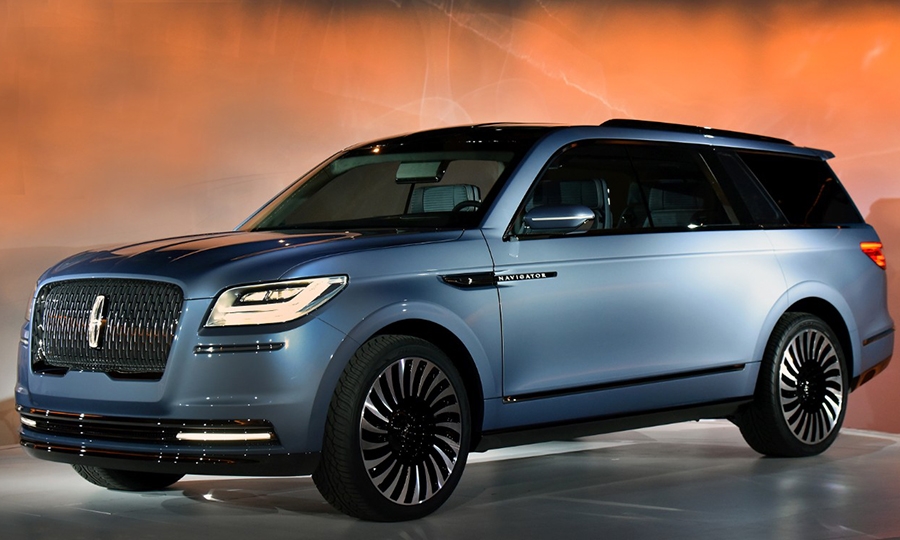 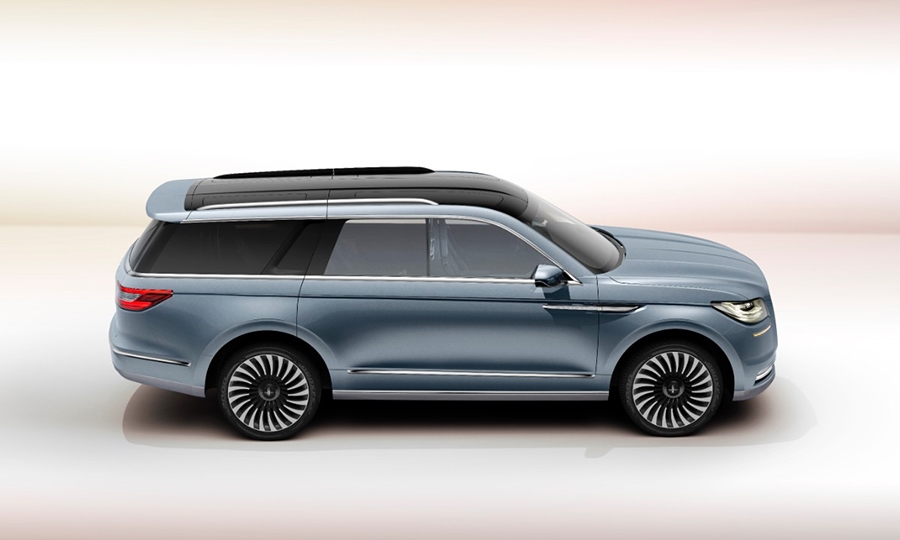 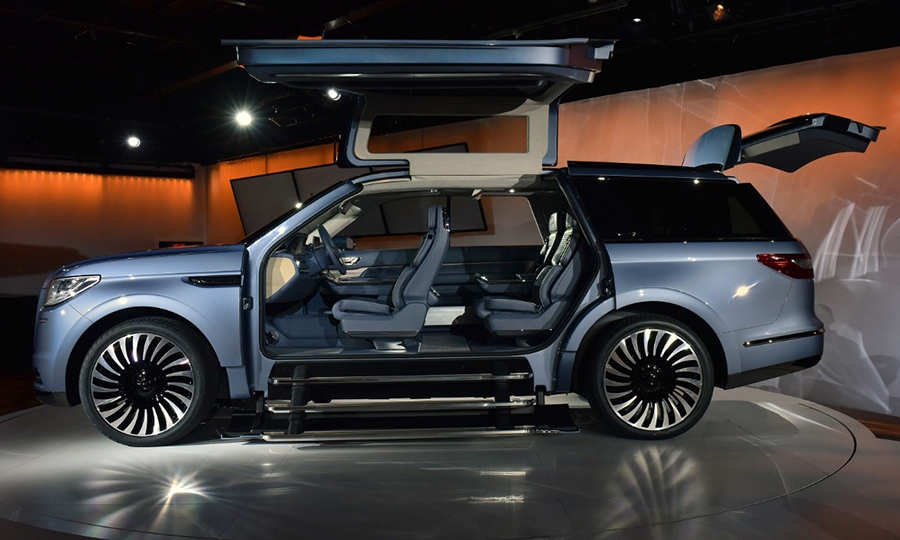 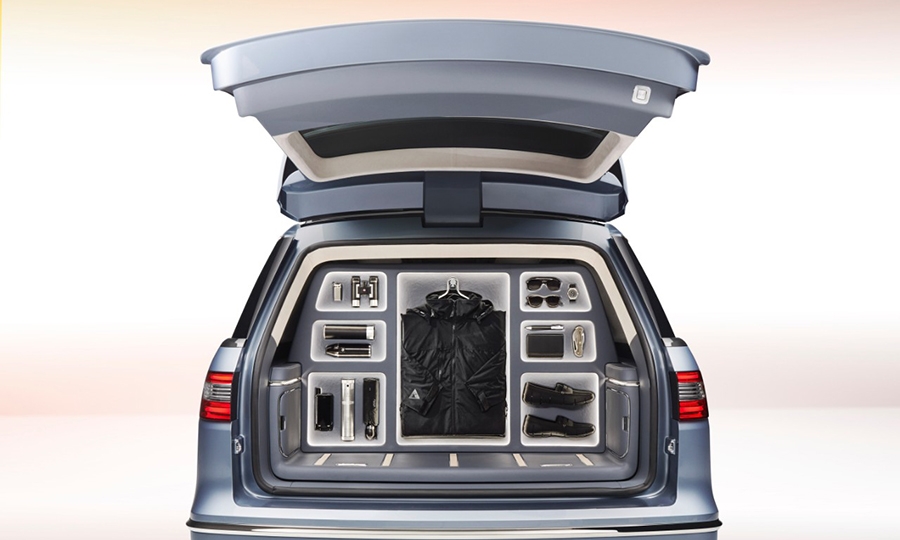 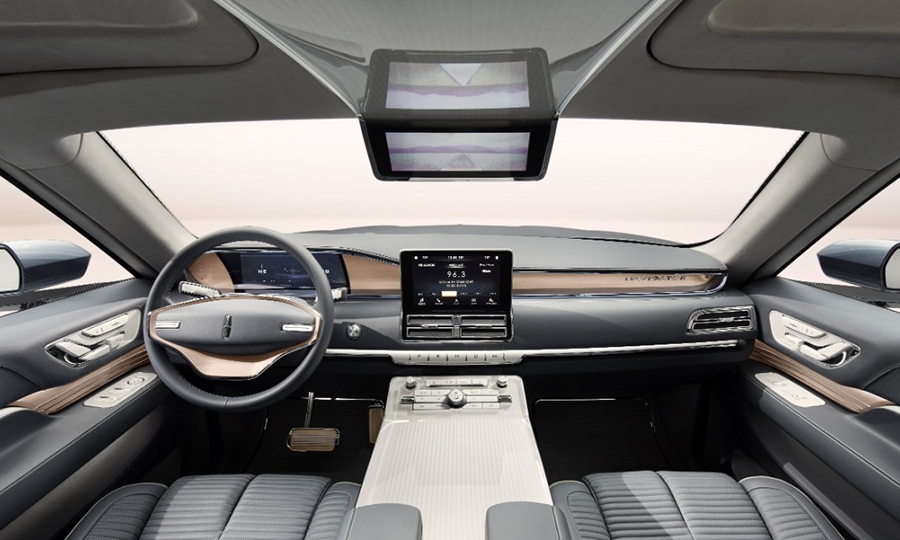 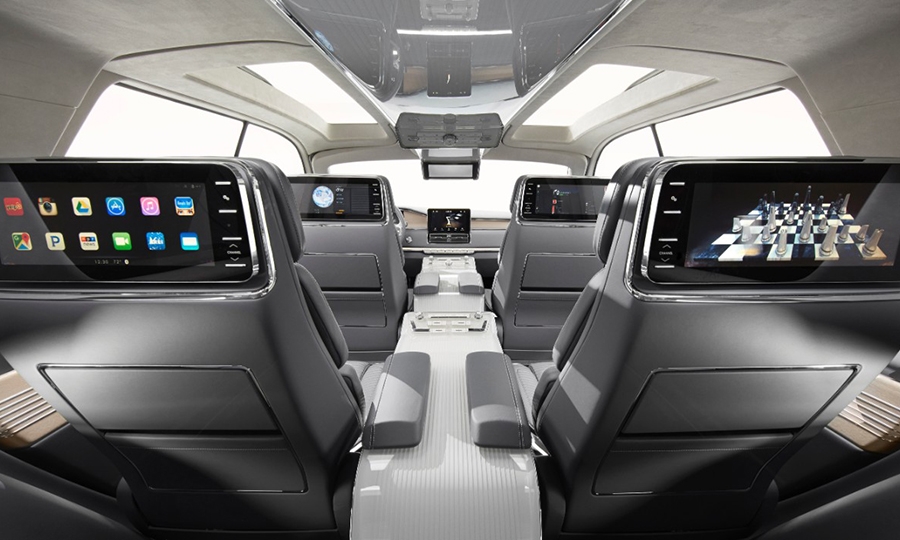 NEW YORK -- After overhauling the core of its lineup, Lincoln is remaking its biggest vehicle, the Navigator, into a more understated, serene alternative to the high-flying Cadillac Escalade.

Lincoln today unveiled a yacht-inspired Navigator concept that executives described as a “very strong” indication of the SUV that will go into production late next year. However, the 2018 Navigator won’t come with the concept’s most prominent feature: a single, upward-opening door stretching almost from wheel to wheel on each side.

“The doors won’t make it. We’re being quite clear about that,” David Woodhouse, Lincoln’s chief designer, told Automotive News. “We did it to really show off the interior.”

That interior, with three rows of wide, squared-off captain’s chairs that complement the Storm Blue exterior paint, is a vast departure from today’s Navigator.

The instrument panel has long, horizontal lines and is free of the button clutter that pervades many vehicles today. Instead, audio and climate controls are located on floating consoles between the first two rows of seats.

The shifter buttons, stacked vertically in current Lincolns, are arranged like large piano keys below a central touch screen.

“Some of our competitors’ vehicles, they’re bombarding the occupants with information,” said Andrew Kernahan, the Navigator’s chief engineer.

The Navigator concept is powered by a twin-turbo, V-6 engine that produces more than 400 hp. Specific details and additional powertrain options will be revealed with the production version, executives said.

The redesigned Navigator and its sibling, the Ford Expedition, are expected to adopt a largely aluminum body to reduce weight, increase capability and improve fuel economy. Lincoln executives wouldn't discuss what materials were used in the concept's body panels or are planned for the production version.

Under a 2015 labor deal with the UAW, production of the Navigator and Expedition will continue at Ford Motor Co.'s Kentucky truck plant in Louisville.

Even up against brash rivals such as the Escalade and Land Rover Range Rover, Lincoln is sticking to the “quiet luxury” philosophy that produced the recently redesigned MKX crossover and upcoming Continental sedan.

“Our design language is very different than Cadillac’s, inside and out,” said Lincoln’s president, Kumar Galhotra. “It’s about creating beautiful, elegant cars -- not aggressive cars.”

As Woodhouse described Lincoln’s approach: “It feels like our competitors are in the business of scaring people. It’s a very different business that we want to be in.”

Catching up to the Escalade would be a tough task for Lincoln. U.S. sales of the Escalade and Escalade ESV totaled 35,921 in 2015, triple the Navigator’s volume of 11,964.

But the concept shows that Lincoln is willing to take the risks necessary to thrive again, particularly in the SUV segments that are growing globally, said Karl Brauer, senior analyst with Kelley Blue Book.

“They need to do things like this that turn it up because this brand hasn’t been turned up in a long time,” Brauer said. “Everyone wants a big SUV across the planet, not just in the U.S.”

Galhotra said the Navigator has “very healthy margins” and is the most recognized name among Lincolns currently in production. Its customers are an average of 54 years old, the youngest of its six nameplates.

Lincoln hopes the Navigator will build on the momentum being generated by the Continental, which was introduced in concept form at last year’s New York auto show. The timing suggests a production version of the Navigator might be shown next January at the Detroit auto show, where the production Continental was unveiled this year, though Galhotra said that decision has not been made yet.

He said 30,000 consumers have said they are interested in the Continental. U.S. sales of the sedan it’s replacing, the MKS, dropped to fewer than 6,900 last year.

“No other Lincoln vehicle has generated this level of interest in that short of a timespan,” Galhotra said.