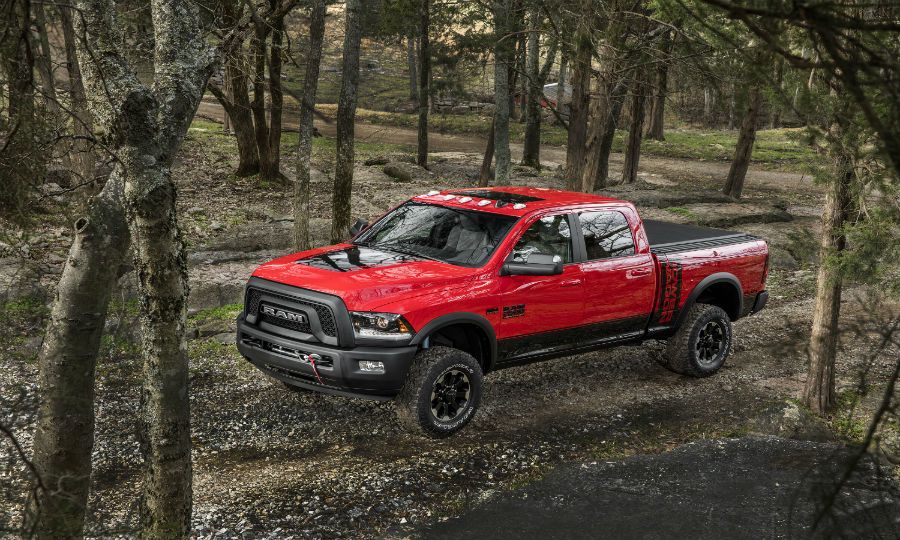 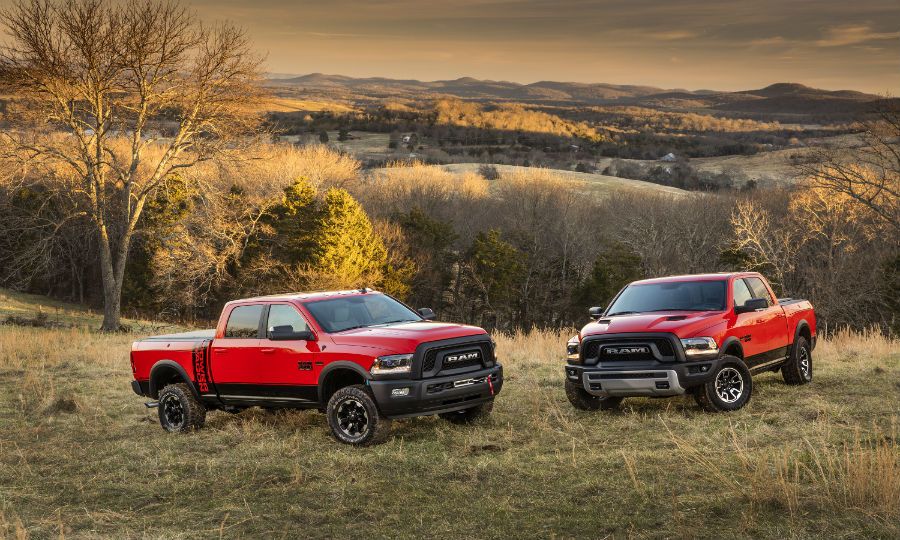 FCA
The Ram Power Wagon, on the left, shares similar design elements from the Ram Rebel, which was unveiled at last year's Chicago show.
Share 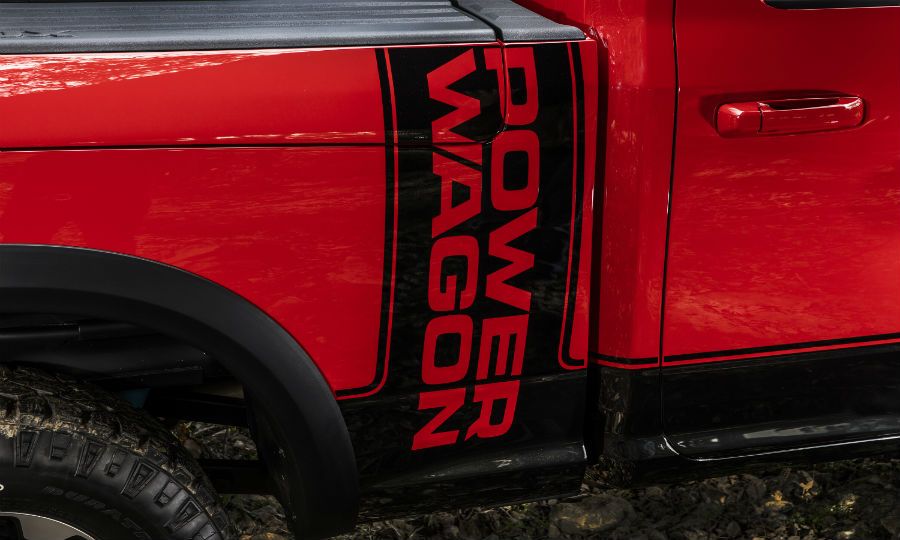 FCA
The "Power Wagon" graphic is a nod to a graphic that was found on the 1979-80 "Macho Power Wagon."
Share 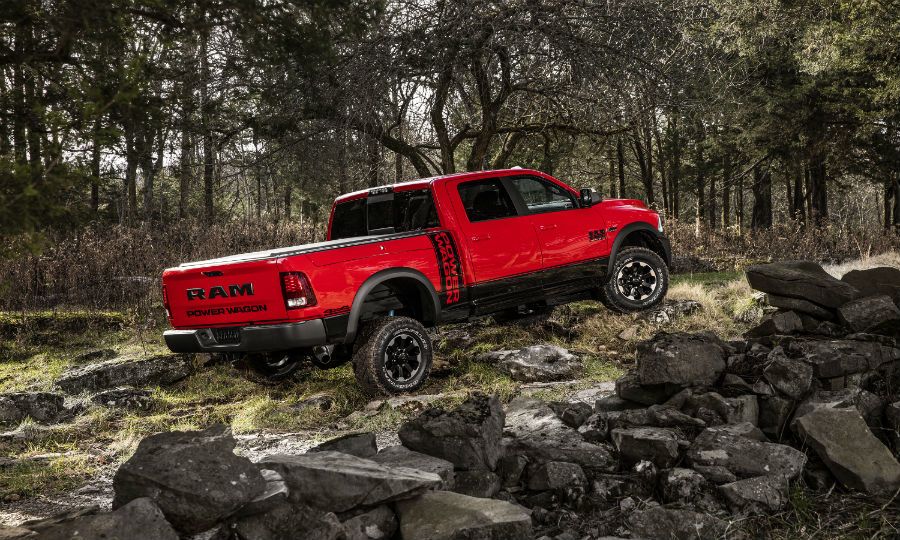 FCA
The Power Wagon is based off the Ram 2500 Heavy Duty 4x4 crew cab.
Share 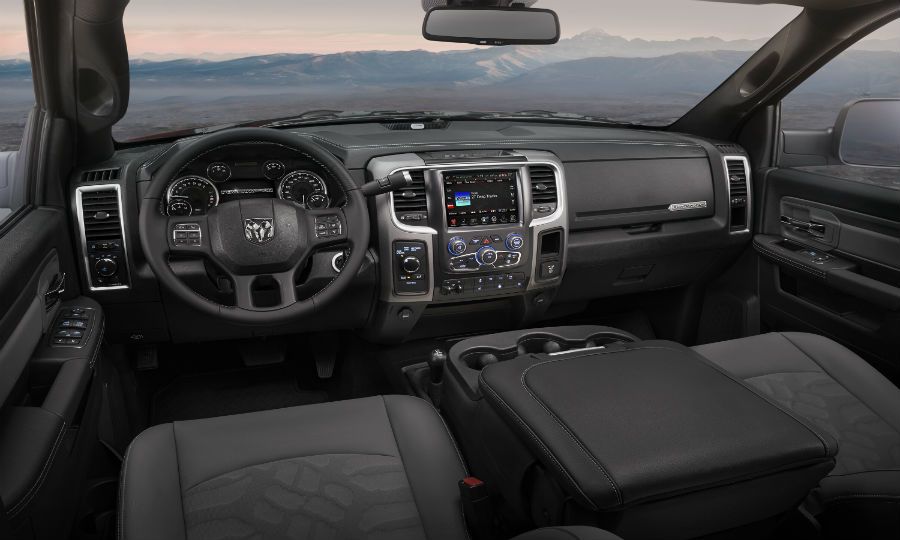 FCA
The Power Wagon is available with a interior fitted with technical grain seats and fabric inserts or the premium option which includes leather seats.
Share 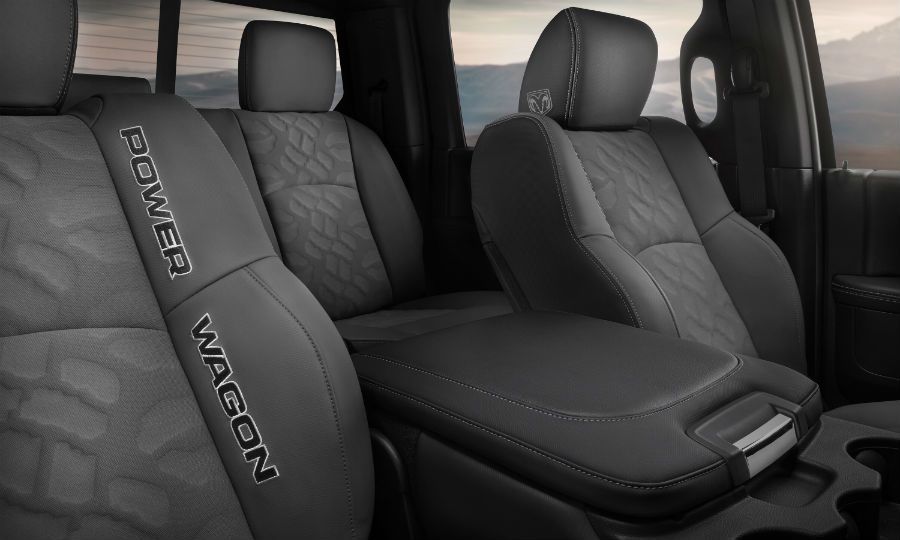 FCA
The fabric inserts in the seats are embossed with the same tire tread pattern found on the Power Wagon's tires.
Share 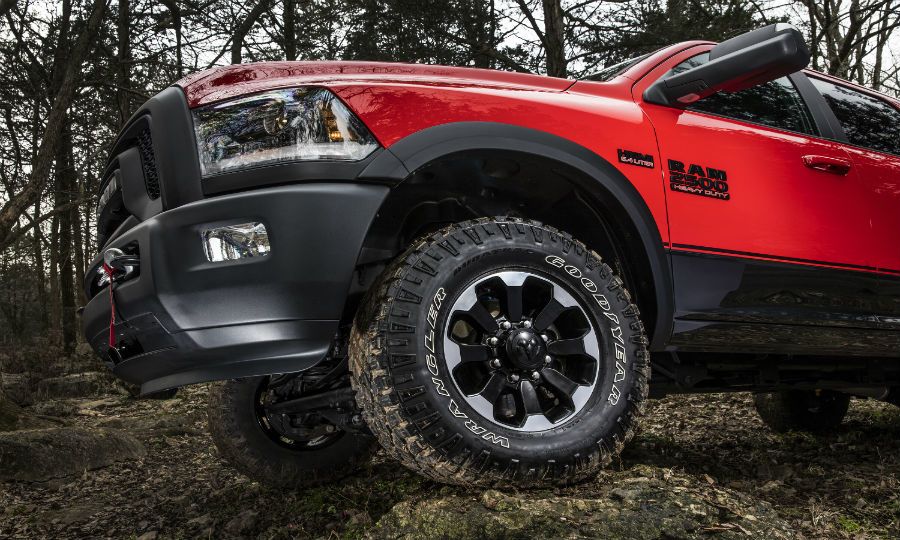 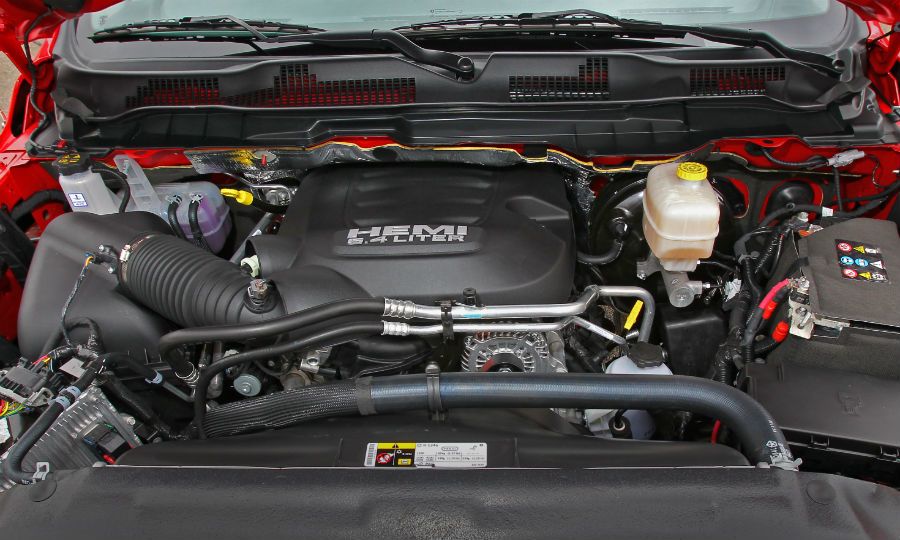 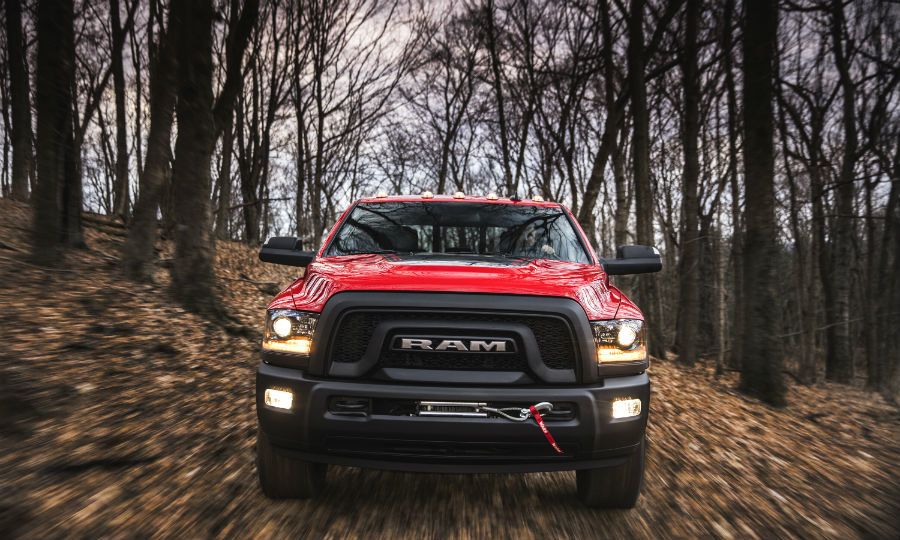 FCA
The aggressive front end also includes a standard Warn electric winch that is capable of pulling up to 12,000 pounds.
Share 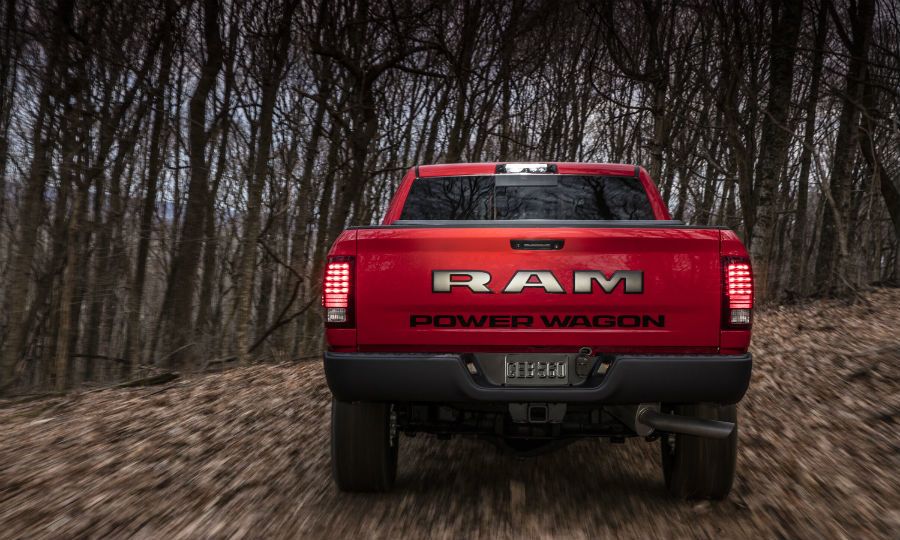 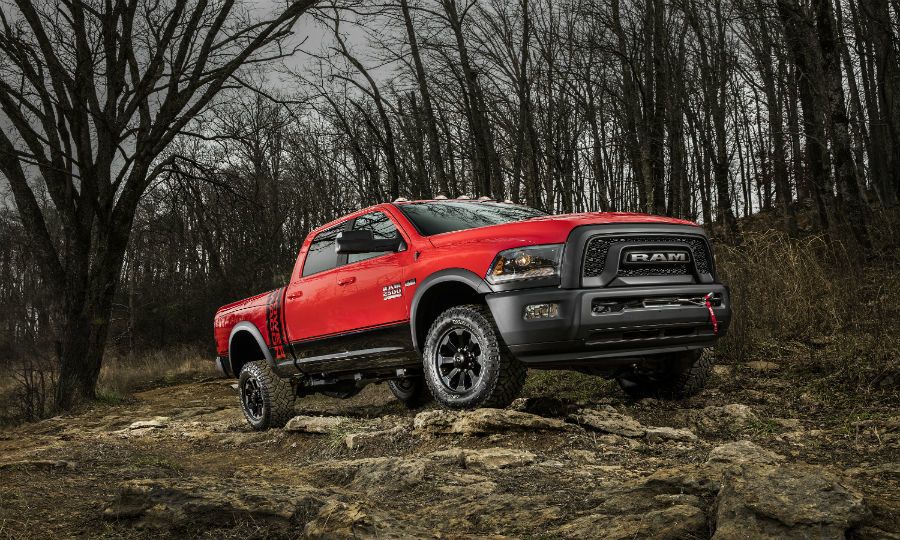 The freshened 2017 Power Wagon gets an updated grille with a new Ram logo in block letters, and new graphics on the rear quarter panels to evoke an image of the 1979 version of the off-road pickup.
Share 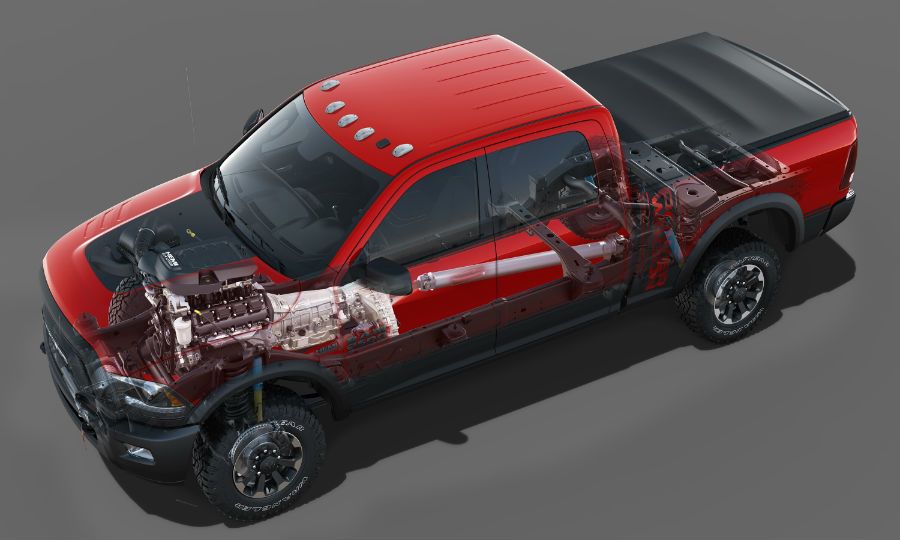 FCA
The Power Wagon, and all Ram 2500 Heavy Duty trucks, use a five-link coil rear suspension for best-in-class ride and handling, according to FCA.
Share 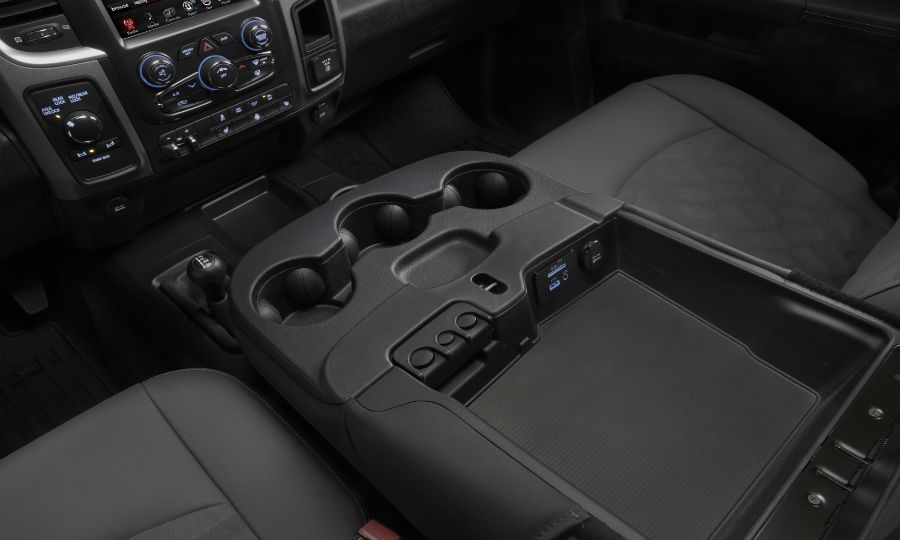 FCA
In the middle of the front seats is a "20 percent seat console armrest cover" with room for storage.
Share 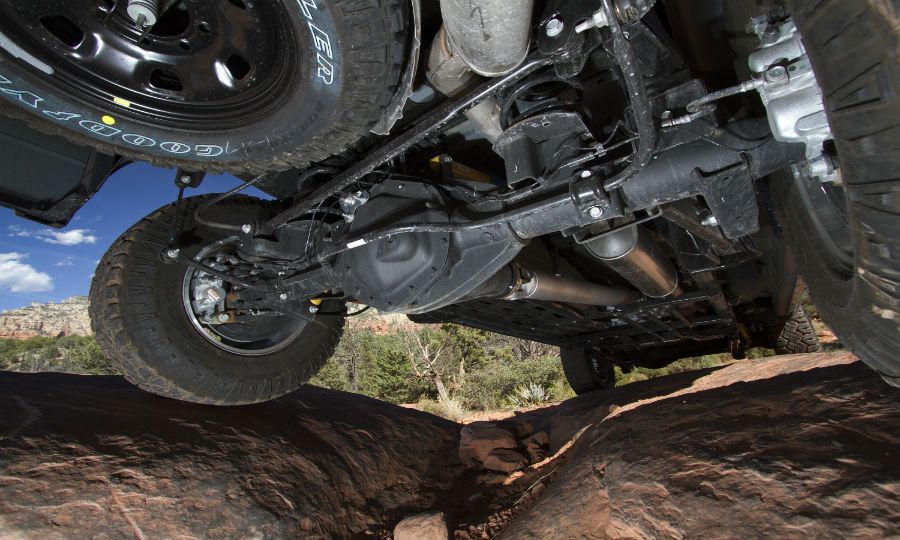 FCA
The rear suspension includes Bilstein monotube shocks and a Bilstein dampener links the top of the rear axle to the frame, which provides additional control FCA said.

CHICAGO -- Ram is updating back-country, heavy-duty offerings for 2017 with a freshened Power Wagon trim and expanded off-road packages across its three-quarter-ton pickup lineup.

The new off-road packages will be available across the Ram 2500 lineup and include a number of options to improve the pickup’s performance in rough terrain, such as hill-descent control, which allows the driver to automatically and safely descend steep terrain without using the brake. The feature had been available only on the heavy-duty’s traditional off-roader, the Power Wagon.

“We’ve had customers ask us for an off-road truck in our heavy-duty series, but we’re not going to limit it. We’re going to have it available with every single cab, with every single powertrain, in all the trims and with all the colors,” said Ram brand head Bob Hegbloom.

For the first time, the Power Wagon will have an interior that is unavailable in other Ram pickups.

The freshened Power Wagon features an updated grille that trades the current model’s chrome and crosshairs for a blacked-out version similar to that used on the Ram Rebel 1500.

Also making the leap from the Rebel 1500 is badging that trades the traditional ram’s head logo for the brand’s name in bold block lettering on the grille and tailgate. New Power Wagon graphics on the rear quarter panels complete the look and evoke an image of the off-road pickup’s 1979 version.

The Dodge Power Wagon was the first mass-produced 4x4 civilian pickup in 1945 and was a favorite workhorse for soldiers returning to the farm after World War II. It was reintroduced into the brand’s pickup lineup in 2005.

For the 2017 model, designers freshened the exterior and interior of the Power Wagon, with a new hood featuring a large gloss-black graphic.

For the first time, the Power Wagon will have an interior that is unavailable in other Ram pickups. Inside the cabin, designers picked up cues from the Rebel, including embossing the pickup’s off-road tire pattern into the seat backs. The Power Wagon will offer an optional backup camera in its tailgate, along with a second optional camera high on the center-mounted stoplight that allows the driver to monitor the pickup’s bed from its 8.4-inch infotainment display.

The Power Wagon will continue to be manufactured in Saltillo, Mexico, and the 2017 version is expected in U.S. dealerships in the fourth quarter.