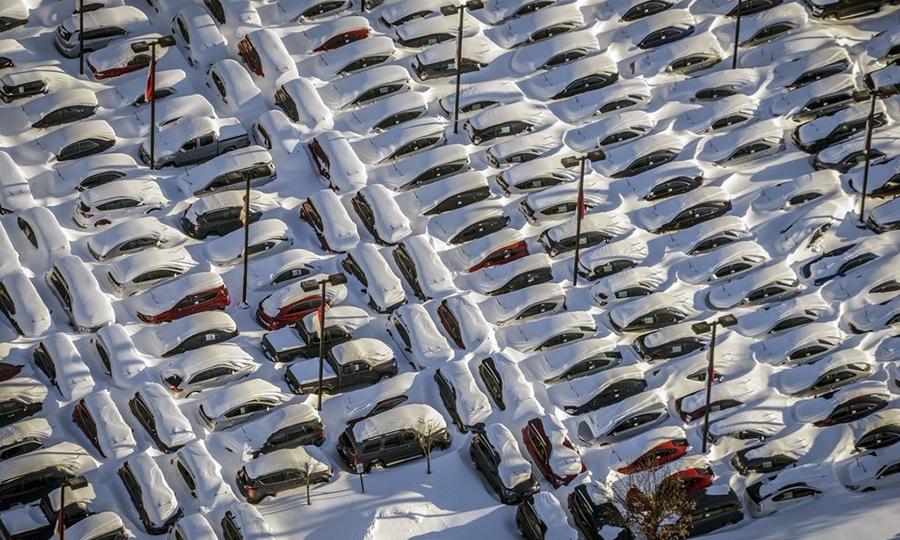 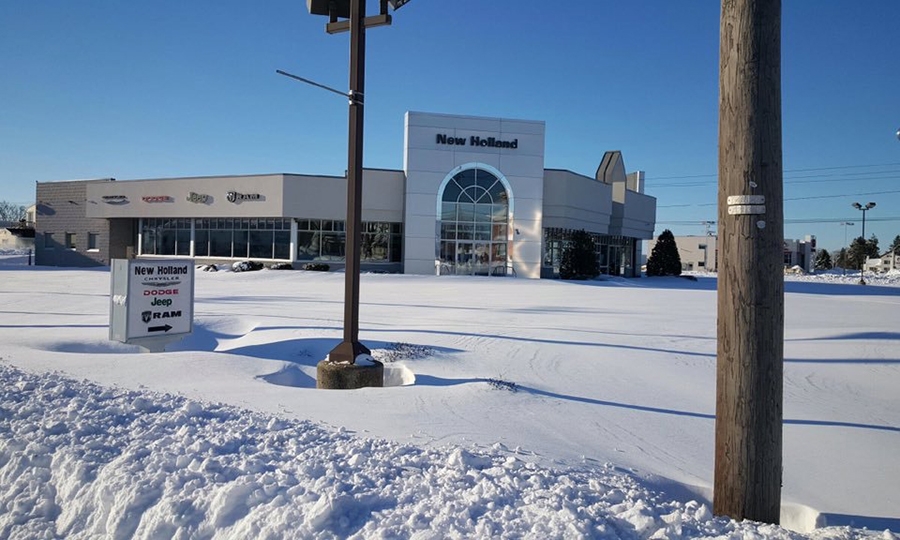 Fiat Chrysler reported its 70th consecutive monthly gain despite East Coast dealers being snowed in for a week.
Share 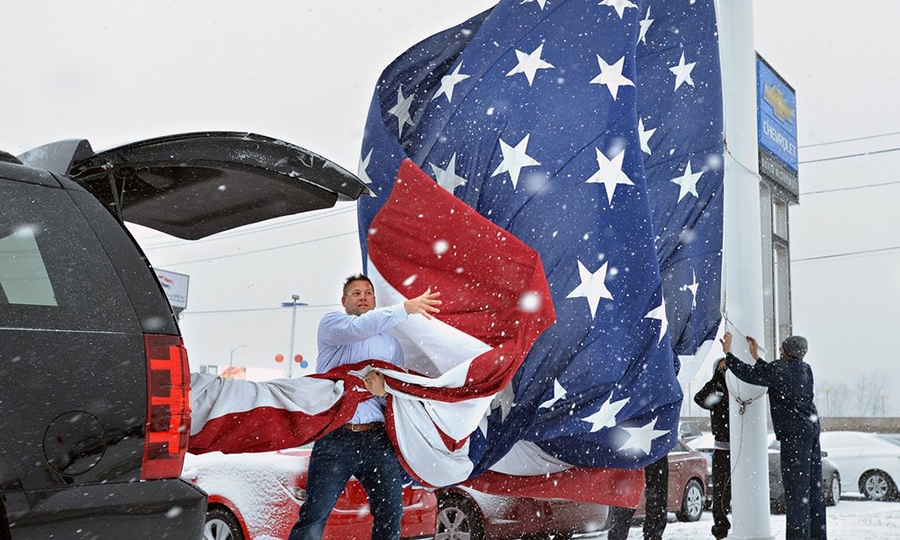 Peter Casolino/The Hartford Courant via AP
Kevin Syombathy of the McDermott Auto Group battles strong winds as he and employees take down an American flag at the dealership on Saturday, Jan. 23, 2016, in East Haven, Conn.
Share 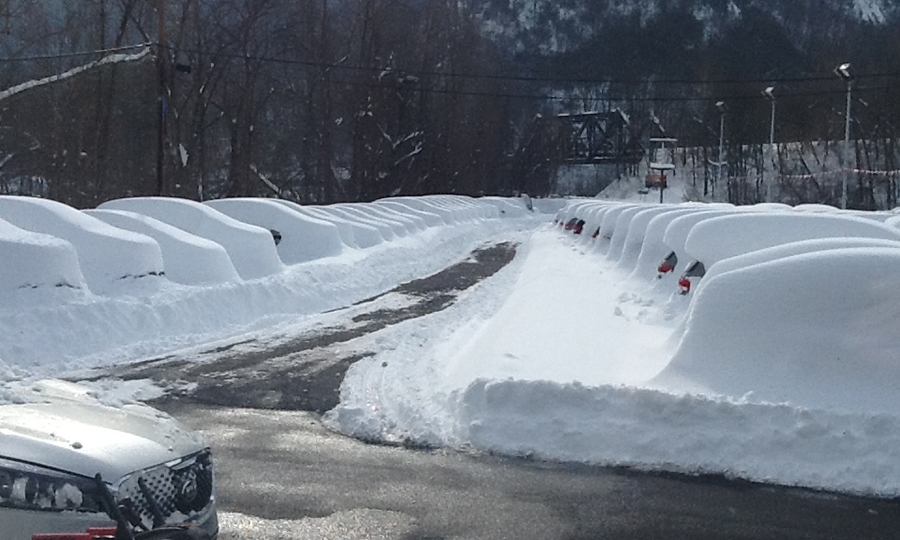 DINA WILSON
Timbrook Kia and Timbrook Buick/GMC in Cumberland, Md., received 28 inches of snow, according to the dealer.
Share 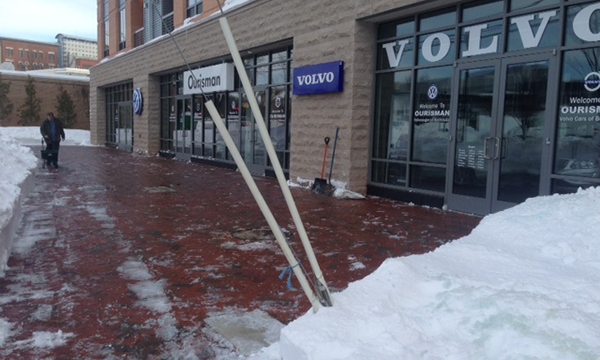 Manufacturers, dealerships and others in the auto industry find themselves digging out after the weekend’s historic snowstorm that pummeled the eastern U.S. with as much as 3 feet of snow.

Winter Storm Jonas, which the National Weather Service said produced as much as 1 to 3 feet of snow from Kentucky to New York and coastal flooding as far south as South Carolina and Arkansas, led to several manufacturing plant closures beginning Friday and slowed sales at dealerships in the affected areas.

Toyota Motor North America spokesman Aaron Fowles said roughly 200 dealerships closed throughout the region due to the snow on Saturday, in addition to other closures on Friday.

Most dealerships reopened on Sunday, but “that was mostly to clear out lots,” Fowles said.

Pordon said Penske expects to make up lost sales in the coming days and weeks as roads clear and prospective customers who delayed purchases come back to dealerships. Penske ranks No. 2 on the Automotive News list of the top 150 U.S. dealership groups.

“The bigger impact is on the service side,” Pordon said. “You just lose those hours and you can’t make them up.”

Jairo Salazar, business development manager at Metro Honda in Jersey City, N.J., said the dealership sold no vehicles on Saturday thanks to the storm, compared with the 20-25 it typically sells on a Saturday. More than 20 inches of snow fell at the dealership.

Metro is typically closed on Sunday, but he said workers showed up to help clear the lots and cars of snow, a job that continues today.

“The city hasn’t helped us, so we’re out here moving and plowing everything ourselves,” Salazar said.

He expected to make up those lost Saturday sales today, but as of early afternoon, only one sale had been made. A typical Monday results in about 10 sales.

“We were hoping to make it all up today,” Salazar said. “It hasn’t happened. We have two customers in right now, and we just sold our first car.”

In response, Salazar said he’s sending an email blast out to customers offering $500 off a new vehicle purchase and highlighting vehicles with four-wheel drive that can more easily navigate wintry weather.

Creative marketing was also required in Maryland, where more than 2 feet of snow was dumped on Ourisman Volkswagen in Bethesda. Ourisman Director of Marketing Neil Kopit also hopes to make up lost weekend sales throughout the week as the roads clear. He expects to see sales of larger vehicles spike.

“We live day-to-day in this industry, but we don’t anticipate losing out” on sales long-term, Kopit said.

Kopit said he had his employees reach out to customers via email during the snowstorm to connect and get them to think about buying a new car when the storm was through.

“People are going to be stuck at home, so this is a chance to reach out and build a connection,” Kopit said.

Bethesda and the rest of the Washington, D.C., region were hammered with snow over the weekend, paralyzing the nation’s capital.

The Washington Auto Show, which was called off over the weekend, was closed to the public again today.

Auto show producer John O’Donnell said the show was forced to close for another day after the Walter E. Washington Convention Center informed the show on Sunday night that its doors would be closed again today.

“When there’s no decision to make, it’s an easy decision,” O’Donnell said.

Washington was hit with at least 22 inches of snow, according to the Weather Service, and Mayor Muriel Bowser declared a state of emergency.

Bowser urged residents to stay off the streets while crews cleared snow from secondary roadways, parking lanes and highway shoulders.

The nation’s capital was at a standstill after federal government offices were ordered shut today. Schools in the district and suburbs also were closed, and the U.S. House of Representatives canceled all votes until next week.

O’Donnell, who also serves as president of the Washington Area New Automobile Dealers Association, said that although conditions have improved on the city’s major highways and roads, work remains to be done elsewhere. He said he’s optimistic that the show will open to the public Tuesday.

O’Donnell is anticipating large attendance this weekend and said the show has been in touch with fire marshals to discuss how to safely get as many people in and out of the convention hall as possible.

O’Donnell said he has not spoken with the convention hall to extend the auto show’s dates beyond Sunday, when it is scheduled to close, and said he doesn’t expect to get permission to -- noting how in-demand the convention center typically is.

“But you never know unless you ask,” he said.

Automakers including General Motors, Toyota and BMW temporarily idled some of their production facilities over the weekend because of the storm.

“The safety of our associates is our top priority, and snow and ice throughout the region made the road conditions unsafe for our associates,” Foster said.

The facility began running on a normal schedule Saturday night. Foster said lost production will be made up, but it has not been decided whether that will be through overtime or ramped-up production.

A spokeswoman for Volvo, which has a facility in Ridgeville, S.C., said production was not impacted by the storm and did not anticipate any major problems with sales.

Toyota idled its Georgetown, Ky., plant on Friday, which produces the Camry, Avalon and Lexus ES 350.

GM on Friday and over the weekend shut down its Bowling Green, Ky., and Spring Hill, Tenn., assembly plants and its Baltimore powertrain facility. The Bowling Green plant produces the Chevrolet Chorvette Stingray, while the Spring Hill facility makes the Chevy Equinox and Cadillac XT5.

Spokesman Tom Wickham said GM expects to make up lost production, but did not disclose how many vehicles or parts were lost. The plants have since reopened.

GM spokesman Dan Flores said there is “no way to quantify” how many sales were potentially lost at dealerships, but he does not anticipate a major impact on the company’s sales figures.

“From a sales standpoint, we don’t see any sort of long-term impact from this,” Flores said.

Communities along the East Coast were struggling to return to normal today following the blizzard.

At least 30 people have died from storm-related causes including traffic accidents and heart attacks while shoveling, with deaths reported in states stretching from Arkansas to New York, according to officials and media reports.

The blizzard was the second-biggest snowstorm in New York City history, with 26.8 inches measured in Central Park by midnight on Saturday, shy of the record 26.9 inches set in 2006, the Weather Service said.

The Weather Service said the deepest regional total was 42 inches in Glengary, W.Va., in the state’s far eastern panhandle.

Coastal flooding was reported up and down the mid-Atlantic and Northeast coastline, according to the Weather Service. The storm also caused high freezing-rain precipitation in Southern states including South Carolina, where a half-inch of freezing rain fell near Fort Mill, south of Charlotte, N.C.