U.S. auto industry has evolved from original goals of 2009 bailout 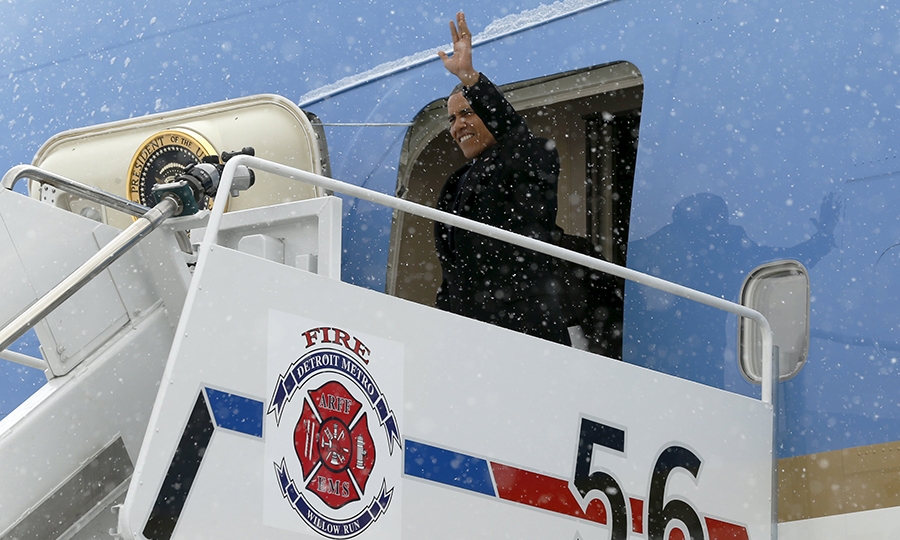 REUTERS
Obama touches down in Detroit on Jan. 20.
Share 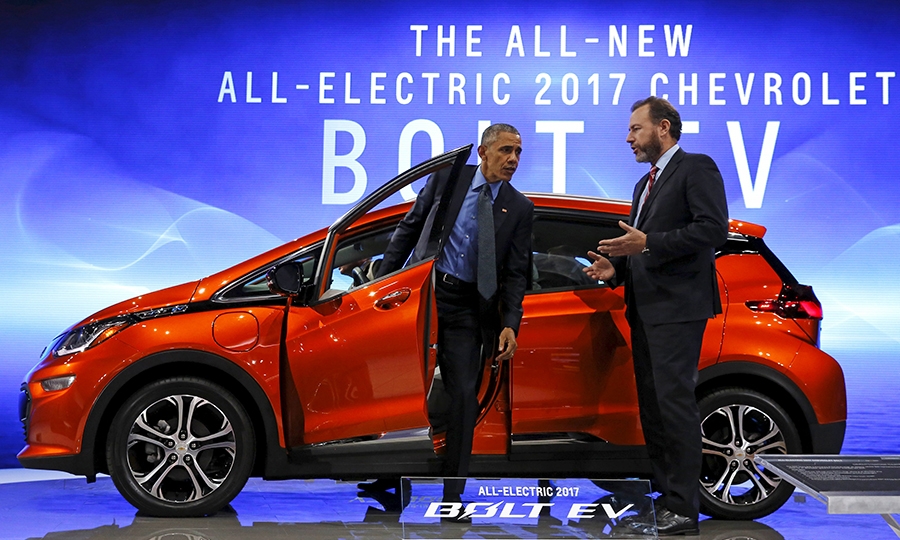 REUTERS
President Obama viewed the Detroit auto show last Wednesday during one of the public days. A total of 815,575 people attended.
Share 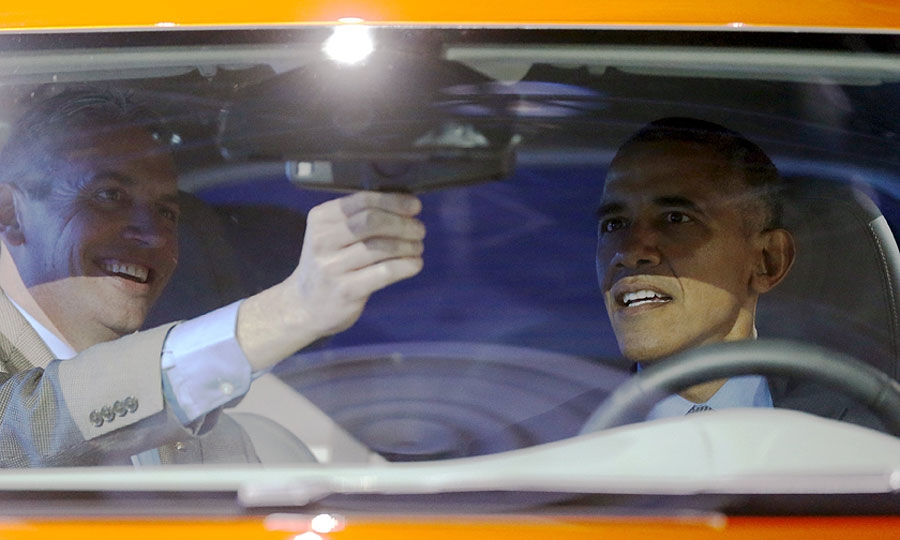 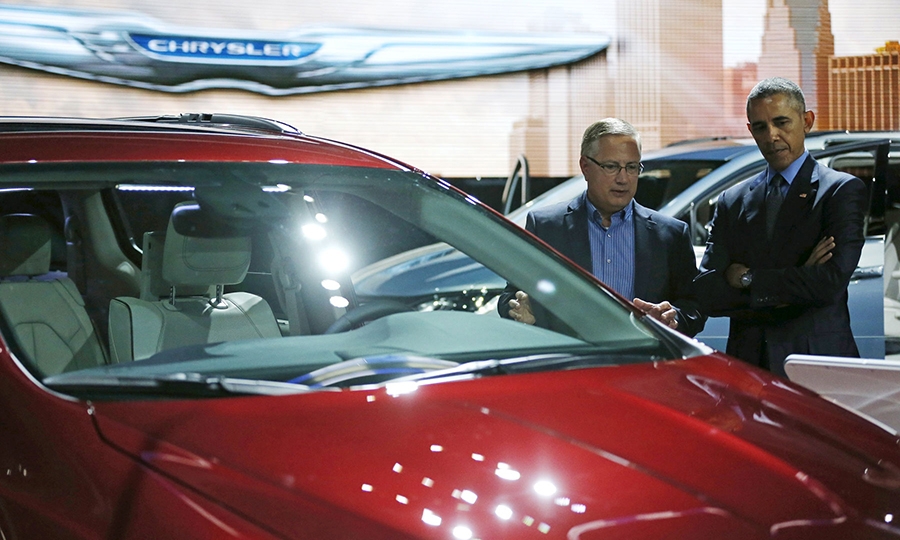 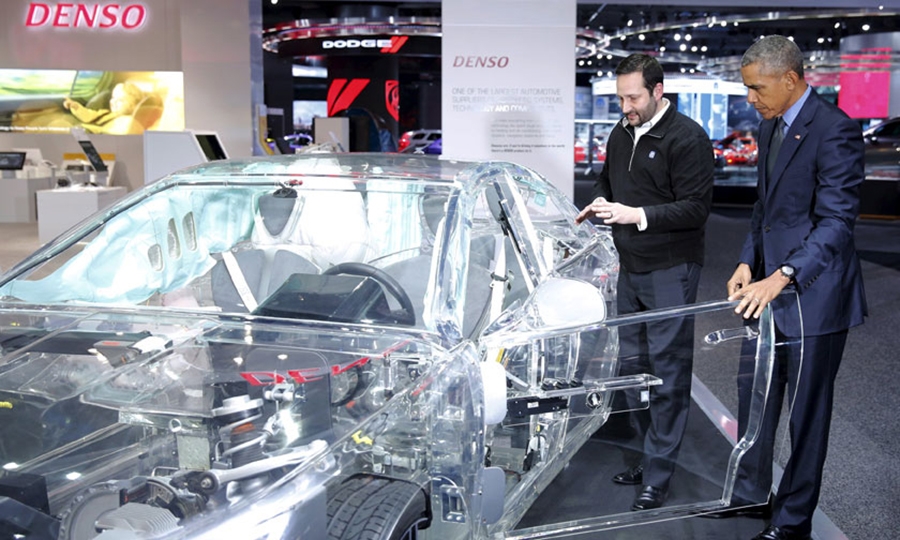 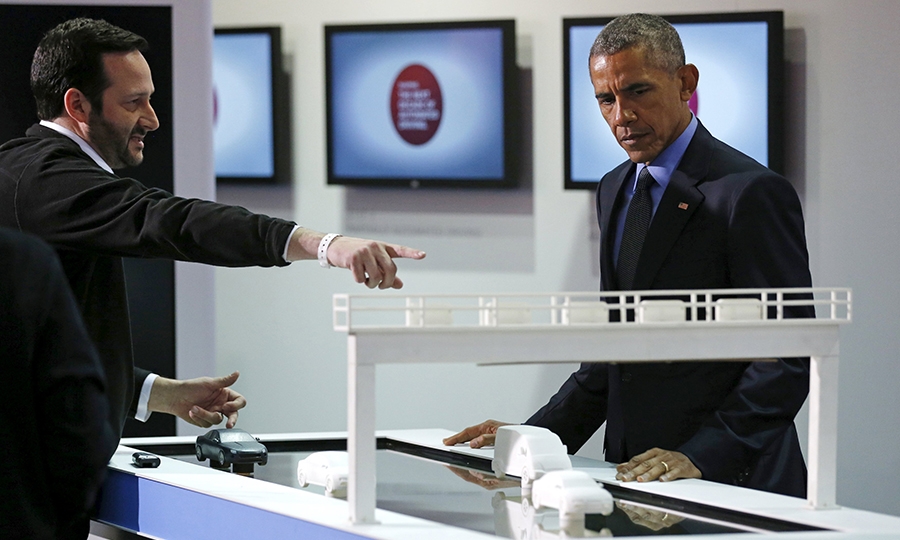 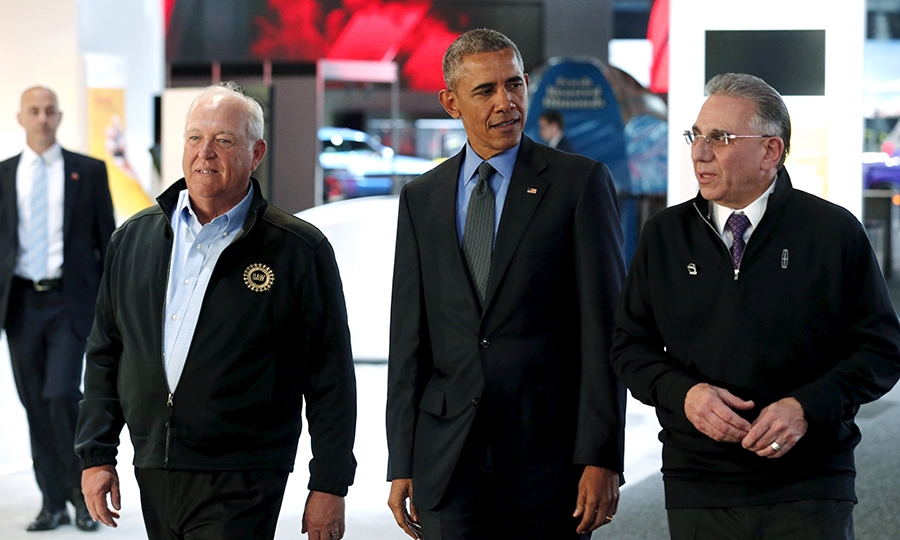 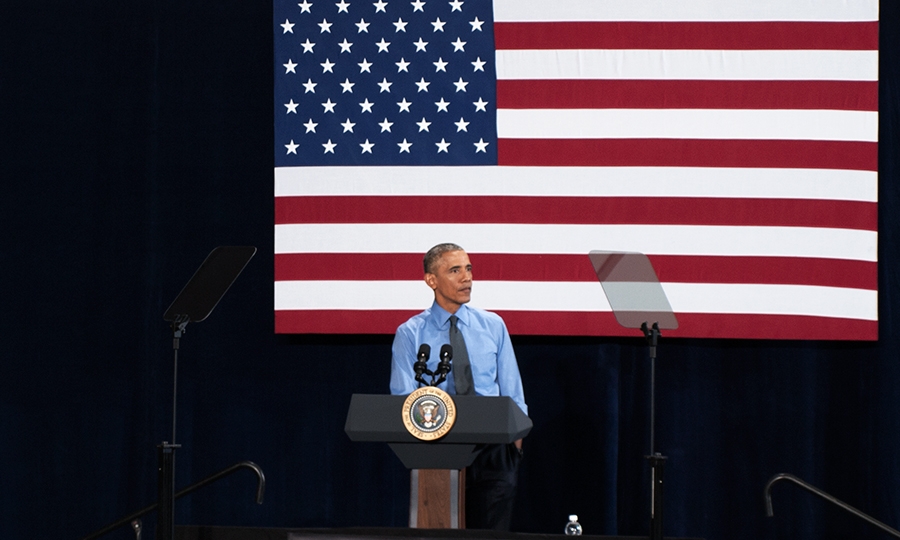 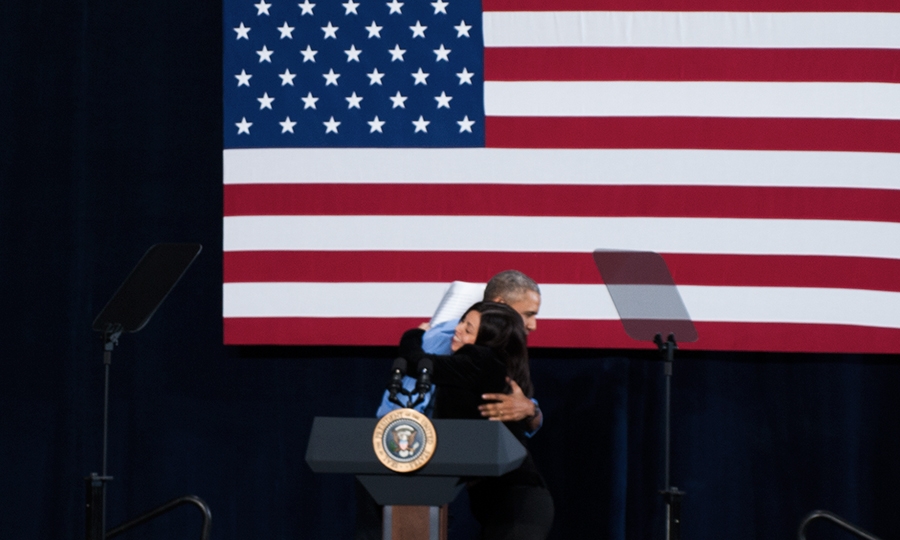 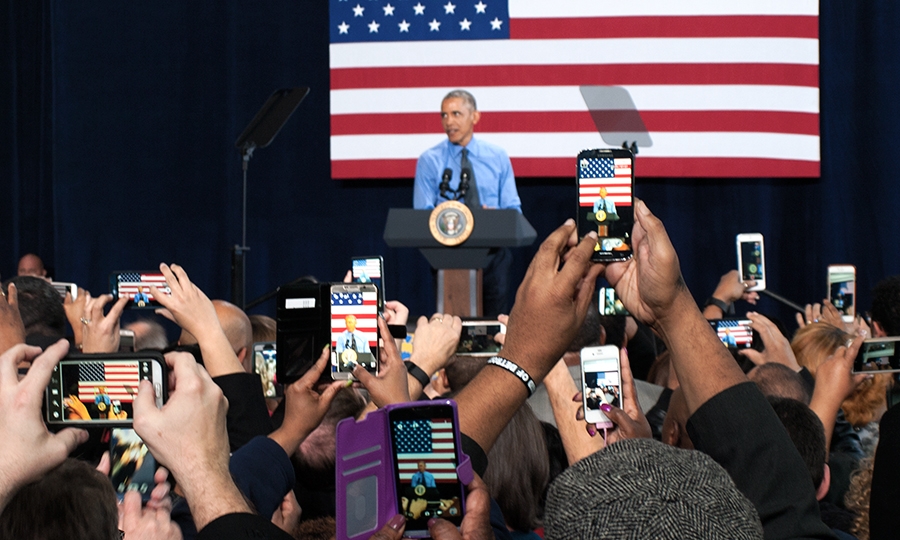 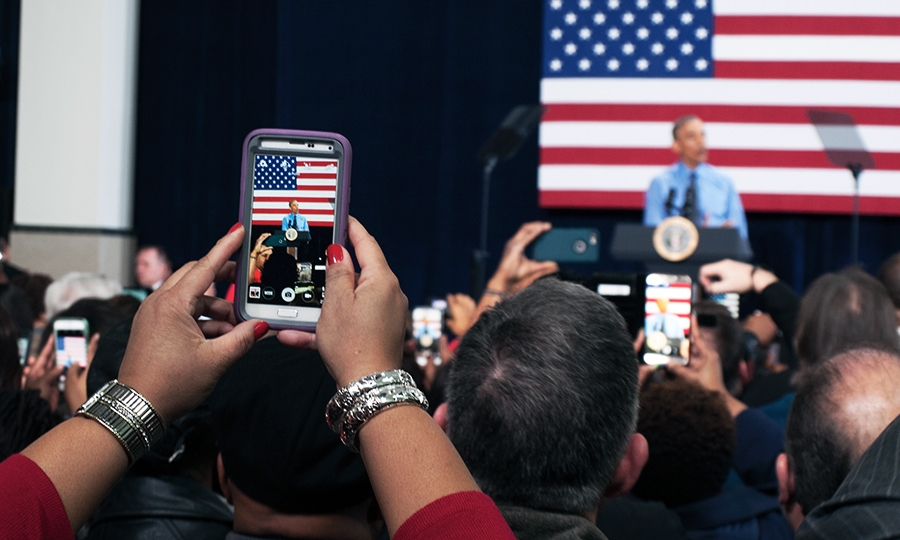 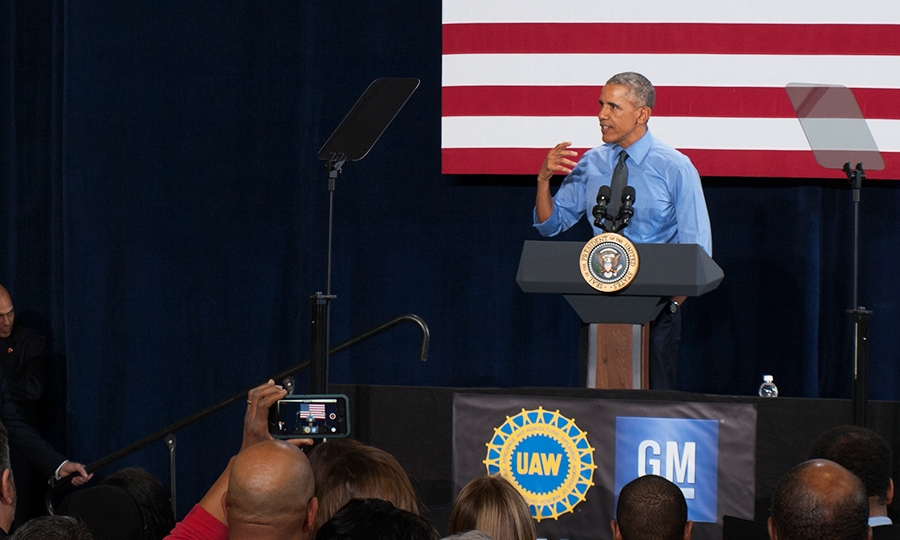 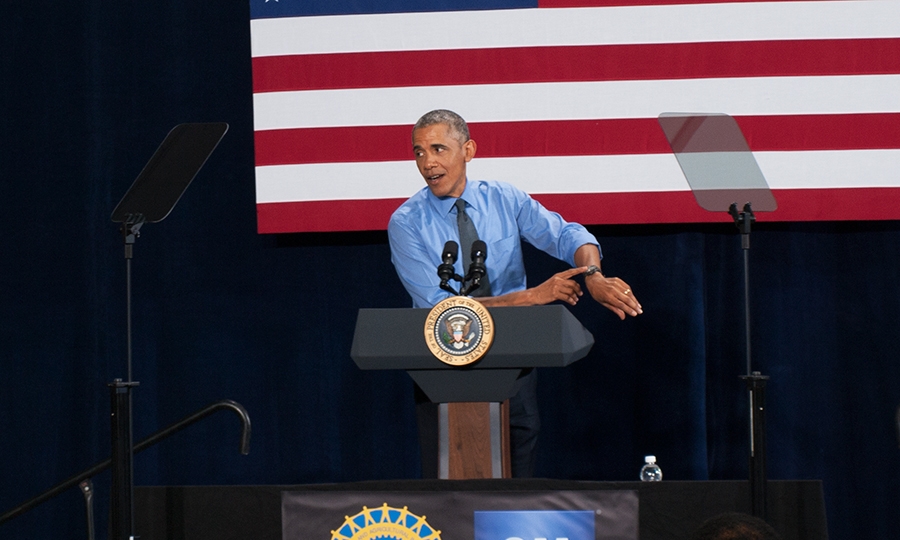 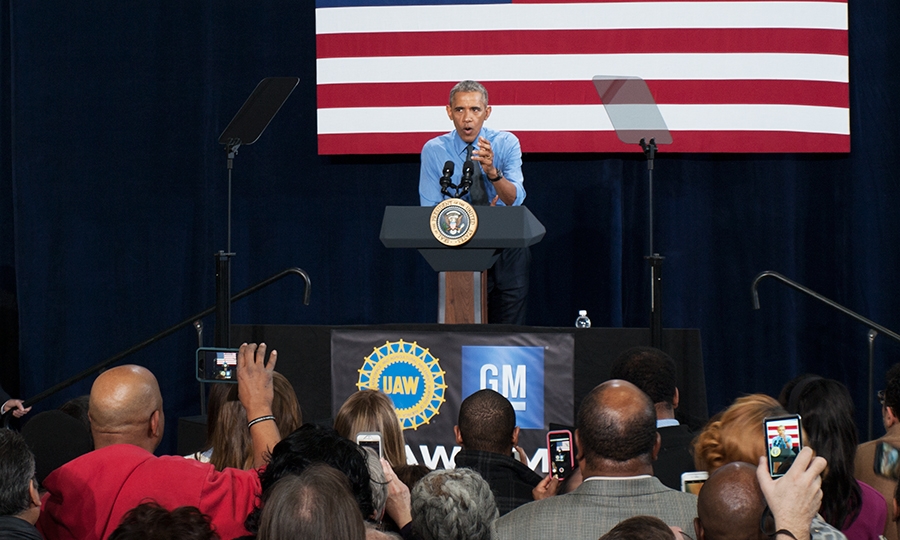 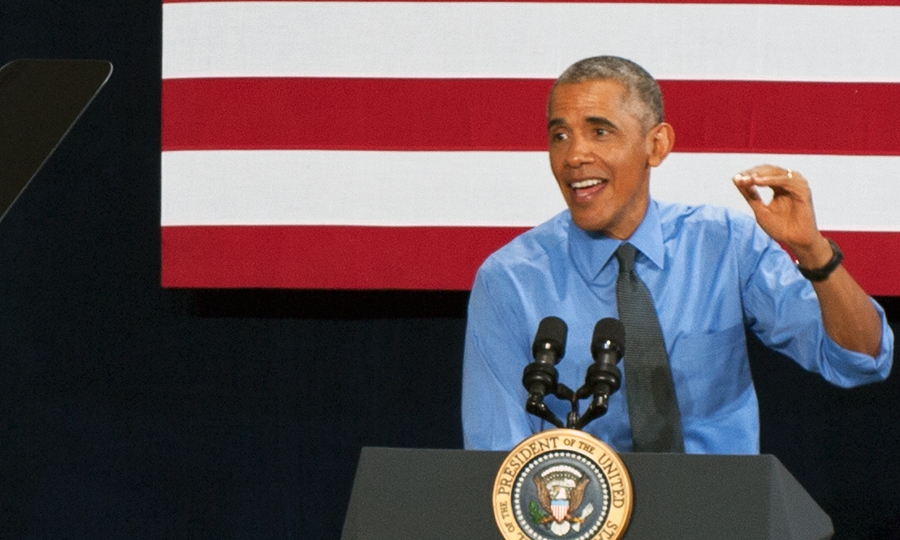 DETROIT -- President Barack Obama’s time with a fortified Cadillac limo, he calls it "the beast," is winding down, so he admittedly did a little browsing Wednesday for a new vehicle at the Detroit auto show.

Following his visit to the show floor, he was peppered with suggestions during a speech at the UAW-GM Center for Human Resources near downtown Detroit. One onlooker shouted Ford while another said Cadillac.

But one proposal from the crowd, a Jeep Grand Cherokee, struck a chord and caused Obama to take a stroll down memory lane.

“I will say the Cherokee was the first new car I ever bought. I didn’t get a new car until I was like 32. I always had an old, beat up hoopty,” Obama said. “ … I thought I was a bad man once I was in that car. I was up all high looking at the road.”

Obama, who presided over the U.S. auto industry’s restructuring after initial bailout funds were provided to GM and Chrysler by the George W. Bush administration, recounted the harrowing times the industry faced back in 2008.

He said GM and Chrysler wouldn’t be around today without the government’s intervention, while a devastated supply chain could’ve taken down Ford as well.

“More than 1 million Americans would’ve lost their jobs at the worst possible time. Not just auto workers, but the people in communities who depend on you,” Obama said. “The teachers who teach your kids, the small business owners who know your name. Their livelihoods would’ve been at stake as well, so we decided we couldn’t let that happen.”

Since then, Obama said the auto industry has added more than 640,000 new jobs.

“In exchange for help, we demanded responsibility. We said the auto industry would have to truly change, not just pretend it was changing,” Obama said. “The industry retooled, it restructured. Management and labor got together to settle your differences. Everybody put some skin in the game, everybody sacrificed for the sake and survival of this industry.”

Obama has made several trips to Detroit and Michigan during his two terms to monitor the bailout and celebrate its overall success.

During the stop at the Detroit auto show, Obama sought to give a push to electric vehicles. He sat in the driver's seat of a 2017 Chevrolet Bolt EV, an all-electric car that GM says will have an estimated range of 200 miles on a single charge. The president declared it a nice-looking car.

The White House noted the auto industry was on track to meet targets to double fuel efficiency and cut emissions by half by 2025.

"So vehicle manufacturers are beating their standards for the third year in a row now," White House spokesman Eric Schultz told reporters on Air Force One on the way to Michigan.

On the show floor

Obama arrived on the Detroit show’s “education day,” when schoolchildren arrive in buses to learn about the importance of the industry to the region. It was the first visit to the car show by a president since Bill Clinton in 1999.

At the Chrysler booth, Obama learned about technology that may lead to autonomous vehicles, and a Chrysler representative touted the new Pacifica minivan -- bigger than the previous model, but more aerodynamic.

The president dug out a movie reference for reporters following him at the show. “You guys remember ‘Get Shorty,’ right? It’s cool driving a minivan,” Obama said.

Obama’s visit to the Ford booth was closed to reporters, unlike his other stops. Ford opposes the 12-nation Trans-Pacific Partnership, a trade deal that is one of Obama’s top legislative priorities this year. Ford has complained that the deal doesn’t include stronger curbs on currency manipulation by U.S. trading partners and has lobbied against it.

Despite record 2015 sales, the auto industry faces a challenge on the horizon as fewer young people buy cars or even get drivers’ licenses. According to a University of Michigan study released Tuesday, in 2014 77 percent of people ages 20 to 24 in the U.S. had drivers’ licenses, compared with 92 percent in 1983.

Reuters and Bloomberg contributed to this report.