Ghosts of Rodney Dangerfield: The Lexus LC 500 and what people think 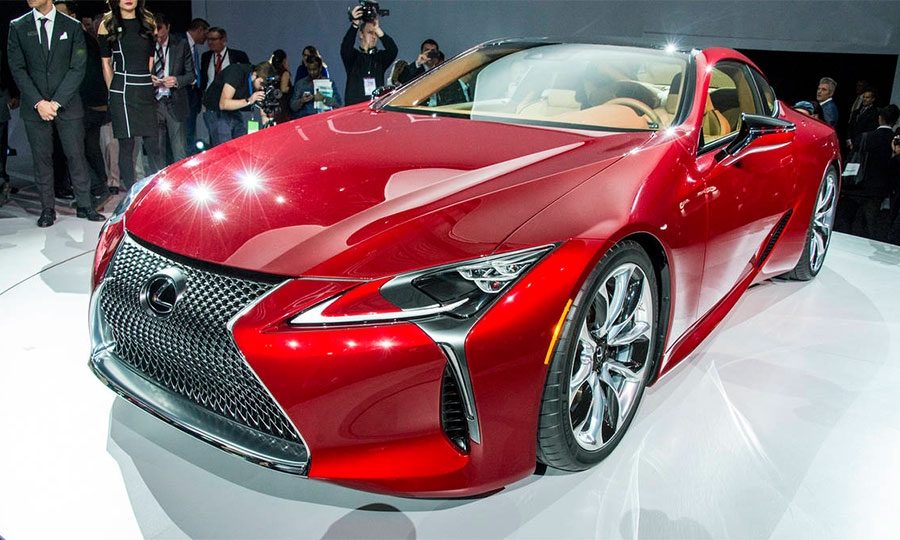 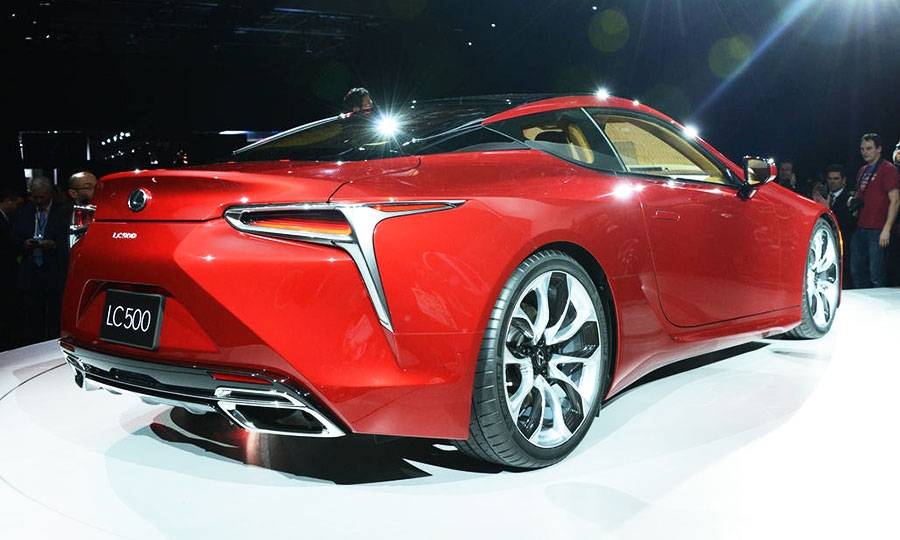 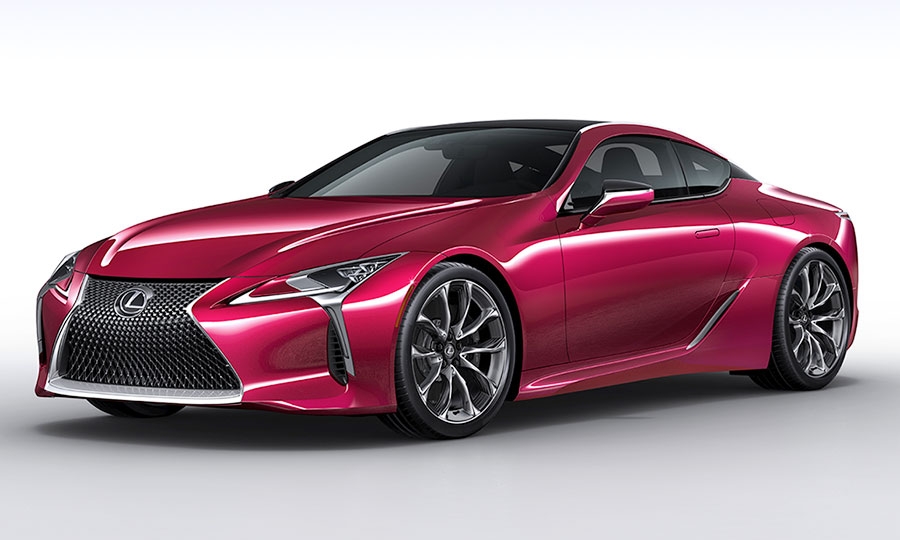 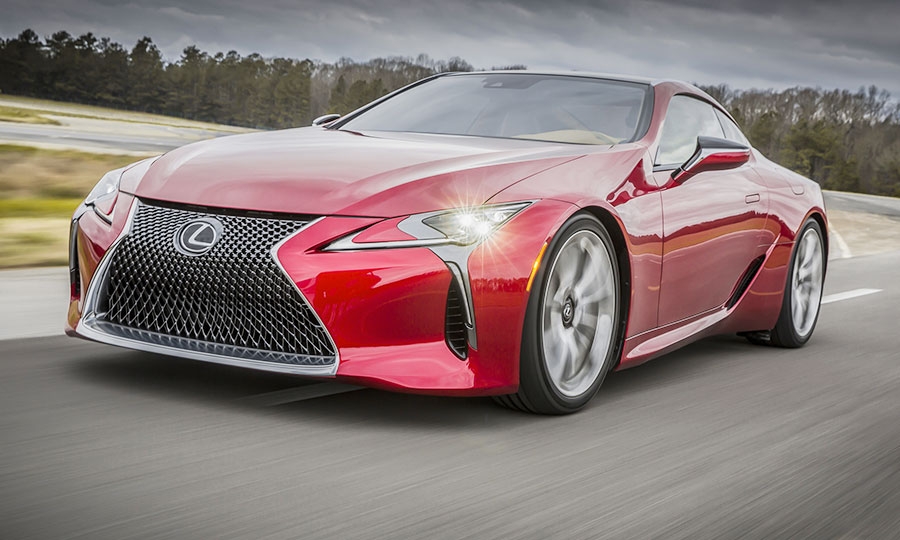 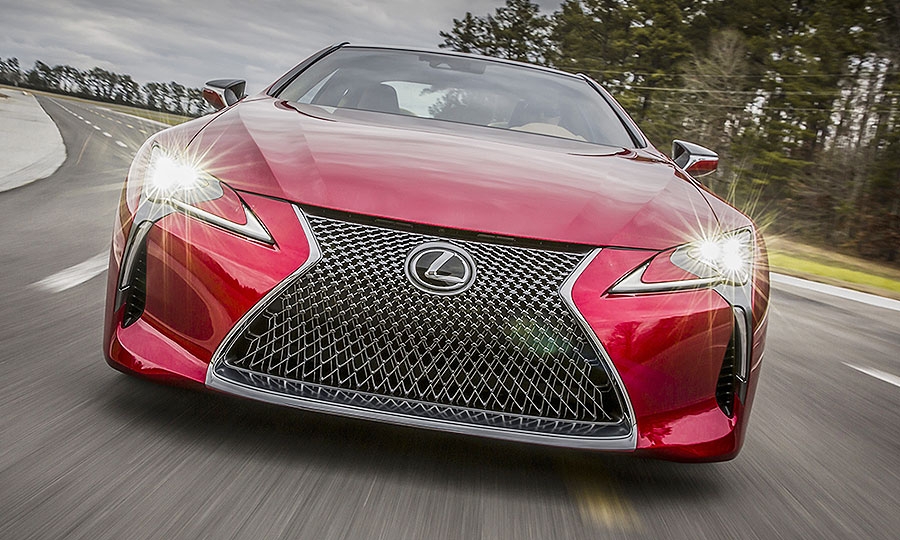 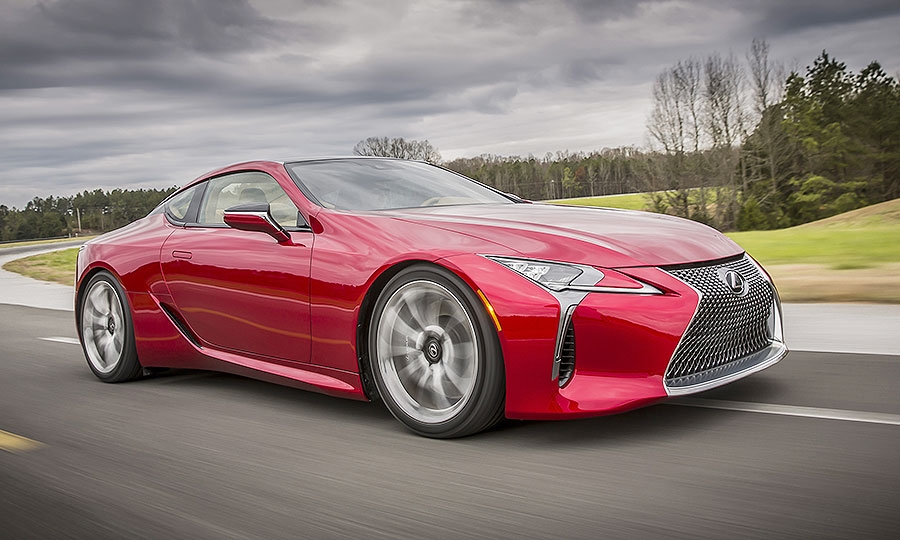 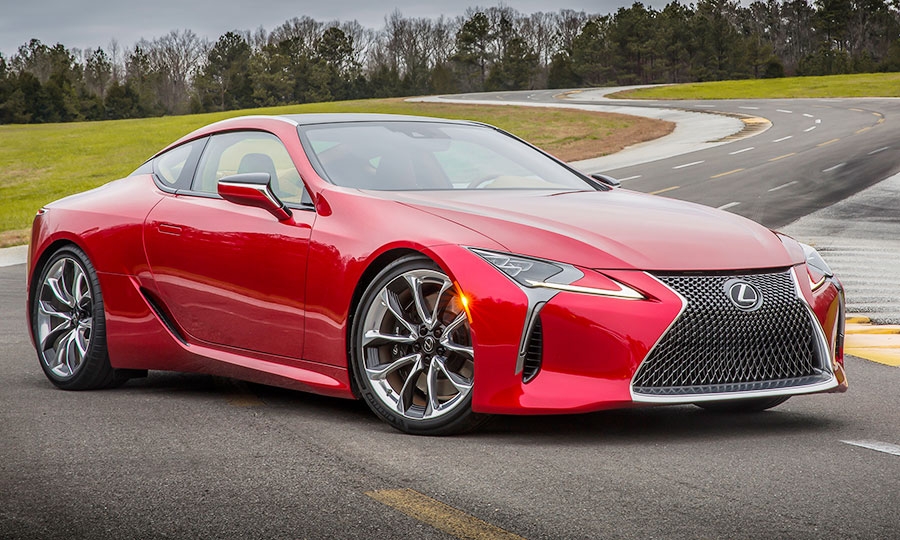 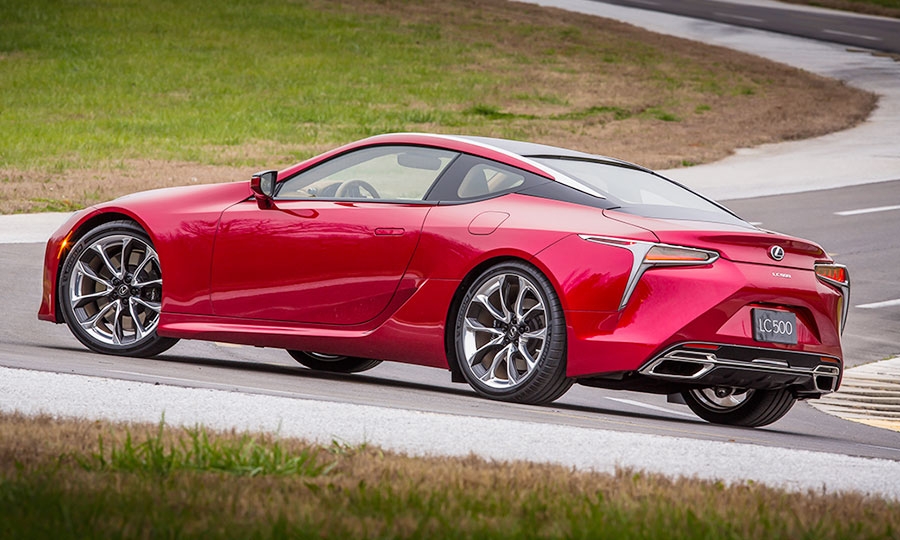 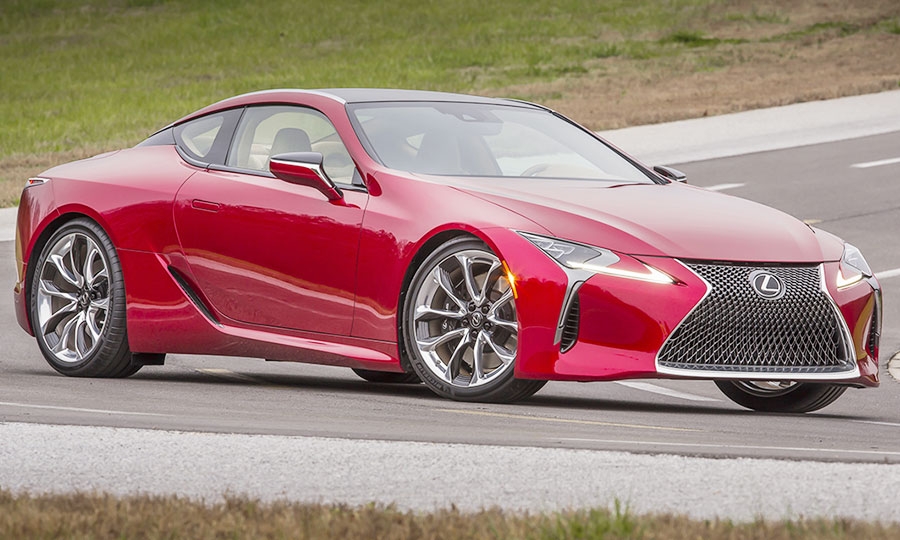 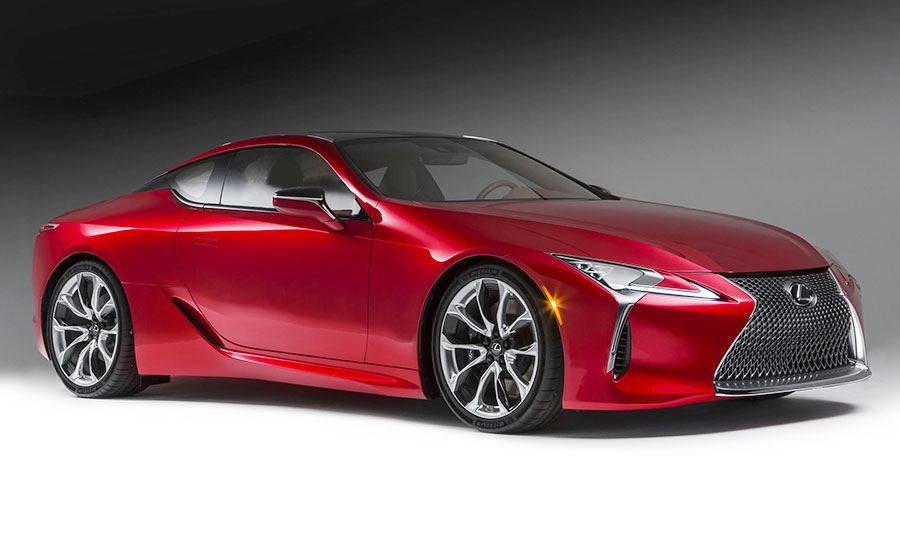 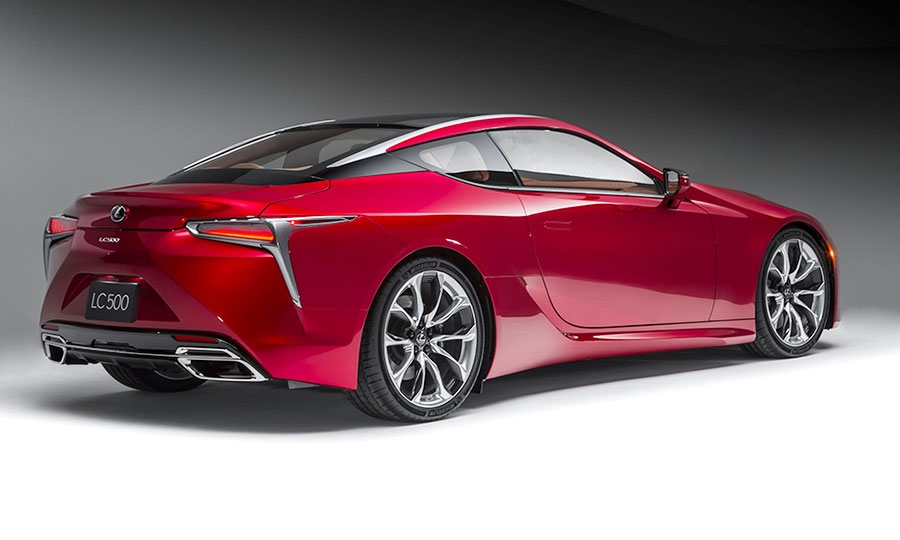 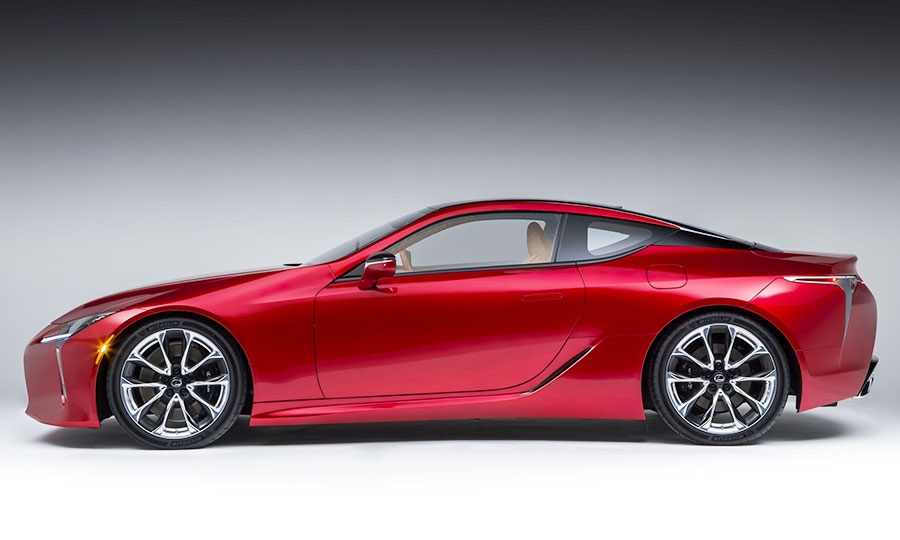 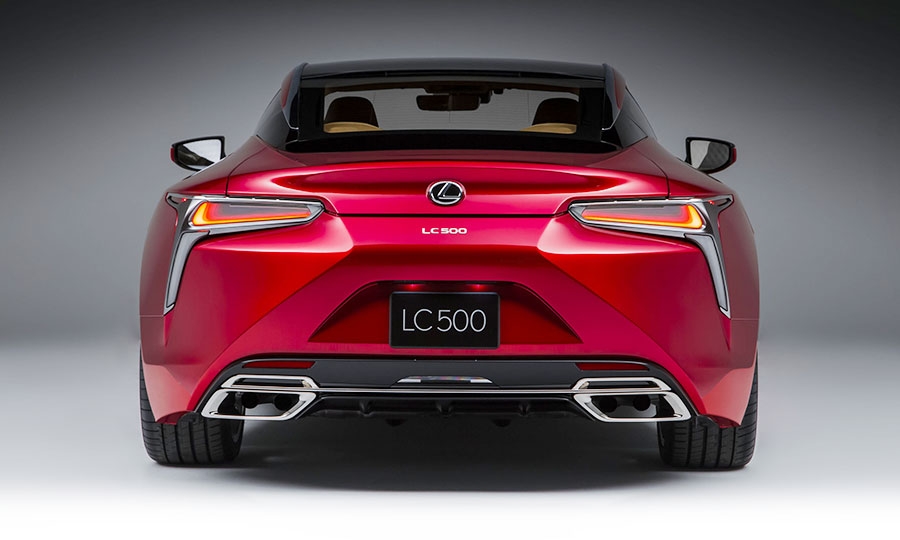 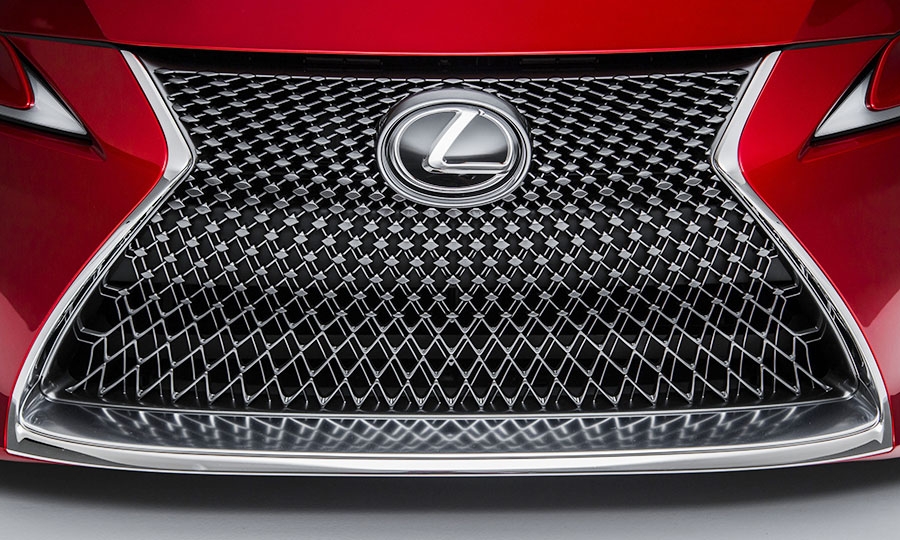 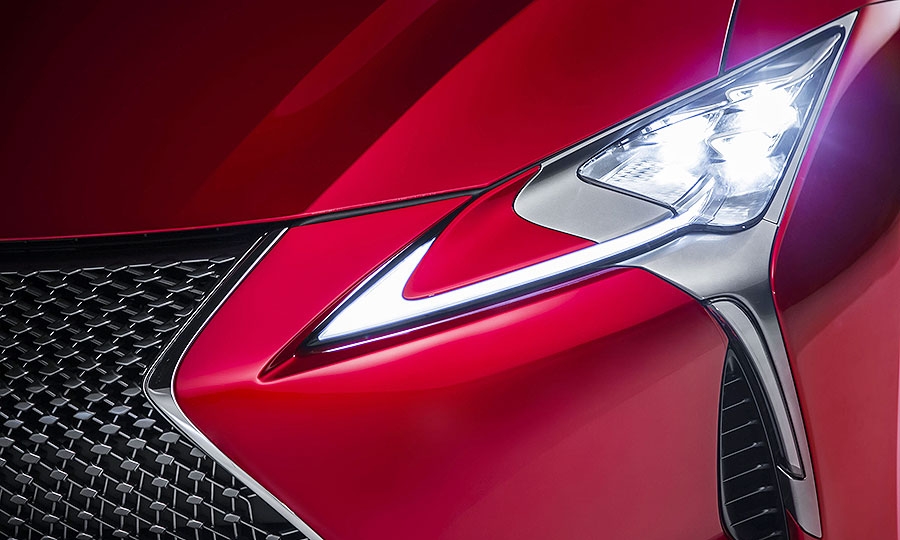 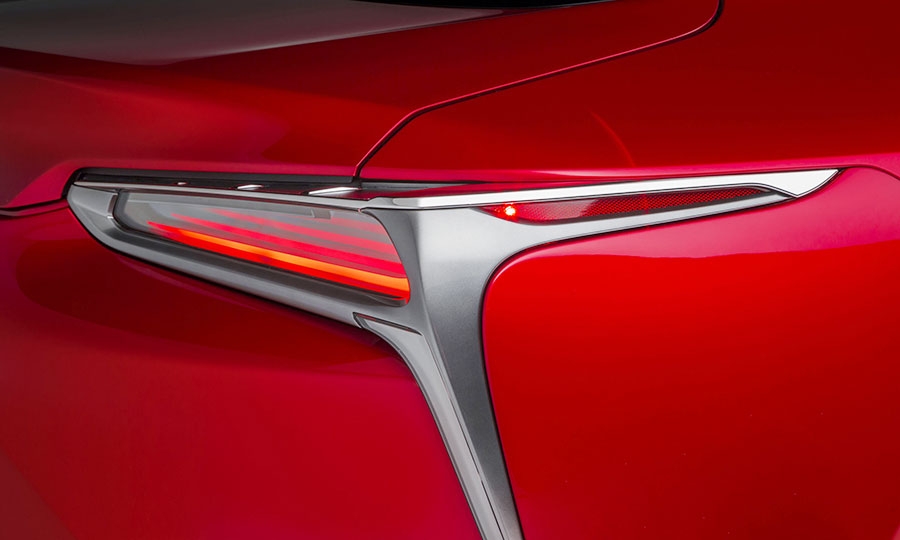 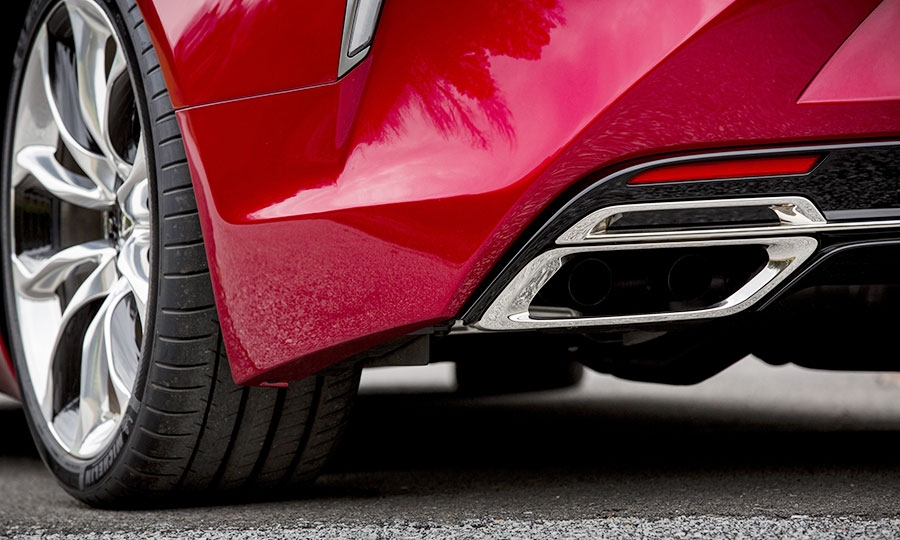 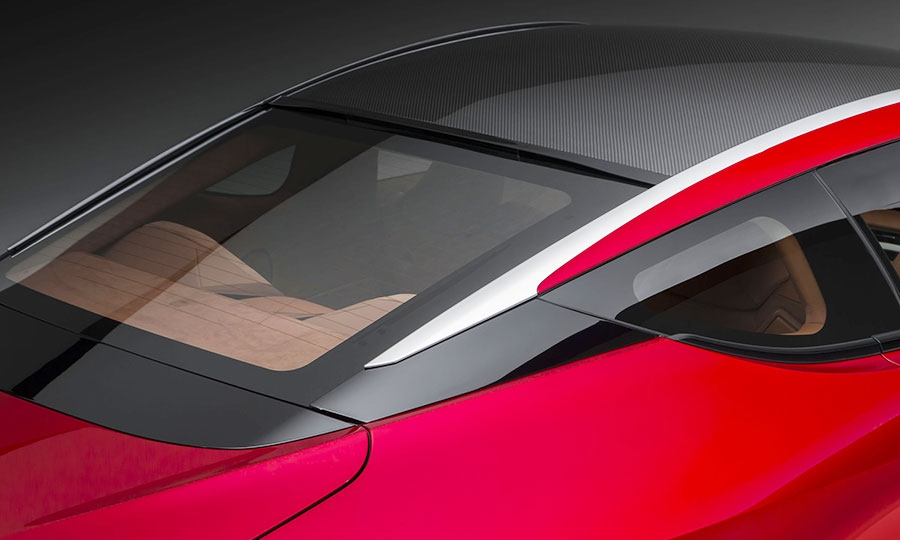 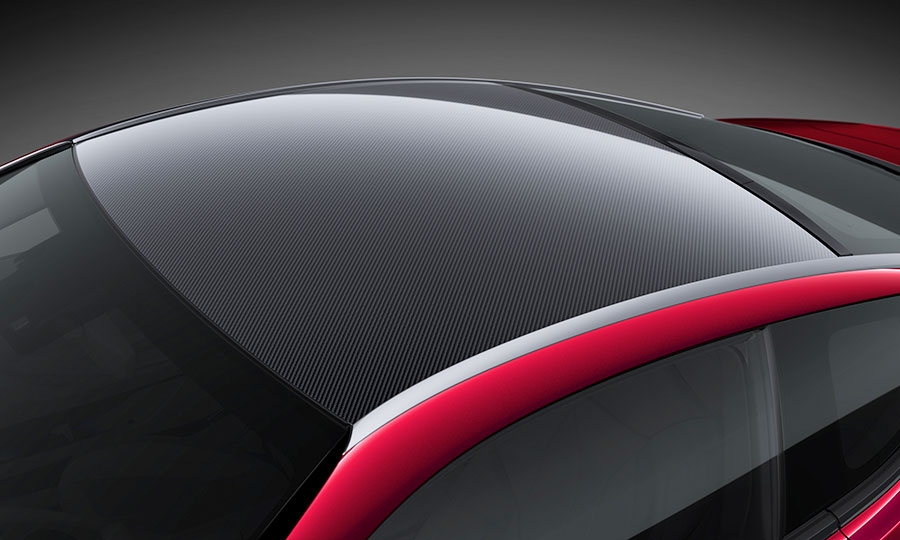 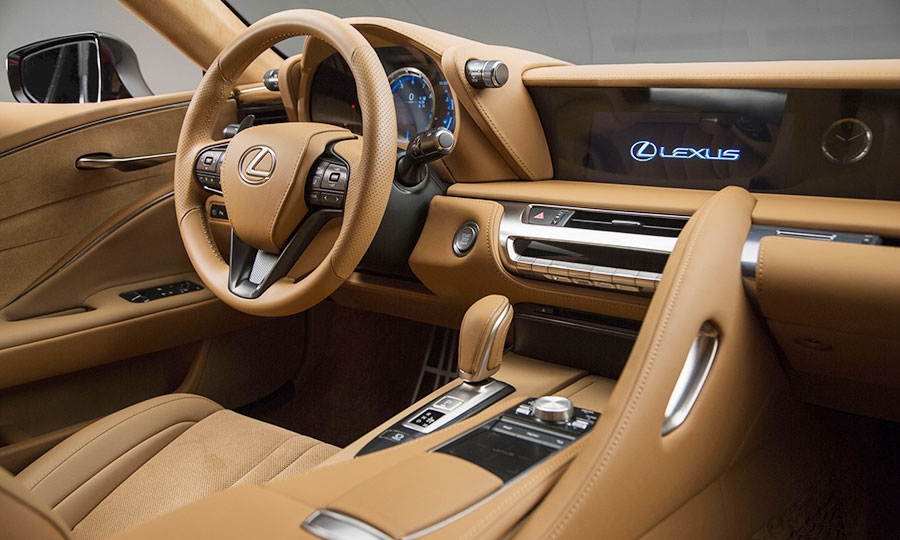 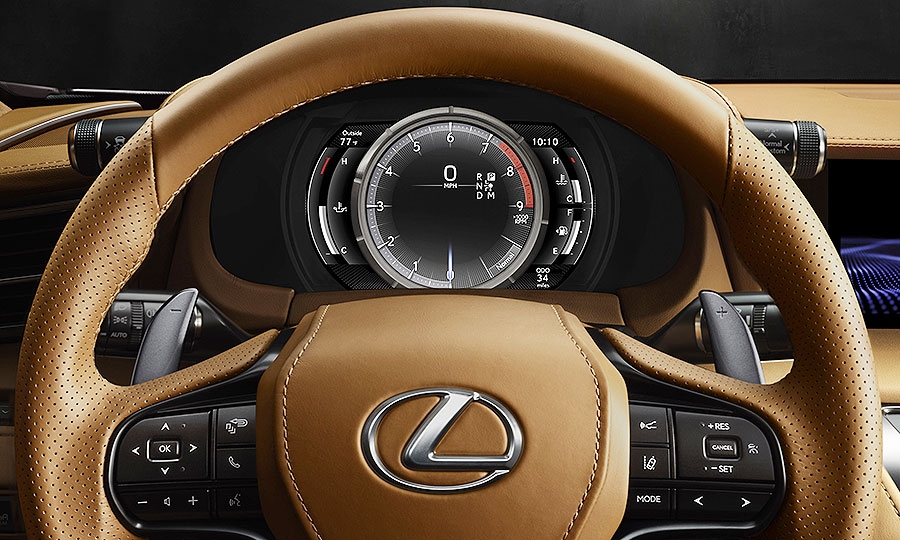 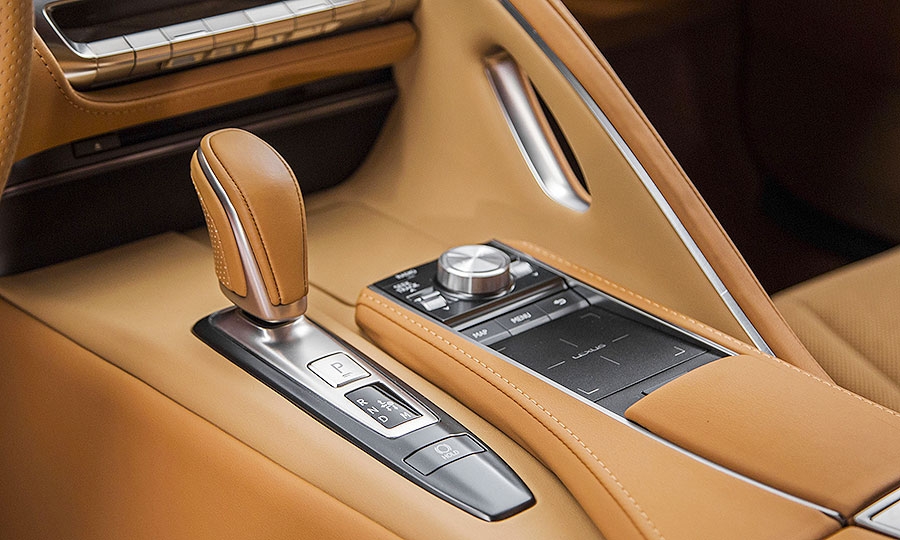 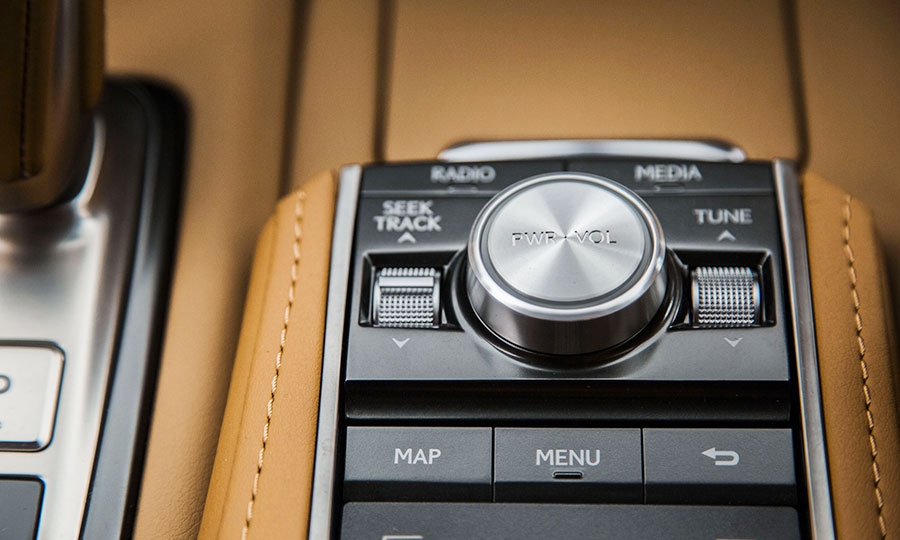 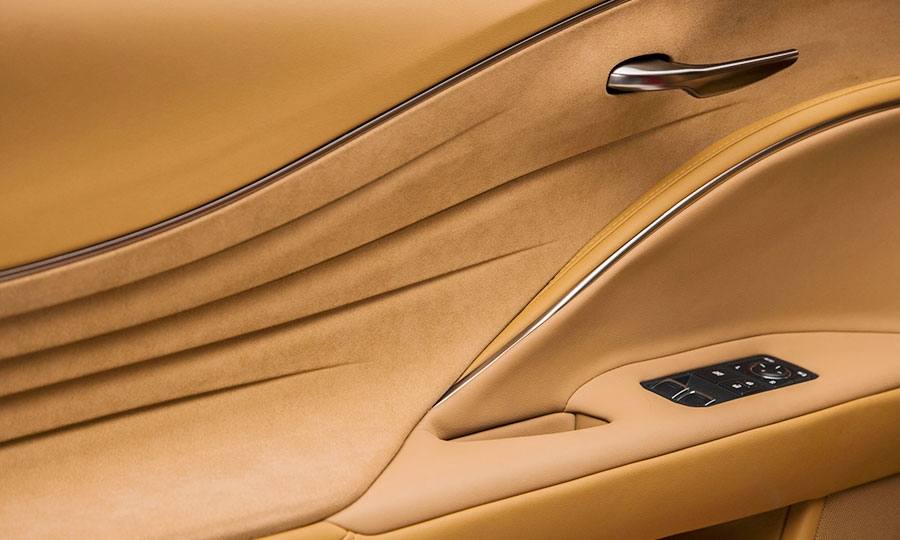 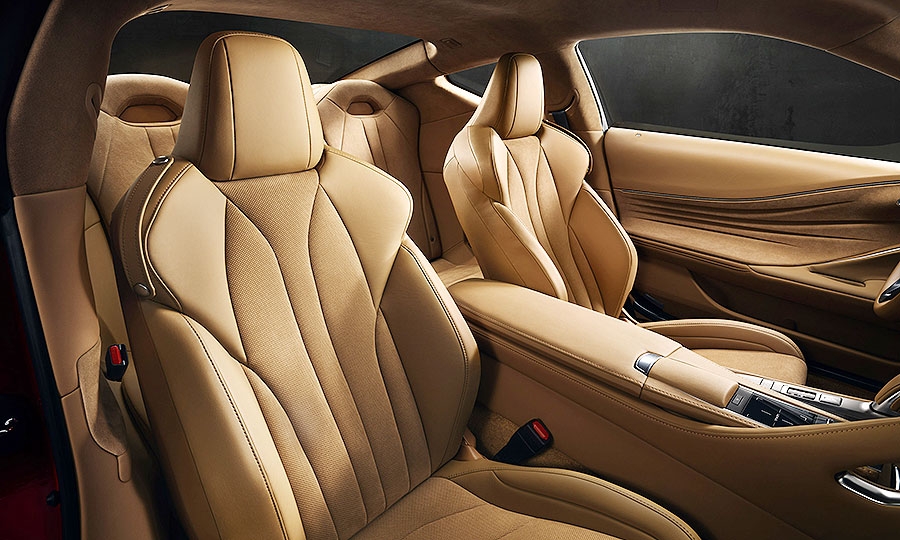 DETROIT -- Lexus hopes to pump a little high-powered adrenaline and glamour into its lineup with the LC 500. The sport coupe, with four seats, is expected to be priced at around $100,000. It is powered by a 5.0-liter, V-8 engine borrowed from the high-performance GS F sedan and RC F coupe that generates 467 hp and 389 pounds-feet of torque. Here’s what journalists, analysts and others have to say about the LC 500, which was introduced at the Detroit auto show:

“Lexus may have cracked the code for how to make a truly beautiful car. The LC 500 couple is the most elegant vehicle ever to flow from a Lexus designer’s pen, and – unlike concept car hits that look great at the auto show but never make it to production- it’s a real car. You’ll be able to walk into any Lexus dealership in a year and drive out in an LC . Lucky you.” -- Mark Phelan, Detroit Free Press

“ ... It will be the first model using a new front-engine, rear-drive luxury-vehicle platform from corporate parent Toyota. The body uses a large percentage of high-strength steel, which Lexus says is more resistant to the torsional twisting forces under hard cornering than the carbon fiber used by other supercar makers … Power is sent to the wheels through a close-ratio 10-speed automatic transmission, enabling a claimed 0-60 mph sprint of less than 4.5 seconds. As befitting a high-performance coupe, the driver will sit quite low to the ground. Using run-flat tires means no spare tire, while affording engineers more flexibility in how to design the car. Lexus also moved the battery to the trunk to help balance overall weight distribution and thereby aid handling. The small, 113-inch LC has its wheels pushed to the corners, providing an athletic stance with short overhangs to the overall length." -- Consumer Reports

“The reality is that every sporting luxury brand worth its lateral g forces needs a performance icon, a flagship to demonstrate the brand’s engineering might. Lexus has been without one since the departure of the LFA. Now the LC has arrived to take up that mantle again.” -- Andrew Wendler, Car and Driver

“All in all, it’s hard not to be impressed with the LC 500. It will be months before we can get behind the wheel of one, but at least from where I’m sitting, it seems Akio Toyoda and the Lexus brand are finally putting their money where their mouths are when it comes to fast and interesting cars.” -- Patrick George, Jalopnik

“Lexus is the Rodney Dangerfield of the automotive world. No matter what the company does, it never seems to get any respect. The company revealed the LC 500 sports coupe … at the Detroit auto show. This two door, which has two small rear seats, has been in the works since the LF-LC concept was presented in Detroit four years ago. It will go [in] production as a 2017 model. As usual, some critics will probably discount the spindle grill and overall design as too busy, painting the LC 500 as just another too-fancy Toyota. To them, I say: get over yourselves. Lexus is producing kick-ass sports cars these days -- though precious few are willing to admit it. It’s time to give this brand some respect. And general consensus at the show has been positive. Even many naysayers are suddenly admitting that the brand is going in the right direction with the LC.” -- Jason H. Harper, The Verge

“But don't think this is a bare-bones speeder. Lexus wants this four-seater to offer both performance and luxury, and the stylish interior, with its optional Mark Levinson audio package and a host of next-generation safety features ensures pampering to go alongside the power.” -- Bob Sorokanich, Road & Track

“The Mercedes-Benz SL has long held the crown for two-door luxury tourer in the upper echelons of price category amongst mainstream luxury brands. With the LC 500, Lexus aims to change that with a new type of flagship taking square aim at the SL. A 10-speed transmission will be interesting on a car of this caliber, but knowing Lexus, they’ll ensure the car absolutely bathes the driver in luxury from head to toe.” -- Akshay Anand, analyst at Kelley Blue Book

“Lexus’s polarizing, Darth Vader-like face must be growing on people because I heard nary a word of criticism about this stunning V-8 coupe from my media colleagues.” -- Henry Payne, The Detroit News

“It also represents a departure for Toyota’s Lexus label, which is trying to become a more performance-oriented brand with stunning styling as it breaks from its reputation for being bland. The powerful, aggressively designed Lexus LC 500 was inspired by the LF-LC Concept, which was first shown three years ago at the North American International Auto Show. Toyota executives say this is their most significant new car since the Lexus LS sedan and predict it could be among the most talked about new cars of the year.” -- Chris Woodyard and Brent Snavely, USA Today and Detroit Free Press

“You’re looking at living proof of the power of public opinion. No, this Lexus wasn’t voted on by a committee, but the popularity surrounding their 2012 LF-LC concept is what drove the all-new LC 500 to the production line. That’s right, this big Lex is actually a production car, but we wouldn’t blame you for thinking otherwise. To our eyes, this is the closest to a concept car a production model has come since the BMW i8 just a few years ago, and we like it. A lot.” -- Brian Leon, New York Daily News

“As wild and angular as the outside is, the inside is relatively subtle, with a fairly straightforward design and a driver-oriented cockpit. Lexus says the cockpit was designed so that the driver's hip point would be as close as possible to the car’s center of gravity.” -- Brian Wong, Cars.com

“Coupes are an increasingly endangered species in the automotive universe, but a low-volume, high-end machine like the 2017 Lexus LC 500 should find its share of customers at a price we expect to touch six figures. More than that, though, it is a rolling embodiment of how far Lexus has come since that Pebble Beach press conference, and where Toyoda-san and his team see it going.” -- Mike Floyd, Automobile

“.. [Toyota president Akio] Toyoda noted that like Sofia Vergara, he may have a slight accent when speaking in English, but the language he does speak is cars. We’ve driven prototypes of the LC 500 before, and we can’t wait until we drive and test a production-ready model.” -- Zach Gale, Motor Trend

“Lexus continues to redefine itself as a more passionate and emotional brand, which is why a premium rear-wheel-drive coupe makes sense. The LC 500 backs up its performance pedigree with head-turning style to drive home Lexus’ new attitude. The brand always has been a respectable luxury nameplate, but the LC 500 is the kind of perception-altering vehicle Lexus needs to get beyond its refined and rational image.” -- Karl Brauer, senior analyst at Kelley Blue Book

“While I applaud Lexus for being daring in its designs, I worry the LC will feel about as numb to drive as your jaw after a root-canal. Modern sporty Lexii (plural for Lexus, I think) have looked and sounded the sporty. But when it came to actually driving sportily, they've been a let down. That said, if you're interested in a car that looks more aggressive than it actually is, the LC should be on your list.” -- Nick Jaynes, Mashable