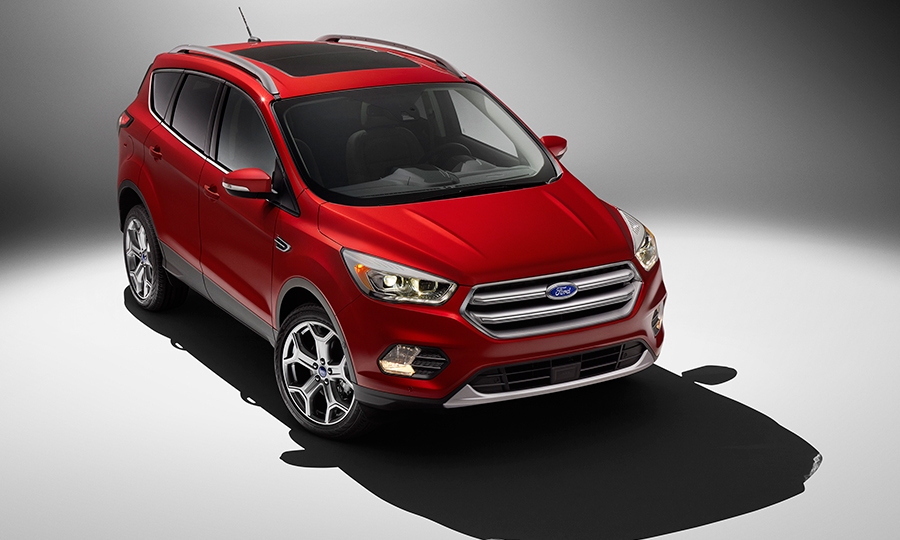 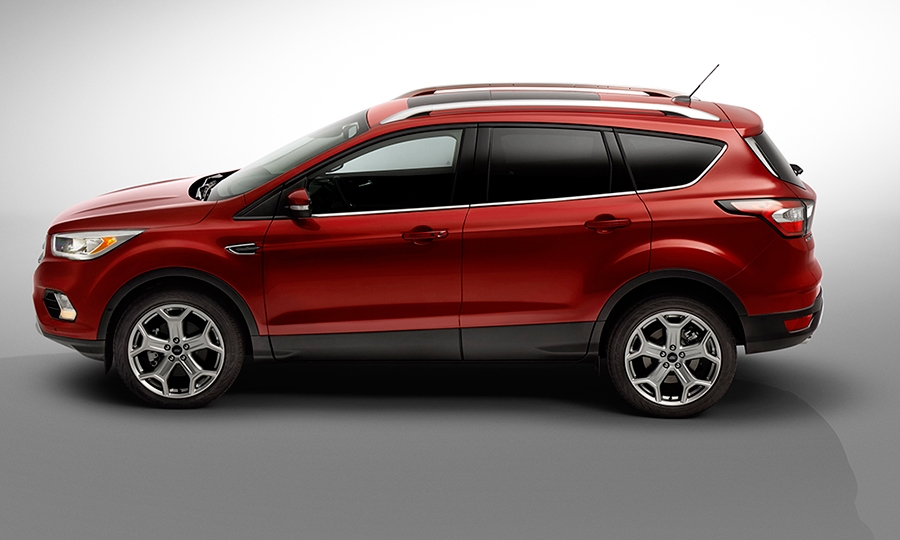 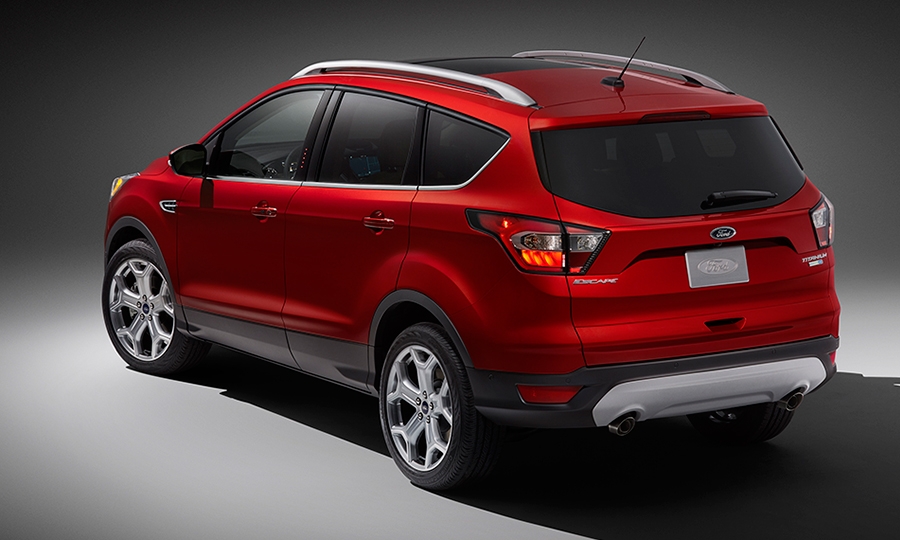 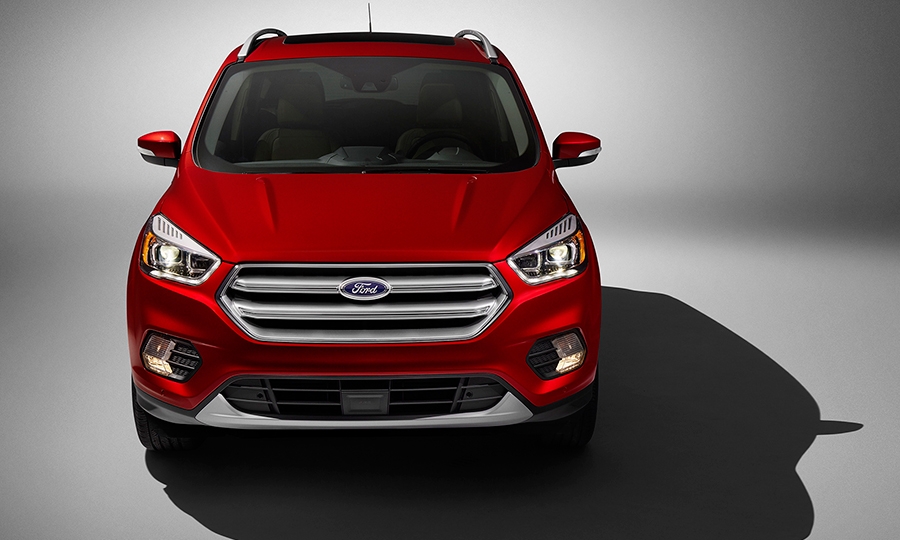 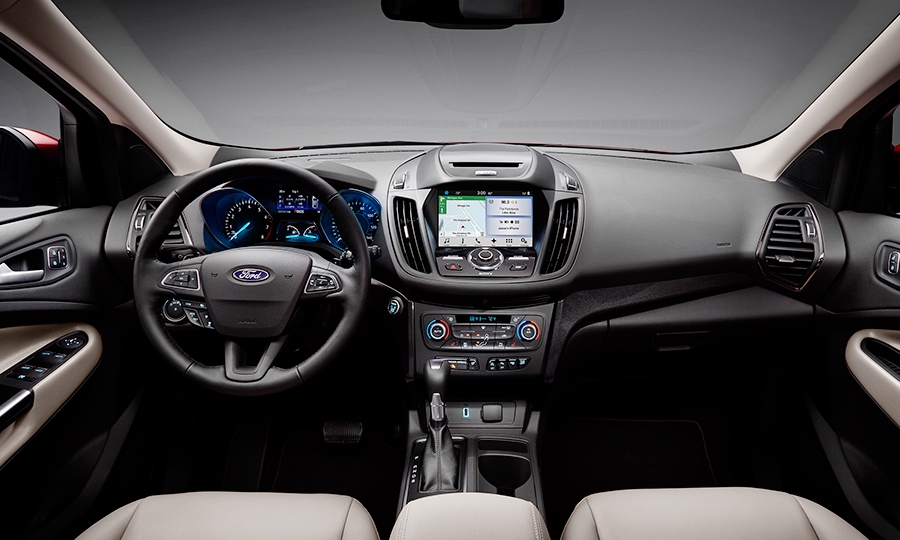 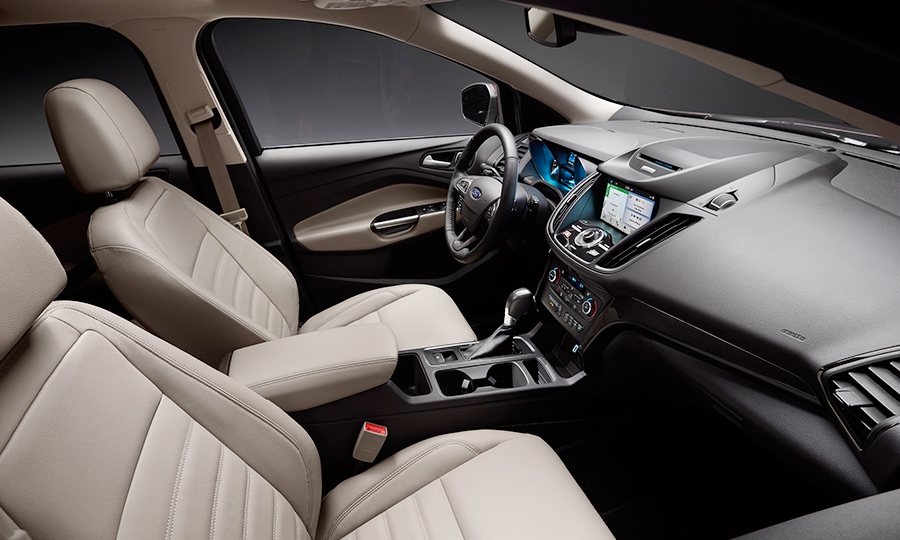 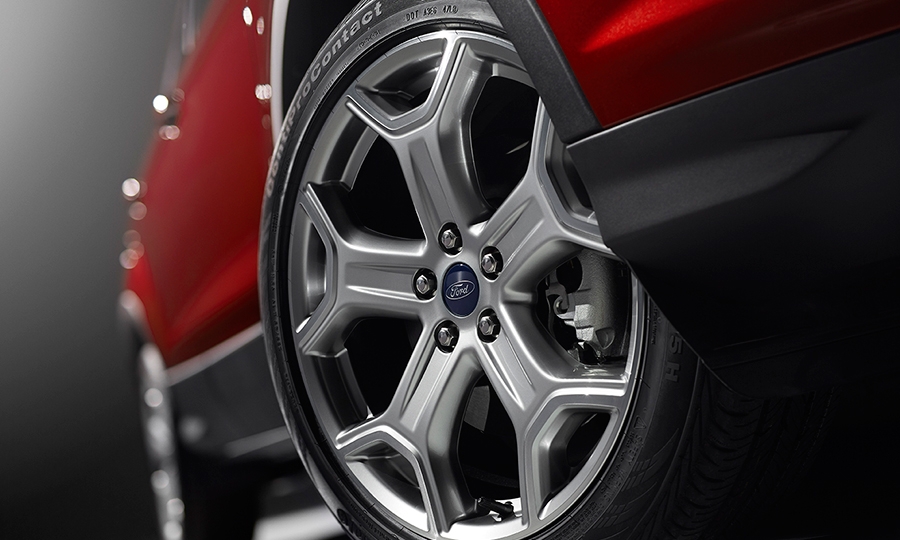 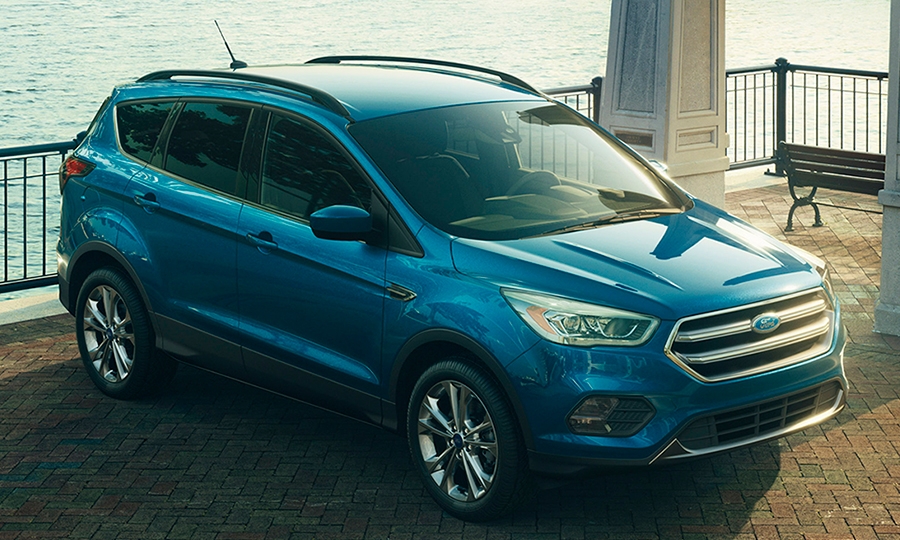 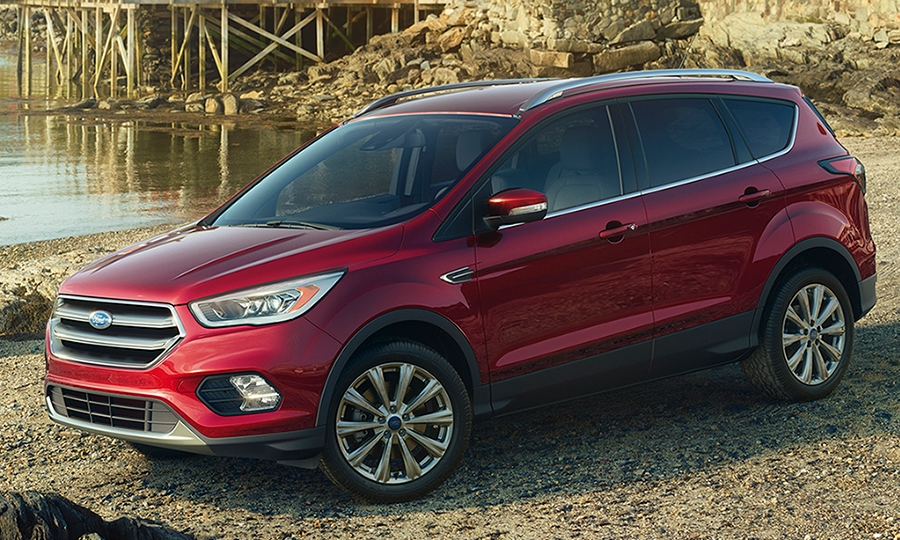 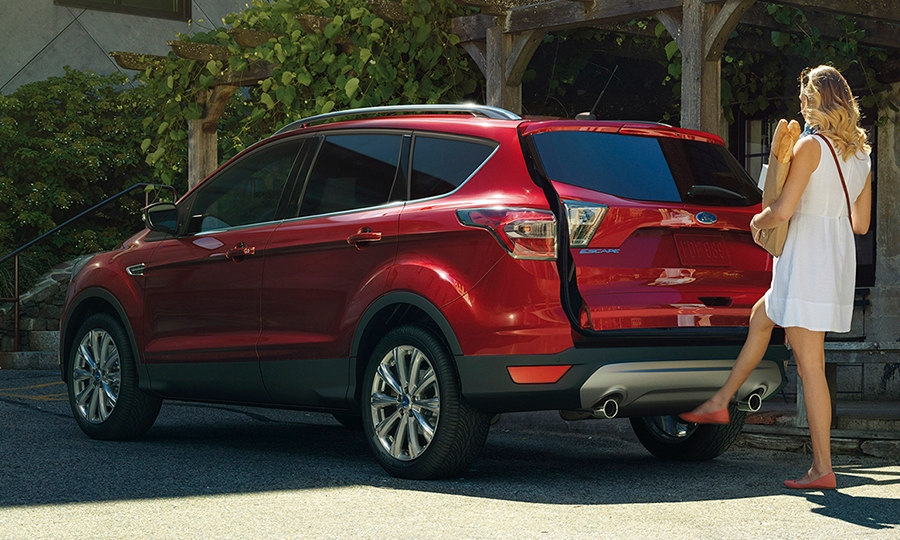 The refresh of the Escape, Ford’s top-selling nameplate after the F series pickup, follows updates this year to the Edge and Explorer crossovers, giving the automaker a lineup of fresh utility vehicles. Its biggest SUV, the Expedition, is expected to be redesigned in 2017.

The 2017 Escape, due out in late spring, gets a redesigned interior and two new four-cylinder EcoBoost engines, both of which come packaged with stop-start to improve fuel efficiency.

The changes and a planned increase in supplies could help the Escape narrow the sales gap with the top-selling crossover, Honda’s CR-V, which leads the No. 2 Escape by fewer than 31,000 vehicles through October.

The next Escape will be the first vehicle with Sync Connect, an expansion of Ford’s connectivity system that lets drivers start and lock or unlock their vehicles via smartphone app and offers driver-assist features such as lane keeping and a warning if a vehicle detects signs of driver fatigue.

“We’re taking our best stuff and bringing it down to our most-affordable and highest-volume SUV,” said Milton Wong, the Escape’s chief engineer.

Ford said the Escape, which it’s unveiling today ahead of the Los Angeles Auto Show, represents the industry’s highest-volume rollout of auto stop-start. It will come standard on the SE and Titanium trims, which account for a combined 90 percent of current Escape sales.

Ford made a number of hardware upgrades to make the stop-start process more seamless and avoid annoying or startling drivers, including an enhanced start motor, a unique battery and a brake pressure sensor.

“We want customers to use it,” Wong said. “For them to use it, it’s got to almost be invisible. That’s how we’re going to do good with this technology.”

The start-stop feature comes with one of two EcoBoost engine options.

Ford is replacing the 1.6-liter engine on the current Escape with a 1.5-liter motor that’s estimated to produce roughly the same horsepower and torque. Or buyers could step up to a 2.0-liter, twin-scroll engine, introduced earlier this year in the Edge, that Ford says creates less vibration and noise than the outgoing 2.0 liter.

Even with the stop-start feature and new engines, Ford doesn’t expect the Escape’s fuel economy rating to rise in comparison to the outgoing model. It might even fall slightly to better reflect real-world performance.

Ford has focused on improving capability and adding features more than increasing fuel economy in several recent updates to its car and light-truck lineup.

The base model S trim will use a carryover 2.5-liter naturally aspirated engine.

The trapezoidal front grille is much larger than on the current Escape, bringing it more in line with the look of the redesigned Edge.

Inside the cabin, Ford said it changed the design or material used on nearly all surfaces that customers will touch, including the steering wheel, dashboard and climate controls. Sync 3, which replaced MyFord Touch in the 2016 Escape, now will come with five free years of the Sync Connect mobile access. The glove box is now a bin that swings outward for easier access to its contents.

On the center console, Ford replaced the mechanical parking-brake lever with an electronic button, freeing up space to reposition the gearshift and add storage areas large enough for today’s oversize phones and sunglasses. (The Escape is Ford’s most female-oriented vehicle, with women accounting for 53 percent of buyers.)

Besides adding new features and improving the styling, Ford hopes the refresh will help the Escape move past the mechanical issues that have plagued it since being redesigned for the 2013 model year. Ford has issued 16 recalls for problems including engine fires, airbags not deploying, fuel pump seizures, warning lights not working and doors flying open while the vehicle is moving.

Some of the biggest recalls involved the 1.6-liter engine that’s being discontinued.

Though the Escape will look more like the Edge, and both are two-row, five-passenger crossovers, they’ll still appeal to different groups of consumers, said Crystal Worthem, marketing manager for the Escape and Fusion.

Buyers of the Escape, which starts at about $5,000 less than the Edge, tend to be younger and have fewer children. The Edge offers significantly more cargo space, making it the more practical option.

“It’s a matter of whether I can go to Costco comfortably,” Worthem said.

The Escape is the more popular of the two, with U.S. sales of 257,731 this year through October, compared with 105,720 for the Edge. Ford says it would sell even more Escapes if not for capacity constraints caused by last year’s introduction of the Lincoln MKC, which is built alongside the Escape at the Louisville Assembly Plant. Escape sales are up 1 percent this year, vs. a 12 percent gain for compact crossovers overall, according to the Automotive News Data Center.

Ford is addressing that problem soon, according to its tentative agreement with the UAW, which workers are voting on this week. Highlights of the deal distributed to workers show that production of the MKC will move elsewhere to increase Escape output, though it’s unclear which plant will add the MKC or when the shift will take place.

“We sell every Escape we can make,” said Kevin Schad, Ford’s brand manager for the Escape.

The updated design and added capacity could allow the Escape, which was introduced in 2000, to challenge the Honda CR-V for the title of top-selling utility vehicle. The CR-V has been No. 1 each year since 2012, when the Escape was last redesigned.