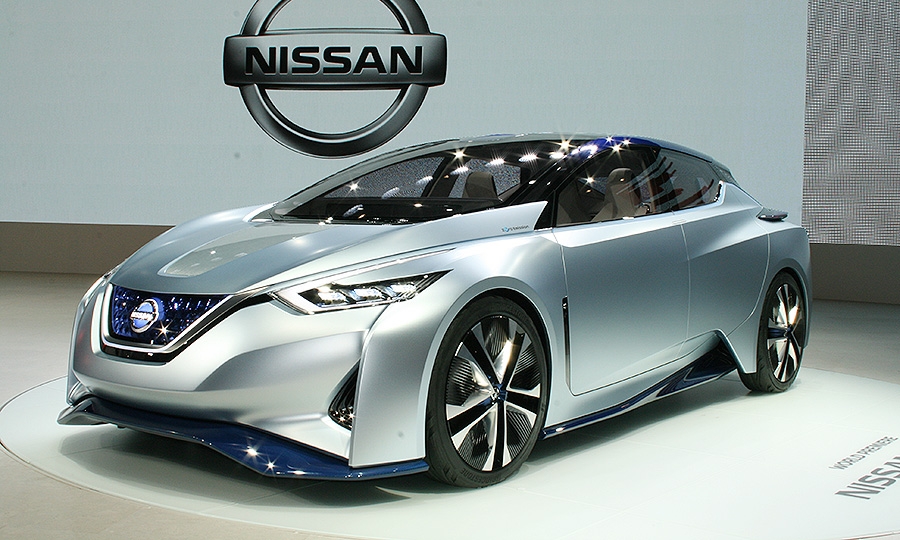 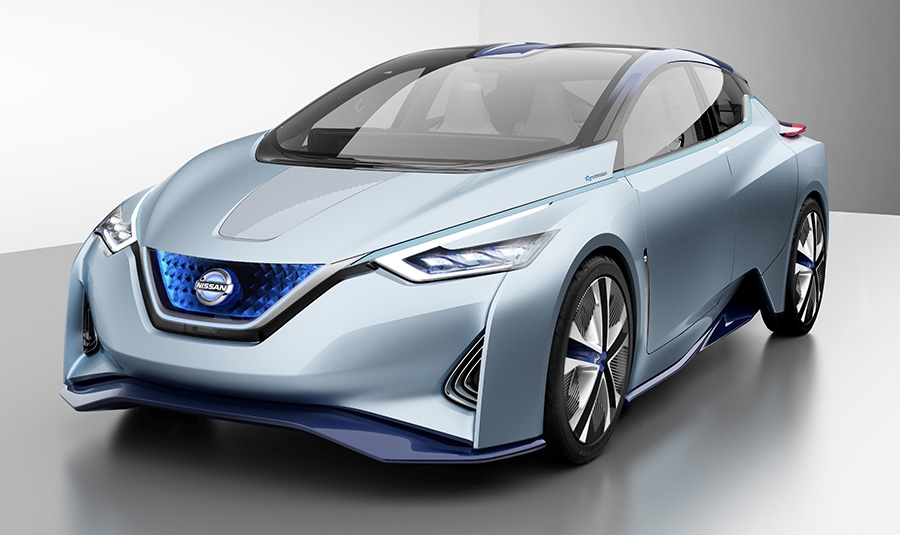 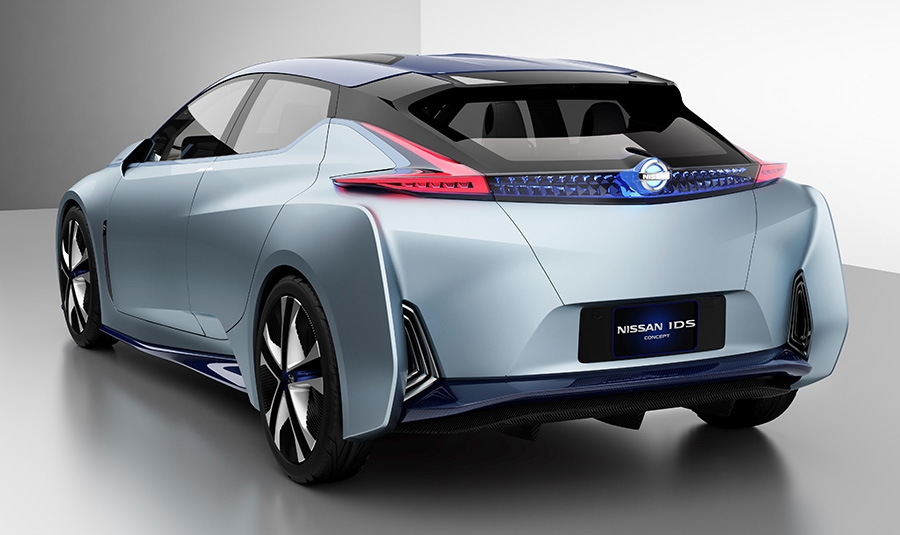 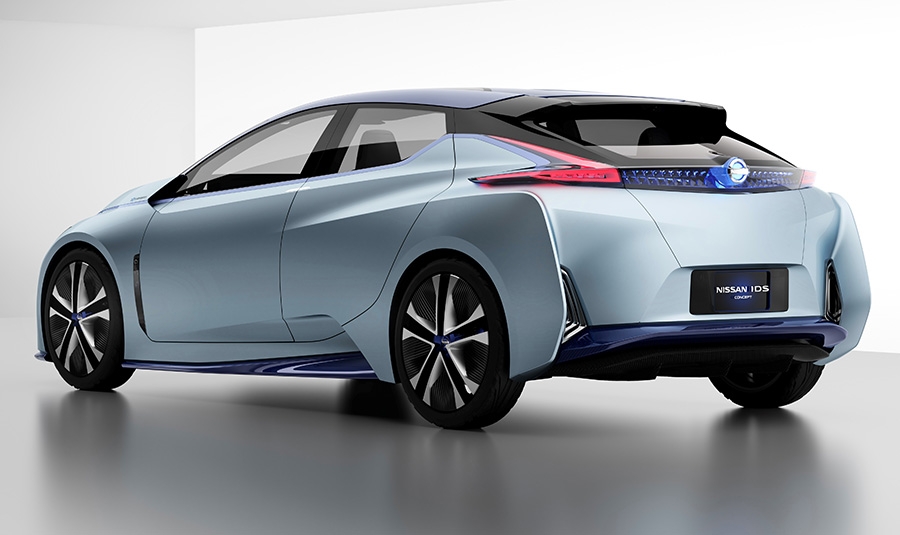 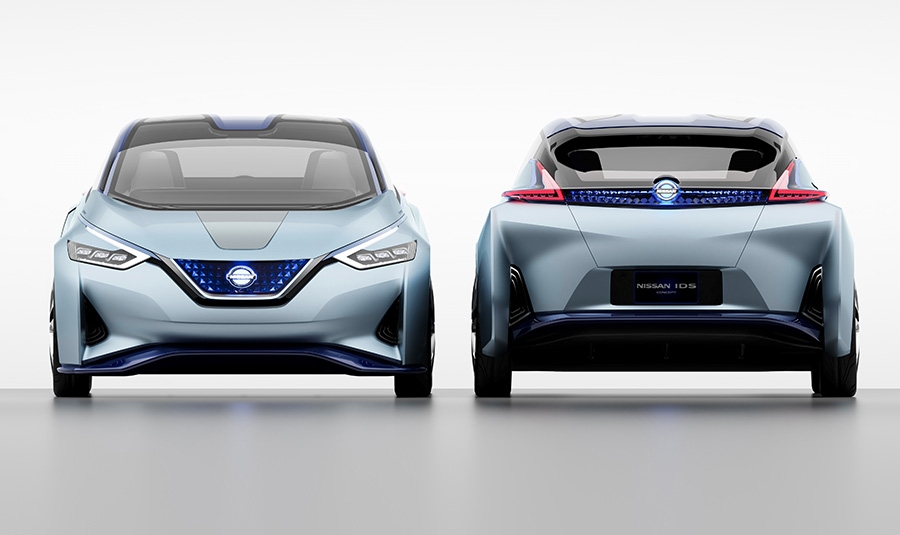 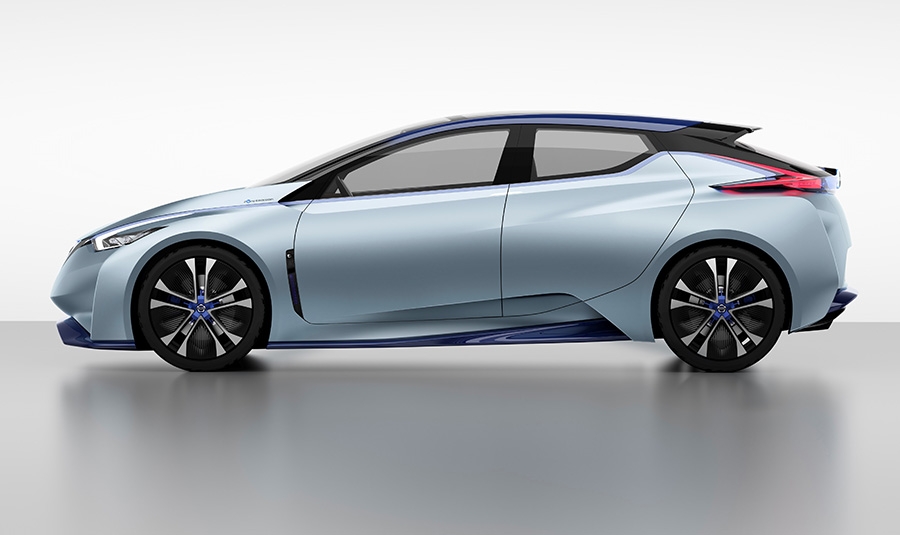 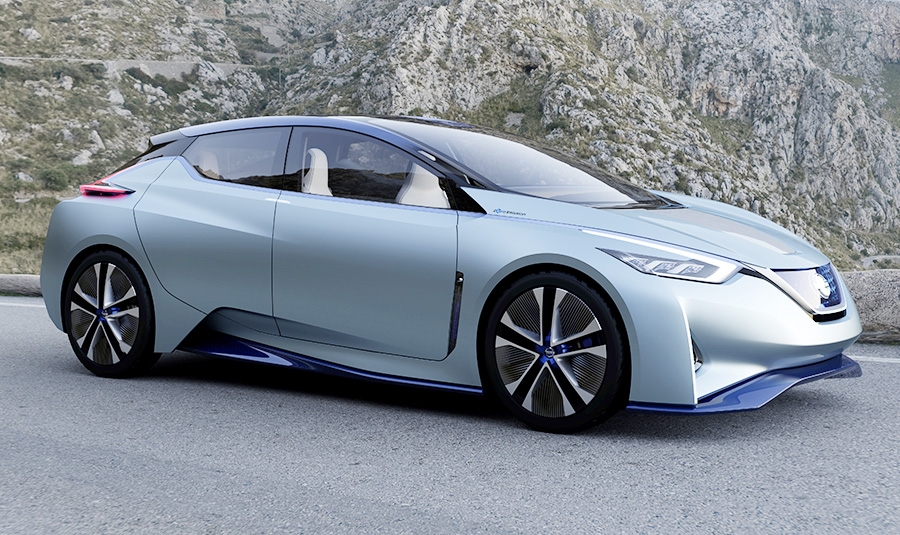 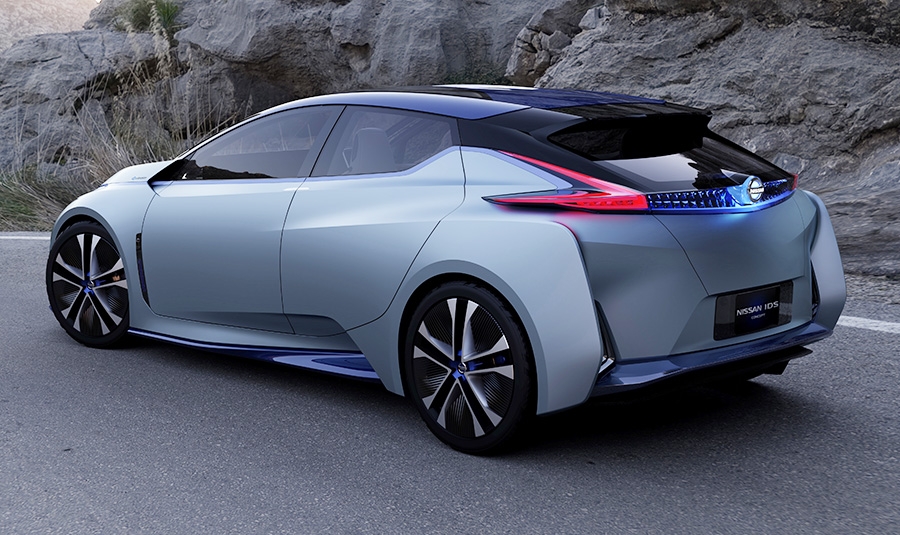 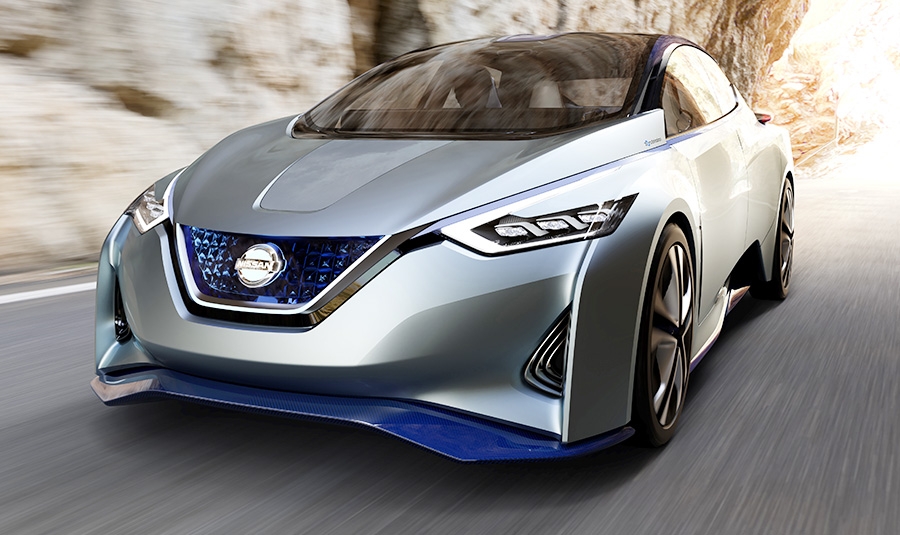 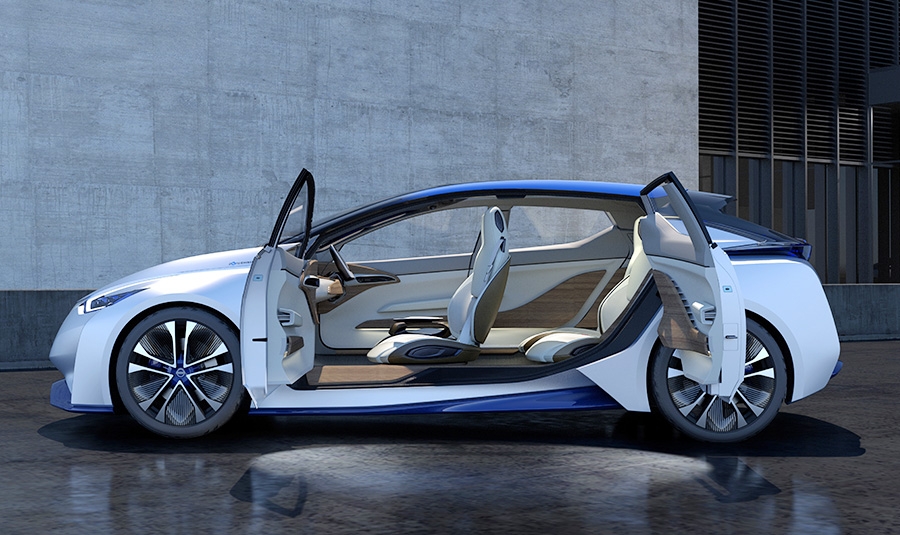 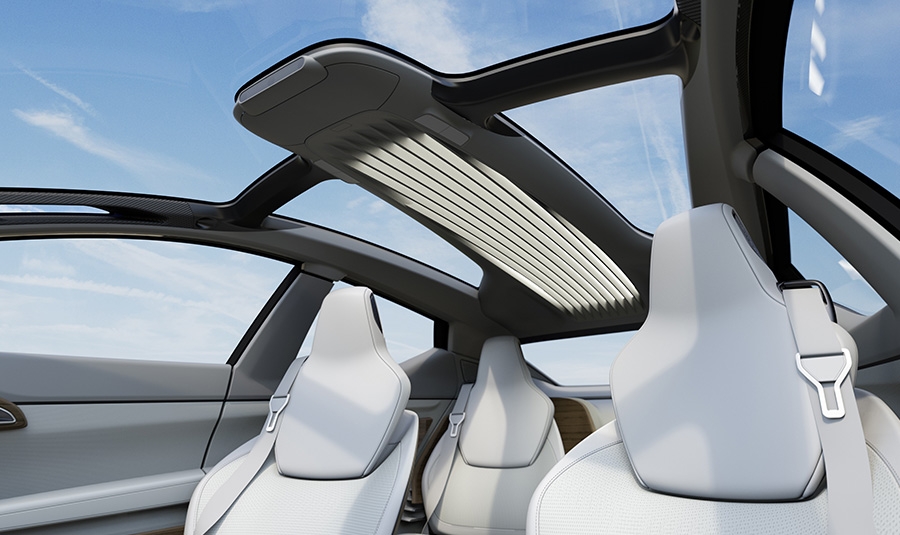 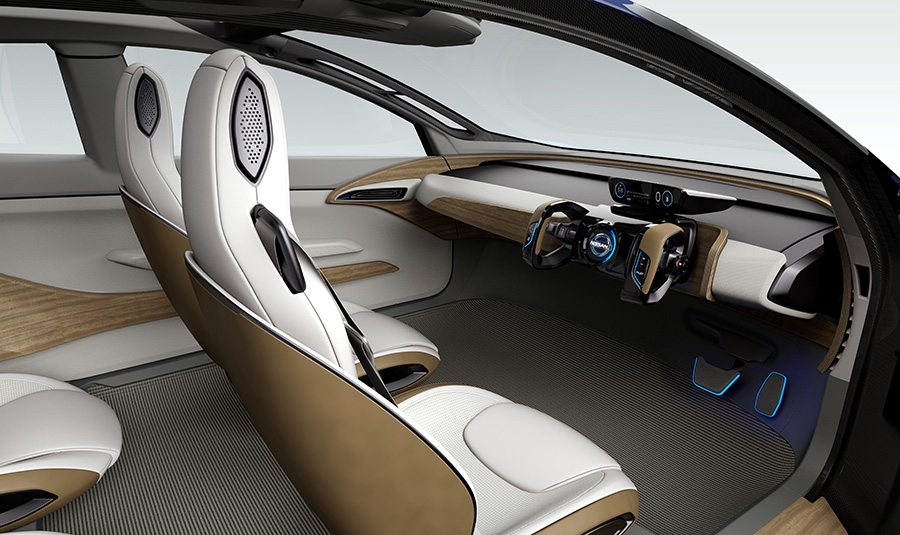 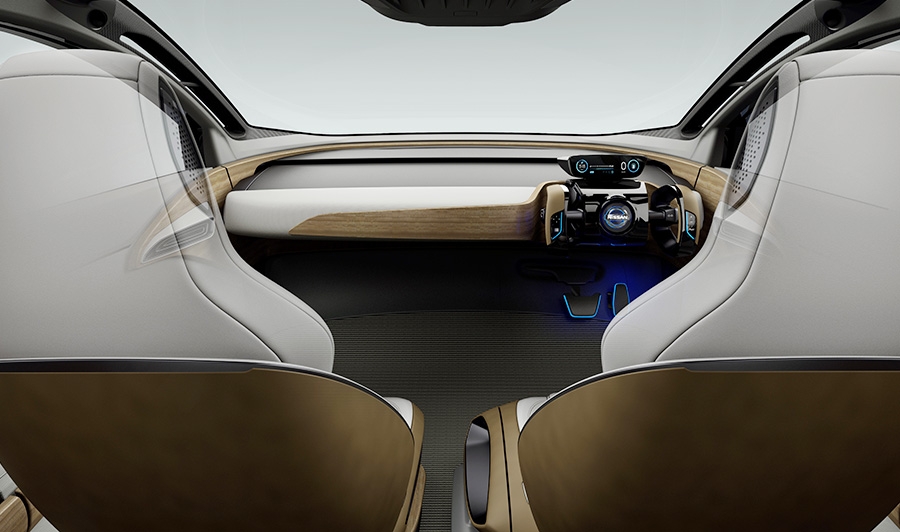 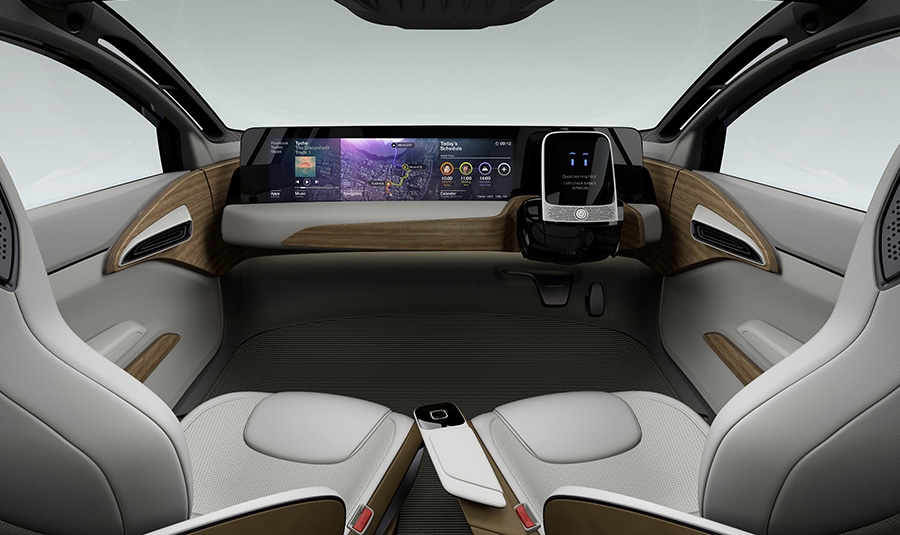 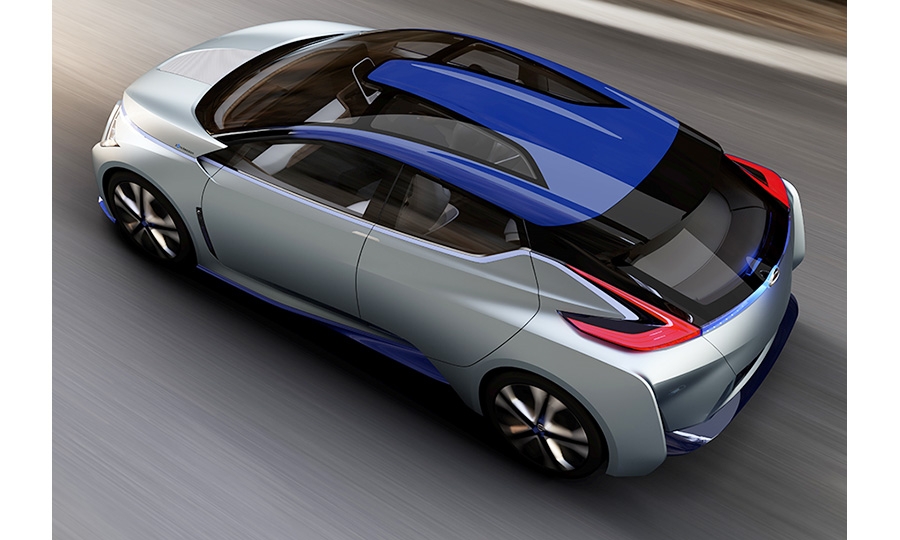 ATSUGI, Japan -- Nissan Motor Co., aiming to take leadership in electric and autonomous cars, debuted its vision for both in a concept whose interior automatically reconfigures like a Transformer robot depending on the driving mode.

The supersleek IDS Concept hatchback showcases a host of new technologies Nissan is developing in its push to roll out increasingly sophisticated autonomously driving cars by 2020.

It includes a prototype next-generation lithium ion battery with double the energy density of the pack in today’s Leaf electric vehicle.

The car was unveiled officially at the Tokyo Motor Show, but was shown to the press in advance at Nissan’s technical center here on the outskirts of Tokyo.

The IDS Concept gets its name from Intelligent Driving System, a suite of technologies Nissan is packaging under the catchphrase: “Because driving is a full-time job and humans are only human.”

Nissan has been chasing autonomous driving since August 2013, when CEO Carlos Ghosn announced plans to have cars with self-driving technologies in multiple vehicles by 2020. Nissan’s push comes as traditional automakers face new high-tech rivals from Silicon Valley that are using their software expertise to develop the advanced electronics needed for the systems.

The IDS Concept brims with autonomous driving and artificial intelligence systems that foreshadow what Nissan has in store.

Among Japanese automakers, Nissan has been the leader in this field, said Egil Juliussen, principal analyst for autonomous driving at IHS Automotive.

Mercedes-Benz is generally considered No. 1 among global players, but the technology is so new and fast-moving that new competitors can quickly rise to the fore, Juliussen added.

Nissan said it expects to deploy Intelligent Driving technologies seen in the IDS Concept in the 2020s.

“Nissan Intelligent Driving improves the driver’s ability to see, think and react. It compensates for human error,” Ghosn said in a release. “As a result, time spent behind the wheel is safer, cleaner, more efficient and more fun.”

The fun starts with a hideaway steering wheel and rotating instrument cluster that disappear during autonomous mode.

The cockpit layout for Manual Drive is fairly traditional.

But switch it into autopilot, and watch the transformation unfold. The steering wheel rolls away, while the instrument cluster pivots forward to reveal a giant iPad-like touch screen where the steering wheel used to be.

Meanwhile, all four seats rotate inward for a more intimate setting for human interaction as the machine takes over.

The car knows where it’s going because it bristles with radar sensors, cameras and laser scanners to get a 360-degree view.

“The driving ability exceeds that of humans,” said Takashi Sunda, a deputy director of r&d. “People can only focus on one thing at a time, but in the case of the vehicle, it is superior because it can focus on many objects at once.”

To let other cars and pedestrians know the car is tooling around in autopilot, designers gave the IDS Concept a so-called Intention Indicator, a strip of LED lights that wraps around the outside of the car. In Piloted Drive, it shines blue when pedestrians or cyclists are nearby and signals that it is aware of a person’s position by emitting a white light that tracks the body’s movement around the car.

Self-driving mode keeps in character to the owner’s driving habits, thanks to artificial intelligence.

When the driver is in Manual Drive, the software analyzes how he or she accelerates from stops and slows for curves and deals with congestion. When it’s the computer’s turn to drive, it remembers those quirks and tries to emulate that driving style.

The company pitches the technology as a safety feature that prevents accidents. But Nissan hasn’t branded safety technology as successfully as such rivals as Toyota or Subaru, said Eric Lyman, vice president of industry insights at TrueCar Inc.

“Nissan is certainly competitive with safety technology, but they don’t seem to have the association with safety that other brands have,” Lyman said. “A branded strategy can be the catalyst for consumers to make the connection of an automaker’s safety initiatives with the shopping process.”

While much of the IDS Concept’s gadgetry is futuristic, other features are closer to reality, beginning with the electric drivetrain.

Nissan has equipped the IDS Concept with a 60 kilowatt-hour lithium ion battery that is undergoing road tests and promises to dramatically boost range. The upcoming battery, which executives say is close to being production-ready, doubles the density of the latest 30 kilowatt-hour pack in the Leaf.

“A prototype vehicle with the 60 kilowatt-hour battery is already running around with a numbered license plate,” said Takao Asami, Nissan Alliance global vice president for research and advanced engineering. “From a technical point of view, the technology is already available. We still have to go through production engineering and product engineering phase.”

Nissan did not offer a range for the new battery.

The Leaf’s recently improved 30 kWh battery gets an EPA-rated driving range of 107 miles for a full charge.

Engineers improved on that battery by switching to a manganese, nickel and cobalt chemistry for the cathode, from the current base of manganese-nickel. They also devised a better electrolyte, which improves the battery’s life span.

On the outside, the wedgelike design delivers what Nissan says is an industry-leading drag coefficient of 0.20. Wing-shaped fenders help smooth airflow around the car, while further gains come from a low profile, thin tires and a flat bottom.

Substantial weight loss comes through the use of an all-carbon fiber body. Though prohibitively expensive today, Nissan says falling costs will gradually make carbon fiber a viable choice, especially for EVs where low weight is at a premium.

“We are not ready now, but we are developing this for beyond 2020,” said Yasuhiro Tosaka a body engineer who works on lightweighting in Nissan’s advanced engineering division.

The goal is to bring the cost of carbon fiber down to around 20 euros ($22.03) per kilogram, compared with more than $110 per kilogram today, he said. High-tensile steel, by contrast, costs less than $4 per kilogram, depending on the grade, he said.

The IDS Concept builds on technology being tested in a small fleet of sensor-laden Leafs that can change lanes, pass cars and merge on highways by themselves.

That will be followed, by the end of the decade, by a smart-assist feature that will enable Nissan’s cars to negotiate city intersections without driver intervention.

Nissan will kick off the push by launching a technology called Piloted Drive 1.0 in Japan by the end of next year.