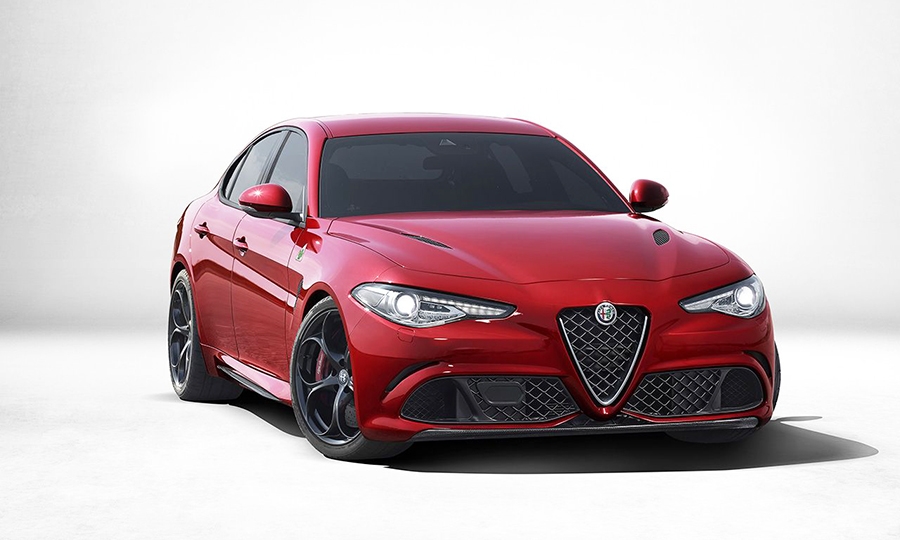 The Giulia Quadrifoglio will go on sale in Europe early next year and in the U.S. a few months later.
Share 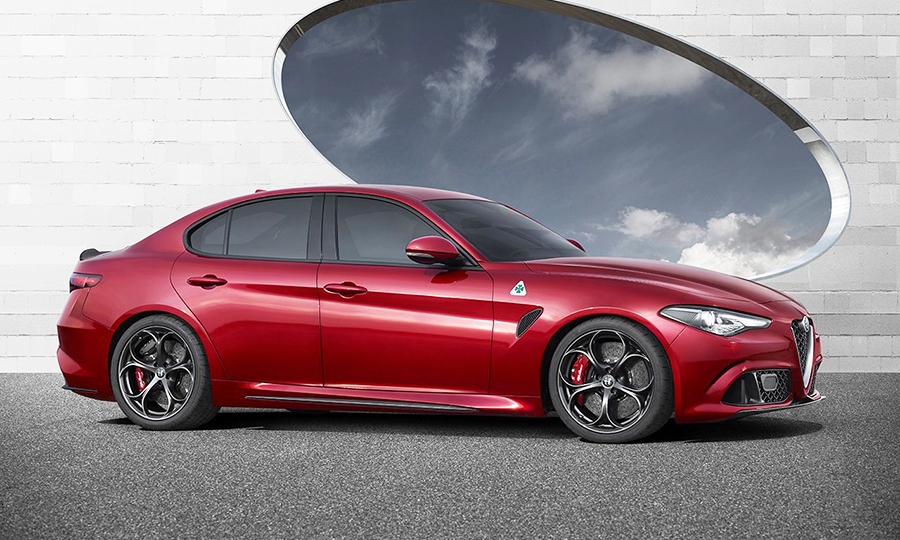 The Giulia Quadrifoglio (cloverleaf in Italian) is powered by a twin-turbocharged 3.0-liter engine used in the Maserati Quattroporte and Ghibli sedans.
Share 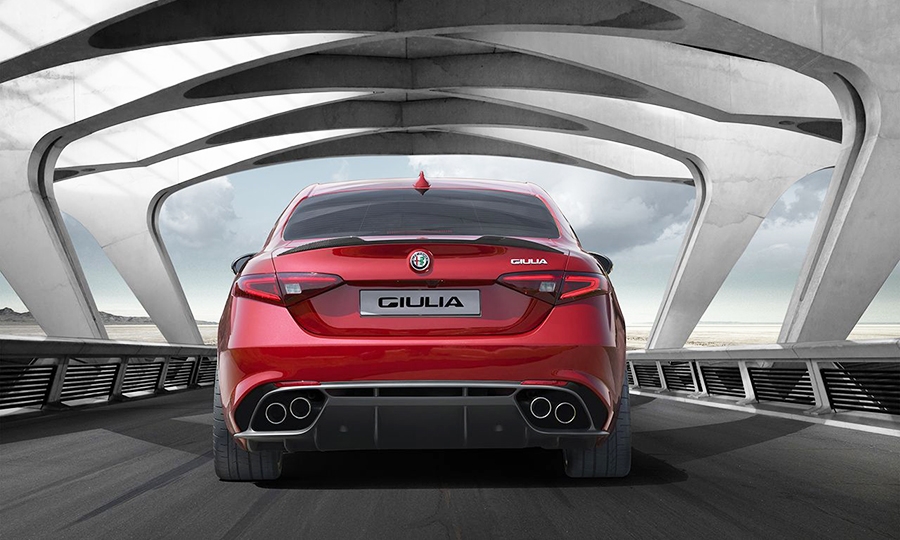 The car delivers 85 hp more power than the BMW M3 (425 hp), which is also is powered by a twin-turbocharged 3.0-liter engine.
Share 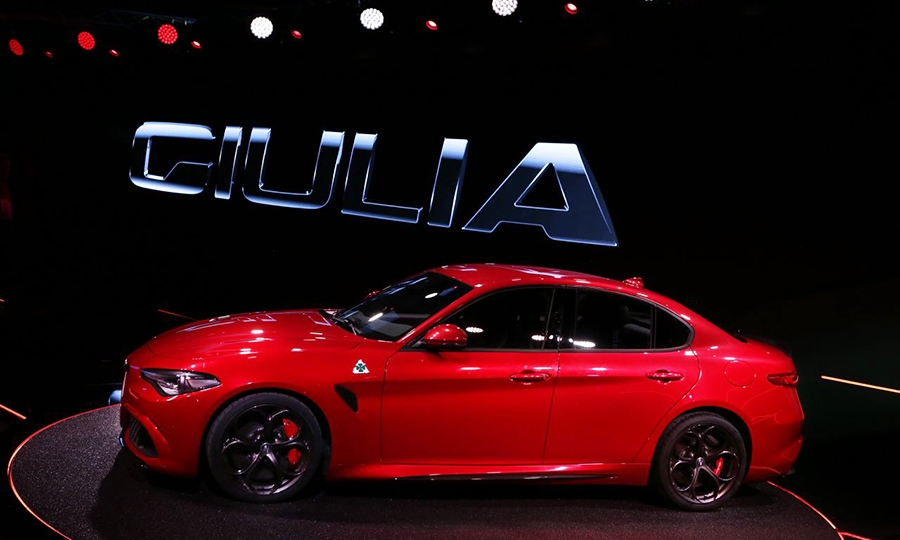 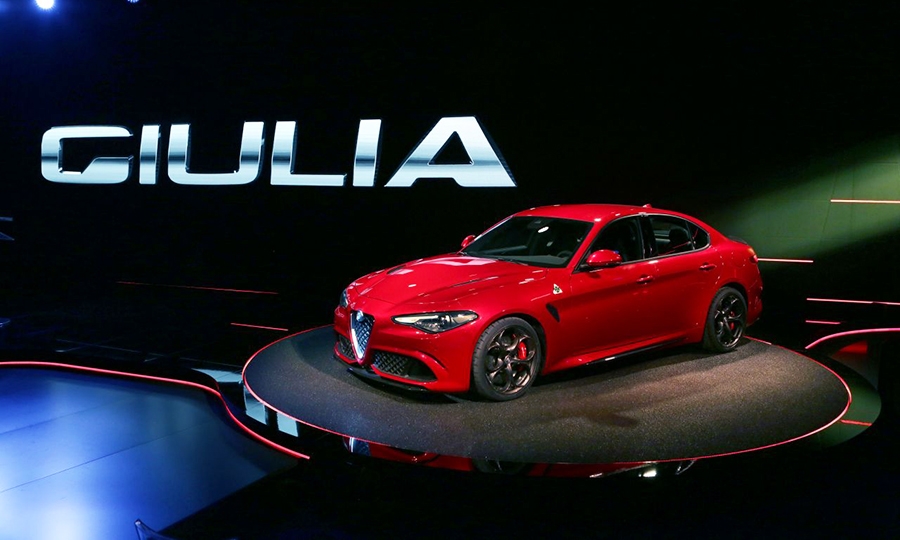 MILAN (Reuters) -- The Alfa Romeo Giulia sedan will be the lynchpin of the Italian sporty brand's turnaround plan and potentially an opportunity to attract a cash-rich merger partner for Fiat Chrysler Automobiles.

CEO Sergio Marchionne is betting on the 105-year-old Alfa brand to help FCA take on German rivals BMW, Audi and Mercedes-Benz in the fast-growing and high-margin market for premium cars.

The midsize Giulia, unveiled today, has a range-topping six-cylinder engine derived from FCA's top-end Ferrari brand and will draw on Alfa's racing heritage to help it stand out against "boring German rivals," supplier sources told Reuters.

But Marchionne faces an uphill battle to convince drivers that Alfa has shed a reputation for poor quality and service, and to persuade investors he has the formula -- and money -- to succeed where previous relaunches have failed.

Some industry observers including Bernstein analyst Max Warburton believe that potential partners are the real audience the company will be targeting with the Alfa relaunch. While the new car will probably "look great and boast huge power and performance ... we think it is still developed on the cheap, far from production ready and unlikely to sell in large quantities," he said.

"It is a high-stakes plan, aimed at building credibility with any potential acquirer of FCA."

The new Giulia and seven models expected to follow, including an SUV, will have to challenge well-established brands which are leaders in innovation and have the backing of financially strong parent companies.

In contrast, FCA is laden with debt, its margins are under pressure in its North American profit center where demand appears to be nearing a peak, and it is also battling a steep downturn in another major market, Brazil.

"It's not impossible but it's a tall order and there is no margin for error," said Giacomo Mori, a managing director at advisory firm AlixPartners in Italy. "Alfa has to offer all the technology and perks that are a given in those German cars and something else."

Perhaps reflecting doubts over his ability to fund his 48-billion-euro ($54 billion) turnaround plan for FCA, Marchionne has recently stepped up a campaign to find a merger partner, and targeted General Motors in particular.

GM, which will be talking up a new Chevrolet lineup at a separate event today, has so far spurned FCA's advances. But a strong Alfa revamp would give FCA more credibility in any future merger talks.

Fiat bought Alfa in 1986. But several attempts at reviving the brand have stalled, leaving just four models. Only around 72,000 Alfas were sold last year. Marchionne is aiming to lift that to 400,000 by 2018, committing 5 billion euros to the brand -- much more than previous turnaround efforts.

Stephanie Brinley, an analyst at forecaster IHS Automotive, said Wednesday's launch alone would not be enough to judge his chances of success. "It will be the full lineup and what they do over the next decade to make it into a truly competitive brand that will be decisive," she said. "It took Audi 10-15 years to come back."

The new Giulia, a rival to the BMW 3 series and Audi A4, will go on sale early next year. It will sit on a rear-wheel platform and shares its name also with a popular predecessor from the 1960s and 1970s.

Critics cite concerns about distribution, especially in the United States, where Alfa has been absent since 1995 but where FCA hopes to sell 150,000 vehicles annually by 2018.

There are doubts too whether FCA has the muscle to compete with its German rivals, which have built up formidable global scale in everything from engines to dealer networks, and are pioneering new technologies such as Internet-connected cars.

Marchionne has said he will "pull the plug" on his plan for Alfa or revisit targets if the first model does not take off. But he is confident of success, having personally tested the new car on the track and repeatedly sent engineers back to the drawing board over the past three years.

"I was a driver of German makes before I came to Fiat. I used to drive a BMW M5 when I was young and foolish ... With the new Alfa we are on par if not better," he said at a recent car show.