At Lexus, the chief still defends that spindle grille 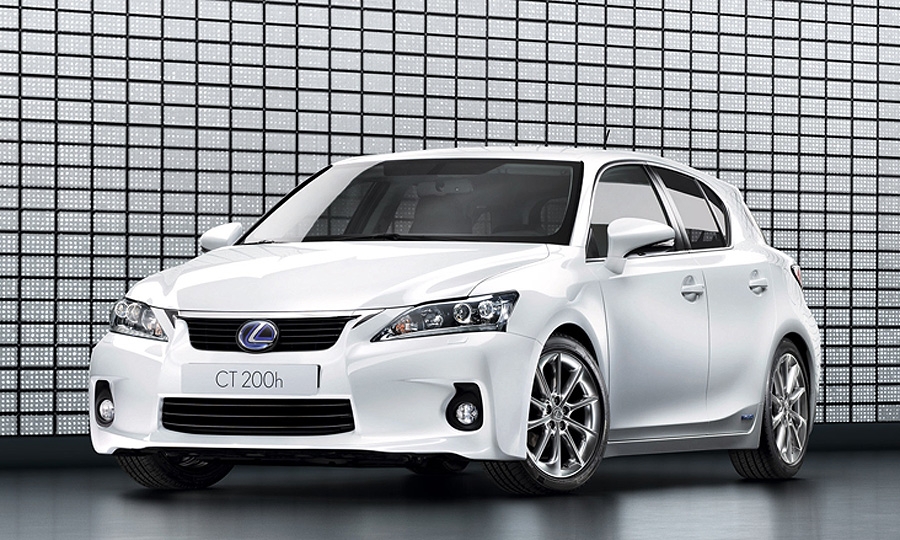 The spindle grille made a quiet, tentative debut on the Lexus CT in 2010 and was later incorporated into the redesigned Lexus GS.
Share 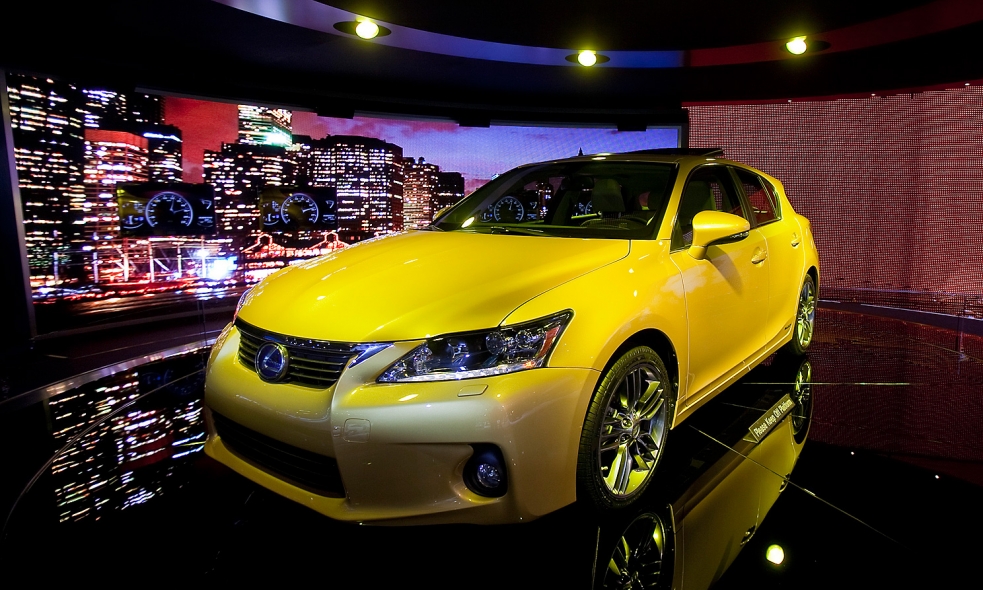 BLOOMBERG
The Lexus CT200h hybrid on display at the North American International Auto Show in Detroit in January 2011.
Share 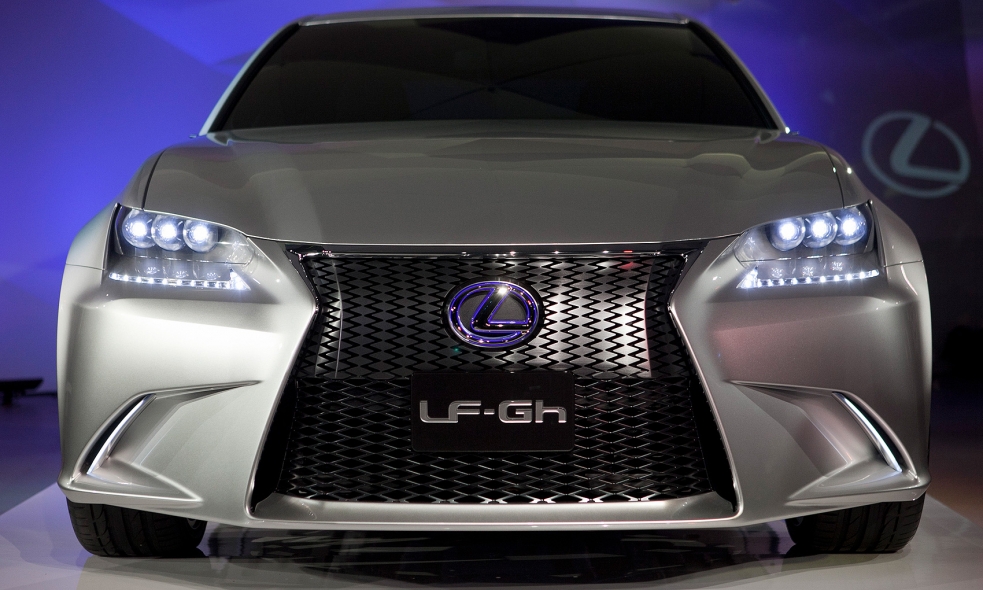 BLOOMBERG
The spindle grille takes on a bold shape with the Lexus LF-Gh concept car at the New York auto show in April 2011.
Share 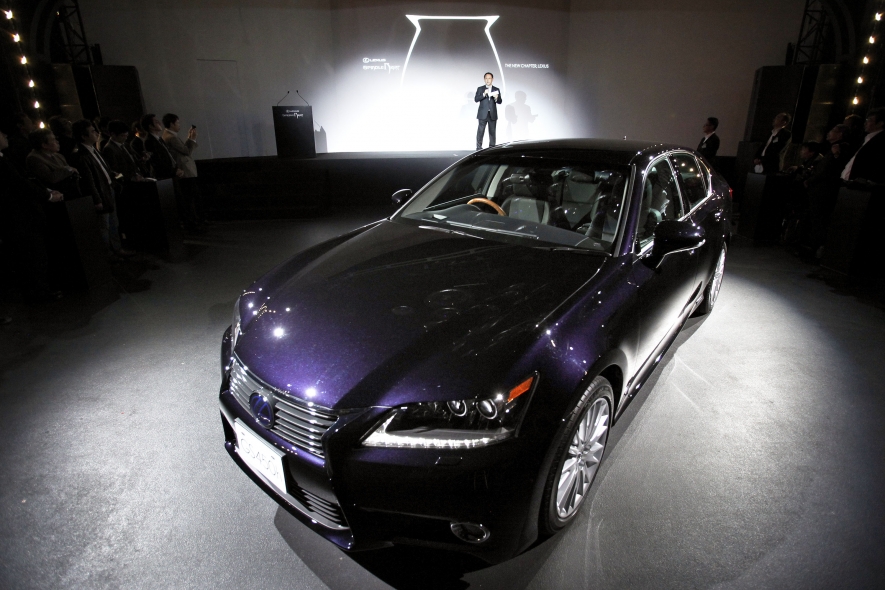 BLOOMBERG
Toyota President Akio Toyoda introduces the Lexus GS 450h hybrid during a preview ahead of the Tokyo Motor Show in Nov. 2011.
Share 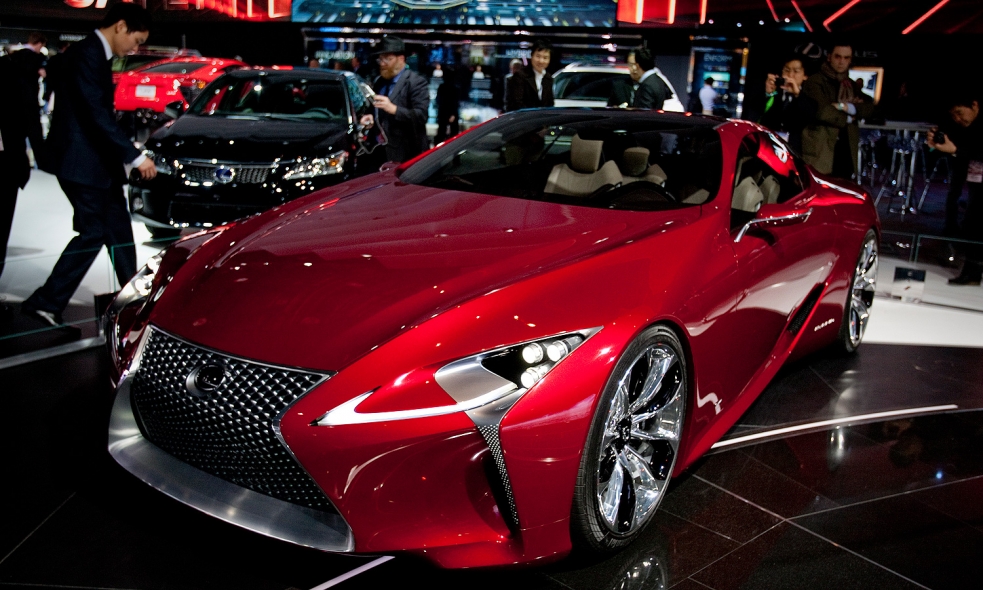 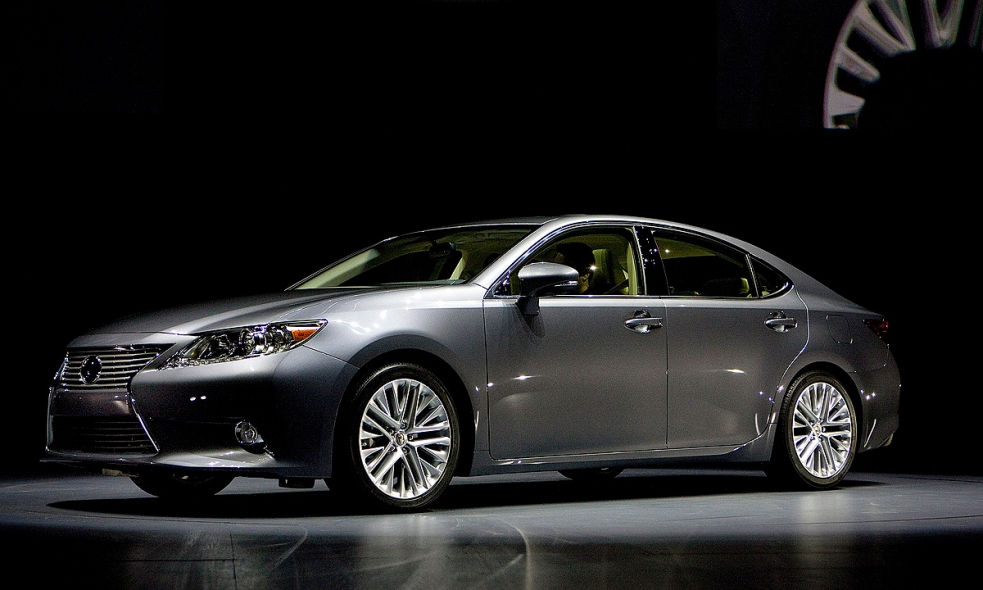 BLOOMBERG
The ES sedan gets the spindle treatment at the 2012 New York auto show.
Share 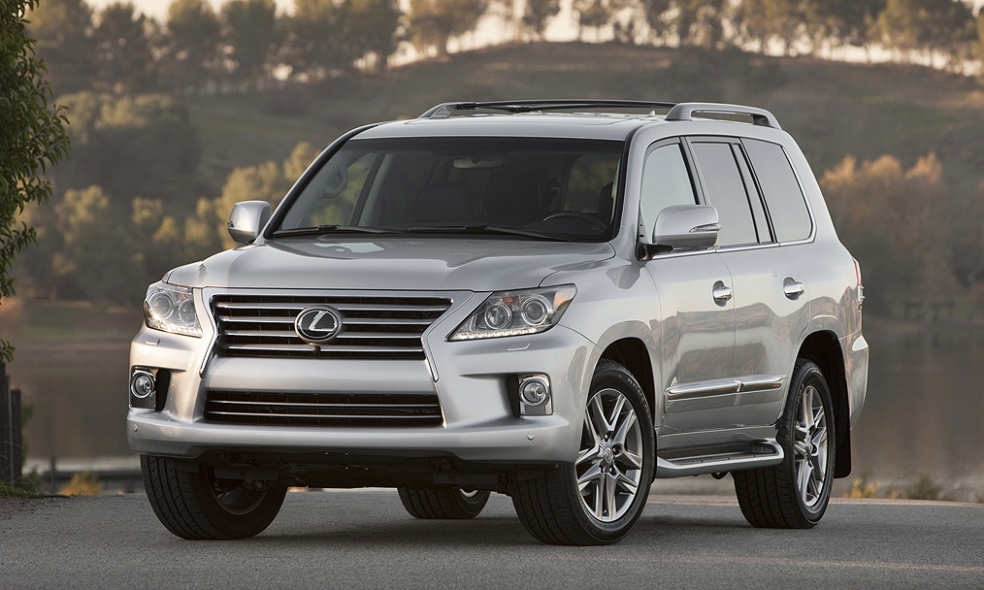 The controversial trapezoidal spindle grille has been a feature on the flagship LX sport-utility vehicle since the 2013 model year.
Share 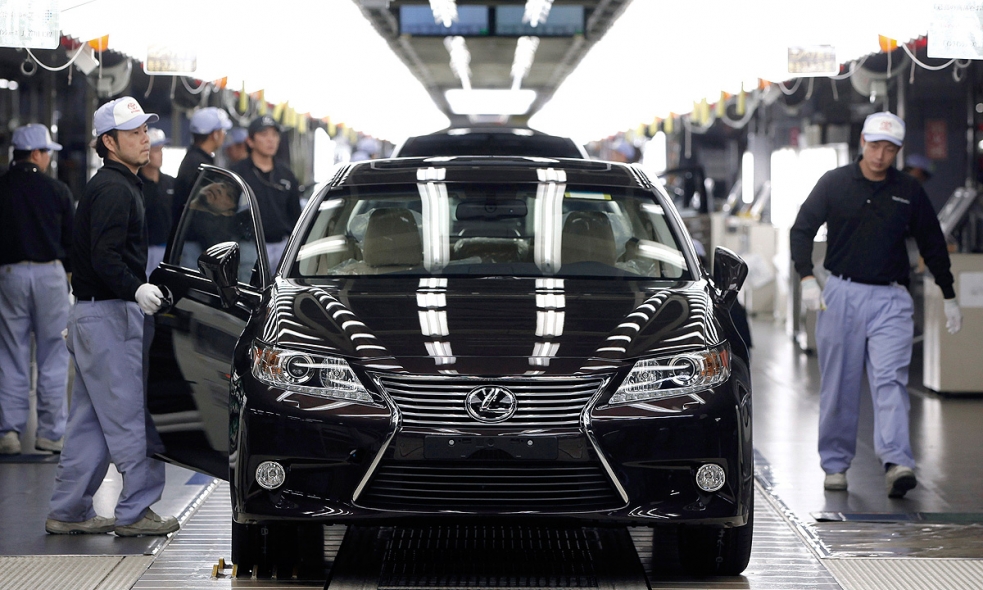 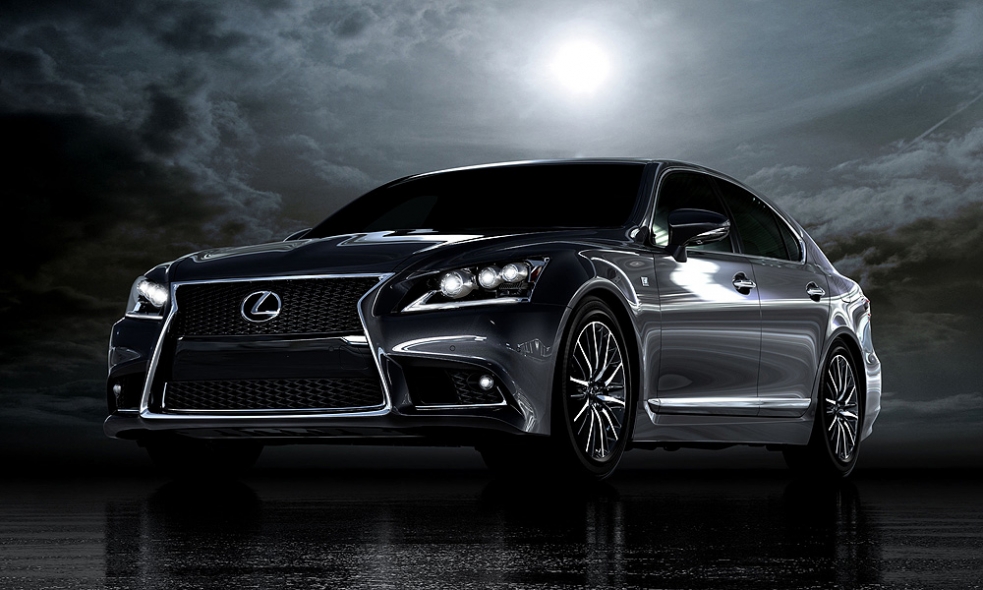 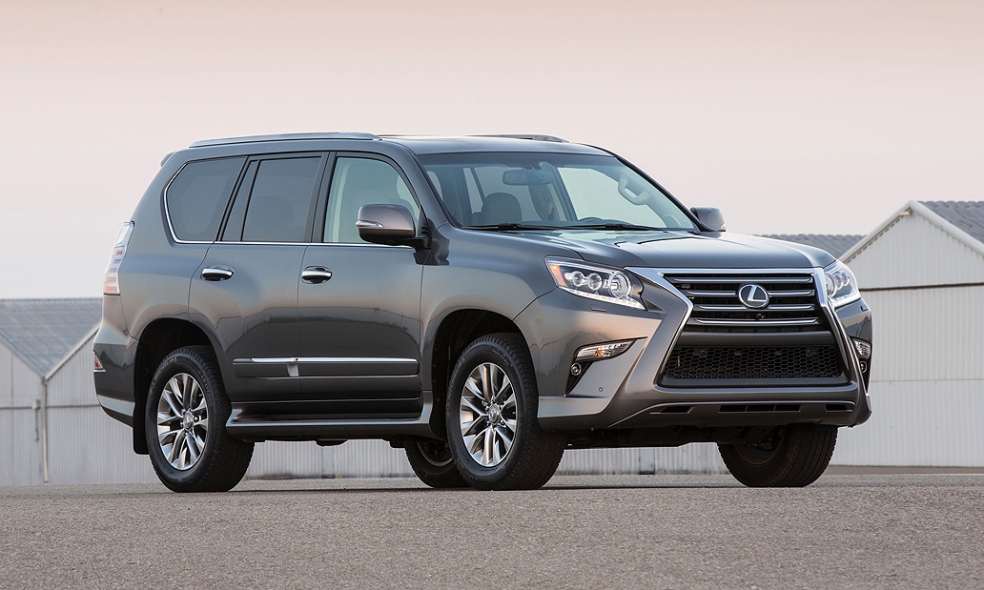 The GX adopted a bold variant of the spindle grille starting with the 2014 model year.
Share 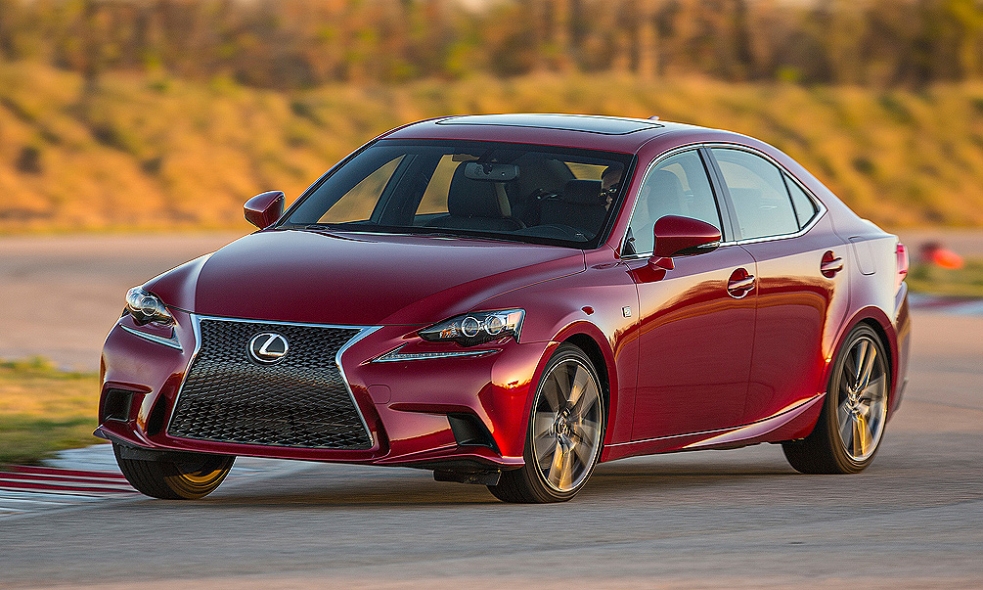 The 2014 Lexus IS sport sedan is test driven at Driveway Austin in Austin, Texas, in March 2013.
Share 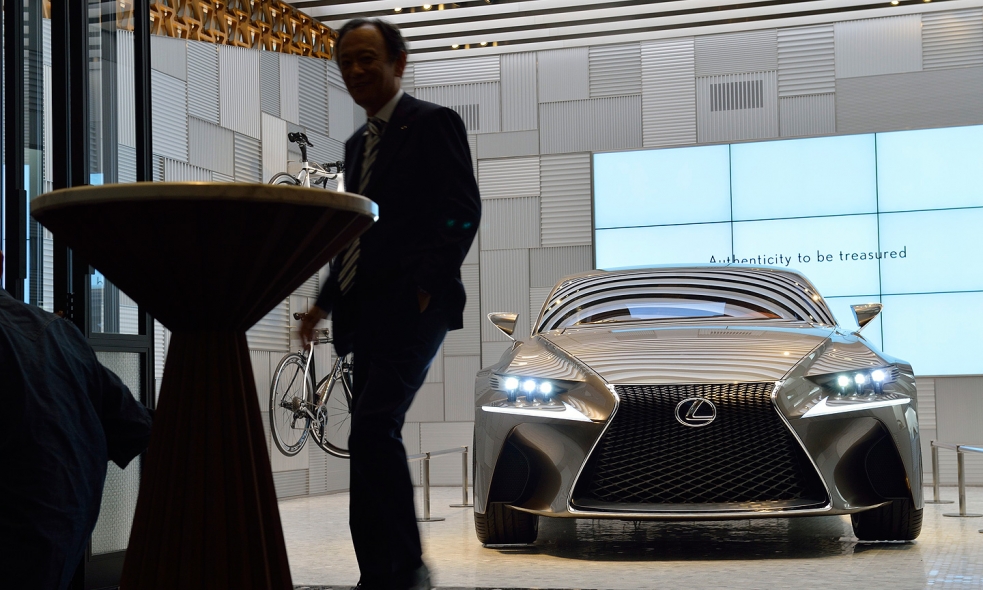 BLOOMBERG
Kiyotaka Ise, president of Lexus operations worldwide, with the LF-CC concept car at the "Intersect by Lexus" luxury brand experience in Tokyo on Aug. 23, 2013. Lexus chose Dubai over China when deciding where to open its new luxury lifestyle boutiques, lured by luxury consumers in the Middle East who are among the youngest in the world.
Share 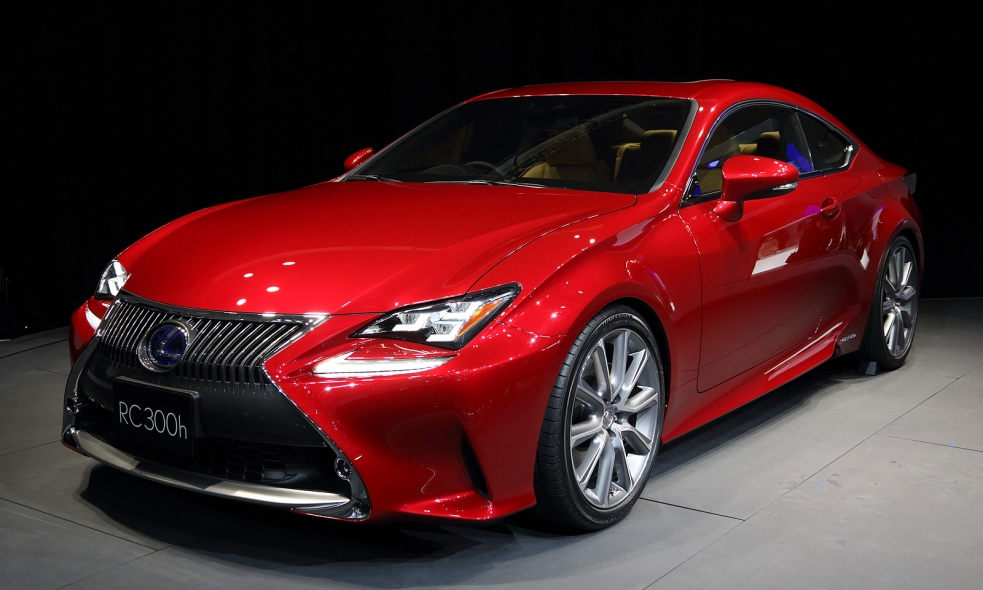 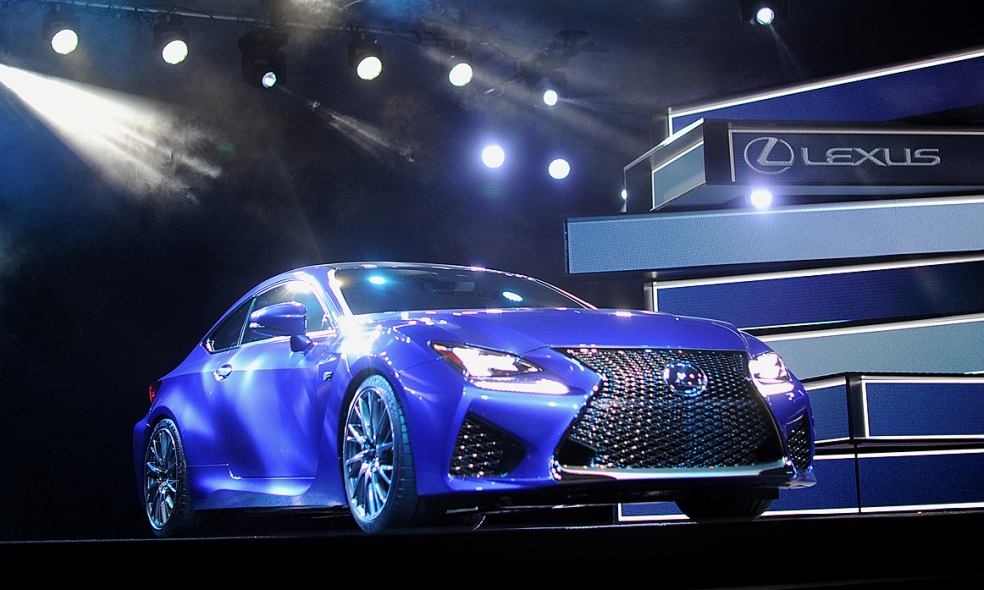 BLOOMBERG
The 2015 Lexus RC sport coupe is unveiled during the North American International Auto Show in Detroit on Jan. 14, 2014.
Share 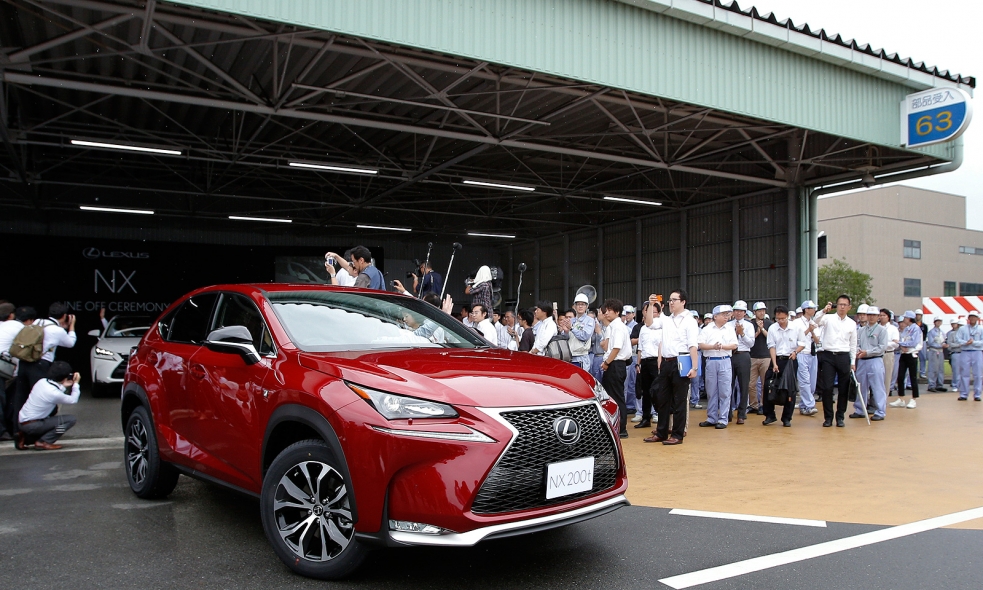 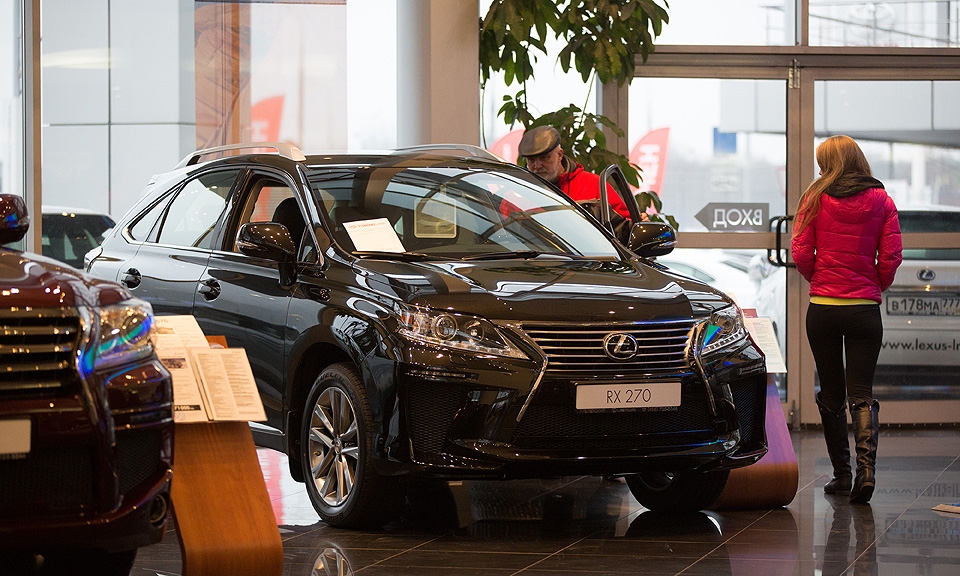 BLOOMBERG
Customers inspect a Lexus RX 270 crossover at a dealership in Moscow on Dec. 16, 2014.
Share 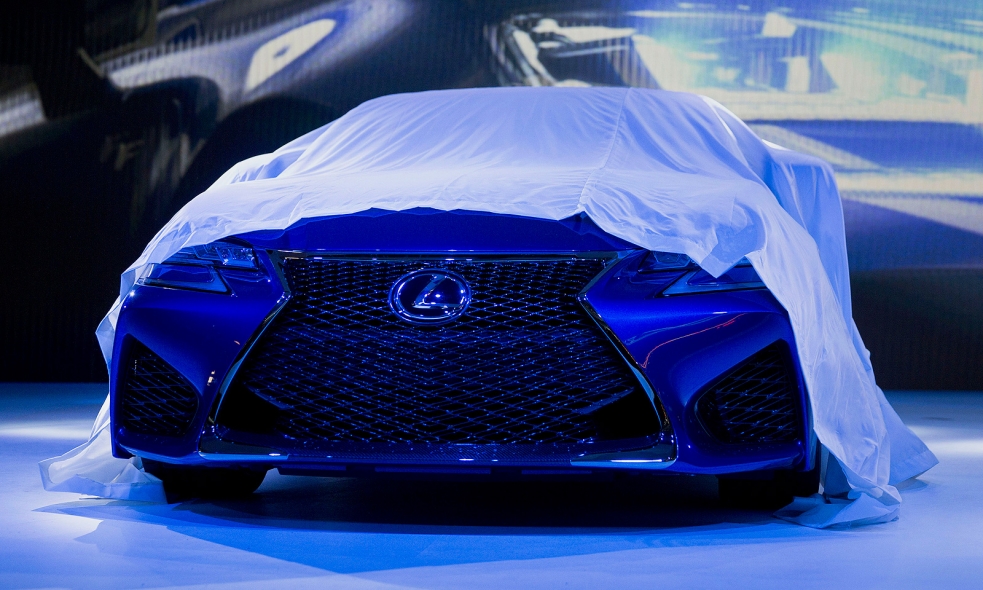 BLOOMBERG
The wraps come off the Lexus GS F during the 2015 North American International Auto Show in Detroit in January.
Share 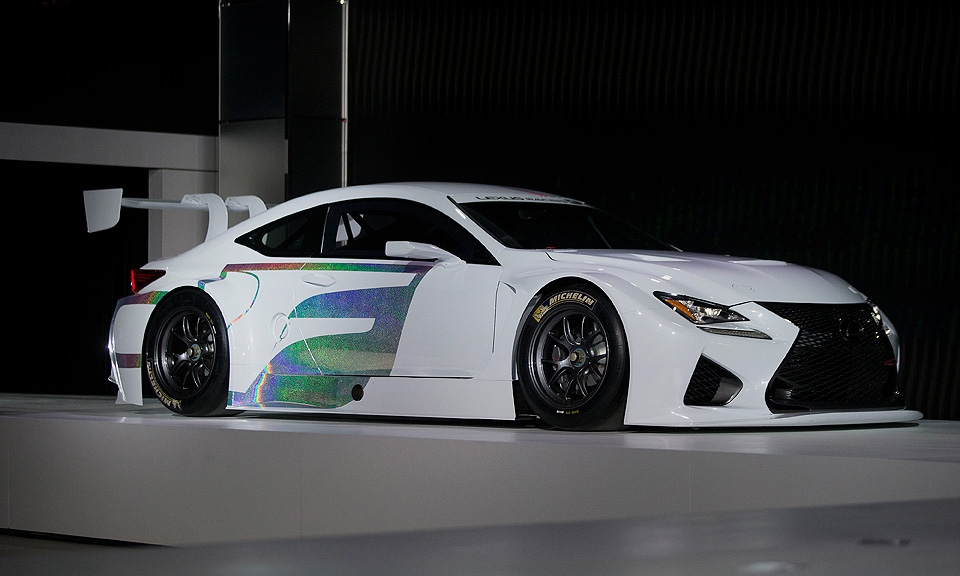 BLOOMBERG
The Lexus RCF GT3 on display during the 2015 North American International Auto Show in Detroit in January.
Share 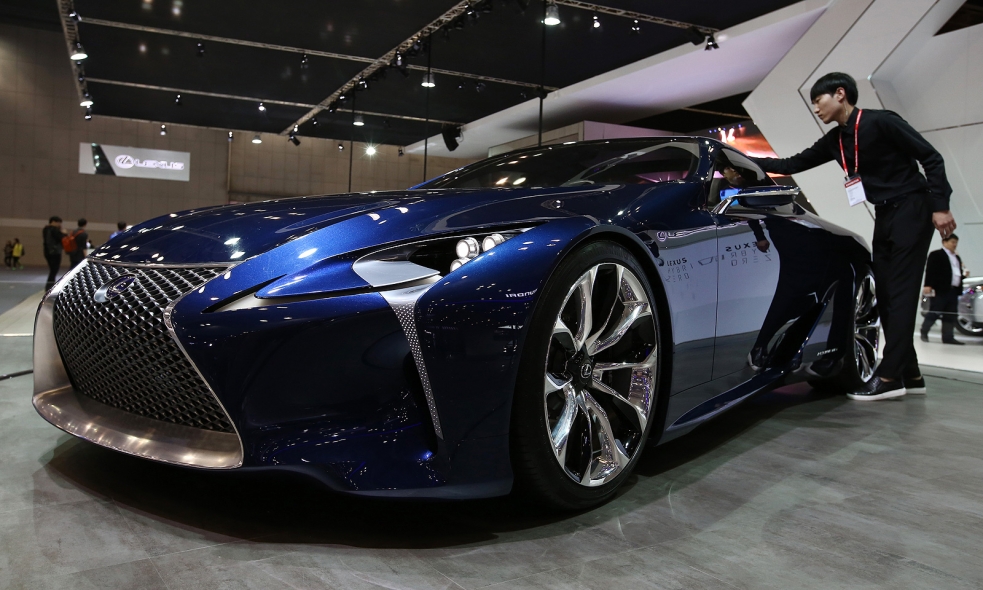 BLOOMBERG
The Lexus RC F Sport on display at the Seoul Motor Show in Goyang, South Korea, on April 2, 2015.
Share 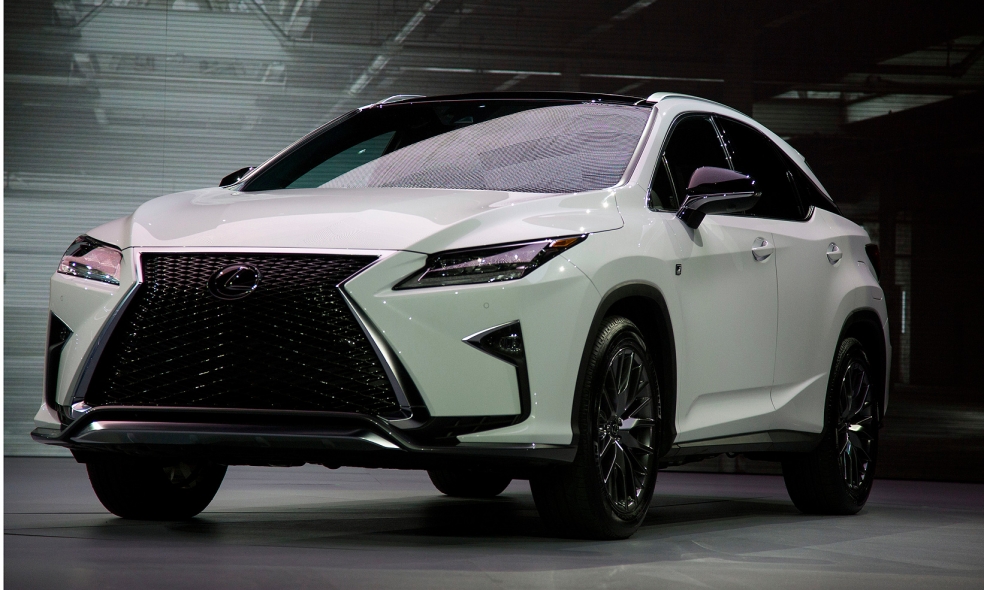 BLOOMBERG
The RX crossover gets an updated spindle grille with a complete makeover for 2016. It was introduced this month at the 2015 New York auto show.
Share 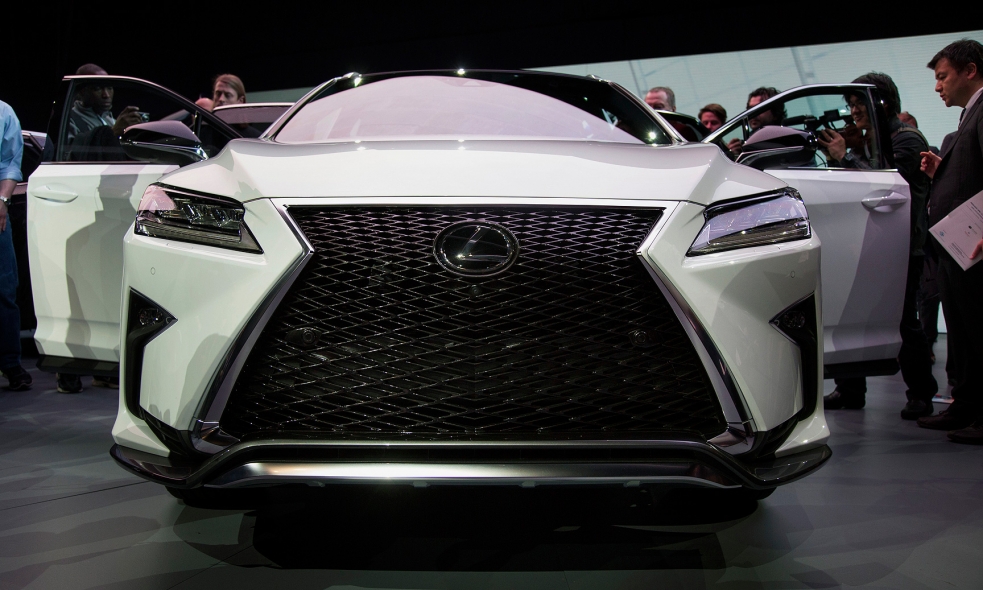 BLOOMBERG
Members of the media inspect the redesigned Lexus RX crossover during the 2015 New York auto show this month. The 2016 RX, the brand's most popular vehicle, features a dramatic version of the spindle grille.

BEIJING -- Big may be beautiful, but Toyota Motor Corp.'s global design chief is betting that edgy is the way to go for the Japanese automaker's premium Lexus brand, specifically its signature 'spindle grille' design.

Tokuo Fukuichi, who is also the global chief of Lexus, says the design shock-therapy gives the brand -- and conservative Toyota more broadly -- the stand-out face it previously lacked.

While some industry rivals and design experts say the jagged-edged, trapezoid grille is downright ugly, 63-year-old Fukuichi stands by the drastic makeover, saying it will give Lexus a "unique" edge over German rivals BMW, Audi and Mercedes-Benz, particularly in competitive emerging markets such as China, where Lexus sales trail by a wide margin, and buyers will pay more for a car that stands out from the crowd.

Fukuichi, who was brought back to Toyota from a subsidiary in 2011 and as he was recovering from cancer, says Toyota for too long designed cars by committee -- often of several dozen people.

"The upshot was styling conservatism which everybody tolerated, but nobody was passionately in love with. We tried to please 10 out of 10 people. Now we're trying to please one of 10 people out there with Lexus.

"When CEO Akio Toyoda asked me to come back, he told me he wanted to make our cars cool. That meant he thought our cars weren't sexy," Fukuichi added, explaining his introduction back then of the head-turning grille.

In an interview ahead of the Shanghai auto show, Fukuichi said Lexus was still not at "a gold medal winning level on the global stage," versus leading German brands and the likes of Jaguar, Maserati and Aston Martin.

The Lexus NX 200 during a presentation at the Moscow International Auto Salon in August 2014. An angry Toyota shareholder once complained the new face of Lexus was giving the brand a bad reputation.

Fukuichi is no stranger to controversy. In the late 1980s, he caused a storm with Toyota's first-generation Previa multi-purpose vehicle, which was dubbed the 'egg van' because of its quirky rounded styling.

"Even polarizing designs, you get used to them after a while," he says.

The designer's credo is to take a risk to stand out from the competition -- like a movie star playing on what others consider a flaw in his looks in an industry where the generic drop-dead fashion model doesn't linger long in the memory.

For Lexus, that flawed look is the spindle grille, which made its quiet, tentative debut in the Lexus CT in 2010 and was later incorporated into the redesigned Lexus GS.

It upset more than a few. At a mid-2012 shareholders' meeting, one angry Toyota shareholder complained the new Lexus "face" was giving the brand a bad reputation. Even some Lexus insiders likened the new look to an ugly deep-sea creature.

The Lexus LF- CC concept on display at the Busan International Motor Show in South Korea in May 2014. A former Rolls Royce designer once said the pinched-in-the-middle spindle grille was a "design no-no" as it created an "uncomfortable" tension in the lines and shape of Lexus cars.

Others outside joined in the criticism. A former Rolls Royce designer said the pinched-in-the-middle spindle grille was a "design no-no" as it created an "uncomfortable" tension in the lines and shape of the car. A U.S. design professor said the controversial grille looked like the mouth of the Predator, an alien sci-fi movie character.

But the radical look had its fans, too. A senior Nissan Motor Corp. designer said the company's Infiniti premium brand quietly dropped plans to adopt a similar spindle grille profile because Lexus beat them to it.

And the opinion that really counts -- at showrooms -- appears positive. Lexus' global sales have grown 42 percent since 2010 to 583,000 vehicles last year.

"I had nothing to lose except my life," he said. "I was ready to quit any time and retire if it didn't work."

The evolving face of Lexus