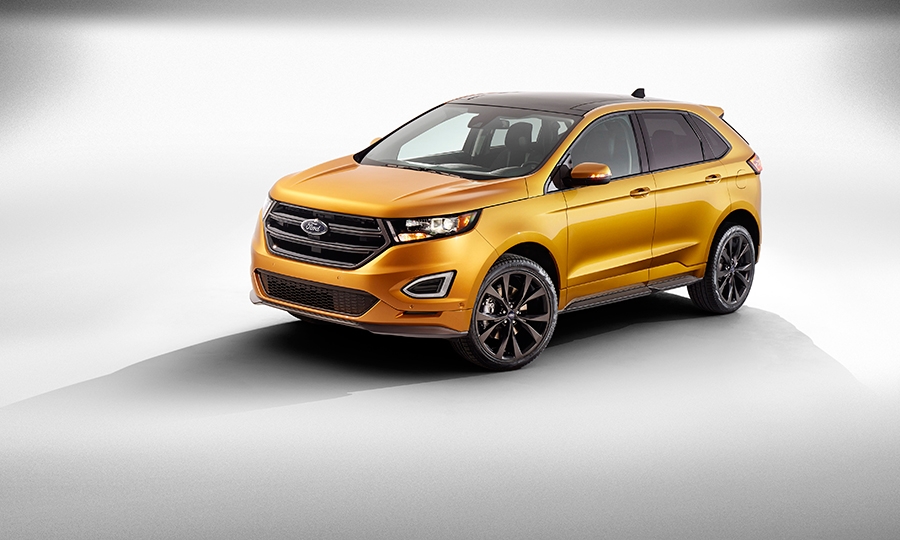 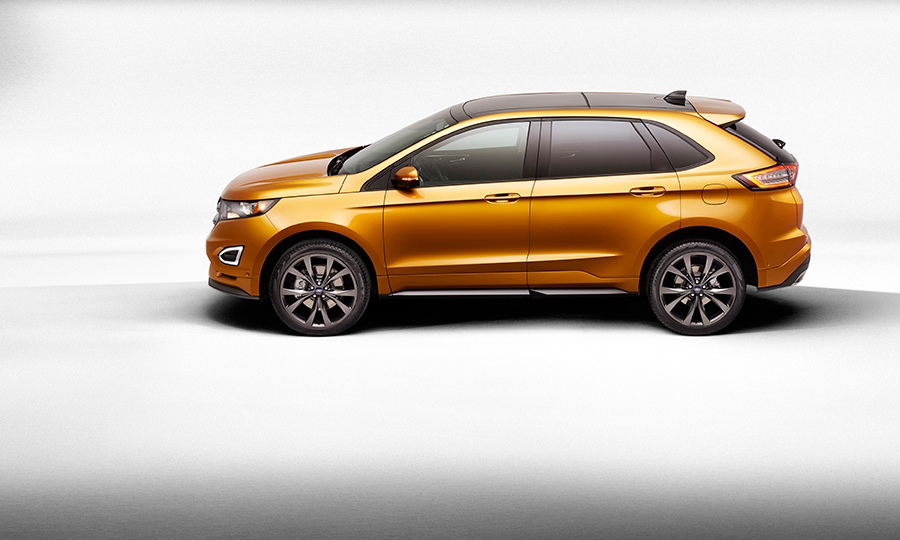 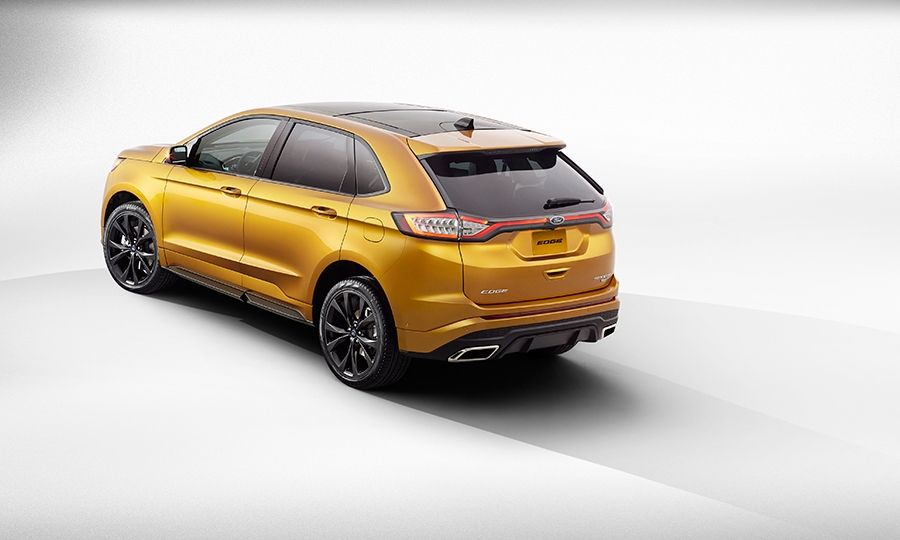 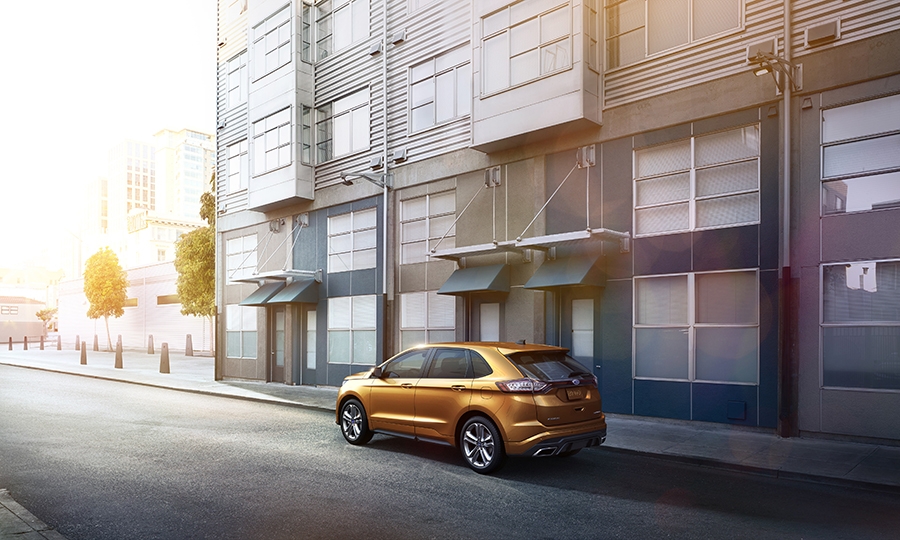 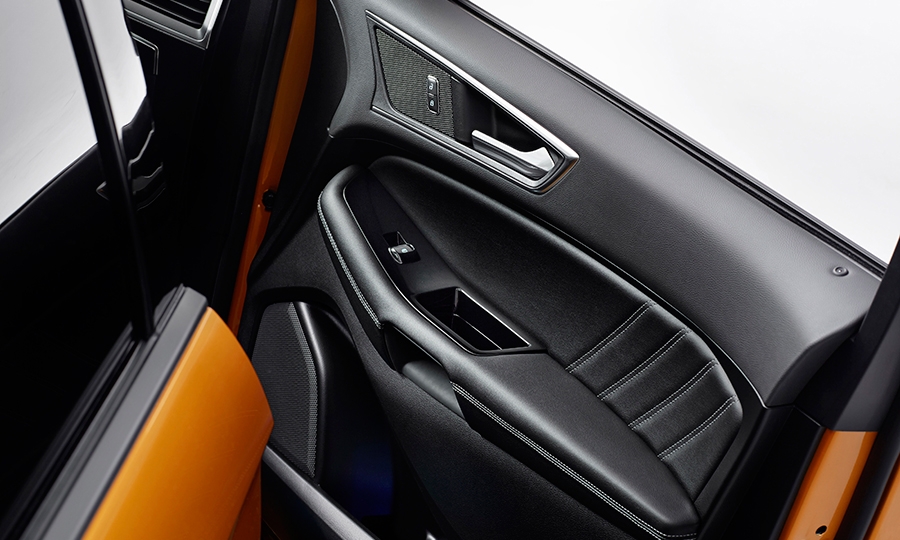 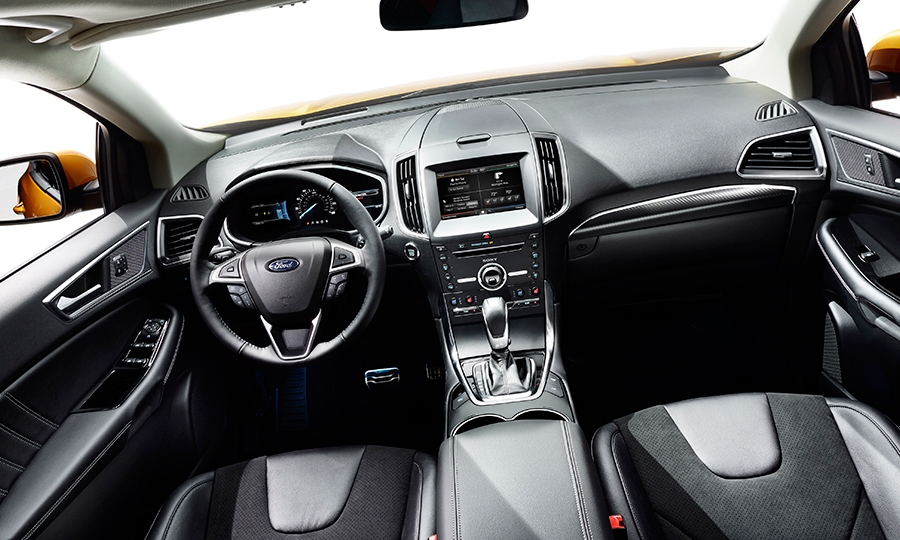 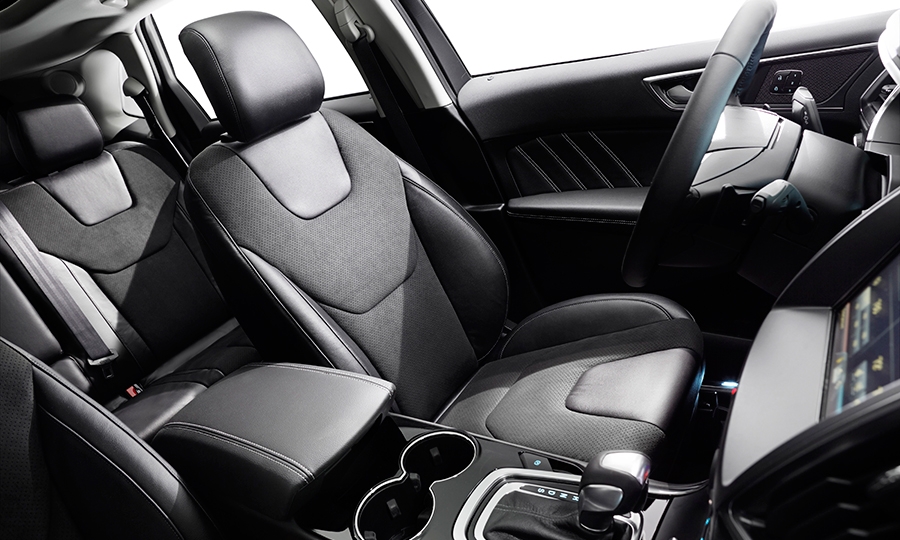 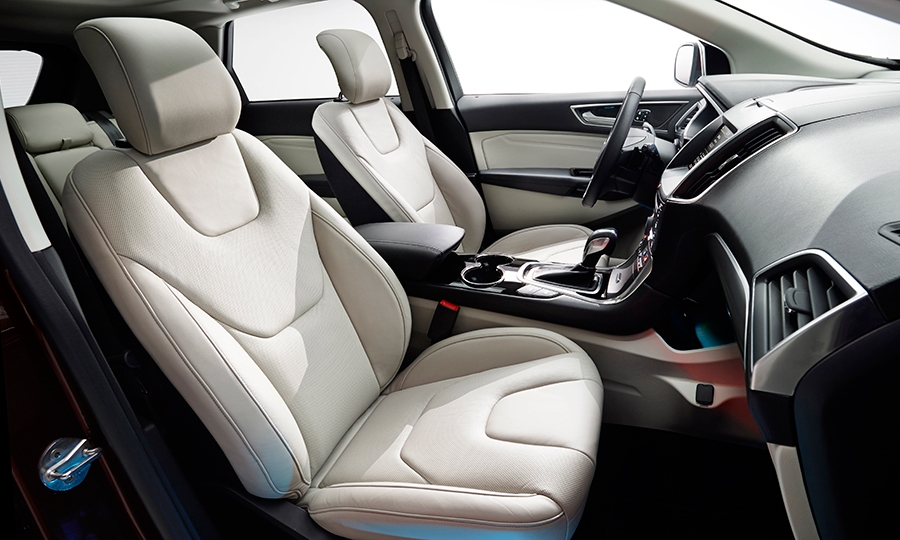 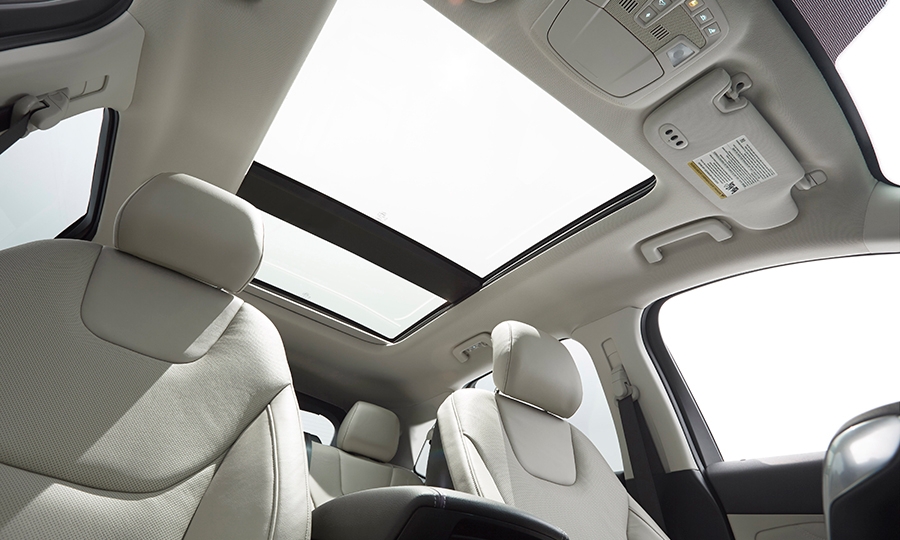 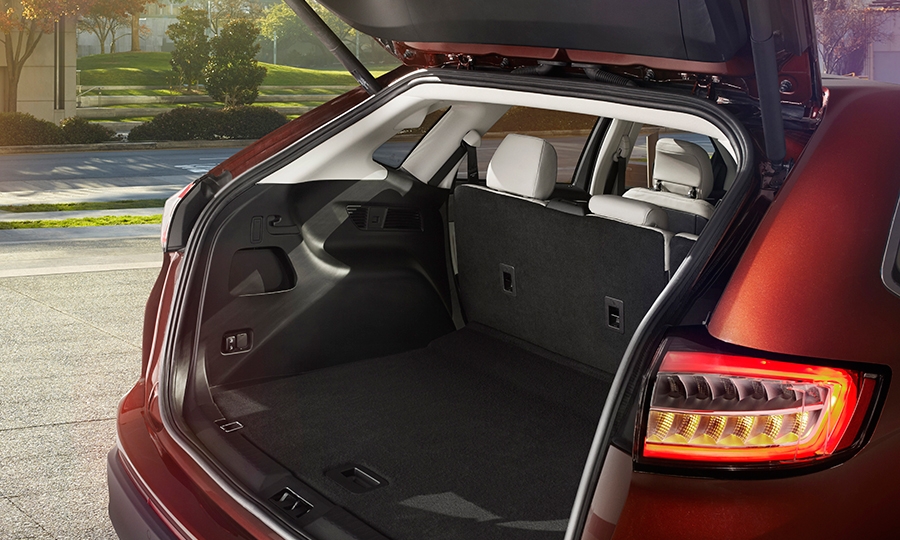 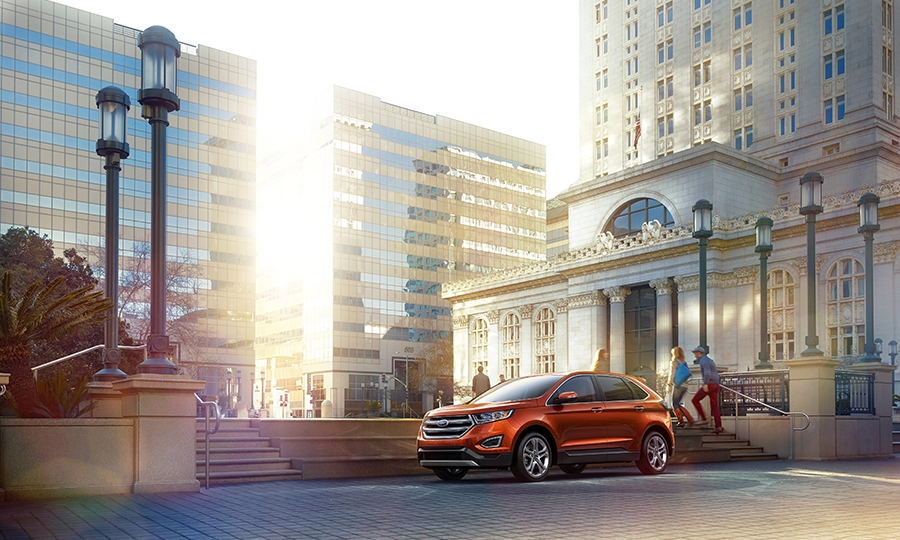 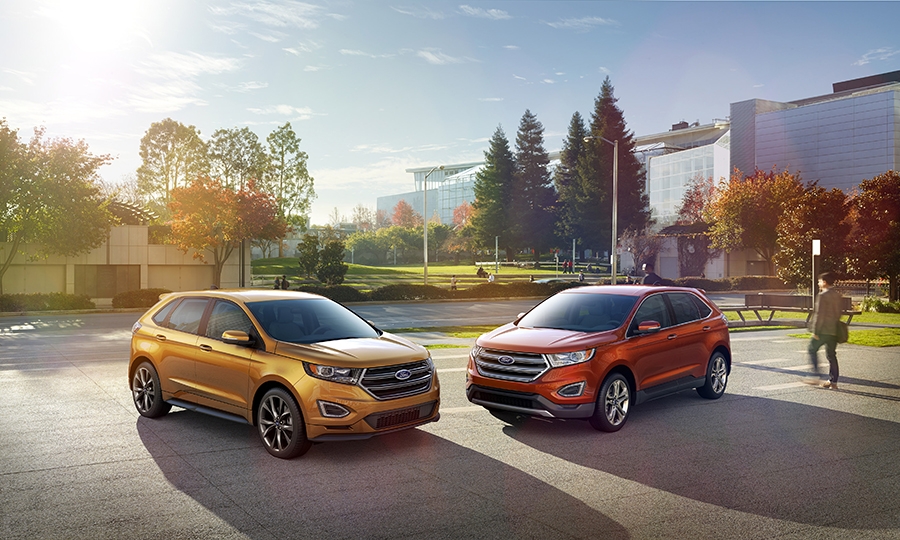 DETROIT -- The Ford Edge, introduced in 2006 as an early entrant in the now-booming mid-sized crossover segment, is getting a major makeover and global push for 2015. Initially, the Edge was primarily a North American vehicle. For 2015, the Edge will be sold in more than 100 markets.

It will appear in dealerships early next year.

The new vehicle, shown to journalists Tuesday, is longer, roomier, more powerful and more aerodynamic than its predecessor.

Ford is touting the Edge as a showcase for its latest technologies. It will be the first Ford-branded vehicle offered with an adaptive steering system, a 180-degree front camera, an enhanced self-parking assist system that works for vertical and parallel parking, and a glovebox airbag.

It will also be the first Ford to get a redesigned 2.0-liter EcoBoost engine with a twin-scroll turbocharger that optimizes camshaft design for reduced turbo lag and improved engine performance. It will be available in front- and all-wheel drive configurations.

The new 2.0 EcoBoost is one of three engines offered. The others are a conventionally aspirated 3.5-liter Ti-VCT V-6 and a 2.7-liter EcoBoost V-6.

Though the current Edge has been sold in some Latin American markets, its reach will expand dramatically with the new model. For the first time, the Edge will be exported from Ford’s Oakville, Ontario, plant to such markets as China and Europe. The Edge will go on sale in Europe in late 2015. Ford officials declined to say when it would go on sale in China.

As part of the global rollout, the Edge will be made for the first time in right-hand drive versions.

Ford will sell different variants of the Edge in those markets. For example, European customers will be offered only two diesel-engine versions, while no diesels will be offered in the United States.

Customers in Europe and China -- where Ford expects the Edge to compete with luxury brands such as BMW, Audi and Mercedes-Benz -- will get a more sophisticated digital dashboard than North American customers.

The Edge is based on Ford’s global CD platform, the same architecture that spawned the Fusion mid-size sedan.

Ford has redesigned the Edge with a body that is 26 percent stiffer when reacting to bending forces and 16 percent stiffer in reaction to twisting forces. The suspension retains MacPherson struts in front and has a new integral-link independent rear suspension with coil springs. Ford engineers say the new Edge has to perform on Europe’s often-narrow, twisty roads. It will also have to hold its own on the German autobahn for the first time.

Moray Callum, Ford’s global design chief, said the second generation Edge was designed to have a sleeker, more athletic look than its predecessor.

“It’s Edge the runner, as opposed to Edge the boxer,” said Callum. “It has a sharp nose, airy cabin, a shortened hood” and has “purpose and proportions.”

Ford officials say they’re not concerned that the Edge will cannibalize customers from the Explorer large crossover or the Escape compact crossover, which bracket it in Ford’s lineup.

“Explorer customers like to share their adventures with their friends and families,” which the third row, seven-seat configuration enables, said Jim Farley, Ford group vice president of global marketing, sales, service and Lincoln. The Edge has five seats. “The Edge is a personal product. They [customers] buy for themselves, not their family.”

Farley said Edge customers stretch their budgets to purchase an Edge -- parting with 40 percent of their annual income to buy the vehicle, 10 points higher than they would for a Fusion, he said.

With the new features and design, the Edge is moving upscale. For the first time, the Edge will be offered in Ford’s top Titanium trim level. The new adaptive steering feature, which changes the steering ratio depending upon how fast the vehicle is moving, will be standard on the Titanium.

Despite the ambitious global plan, Ford officials say they have no plans to build the Edge anywhere but Oakville. Farley said Ford expects China to be the biggest crossover/utility market in the world by 2018. Ford already sells the current version of the Edge in China. Ford grew from having a 1 percent share of China’s crossover market to 4.5 percent from 2012 to 2013, Farley said.

“We sell every Edge we can ship to China -- every one. If we could make more, we could sell more. This all new Edge will amplify everything Chinese customers love about the Edge.”

Ford has said repeatedly that utilities, its term for crossovers, are the fastest-growing segment in the world.

Ford has not announced prices for the 2015 Edge.

Bentley changing its ways with EVs