How Ford's pony car survived a brush with death 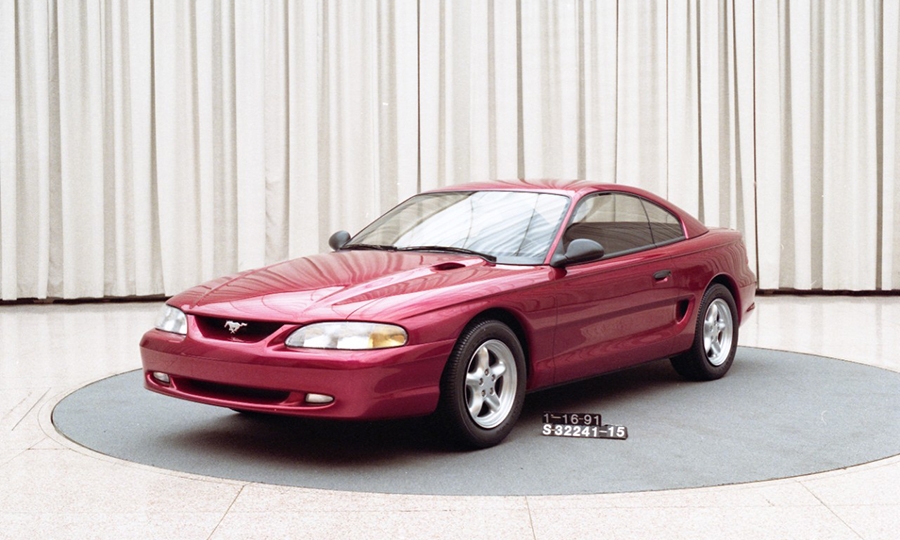 A production-intent version of the fwd Mustang that later became the Ford Probe.
Share 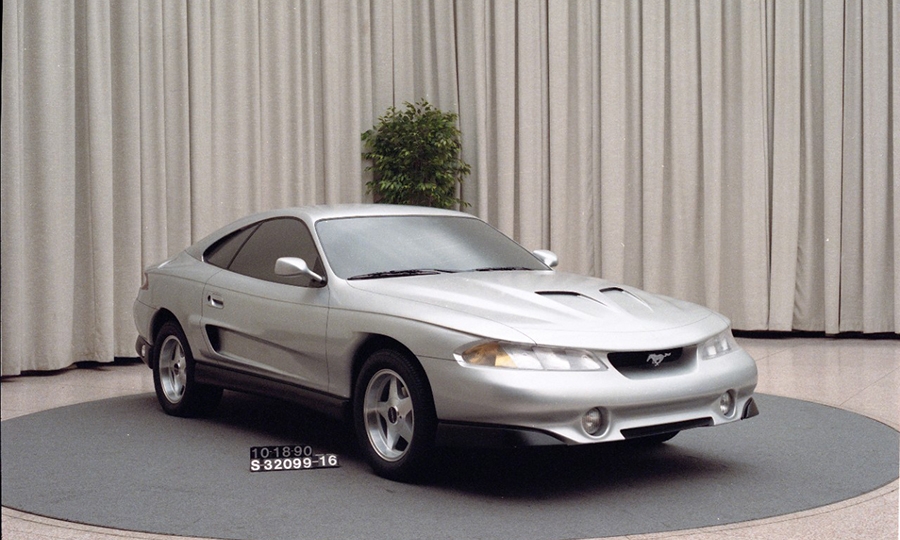 The Mustang design team had three designs to choose from: a conservative design named Bruce Jenner, an aggressive one dubbed Rambo, pictured above, and an in-between design called Schwarzenegger.
Share 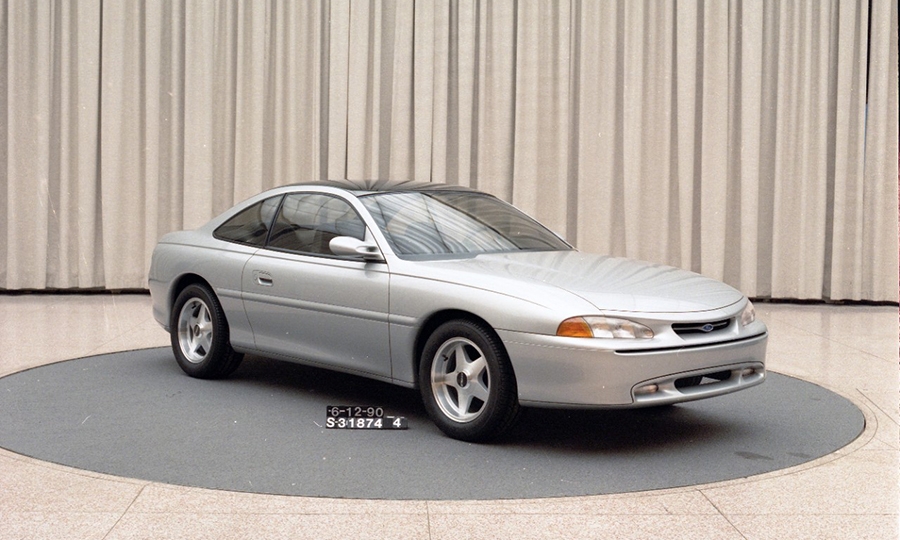 A combination of the Rambo and Schwarzenegger designs.
Share 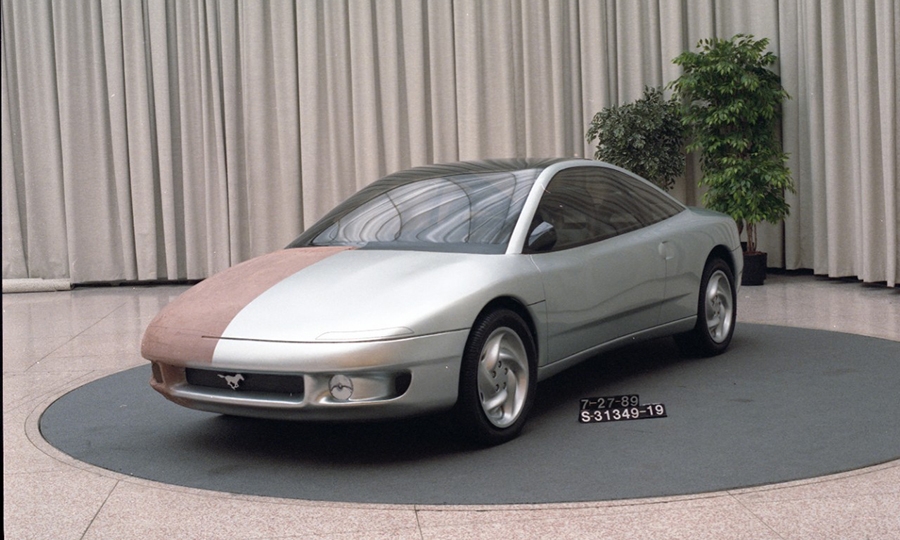 The one full-sized clay model of the fwd Mustang concept.
Share 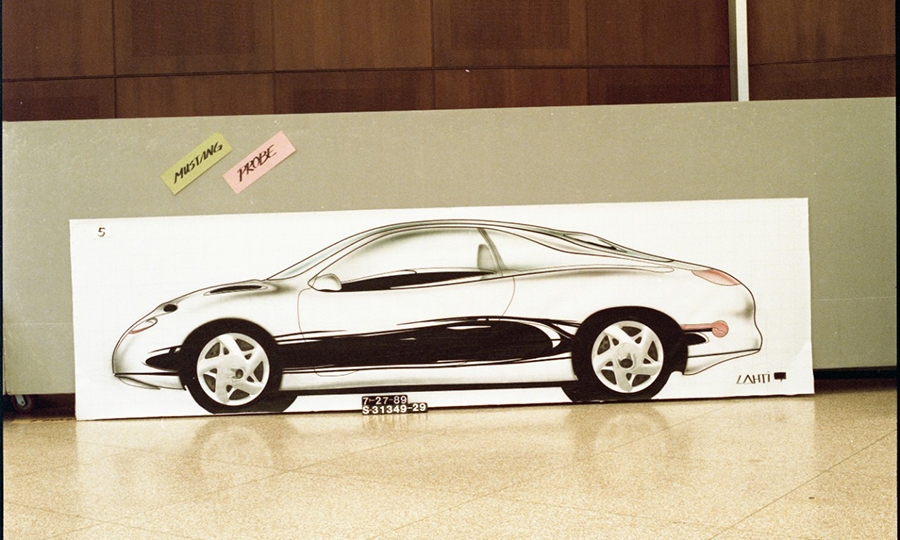 A sketch of the Mazda-based Mustang concept. Notice the two labels above the sketch: 'Mustang' and 'Probe.'
Share 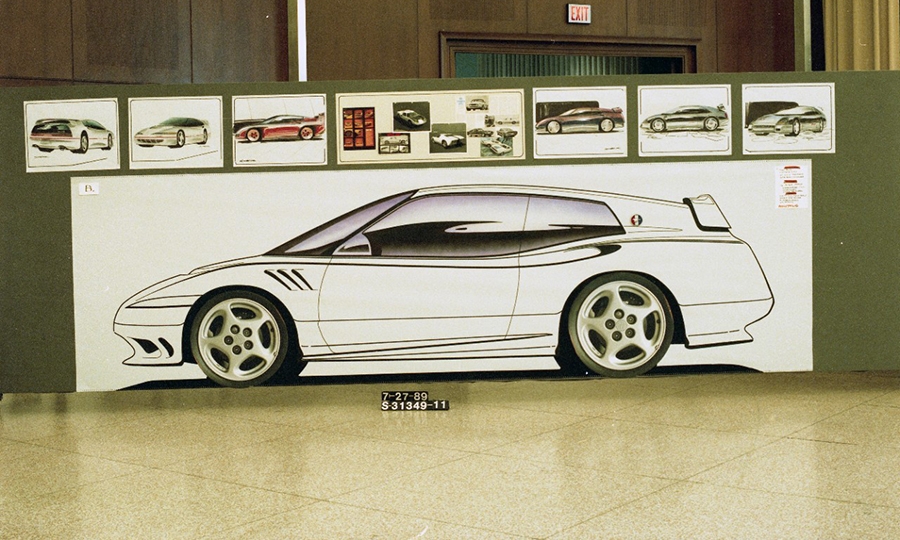 A shooting-brake rendition of the Mustang. Ford considered the wagon-like design to compete with cars like the Volkswagen Golf GTI.
Share 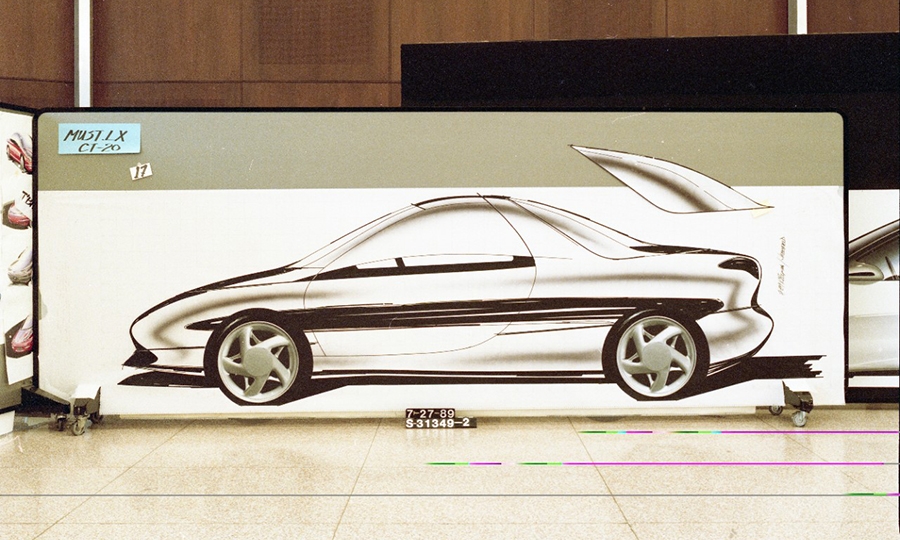 This sketch shows a removable back panel to increase rear-seat space.
Share 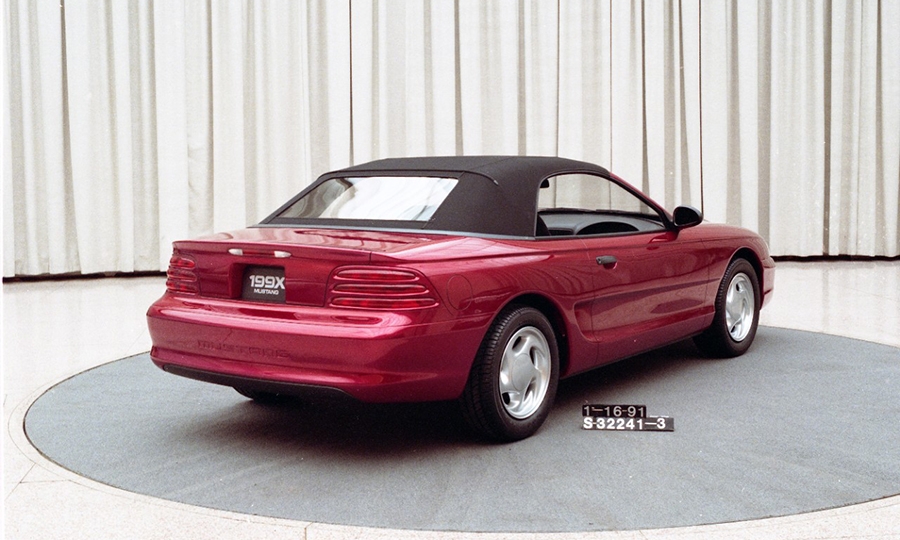 The Schwarzenegger themed design emerged victorious in October 1990. Shortly after, the SN-95 program became official with a $700 million budget, $200 million over the original target -- the only goal the group failed to hit.

The April 13, 1987, issue of AutoWeek magazine featured a shocking cover story that created an outcry among Mustang fans. In the exclusive report, Christopher Sawyer revealed Ford's plans to build the 1989 Mustang on a Mazda front-wheel-drive platform.

"Ford is on the verge of taking up with a Japanese-American filly as it prepares --eventually -- to kill off its all-American pony car," he wrote.

The cover showed a wedgy-looking fastback car with a sloping front end, pop-up headlights and a narrow slit in place of a grille.

AutoWeek dubbed it the "Maz-stang." Mustang lovers deluged Ford with thousands of letters of protest.

"Lower the flag to half staff boys, we've lost a great patriot," reader Tom Bond of Clarion, Pa., wrote to AutoWeek. "Tell Dearborn I cancelled my Mustang GT and ordered an IROC-Z."

Dave Stein of Williamsville, N.Y., wrote that Ford's decision filled him with "rage and disgust." He urged readers to write "the bastards" and printed the company's Dearborn address. Another reader called the car a "Mazdechtomy."

The story of how the 1989 Mustang nearly became a fwd, Japanese-designed car is the Mustang's closest brush with death in its 50-year history.

The howls of protest eventually prompted Ford to reverse course. The Mazda-designed Mustang, code-named ST-16, would become the Ford Probe and join the Mustang in Ford showrooms.

And, as a recession loomed, the cash-strapped company took a deep breath and put the fate of its cherished rear-wheel-drive pony car in the hands of Mustang loyalists within its own ranks who were willing to toil after hours.

The proposed Mazda-based Mustang was about more than cowl heights, hood bulges and rear deck proportions.

Global changes were affecting all automakers during the 1980s. The Arab oil embargoes of 1967 and 1973 and the Iran oil crisis of 1979 forced the United States to rethink its dependence on foreign oil. In 1975, the first corporate average fuel economy regulations aimed to reduce fuel consumption ushered in a seismic shift from rwd cars to more efficient fwd.

U.S. automakers, which had specialized in big, rwd cars, were caught off balance.

Recalls Neil Ressler, then chief engineer of small car design at Ford: "This idea came forth that we would replace the Mustang with this front-drive car, the ST-16. There were a lot of people who thought that was a great idea -- a modern car. There were also a lot of us who were appalled by that. It was like the champagne sipping crowd replaced the beer drinking crowd.

"The idea that we would replace the Mustang with a Japanese car -- a different car from a different culture aimed at a different audience -- this is not going to work."

Ressler counted himself among the beer drinking, rwd contingent, but he could understand the logic of the champagne crowd.

"It was really polarizing within the company," he recalls. "In a way it seemed like we were the defenders of the past trying to resist the forces of modernity."

But the move to modernity seemed inevitable. A 1988 study by Ford's small-car manager, Ken Dabrowski, found that developing a new rwd platform would be too expensive, meaning the old Mustang based on the Fox platform would be phased out under the name Mustang Classic while the new Mazda-based Mustang was phased in.

But the angry customer uprising pushed management to change course. Alex Trotman, newly appointed executive vice president in charge of Ford in North America, gave the traditionalists a chance to take a "fresh eyes" look at the Mustang even while Ford went ahead with the Mazda-based car that would be renamed Probe.

"Until he arrived, the weighted average of executive opinion would have been on the side of discontinuing the rear-drive Mustang and going with front drive," says Bob Rewey, who was then group vice president of North American sales, marketing and customer service. Through the 1980s, sales of the Fox-platform Mustang had been falling. And fwd was becoming the dominant layout.

In August 1989, Dabrowski chose John Coletti, Ford's feisty small car design engineering manager, to form a team to save the Mustang. Coletti was passionate about the Mustang.

Everything was wrong about the ST-16, in Coletti's view, starting with the short hood and the sloping front end.

"If you push the cowl down, that means the hood line is down, and that means nothing big is under the hood," he says.

When Dabrowski asked Coletti to form the team, Coletti said it felt like a dream come true.

"He says, 'All right wise guy, we want you to put together a proposition for a new Mustang.' The dilemma facing Ford engineers was simple: The car they knew they wanted, they couldn't afford. And the car they could do, the ST-16, nobody liked."

Coletti's team began meeting after hours in his office. They soon gave Trotman a proposal that outlined a series of objectives: The car needed new interior and exterior styling to preserve classic Mustang design cues including the long hood and short rear deck. It had to be rwd with a powerful V-8 option, conform to the latest government environmental and safety regulations, improve quality 50 percent and come in at $500 million or less.

An all-new Mustang program would have cost about $1 billion.

Ford's gang of eight, as the team was known, worked to keep some of the hardware from the existing Mustang, which had been based on the Fox platform since 1979. But the team strengthened the chassis and body structure, which had contributed to quality and handling problems.

Coletti's group needed supporters among Ford's top management. "The guy who was our guardian angel through this whole thing was a gentleman called Bob Rewey," Coletti says. "He believed in us and championed our cause. He understood the magic of the Mustang."

Rewey had a good relationship with Trotman and helped the Scotsman with North American product insight. Rewey credits Trotman, who later became Ford's CEO and chairman, for "carrying the water."

Rewey says the Mustang program was informal at first. After the early gatherings in Coletti's office, the team migrated to an old Montgomery Ward warehouse close to Ford's world headquarters.

"It wasn't what you'd call an authorized program at the time," Rewey says. "They were clever enough in their design changes to bring the car out with a whole different feel. Alex took a pretty long look at it and told them to proceed, and we did. It was rough for the whole team when this thing was being developed behind the curtain."

The reason for the secrecy: Some at Ford thought retooling the old Mustang was a waste of money.

Will Boddie, SN-95 program leader, told USA Today in 1994: "Some very important people, who shall remain nameless, said we could never do it."

Ultimately, the team designed a car on a reworked version of the Fox platform that was about 80 percent new. The team had three designs: a conservative design named Bruce Jenner, an aggressive one dubbed Rambo and an in-between design called Schwarzenegger.

The Schwarzenegger design emerged victorious in October 1990. Soon after, the SN-95 program became official with a $700 million budget, $200 million over the original target -- the only goal the group failed to achieve.

The team grew to about 450 people. They worked on the car mostly isolated from other Ford programs. Coletti wanted the team to focus solely on the Mustang.

Team Mustang went out of its way to include Mustang purists.

Says Coletti: "We worked very heavily with the Mustang Club of America. ... Once we knew the hard-core guys were satisfied, we knew the car was going to be a hit."

Meanwhile, the fwd car that almost became the Mustang, the Ford Probe, was introduced in 1988.

Many predicted the more modern Mazda-based machine would quickly eclipse the Mustang. But that never happened. The Mustang outsold the Probe every year until the Probe was discontinued in 1998, selling just 3,058 units that year.

Against the odds, the classic Mustang had survived.

How Lucid brought the Air Pure EV in for under $90k

When the Mustang almost died

How Lucid brought the Air Pure EV in for under $90k

In Detroit, new thoughts on what to do with doors