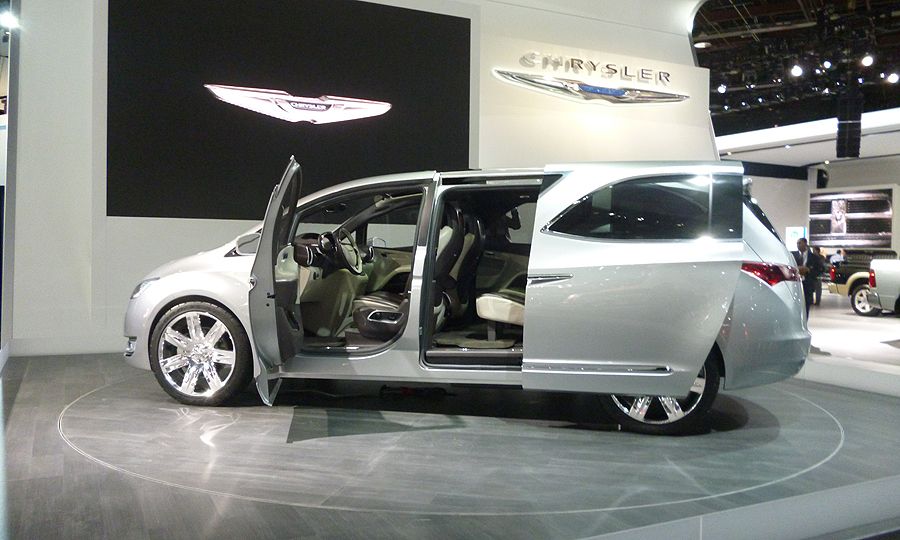 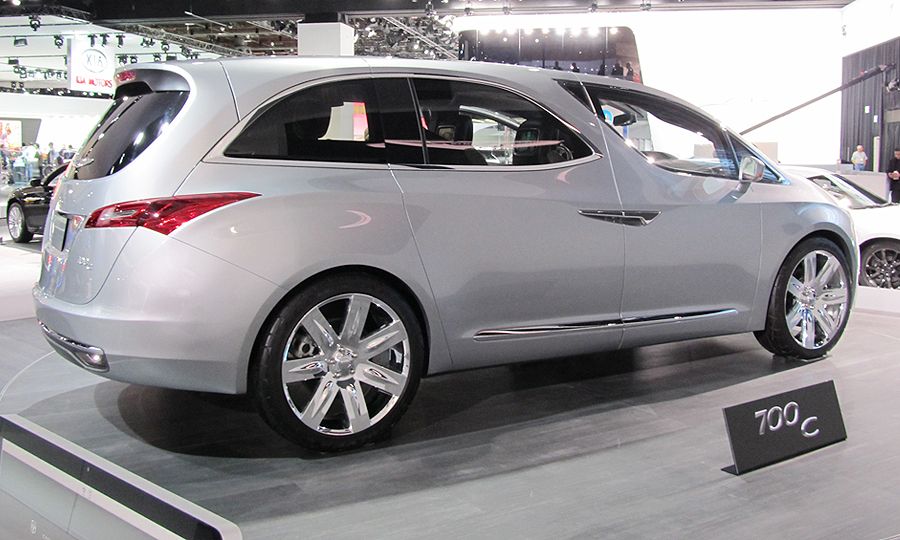 The 700C styling execution is one of several the automaker has created. 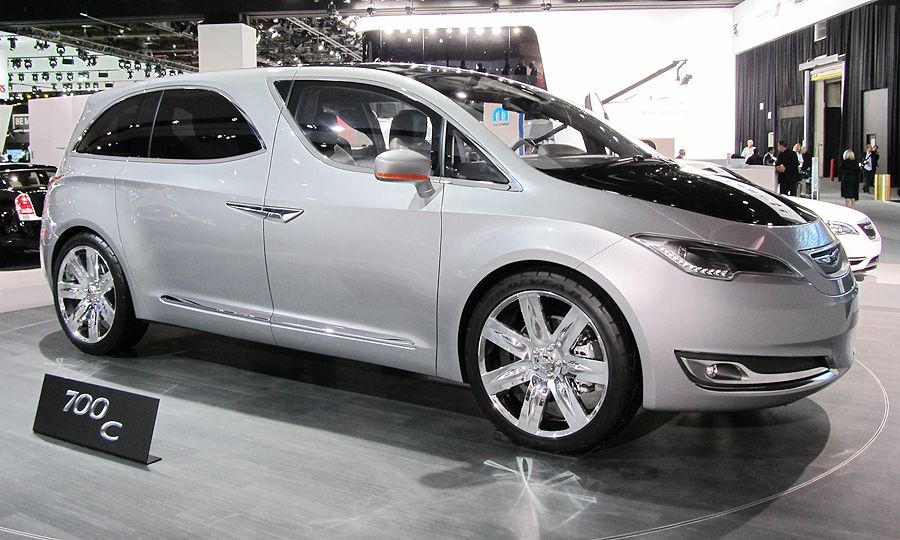 The Chrysler 700C, which was just revealed at the Detroit auto show last week, was a striking example of the unconventional thinking about minivans in Chrysler's studio.

Editor's note: An earlier version of this story incorrectly identified the top-selling minivan in 2010. It was the Chrysler Town & Country.

DETROIT -- Almost 30 years after the minivan was introduced, after attacks from all sides, Chrysler Group LLC remains on top.

Now, CEO Sergio Marchionne will have to decide how best to sustain the success.

So far, the moves made by Marchionne, who is preparing to merge Chrysler with majority owner Fiat SpA, have paid off.

The choice he faces now: whether to merge Chrysler's two remaining minivans into one and whether to dramatically redesign one or both.

Either way, Marchionne and his dealers are committed to Chrysler's signature product.

"I don't care if the minivan market shrinks as long as I'm King Kong in it," said Chuck Eddy, a Chrysler dealer in Austintown, Ohio. "That is Chrysler's attitude, too. The minivan is here and the minivan won't ever go away."

It's one of the longest runs atop a vehicle segment in the United States, along with the 35-year pickup reign of Ford Motor Co.'s F-Series line.

The long-lasting supremacy, along the lines of Coca-Cola and Kleenex, has made the minivan a symbol of the company.

"When people think Chrysler, is minivan a product that comes to mind? The answer is 'absolutely,' " said Alexander Edwards, president of the automotive practice at San Diego-based Strategic Vision, a marketing and branding company. "Most everybody that is in the minivan segment recognizes Chrysler as the creator."

Chrysler has kept the title despite an onslaught of entries from Ford, Toyota Motor Corp., Honda Motor Co. and the predecessor of General Motors.

Ford and GM eventually quit the segment, and Chrysler has claimed at least 40 percent of the U.S. minivan market every year since 2007.

Marchionne is closing in on deciding whether Chrysler still needs two entries for the U.S. minivan market. He led a complete overhaul of Chrysler's lineup in the 19 months after its U.S.-backed bankruptcy in 2009, introducing 16 new or refreshed models.

The Jeep Grand Cherokee and Chrysler 300 sedan have drawn praise from critics, including Consumer Reports.

The revamp has led to 11 months of U.S. sales gains exceeding 20 percent and made Chrysler the biggest gainer of market share through April. Deliveries climbed 33 percent in the first four months, boosting market share by 2 percentage points to 11.6 percent.

It was the company's most profitable period since 1998's third quarter. Marchionne reiterated Chrysler's forecast that full-year net income will grow eightfold to about $1.5 billion, from $183 million in 2011.

With its minivans, the company is "studying all options," including eliminating one of its models and then broadening the target market for the other one, said Saad Chehab, president of the Chrysler brand.

Right now, the company aims to sell the Dodge Grand Caravan for less than $30,000 and its Chrysler Town & Country, which has more equipment standard, for more than $30,000.

Marchionne would have to decide which will survive.

"If it is one, you have to look at can Dodge go up to the upper-market world of minivans, and same thing, can Chrysler really go down to capture the markets that Dodge Caravan does," Chehab said. "It's a difficult answer."

Grand Caravans sold for $27,151 on average. Chrysler offers more-generous incentives on minivans than its competitors. The average incentive per Town & Country sold was $3,106 in March and $2,236 for Grand Caravan, compared to Sienna's $1,650 and Odyssey's $974, according to researcher Edmunds.com.

Those four models have accounted for 90 percent of minivan sales so far this year in the U.S., where, over the past decade, many buyers have switched to car-based SUVs, such as the Chevrolet Traverse and redesigned Ford Explorer.

Chrysler has informed CAW leaders that its Windsor, Ontario, plant -- the sole source of minivan output -- won't be overhauled to build a new generation minivan until 2017.

"Some folks have still some concern of the stigma with what the minivan is," Chehab said. "If we resolve the styling element, it would be a big hit whether we stay with one or two vehicles. Even if we do go with two vehicles in the future, we have to continue to separate the brand image."

Chrysler has reason to tread carefully in choosing the fate of the namesake brand's Town & Country and Dodge's Grand Caravan.

For all the shrinking the segment has done since its 2000 sales peak of 1.37 million deliveries, automakers sold 472,398 minivans in the United States last year.

Minivans represent a significant portion of Chrysler's sales. The Town & Country and Grand Caravan accounted for 15 percent of the automaker's 1.37 million deliveries in the United States last year, according to Autodata Corp.

"Buyers are still in a somewhat more pragmatic head space than they've been in the past," said Ed Kim, an analyst at industry researcher AutoPacific Inc. in Tustin, Calif. "Vehicles like minivans therefore have the potential to experience something of a small resurgence. It's practical, functional transportation."

Chrysler sold a combined 84,152 Town & Country and Grand Caravan minivans this year through April, a 21 percent increase from a year earlier, according to Autodata.

The gain outpaced the 5 percent sales rise by Honda's Odyssey and the 9.2 percent drop for Toyota's Sienna, according to the Woodcliff Lake, N.J.-based researcher.

The Grand Caravan also is on pace to help Chrysler reclaim minivan leadership on an individual-model basis for the second time since 2007. Odyssey was the leader in 2008 and 2009, and Sienna topped the minivan market last year. Town & Country was No. 1 in 2010.

Chrysler maintained sales leadership because their minivans were cheaper and because of the company's reputation as inventor of the segment, he said.

The factory was scheduled to close for 10 weeks beginning in October 2013 to be overhauled for making the next-generation minivan, said Rick Laporte, president of the CAW Local 444, which represents workers at the plant.

The automaker told the union that down time has been pushed back to 2017, Laporte said in a phone interview.

That forced the CAW to delay bargaining with four supplier plants in Windsor that provide instrument panels, tires and rims, axles and front-end modules until Chrysler provides the union with more information about future product, he said.

If Chrysler pares its lineup to one minivan, it would leave the U.S. market with six entries in the segment, compared with 22 in 2004, according to researcher R.L. Polk & Co.

Chrysler told Margaret Zewatsky, a product manager for Polk, at the Detroit auto show in January that 2012 will be the last model year for the Dodge Grand Caravan, she said. The automaker once marketed five minivans, including Plymouth models.

The 700C, shown at the Detroit auto show in January, was designed to serve as a starting point for improving the styling of Chrysler's minivans.

Chrysler showed a concept minivan called the 700C at the Detroit auto show that was a starting point for improving the styling of the company's minivans, Chehab said.

The concept's design was more swoopy than the box-shaped Town & Country or Grand Caravan.

The pillar between the 700C's leaf-shaped side windows sloped back diagonally to the roof. Automotive News, an industry trade publication, called the concept a "train wreck," with a "snoutlike hood" and "goofy proportions."

Not all aspects of the 700C will make their way into production, Marchionne told reporters at the National Automobile Dealers Association's convention in February.

"The oval window in the back was not a big hit," he said. Chrysler will introduce a "completely overhauled" minivan architecture by 2014, Marchionne told reporters on April 30 in Detroit.

The minivan segment has been limited by its reputation as a favorite of soccer moms who demand utility features such as extra storage, low cabin-entry points and DVD players. "People buy it because they need it," Chrysler's Chehab said.

Americans like Anna Chiang, a mother of five under 8 from Rolling Hills Estates, Calif., don't want to see minivans like Chrysler's go extinct.

Chiang and her husband, Mason, bought a new Town & Country in the past month to replace their 2005 Honda Odyssey.

While they looked at a Chevrolet Suburban while shopping for a new vehicle, the large SUV had less storage space and sold for thousands of dollars more.

"I couldn't see myself spending all this extra money for a vehicle that's not going to suit all my needs," Chiang said in a phone interview. "The minivans suit our lifestyle. They're lower to the ground so our kids can enter and exit. It's roomy and accommodates all of us as a family."

While there may still be a place for the minivan in the U.S. market, Edmunds.com analyst Jessica Caldwell said, the Santa Monica, Calif.-based researcher's data suggests the segment may still end up shrinking further.

"The way the volumes are now, it's a hard case for Chrysler to produce two minivans, especially when they have so many other plans," Caldwell said in a phone interview. "Chrysler is going to be changing a lot in the foreseeable future. You can only put so many resources in certain places."

Eddy, the Ohio dealer, said there was a need for two minivans when Chrysler had fewer of its retailers carrying all of the company's brands under one roof.

He would like to see Chrysler take the spending that goes into producing and marketing a second minivan and shift it to investing in a new product such as a small SUV or crossover.

"It ties up floor space, dollars and blacktop when you've got a row of Caravans and row of Town & Countrys and you're trying to have a lease point, price point and incentive package that works for each vehicle," he said. "If you go to one vehicle, it frees up the ability to market and spend dollars on another product."

Don't write off the Dodge Grand Caravan just yet