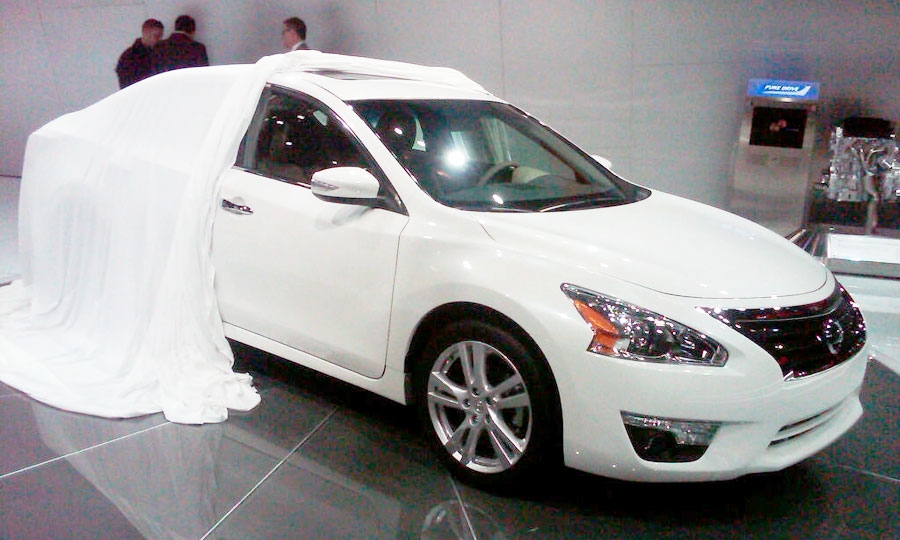 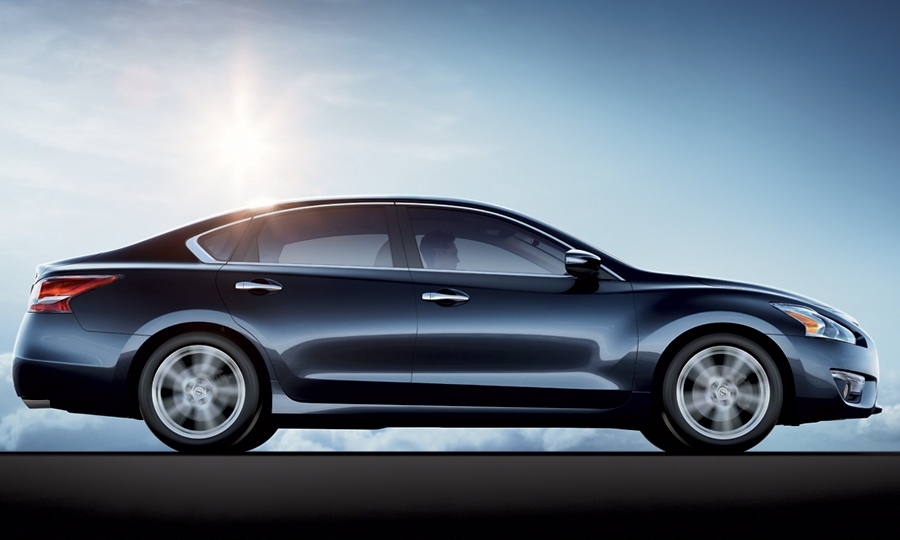 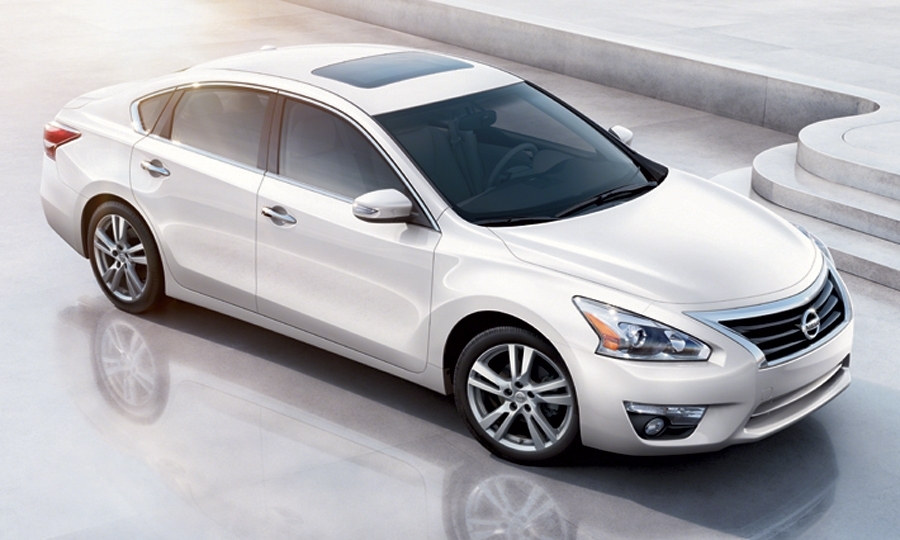 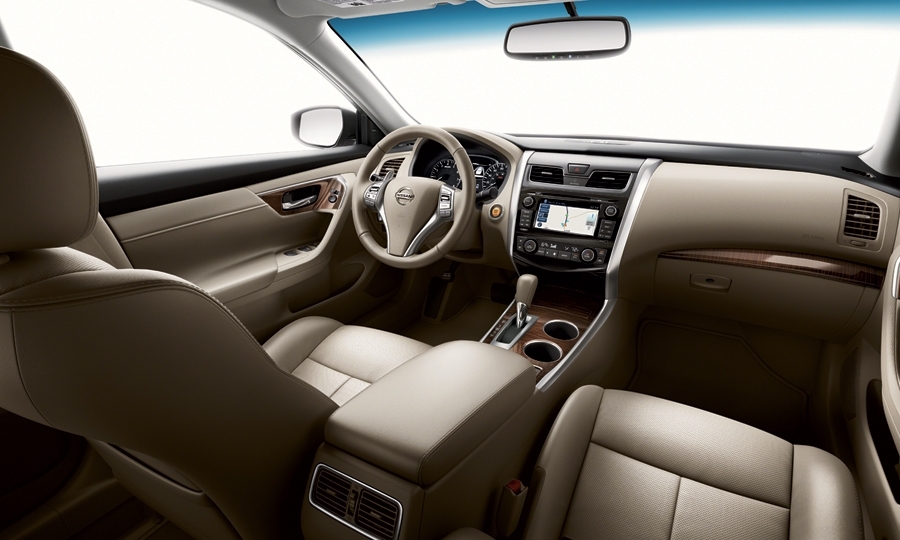 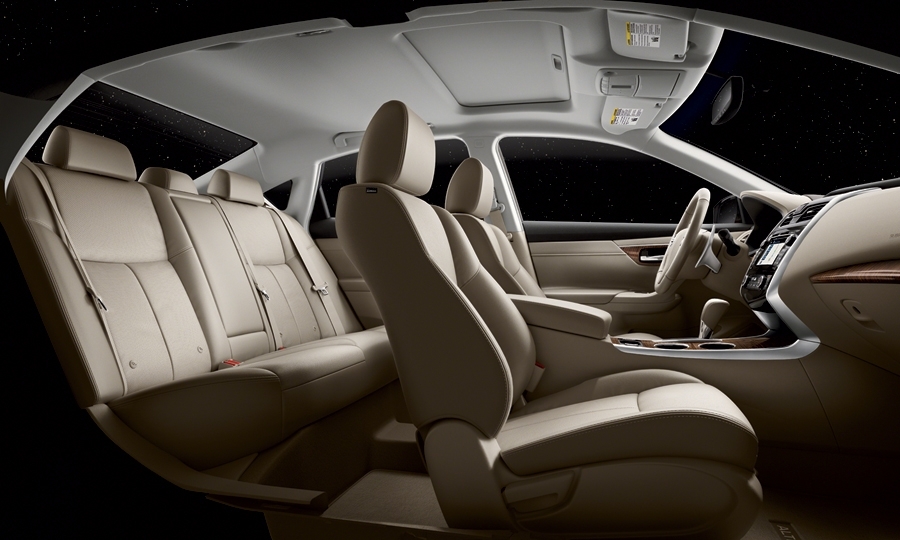 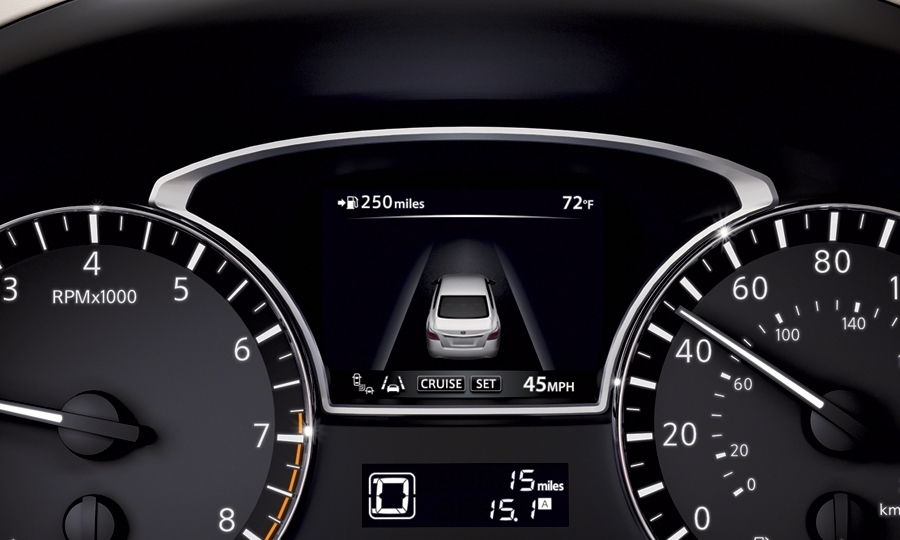 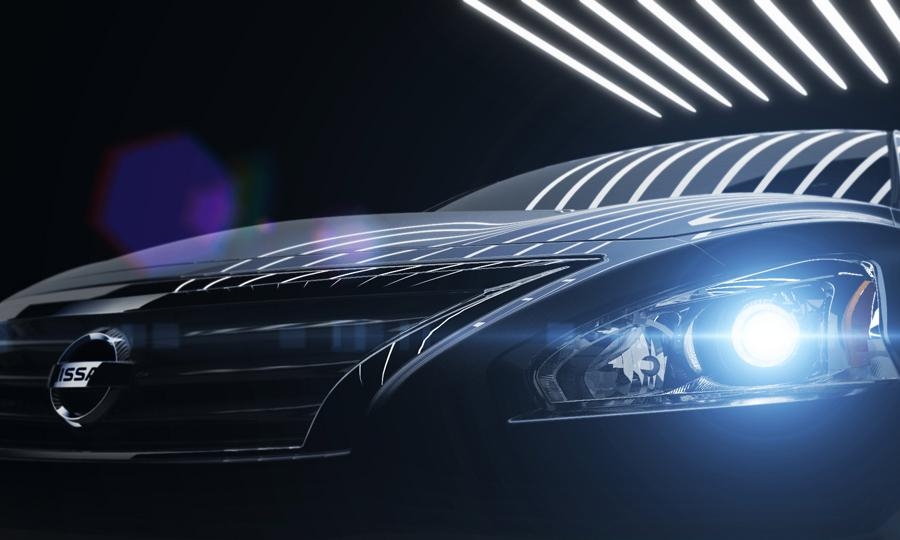 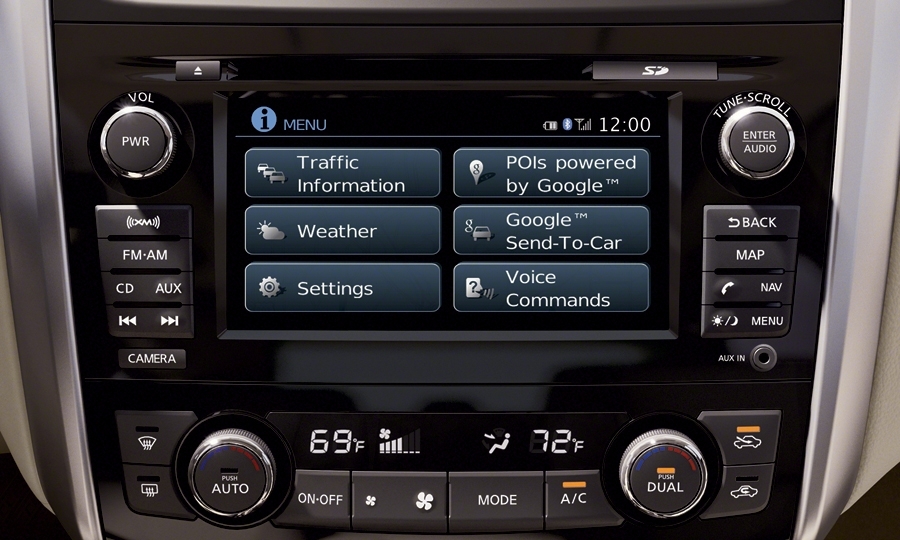 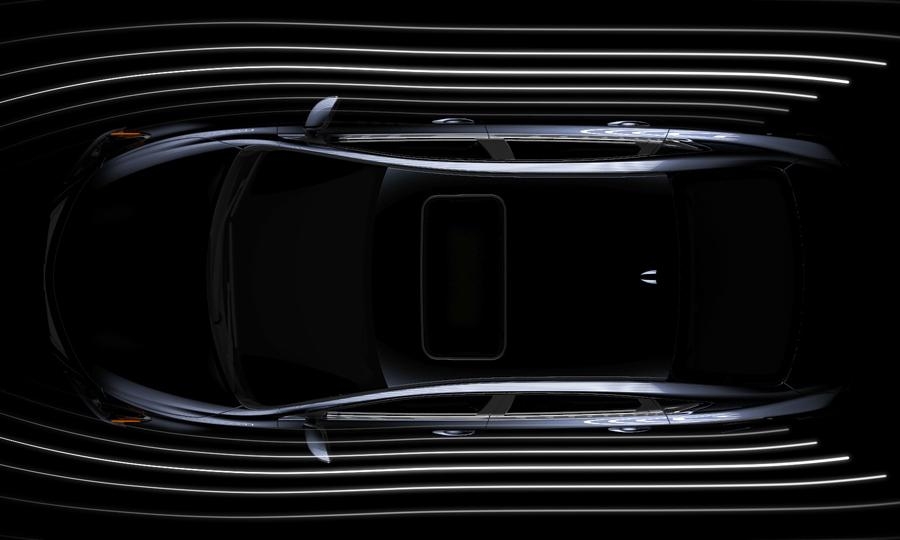 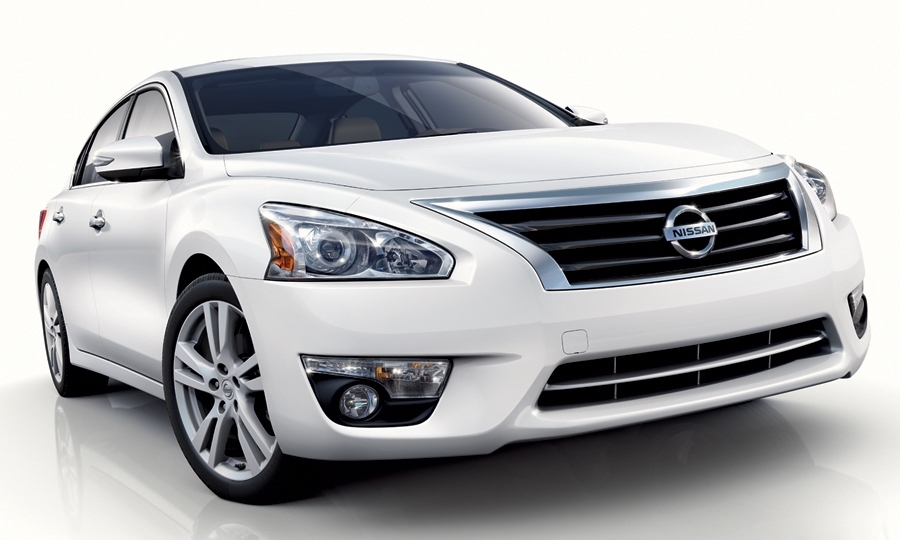 To entice customers into advance orders for the new Altima, Nissan will throw in scheduled maintenance for three years or 45,000 miles. 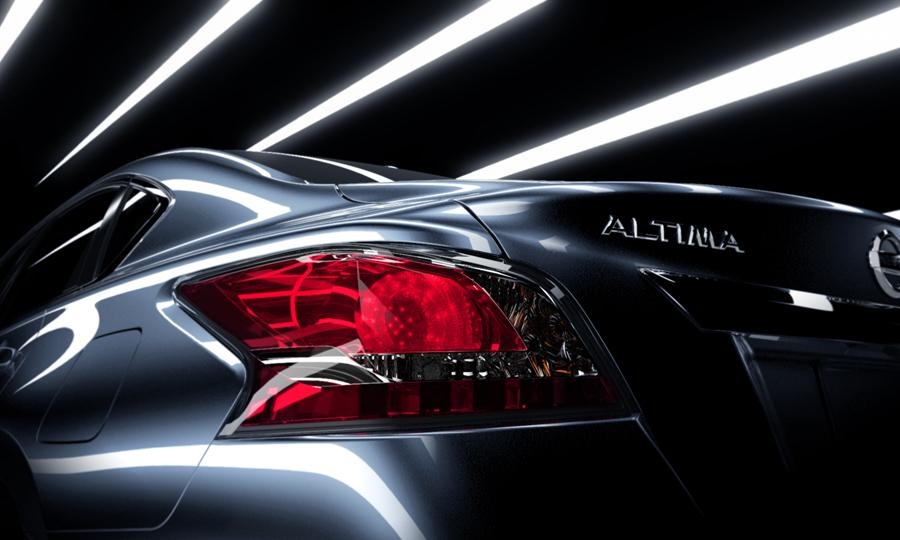 NEW YORK -- The Nissan Altima -- the nation's No. 2-selling car -- is getting a luxury-inspired makeover for 2013 to attract more U.S. consumers to the family sedan.

Banking on a U.S. economy that is entering better times, Nissan Motor Co. plans to pitch a more affluent image with the redesigned Altima -- not in price, but with enhanced fuel economy, luxury amenities and new technology that includes NASA-inspired seats -- when it goes on sale in June.

It is a gamble for Nissan, a brand known for edgy design, as it strives to build on the Altima's rising sales and enhance its U.S. market share amid an onslaught of restyled mid-sized rivals.

"We're not moving the Altima into a new segment," said Brian Carolin, Nissan North America senior vice president for Nissan and Infiniti sales and marketing. "We're refining it to create the perceived image of a much more upscale car."

The 2013 Altima comes at a critical juncture for Nissan.

Nissan CEO Carlos Ghosn, who introduced the new Altima today at the New York auto show, is pushing the Japanese automaker to grab 10 percent of the U.S. light vehicle market, up from 8.2 percent last year and 9.3 percent so far in 2012.

It goes into production on May 14, and it will be assembled in Canton, Miss., and Smyrna, Tenn., for the United States and 45 overseas markets.

The relatively short period between its public and showroom debuts is designed to maintain market momentum for the Altima and draw interest as competition in the mid-sized market heats up.

The styling for the new Altima has evolved only slightly, with deeper creases along the sides and across the trunk. The headlights and running lamps have been separated in front to echo the look of luxury vehicles. The door handles are now made of chrome, and chrome now encircles the car's grille and side windows.

But the car's content signals Nissan's ambitions to capture a bigger slice of the surging family sedan market.

Nissan said the next Altima will offer these features:

-- Active understeer control, an automatic steering intervention system that until now has been available only on Infiniti's luxury flagship M45 sedan.

-- A combined blind-spot and lane-departure warning system that also detects moving objects behind the Altima when the car is in reverse. Cockpit controls allow the driver to change the system's camera angle for a different view of the detected object.

-- A 3-D Drive-Assist display visible directly through the steering wheel rather than positioned in the center console. Vishnu Jayamohan, Altima product planning specialist, said positioning the information system in the driver's line of sight is intended to help keep the driver's eyes on the road. He cited research that shows looking to a center console takes 265 milliseconds, compared with 25 milliseconds to glance at an image behind the steering wheel.

-- The 3-D Drive-Assist also displays turn-by-turn navigation, audio information and caller ID for hands-free telephoning. The vehicle allows drivers to turn on a recorded message to say that they are busy driving and can't take the call.

Over the past two years, Altima has become the nation's second-best-selling vehicle, behind the Toyota Camry, up from fifth place or lower among the market's top 10 cars.

In March, it came within 1,518 sales of overtaking the Camry as the No. 1 car, even though the Altima is at the end of its product cycle.

The current Altima coupe body style will remain in production through the 2013 model year, Nissan says.

Overall, the Nissan brand's share of the U.S. light vehicle market jumped to 7.4 percent last year from 6.9 percent in 2010 as rivals Toyota and Honda suffered from inventory shortages after the March 2011 earthquake and tsunami in Japan and later flooding in Thailand.

But the competition is reloading, too.

Honda Motor Co. will soon unveil an all-new Accord. Volkswagen's redesigned Passat is gaining ground and Chevrolet is rolling out a new Malibu. New mid-sized sedans are also coming from Ford and Mazda over the next year.

The Hyundai Sonata -- the freshest model in the segment just nine months ago --will become one of the oldest by fall. It is scheduled to be redesigned for the 2014 model year.

"Some auto companies have been taking content out of their cars and using less expensive materials," Carolin says. "We're going the other direction. With the new car, we've got an opportunity to build on what we've accomplished so far. We've already shown the Altima to dealers and their impression is that it is a cut above what the Altima has been.

"We've defended the direction of this model through the economic crisis, to keep the materials and the technologies we want to use. This is our highest volume product. It's critical to the franchise."

Editor's note: An earlier version of this story gave an incorrect estimate for the highway fuel economy of the new Altima. It is 38 mpg.