Battery startup Our Next Energy closed its series A funding round, raising $25 million.

Range anxiety in the rearview?

An Interview with Our Next Energy (ONE) CEO, Mujeeb Ijaz

A Detroit-area startup whose battery architecture could someday give electric vehicles more than 750 miles of range is getting a $25 million boost from a group of high-profile investors.

Our Next Energy Inc., said Monday, Oct. 18, that it raised the money in a series A round that closed Oct. 1. Leading the round is Breakthrough Energy Ventures, the climate-minded venture capital fund started by Bill Gates and supported by the likes of Jeff Bezos and Richard Branson.

"They're an important backer that can give us long-term capital," Our Next Energy CEO and founder Mujeeb Ijaz told  Automotive News .

"They're focused on finding alternate energies, as their name implies, and seeking out disruptive technologies. Unless you're at a level that's significant and can scale, they don't invest. So I'm very excited. ... We wanted to recruit a particularly strategic group of investors that would help our company build a great foundation and grow."

Others participating are Volta Energy Technologies, BMW i Ventures, Flex Ltd. and Assembly Ventures. The venture capital group brings expertise in supply chain management, battery storage and chemistry composition. Together, that expertise perhaps raises the profile of a startup that, rather than beginning on the West Coast, is in the backyard of the traditional auto industry.

"It really exemplifies the opportunity to create technology that drives the future of mobility here in a legacy center of the industrial West," said Chris Thomas, co-founder and partner at Detroit-based Assembly Ventures. "We want to thread amazing entrepreneurs to the people and places who know how to produce at volume, so the fact we're doing this here — not to be too trite — is heartwarming. We can create the future right here rather than outsourcing it to other places."

When Ijaz began working on EV technology in the 1990s, he believed 100 miles of range was sufficient for ordinary car buyers because the average driver needed less than half that number for their daily commutes.

Now Ijaz believes he has developed battery technology to make trips of up to 800 miles per charge possible, and he has the financial backing to embark on transforming the technology into a commercial product.

He says the funding infusion enables the company,  founded in July 2020 , to push forward on building its first battery factory, continue hiring and conduct further R&D on its next-generation battery product.

Those efforts could solve the quandary of the majority of customers being most interested in a vehicle that covers not just their daily needs, but that occasional long trip.

"No one really wants charging stations to be the answer en route," Ijaz said. "They want a vehicle that goes where they want it to go. So we're going after that last percentage point."

EV battery startup Our Next Energy scaling up quickly, to open new HQ in Novi 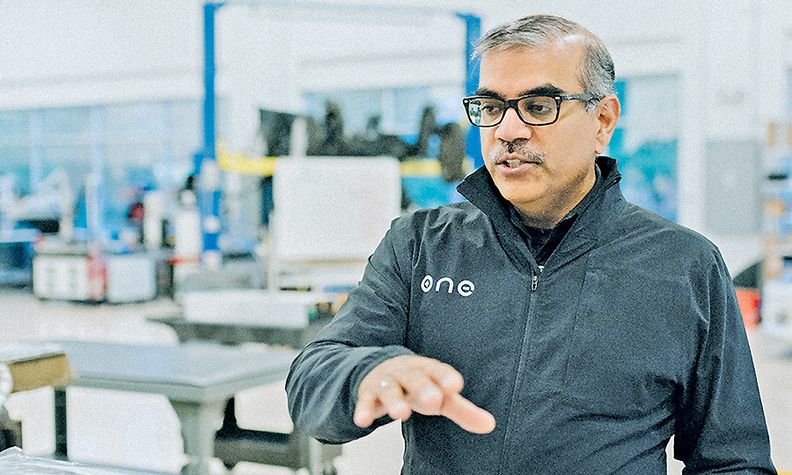 Ijaz: Can move ahead on factory.

To do that, Our Next Energy is not so much creating a battery but marrying two complementary ones. A hybrid battery approach allows Ijaz and his engineering team to combine a workhorse battery that handles the daily drives and frequent charging with another designed to stretch range on those occasional long hauls. Underlying chemistries for each battery are tailored for their respective tasks.

The second battery, which the company calls its Gemini battery, is the linchpin for range breakthroughs. It remains in the research phase, and Ijaz says pre-samples will be available next year. Later, Our Next Energy intends to seek an automotive partner to further flesh out passenger vehicle applications.

"I've been in batteries for 30 years, and I don't like things that don't have data behind them," said Ijaz, who previously held executive roles at Ford Motor Co. and A123 Systems. "But I really do think we've demonstrated enough that we know we can do this. The next big thing is to do it methodically and not recruit the market before the technology is ready."

The first battery, on the other hand, is ready now. That  one, called Aries, is designed for durability  and to avoid thermal runaway conditions. It is scheduled to enter production by the end of 2022, assembled in partnership with an unnamed Tier 1 supplier in Michigan.

Aries is made up of lithium iron phosphate. Notably, it does not contain nickel or cobalt, two materials found in many batteries. Ijaz avoided them because he foresees a supply chain pinch that will make them difficult to find and will also increase prices.

That strategy appealed to Thomas, who is concerned about relying heavily on raw materials found outside the U.S. "We need to ensure that with the inputs, there's no way to have a bottleneck that turns on and off outside our control," he said. "This focus on ensuring we're looking at abundant chemical compositions and rooting out cobalt — which for me is not only a question of availability but one of ethics and human rights — we're excited about that being in their DNA from day one."

Even without being paired with Gemini, Aries has its first customer, which has booked 6.3 gigawatt-hours worth of battery orders over the first five years of production, Ijaz says. While he's not disclosing the customer yet, he says it operates in the delivery truck space, a general market that he is eager to reach.

"The delivery truck market is the most receptive to moving at the speed at which we want to go as well," Ijaz said.

In tests with the customer, he said, Aries alone offered 88 percent more range than the conventional battery pack the company had been using in its trucks. With overall costs of vehicle operation already favoring EVs, adding substantial range sealed the contract, he said.

"What's been missing is the price point they need to hit, and fundamentally, the solutions to hit range targets where they're not really in a predicament and barely making their routes," Ijaz said.

"Now they can let their customers know they have this option, and it grows their market even further. Accessibility to the market is linked to range. It's the ultimate truth of electric vehicles."