These young dealership leaders have dealt with the challenges of a pandemic and then topsy-turvy supply and demand amid a global microchip shortage.

Two major crises in as many years have tested the mettle of this year's crop of Automotive News 40 Under 40 honorees.

The coronavirus pandemic and a lack of new-vehicle inventory because of the global microchip shortage have forced these young auto retail leaders to think on their feet and adapt, while learning valuable lessons.

While the effects of the pandemic, for the moment, appear to have eased in the U.S., consumer demand for vehicles is strong at a time that automakers are struggling to fill showrooms.

"Our lot has never looked so empty," said Paige Fox, vice president at Fox Auto Team in El Paso, Texas, adding that the store regularly gets calls asking whether it has closed. Despite that, business has been great, Fox said. "It could be even better if we had the inventory," she said.

The situation is similar at stores across the U.S.

"We're a volume dealer," said Erikka Tiffani Wells, sales manager at Town Center Nissan in Kennesaw, Ga. "We sell over 200 cars a month. It's been quite scary to see our lot [kind of] empty."

Wells said her store rearranges its dwindling vehicle stock on the lot to give it the appearance of being full.

That's just one of a variety of strategies the 40 Under 40 honorees have implemented.

Fox said her stores are preselling inventory, so the retailer can offer customers what they want — even though it may not arrive until September.

"We're able to lock down that deal, get a deposit, do everything, except have the vehicle," Fox said. "Preselling has been a huge savior for us." 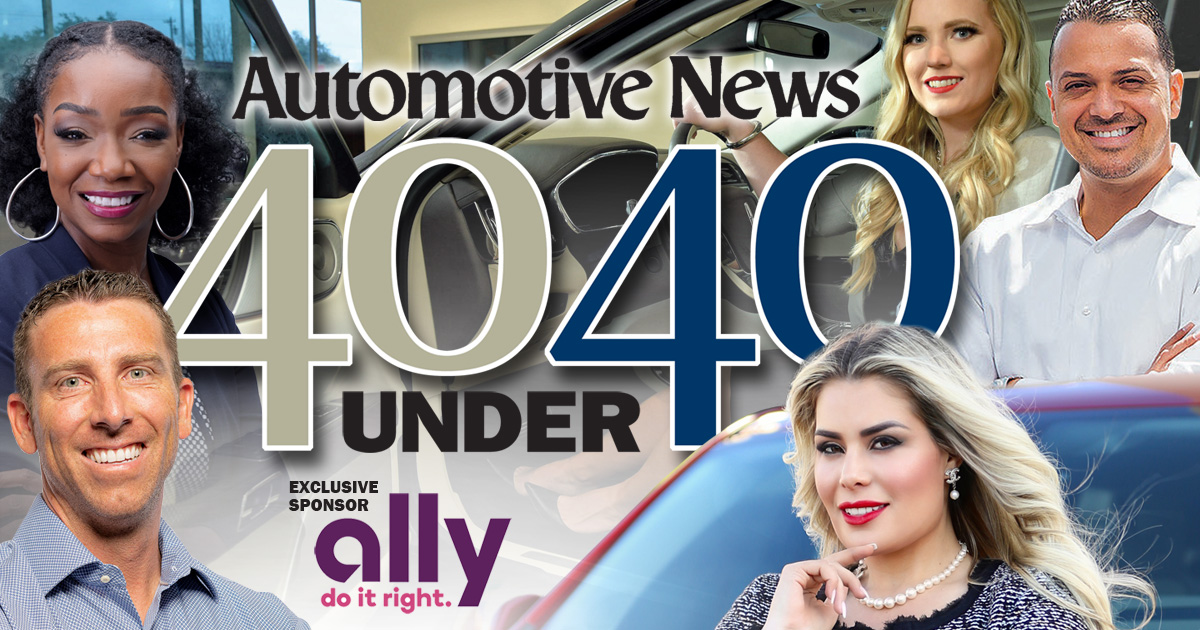 "It's just taking action. You have to be one step ahead of the problem. You hear something's coming. OK, if it does come, what are we going to do about it? So, just being prepared." -- Xavier Cortes, owner, Bellingham Nissan, Cortes Auto Group, Bellingham, Wash.

"One of the biggest things I learned was to take the monkey off my back and hand it to somebody else. It's being able to put the right people with the right skill set in charge of handling the right things. By doing that, I have found that we've seen such growth." -- Matt Raymond, director of digital operations, Team Auto Group, Salisbury, N.C.

"It's just making sure we can survive until the new inventory comes back. Luckily that's where our diversification comes in. We have the service centers and quick lanes and are making sure we keep it going." -- Shelby Reed, president, World Class Automotive Group, Texas

"These back-to-back crises have been a great time to reflect on how we conduct business and a chance to embrace the future of business. It's also given us a chance to hone our skills and continue to improve ourselves." -- Mitchell Harris, corporate director of operations, Shaker Auto Group, Connecticut and Massachusetts

"We've learned not only to be flexible, but to be creative in our strategies. We have a great team, and it's been proven though each crisis. The quality of our inventory and employees has shown to be most important over the quantity." -- Katie Segrist, sales manager, Mercedes-Benz of Cincinnati

"You have to believe in the people that you have working for you. You have to listen to them, and, most importantly, you have to empower them. I believe they'll do more when they're empowered and led by vision." -- Paul Gomez, general manager, Audi Lakeland in Florida

Colton Ray, chief merchandising officer at Walser Automotive Group based in Minneapolis, said his group, too, is focused on ordering vehicles to customers' desires.

"That's not as immediate as most people are used to when purchasing a vehicle," Ray said, adding that Walser nonetheless has been steadily submitting factory orders to customer specifications.

Above all, customers remain king for these retailers — whether that means trying to source the vehicle a customer wants, even if it's still at a factory, or driving a potential purchase straight to a customer's doorstep.

"We learned how to make life easy for our customers," said Joey Falcon, managing partner at Jerry Ulm Chrysler-Dodge-Jeep-Ram in Tampa, Fla. "Whatever it takes to make sure the customer is taken care of has taken a completely different shape and definition."

That could include delivering a vehicle to someone's home for a test drive or picking up vehicles for service, he said.

At the same time, dealerships have increasingly turned to used vehicles to fill more immediate needs.

Chris Marhofer, COO of Ron Marhofer Auto Family in Cuyahoga Falls, Ohio, said his group has always had a heavy emphasis on used vehicles, selling almost twice as many used cars than new. As the new-vehicle shortage loomed, the group doubled down on that strategy, Marhofer said.

"We looked at it like, 'All right, if we don't have some new cars to sell, let's be damn sure that we have used cars to sell,' " he said.

To land used inventory, Ron Marhofer Auto Family focused on acquiring cars from customers. Managers told salespeople to buy every trade and were willing to spend more per vehicle to seal those deals. The group also reached further back — as far as 24 months — into its portfolio of lease customers, and vehicle buyers scoured the classifieds such as Facebook Marketplace or Craigslist.

Chuck Anderson Ford also had a preexisting focus on used-vehicle sales, said Nick Anderson, the Excelsior Springs, Mo., store's general manager. But the current inventory crisis has forced it to shift its strategies.

It has been the right move. The store's vehicle turn rate has gone up dramatically, Anderson said, and it has helped feed the body shop, parts and service departments and, ultimately, the dealership's bottom line.

Through this year's inventory crunch, the dealership leaders Automotive News spoke with for this story said their stores have not had layoffs. Some have even had to add staff.

And they see a light at the end of the tunnel, whether it comes this summer or later in the year. They know that ups and downs are part of the business, but new lessons have been learned.

"Always be evolving," said Andrew Riffee, chief marketing and technology officer at Dimmitt Automotive Group in Clearwater, Fla. "That's one of the things that the pandemic has really presented. ... Every 30 days has been obviously a different challenge to face and a different hill to climb. So we've become very, very nimble."

Lindsey Trett, director of service process implementation at Walser Automotive Group, said the crises have taught her to constantly think ahead.

"If we can be fluid, be resilient, be different, that's where we believe our success can still be achieved, and we can still stand out in the good, the bad, the hard times."

Dealer leverages personal success to lift others
Sponsored Content: Making the case for video edge in the connected car